Identification and Characterization of Tyrosylprotein Sulfotransferase from Human Saliva

Tyrosine sulfation, a posttranslational modification involved in the processing of secretory proteins, is the covalent attachment of sulfate to the hydroxyl group of the tyrosyl residues in peptides and proteins. O-sulfation of the tyrosine residues has been the subject of several studies on the posttranslational modification of proteins [2]. This modification occurs in the trans-Golgi, the compartment involved in the maturation and sorting of secretory proteins and peptides including cholecystokinin [3], fibrinopeptide B [4], gastrin [5] phyllokinin [6], leucosulfakinin [7], C4 complement [8], hirudin [9], P-selectin glycoprotein ligand-1 (PSGL-1) [10] and chemokine receptor CCR5 [11]. Tyrosine sulfation in these proteins has been suggested to be essential for their biological activity, half-life, and secretion. Sulfation of tyrosyl residues in cholecystokinin is required for its optimal biological activity [12] and in the case of hirudin, tyrosine sulfation increases the binding efficiency to thrombin [9]. In M31 hybridoma cell line, tyrosine sulfation has been shown to serve as a signal for the secretion of IgG [13]. In PSGL-1, tyrosine sulfation is required for its binding to p-selectin [10] and the tyrosine sulfation of CCR5 facilitates HIV-1 entry [11]. Although the significance of tyrosine sulfation in these and several other proteins has been studied in detail, its role in salivary protein is yet to be investigated.

Tyrosylprotein sulfotransferase has been identified in numerous tissues including bovine adrenal medulla [14], rat liver [15], brain [16], gastric mucosa [17], submandibular salivary glands [18] and platelets [19]. In this study, we demonstrate for the first time the detection, isolation and characterization of TPST from human saliva.

[35S]PAPS (2 Ci/mmol) was from DuPont New England Nuclear, EAY (Mr 47 kDa), 5'-AMP were from Sigma-Aldrich. All other reagents were of analytical grade.

Unstimulated saliva was obtained from healthy individuals. The saliva was centrifuged at 6,000 RPM for 30 min and the clear supernatant was separated from sediment containing food particles.

Parotid saliva was collected as described in [20]. Parotid salivary flow was stimulated by means of confectionary which contained citric acid and tartaric acid. The saliva sample of about 10 ml was collected from parotid salivary glands by means of special devices. Protein concentration was estimated by the BCA protein assay reagent kit (Pierce chemical Co). Optimally diluted saliva samples were used for the tyrosylprotein sulfotransferase activity.

The tyrosylprotein sulfotransferase assay mixture contained the following components: acceptor, unsulfated EAY at concentrations indicated in text, 5 µM [35S]PAPS (400,000 cpm), 20 mM MnCl2, 20 mM MES buffer pH 6.8 and saliva (50 μg protein) in a final volume of 50 µl. Assays were initiated by the addition of the enzyme and incubated for 30 min at 37°C. The reactions were stopped by spotting 35 µl aliquot of the reaction mixture on a 2.4 x 2.4 cm Whatman No. 3MM filter paper [15]. The papers were washed three times for 15 min in 10% trichloroacetic acid/10 mM Na2SO4 and rinsed 5 min in 95% ethanol. The dried papers were placed in vials containing scintillation solution and counted in a TriCarb-1500 scintillation counter.

Proteins were resolved by SDS-PAGE on a 10% polyacrylamide gel and electrophoretically transferred (20 V for 20 min) to a nitrocellulose membrane (Millipore) by means of a Bio-Rad Semi Dry Transblot apparatus according to the procedure supplied by the Bio-Rad. The section of the nitrocellulose membrane containing the molecular weight standards was cut off and stained with Ponceau S in 45% methanol and 10% acetic acid and destained in water. The membrane was blocked overnight at 4°C with bovine serum albumin (3% w/v). The blot was washed with Tris buffered saline (25 mM, pH 8.0) containing 0.05% Tween 20 and 0.1% BSA and incubated with IgG fraction of rabbit anti TPST antibody for an hour at room temperature. After washing the blot with wash buffer, the membrane was further incubated with alkaline phosphatase conjugated goat anti-rabbit immunoglobulin G (1:5000) for an hour. The substrate for alkaline phosphatase was consisted of the p-nitro blue tetrazolium and 5-bromo-4-chloro-3-indolyl phosphate.

Immunoprecipitation of the TPST present in saliva was carried out in 1.5 ml microcentrifuge tubes using TPST antibody, as described in [1]. Briefly, different concentrations of immune and preimmune sera (1:1000 dilution) were added to 100 µl of saliva and the mixture was incubated at room temperature for 4 h. After incubation, 30 µl of Protein A sepharose (25%) was added. Following overnight agitation at 4°C, Protein A sepharose beads bound to antigen-antibody complexes were pelleted by centrifugation and the supernatant was used for TPST assay.

Purification of tyrosylprotein Sulfotransferase from saliva by Immuno affinity Chromatography

The IgG fraction of rabbit anti-TPST was coupled to CNBr-activated Sepharose 4B beads. About 75 mg of IgG fraction was coupled to 7.5 ml CNBr-Sepharose 4B as described earlier [22] and the beads were stored at 4oC with addition of preservative. The amount of protein coupled to beads was measured by estimating protein in the supernatant before and after coupling. Two ml beads were packed in a mini column and equilibrated with 20 mM MES pH 6.8. Five ml volumes of saliva was applied to the affinity column and equilibrated for 30 min. The column was washed with 10 volumes of equilibration buffer. The bound enzyme was eluted with Gly-HCl buffer pH 2.7 and pH was raised immediately with 1.0 M Tris. The fractions were further tested for the presence of enzyme by dot blotting. The enzyme activity was assayed and the purity of the enzyme was examined staining the polyacrylamide gels with silver.

The presence of tyrosylprotein sulfotransferase activity was observed in human saliva using EAY as sulfate acceptor and [35S] PAPS as sulfate donor. The clear supernatant of normal and parotid saliva showed TPST activity. The tyrosine sulfation increased proportionately with increasing concentrations of saliva protein up to 25 µg (Figure 1). The enzyme activity increased with increased incubation time up to 30 min and reached its maximum at 60 min (Figure 2). The effect of pH on the EAY sulfation by human whole saliva and parotid saliva are shown in Figure 3. Using the MES buffer, the pH optimum for the sulfation of EAY by the two enzymes was found to be 6.8 and significant activity was also observed in parotid saliva at pH 5.5. In the absence of MnCl2, minimal sulfation of EAY was detected. Optimum enzyme activity was detected at 20 mM MnCl2 (Figure 4)

The polyclonal TPST antibodies were also tested for their ability to immunoprecipitate the TPST in the saliva. Antibodies were incubated with the saliva and coupled to protein A Sepharose beads. After centrifugation, presence of the TPST activity was determined in the supernatant by enzyme assay. As shown in Figure 5, with increasing concentration of TPST antiserum in the immunoprecipitated sample, the supernatant showed decreased TPST activity. Almost 80% of the activity was immunoprecipitated with 50 µl of a 1:1000 dilution of antiserum, when compared with the preimmune serum.

Purification of TPST from Human saliva

Purification of TPST to homogeneity from saliva was achieved by immunoaffinity column chromatography. This method resulted in a 25, 071-fold increase in tyrosine sulfating activity (Table 2). The purified enzyme exhibited protein band of 50-54 kDa on SDS-PAGE (Figure 6A) and on immunoblots (Figure 6B) similar to the enzyme obtained from submandibular salivary glands [1]. The 3, 389-fold purification of tyrosine sulfating activity from human saliva to near homogeneity (Table 2) differs from the 140, 000 and 25, 358-fold purification required for adrenal and rat submandibular salivary gland enzyme, respectively, suggesting that saliva represent a better enriched source of this enzyme.

Sulfation represents an important mechanism in vivo for the biotransformation and excretion of a variety of proteins. Upon sulfation some proteins undergo changes in their biological activities to fulfill particular biochemical and physiological needs. Since the first description of a TPST activity, the enzyme has been reported in various tissues in bovine adrenal medulla [14], rat [15], and PC12 cells [23]. However, there are no reports of its presence in secretion. In this paper, the existence of tyrosylprotein sulfotransferase activity was demonstrated in human whole saliva and parotid saliva using 35S-PAPS as co-substrate for sulfation. Using the acidic, synthetic polymer, poly Glu6, Ala3, Tyr1 (EAY), Domiano and Roth [15] demonstrated a fairly wide-tissue distribution of tyrosylprotein sulfotransferase in the rat. Later, Sundaram [18] have characterized the enzyme present in the rat submandibular salivary glands. Some of the properties of human salivary tyrosylprotein sulfotransferase described here appear to be similar to those reported earlier for this enzyme in other rat tissues. As shown in the Figure 4, the human salivary tyrosylprotein sulfotransferase exhibited optimum pH at 6.8, which is similar to sulfotransferase reported in rat submandibular salivary glands [18] and other rat tissues [15,17]. However, the enzyme isolated from rat submandibular salivary glands displayed pH optimum of 6.2 [18] and the pH optimum observed for rat brain was 5.8 [24]. The solubilized enzyme from adrenal medulla has a pH optimum between 6.0 and 6.5 [14]. Human salivary tyrosylprotein sulfotranferase activity was stimulated by the divalent cations Mn2+, Ca2+ and partially by Mg2+ and was inhibited by EDTA. The enzymatic activity mediating the sulfation of proteins in PC12 cell was stimulated by the presence of Mg2+ and Mn2+ and inhibited by EDTA [14]. Both Mn2+ and Mg2+ were equally effective in activating EAY sulfation by bovine adrenal medulla [14] and rat cerebral cortex [16], where as Mn2+ and Co2+ stimulated rat liver tyrosylprotein sulfotrasferase [15]. In contrast, sulfation of an endogenous membrane protein in A431 cell was not inhibited by EDTA [25].

Antibodies raised against the tyrosylprotein sulfotransferase from rat submandibular salivary glands recognized the enzyme present in the saliva and the antibody was also capable of immunoprecipitating the enzyme activity in saliva. SDS-PAGE analysis of salivary tyrosylprotein sulfotransferase isolated from antibody column revealed a protein of 50-54 kDa in silver stained gels. A similar 50-54 kDa protein was observed for TPST purified from bovine adrenal medulla [26], rat liver [22] and submandibular salivary glands [1].

We have identified TPST in human saliva in addition to our earlier reports on its presence in submandibular salivary glands [1]. Although the enzyme activity responsible for tyrosine sulfation was demonstrated several decades ago, very little is known about the function of tyrosine sulfation, particularly, in salivary metabolism. The better understanding of this process needs further studies involving the identification of salivary proteins that are candidates for tyrosine sulfation. In naturally occurring substrates of tyrosylprotein sulfotransferase, the sulfated tyrosyl residues are predominantly surrounded by acidic amino acids [27,28]. These studies suggest that acidic environments are the important determinants for tyrosine sulfation. Salivary statherin is a 43-residue polypeptide which is tyrosine-rich and contains 7 tyrosine residues. The peptide also contains a sequence E-Q-P-L-Y (residues 26-30) suggested for tyrosine sulfation [28,29]. The availability of TPST and antibody will facilitate well-defined studies on the role of this important function in saliva in physiological and pathological conditions.

This work was supported by grant #AA09191 from the National Institute on Alcohol Abuse and Alcoholism.

Enzyme activities were measured as described under Materials and Methods. Values are the mean ± SE of three experiments 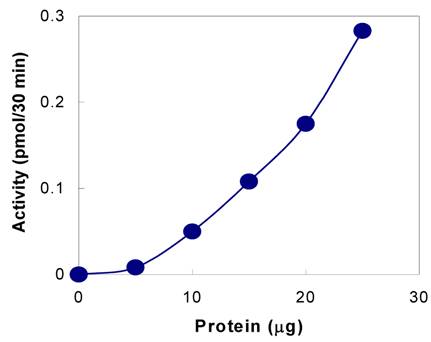 Tyrosine sulfation activity of human whole saliva as a function of time. The tyrosylprotein sulfotransferase activity was measured as described under Materials and Methods except that reaction time was varied 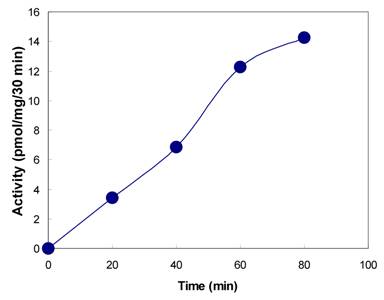 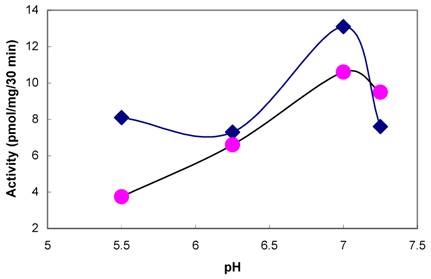 Effect of MnCl2 on tyrosylprotein sulfotransferase of human whole saliva. The composition of the assay medium was described under Materials and Methods except that MnCl2 concentration was varied from 0 to 30 mM 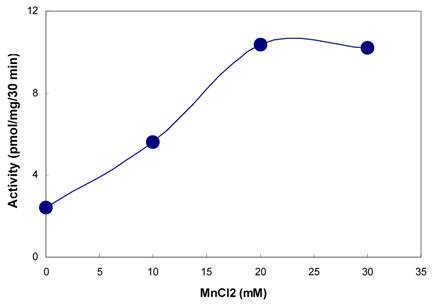 Immunoprecipitation with anti-TPST antiserum. The indicated amounts of anti-TPST antiserum were incubated in a final volume of 100µl with human saliva. The mixtures were further treated and the supernatants assayed for tyrosylprotein sulfotransferase activity as described under Materials and Methods 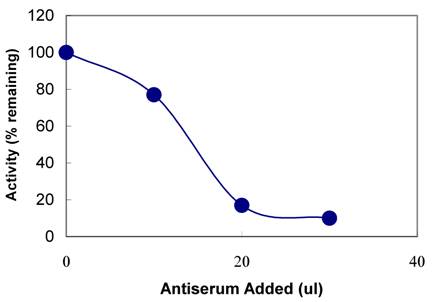 Western blot analysis of purified tyrosylprotein sulfotransferase. The immunoblot analysis was carried out as described under Materials and Methods. Identification of TPST purified from whole saliva by silver staining (Lane A) and by western blot (Lane B) 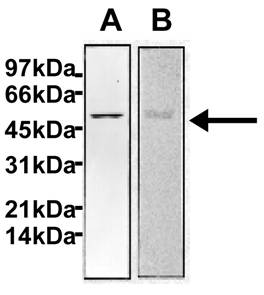