This is an open access article distributed under the terms of the Creative Commons Attribution (CC BY-NC) License. See http://ivyspring.com/terms for full terms and conditions.
Citation:
Wada H, Makabe K. Genome duplications of early vertebrates as a possible chronicle of the evolutionary history of the neural crest. Int J Biol Sci 2006; 2(3):133-141. doi:10.7150/ijbs.2.133. Available from http://www.ijbs.com/v02p0133.htm

Several important novel structures evolved in ancestral vertebrates, including a complicated nervous system equipped with integrated sensory systems, bones, and acquired immune systems. Importantly, these novel structures probably did not evolve all at once, but via sequential steps. Therefore, to understand the early evolutionary history of the vertebrates, we need to reveal the evolutionary sequence of the emergence of these novel structures. This information will have rich implications concerning how the bodies of ancestral vertebrates became more elaborate, and what kinds of adaptation promoted the evolution of the body plan.

To infer the evolutionary sequence of vertebrate characteristics, fossil evidence is the richest source of information. In addition, the genome is another possible chronicle of the early history of vertebrates. It is now widely accepted that vertebrates experienced two rounds of whole genome duplication, which can be traced from conserved genomic segments in chromosomes [1, 2]. Traces of these genome duplications are also evidenced in the observations that most invertebrate genes have two to four counterparts in vertebrate genomes.

The mouse possesses six Dlx genes, all of which are expressed in the neural crest or its derivatives [25]. Although molecular phylogenetic analysis did not resolve the phylogeny of chordate Dlx genes, it is consistent with the idea that multiple Dlx genes have evolved through the genome duplications of ancestral vertebrates (Fig. 1). Stronger support for this conclusion comes from the genomic organization. The six vertebrate Dlx genes are located on chromosomes as three pairs, and the three pairs are linked with the Hox clusters of vertebrates [26]. Duplication of the Hox cluster of vertebrates is the best-known example of the genome duplications. Therefore, an ancestral Dlx gene linked to the Hox cluster duplicated in tandem. Subsequently, the genome duplications gave rise to four pairs of Dlx. The one linked to the HoxC cluster may have been lost. Ciona has three Dlx genes. Interestingly, two of these (DllA and DllB) are linked on a chromosome in the tail-to-tail direction as vertebrate homologs [27]. Our phylogenetic analysis weakly support the close relationship of Ciona DllA to vertebrate Dlx1, 6, and 7, while DllB is more closely related to Dlx2 , 3, and 5 of vertebrates. This suggests that the tandem duplication of Dlx genes predates the divergence of ascidians and vertebrates; i.e., the common ancestors of ascidians and vertebrates possessed Dlx genes linked in tandem, although the high substitution rate of Ciona Dlx genes makes the tree topology less convincing (Fig. 1). One of the Ciona genes, DlxC, and amphioxus Dlx are expressed in the neural plate border [5, 27, 28]. 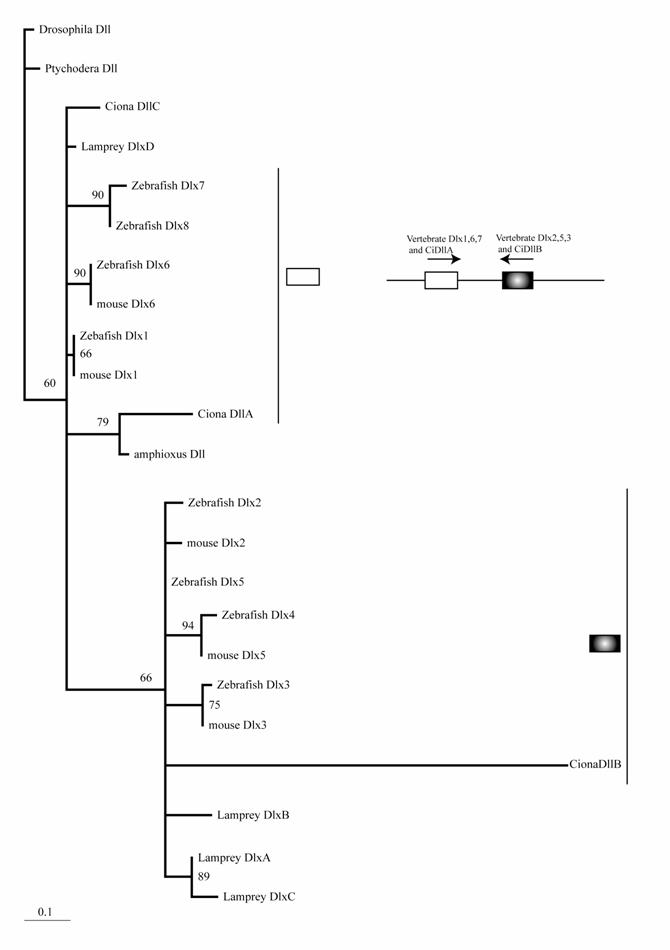 Three vertebrate paralogs of SoxE (Sox8, 9, and 10) are expressed in the neural crest. Both ascidian and amphioxus possess a single ancestral type of SoxE gene [9, 21] (HW, unpublished data). Therefore, although SoxE expression has not been examined in either ascidians or amphioxus, SoxE was likely involved in neural crest specification before the genome duplications.

Vertebrates possess five AP-2 genes; three of them, AP-2a, b, and g, are expressed in the neural crest [34]. Molecular phylogenetic studies support the evolution of four vertebrate genes in the ancestral vertebrates, although we could not resolve the phylogenetic position of AP-2d [35] (Fig. 2D). Amphioxus AP-2 is expressed uniformly in epidermal cells [35]. Ciona has two AP-2 genes, and one of them is not expressed in early embryogenesis, while the other one (AP-2-like2) is expressed in epidermal cells [28]. Interestingly, careful examination has revealed that the expression of AP-2-like2 is up-regulated in the dorsal midline epidermis (Fig. 2A, B). Similar up-regulation is also observed in Halocynthia AP-2 (Fig. 2C). This expression pattern is reminiscent of Xenopus AP-2a, which is expressed rather broadly in epidermal cells, and their expression is subsequently up-regulated in the neural crest cells [36].

Characterization of the ascidian homologs of AP-2. (A-C) The expression of CiAP-2 (A, B) and HrAP-2 (C) at neurula stage. Embryos in A and C are viewed from dorsal side, while B is the lateral view (anterior to the left). Upregulation in the dorsal midline epidermis of AP-2 is observed in both Ciona and Halocynthia (arrowheads). Note that epidermal cells abutting the anterior edge of the neural plate also show upregulation of the AP-2 (arrow). (D) Molecular phylogenetic tree of AP-2 genes. AP-2 from Halocynthia roretzi (HrAP-2) was isolated from a cDNA library of the gastrula stage (Acc. No.: XXXX). The tree is constructed by quartet maximum likelihood method using Treepuzzle [54] based on the conserved amino acid sequences of the helix-span-helix motif.


Vertebrates have five paralogs of the D group Fox genes, of which FoxD1 and D2 are relatively closely related [37]. Ascidian and amphioxus possess the ancestral type of FoxD gene [38, 39]. Molecular phylogenetic studies support the hypothesis that the genome duplications gave rise to FoxD1-2, D3, D4, and D5 [38]. In contrast to the genes mentioned above, only one of the paralogs of FoxD, FoxD3, is involved in neural crest specification [40, 41]. Ascidian and amphioxus genes are expressed in the endoderm, notochord, and neural tube, and no restricted expression pattern was observed along the dorsoventral axis of the neural tube [38, 39]. Therefore, FoxD3 genes might have become involved in neural crest specification after the genome duplication occurred, although the possibility cannot be excluded that FoxD became involved in neural crest specification in ancestral vertebrates before the genome duplications, and that function was inherited by one of the duplicated genes, FoxD3.

Delamination of the neural crest depends on the regulated expression of cell adhesion molecules, i.e., cadherins. N-cadherin and cadherin6 are expressed in the pre-migratory neural crest, while others, such as cadherin7 and cadherin11, are expressed in post-migratory neural crest cells [42,43]. The ectopic expression of N-cadherin or cadherin7 in the neural tube prevents neural crest delamination without affecting differentiation of the neural crest [44]. Molecular phylogenetic analyses of cadherin genes have shown that vertebrate cadherin genes can be classified into two families: type I cadherins include E‑, N-, P-, and R-cadherins, while type II includes other classic cadherins, such as cadherin6, 7, and 11 [45] (Fig. 3A). Ascidians have two cadherins corresponding to type I and II cadherins of vertebrates [46]. Type I cadherin is expressed ubiquitously both in Ciona and Halocynthia [47] (data not shown), whereas type II cadherin (CiCadherinII) is predominantly expressed in the neural tube [48] (Fig. 3C). Subsequently, CiCadherinII marks subpopulations of cells in the brain (Fig. 3D). This expression pattern of CiCadherinII suggests that in addition to its role in neurulation, type II cadherin played a role in the formation of neuromeres in the brain of the ancestral chordate. Amphioxus possesses two cadherins, whose molecular structures are odd and show similarity to those of non-chordate invertebrates [49, 50]. We could not tell when the gene duplication that gave rise to type I and type II cadherin occurred in the present molecular phylogenetic analysis [50]; however, multiple copies of type I and type II genes obviously emerged in ancestral vertebrates (Fig. 3A). Therefore, the evolution of the molecular machinery using these cadherins for neural crest delamination must have occurred after the genome duplications.

The Rho family of small GTPases is involved in several aspects of regulating cell motility. RhoB is responsible for regulating the delamination of the neural crest [51]. Molecular evolutionary analyses have presented evidence that vertebrates acquired three Rho genes that were derived from a single ancestral chordate gene [52] (Fig. 3B). Halocynthia has a Rho gene that is expressed ubiquitously (data not shown). Therefore, RhoB acquired specific neural crest expression after the genome duplications.

Jeffery et al. (2004) found that one colonial species of ascidian (Ecteinascidia turbinate) possesses migrating cells from the neural tube, and that they differentiate into pigment cells, just like vertebrate neural crest cells [4]. As mentioned above, however, the delamination of these cells is unlikely to be regulated by switching several paralogs of cadherin genes. The control of delamination in the ascidian neural crest-like cells is an interesting issue. The mechanism regulating those cells may represent the ancestral machinery of the genetic control of neural crest delamination before the genome duplications. Conversely, because the neural crest-like cells begin migration well after neural tube closure, the cells might have acquired migration independently from the vertebrate neural crest.

Molecular evolution of cadherin and Rho genes. (A, B) Molecular phylogenetic trees of cadherin (A) and rho (B) genes, constructed by quartet maximum likelihood method using TreePuzzle 5.0 [54]. The amino acid sequences of the C-terminus cytoplasmic domain were used for the cadherin gene analysis, while entire amino acid sequences were used for the rho genes. Nucleotide sequences of rho genes from Branchiostoma belcheri (BbRho) and Halocynthia roretzi (HrRho) by following Acc. Nos. (YYYY for BbRho and ZZZZ for HrRho). (C, D) The expression of CiCadherinII in the neurula (C: lateral view) and tailbud stage embryo (D). CiCadherinII is expressed uniformly in the neural plate of neurula embryo (C), while in tailbud stage, it shows more restricted expression in the neural tube (D), suggesting its role in neuromere formation of ascidian CNS.

We thank Nori Satoh for providing the Ciona gene collection, which greatly facilitated this study, and Hiroki Oda for useful discussions on cadherin evolution. We also thank Nina Sugino and Kyosuke Kawahata for technical assistance of Ciona in situs. Part of the work presented here is supported by Kato Memorial Bioscience Foundation, and by Grants-in-Aid from the ministry of Education, Science, Sports and Culture, Japan (Nos. 12026219, 13045020, 14034228) to HW.

7. Wada H. Origin and evolution of the neural crest: a hypothetical reconstruction of its evolutionary history. Dev Growth Differ. 2001 ;43:509-520

29. Sefton M, Sanchez S, Nieto MA. Conserved and divergent roles for members of the Snail family of transcription factors in the chick and mouse embryo. Development. 1998 ;125:3111-3121