Amphioxus has neither elaborated brains nor definitive sensory organs, so that the two may have evolved in a mutually affecting manner and given rise to the forms seen in extant vertebrates. Clarifying the developmental and functional aspects of the amphioxus sensory system is thus pivotal for inferring the early evolution of vertebrates. Morphological studies have identified and classified amphioxus sensory cells; however, it is completely unknown whether the morphological classification makes sense in functional and evolutionary terms. Molecular markers, such as gene expression, are therefore indispensable for investigating the developmental and functional aspects of amphioxus sensory cells. This article reviews recent molecular studies on amphioxus sensory cells. Increasing evidence shows that the non-neural ectoderm of amphioxus can be subdivided into molecularly distinct subdomains by the combinatorial code of developmental cues involving the RA-dependent Hox code, suggesting that amphioxus epithelial sensory cells developed along positional information. This study focuses particularly on research involving the molecular phylogeny and expression of the seven-transmembrane, G protein-coupled receptor (GPCR) genes and discusses the usefulness of this information for characterizing the sensory cells of amphioxus.

Amphioxus is sometimes referred to as an “acraniate”, which is the counterpart of “craniate” and means headless animal. As discussed elsewhere, evidence of cephalization in protochordates can be seen both developmentally and anatomically. In particular, a comparison of developmental gene expression between amphioxus and vertebrates revealed evolutionarily conserved anteroposterior and dorsoventral patterns of the neural tubes [1, 2, 3]. These molecular correspondences at the embryonic and larval stages can sometimes be related to morphological outcomes seen in adult anatomy, as exemplified by the repeatedly promulgated homology between the vertebrate neurohypophysis and the infundibular organ of amphioxus [4, 5, 6, 7]. Despite a series of detailed, EM-based neuroanatomical work by Lacalli and colleagues [8], there is no convincing evidence that amphioxus have no regions comparable to telencephalon-derived structures such as the cerebrum and olfactory bulb, suggesting that these are vertebrate innovations. This idea coincides with recent findings that the genes required for the formation of telencephalic structures in vertebrates show no comparable expression in amphioxus [9, 10]; further, the most anterior region of the amphioxus brain vesicle cannot be comparable to any region of vertebrates based on developmental gene expression patterns [11]. The vertebrate brain, according to the definition by Ayers [12], is an anterior portion of the neural tubes associated with organs of special senses. In other words, elaborations of the sensory organs and central nervous system undoubtedly underlie the appearance of considerably cephalized animal like vertebrates, and sensory organs and the central nervous system may have evolved in a mutually affecting manner, both functionally and embryologically. It is thus necessary to investigate the developmental and functional aspects of the amphioxus sensory system and to compare it with those of vertebrates.

2. Classification of epithelial sensory cells and their possible functions

To gain insight into the functional modality of epithelial sensory cells of amphioxus, Satoh [26] tried to characterize these cells based on the molecular phylogeny and expression of the G protein-coupled receptor (GPCR) genes. The GPCR family in vertebrates contains multiple copies of gustatory and olfactory receptor genes and photosensitive opsin genes. Thus, identifying the amphioxus counterparts of these GPCR genes may be useful in disclosing the functions of the identified sensory neurons. It may even be possible to infer the causal relationship between the elaboration of sensory modalities and large-scale genomic duplication thought to have taken place in a lineage leading to the vertebrates [27, 28, 29, 30], although Horton and colleagues proposed that molecular phylogenetic analyses are insufficient for dating genomic duplication events in the vertebrate phylogeny [31]. In particular, multiple copies of vertebrate olfactory receptor (OR) genes are arrayed throughout the genome, yielding 100 genes in teleosts and 1000 genes in rodents [32]. Each vertebrate olfactory sensory neuron selectively chooses only one allele of the receptor gene from a vast array of genes, and vertebrate ORs predominantly lack introns. Gentles and Karlin [33] proposed that the mRNA of an ancestral olfactory receptor gene was reverse-transcribed and incorporated in the genome, resulting in the early template of the intronless ORs.

An intronless GPCR gene found in the amphioxus genome showed weak sequence similarity to the vertebrate ORs. Although molecular phylogenetic analysis assigned this gene to a sister group of the vertebrate ORs [26], conclusive phylogenetic assignments should await genome-wide characterization of the amphioxus GPCR genes. In addition, there is no evidence of the existence of other GPCR genes located in close proximity to the intronless GPCR gene [26]. The ORs of the zebrafish are evenly interspaced by about 1-kb non-coding regions [34], suggesting that duplication of the olfactory-related GPCR genes may have occurred in a lineage leading to the vertebrates or gnathostomes. cDNAs of lamprey ORs have been characterized [35, 36], whereas the number of ORs in the lamprey genome remains unknown; more importantly, the genomic organization of the lamprey ORs (i.e., whether they have introns or not) remains to be investigated. For these reasons, it is so far impossible to date precisely the massive expansion of the ORs in the vertebrate phylogeny.

The expression of the amphioxus GPCR gene was seen in the bipolar neurons embedded within the rostral epithelium (Fig. 2). If this expression domain correspond with a region thought to be comparable to the vertebrate nasal epithelium based on the larval expression of the Pax6 [37], BMP2/4 [38], and msx [39] genes, the GPCR-positive bipolar neurons can be seen as chemosensory cell populations. Taking neuroanatomical data into consideration, neurites of the GPCR-positive epithelial sensory cells seem to constitute a nerve fiber called the anterodorsal nerve. The anterodorsal nerve is composed of two major branches, the dorsal branch and ventral branch [15]. It is therefore possible that the dorsal and ventral branches respectively correspond to the dorsally located and ventrally located GPCR-positive cell populations (Fig. 2) (see also [26] and [40]). Furthermore, there is another nerve located rostrally in relation to the anterodorsal nerve, the so-called rostral nerve. The rostral nerve terminates at the rostral tip, a GPCR-negative region (Fig. 2). Collectively, the rostral epithelium of amphioxus can be functionally subdivided into subdomains, and each peripheral nerve is likely to correspond to the regionalization of the epithelial sensory cells. However, it remains to address whether the regionalization seen in the rostral epithelium of amphioxus makes any sense in functional or evolutionary context. Nevertheless, it is worth to note that the rostral epithelium of appendicularian, the earliest branch of the urochordates [41], can be subdivided into molecularly distinct subdomains comparable to the vertebrate hypophyseal, olfactory, and otic placodes [42], despite no molecular evidences of such regionalization in other tunicates like ascidians except for putative hypophyseal placode counterpart (for review, see [43]).

Molecular phylogenetic tree based on the maximum-likelihood method, showing the phylogenetic relationships of ciliary and Go-coupled opsin proteins. The tree was rooted with rh4 opsin of Drosophila. Note that branch length is not proportional to the genetic distance. The numbers at each node are the percentage confidence values of the ML tree 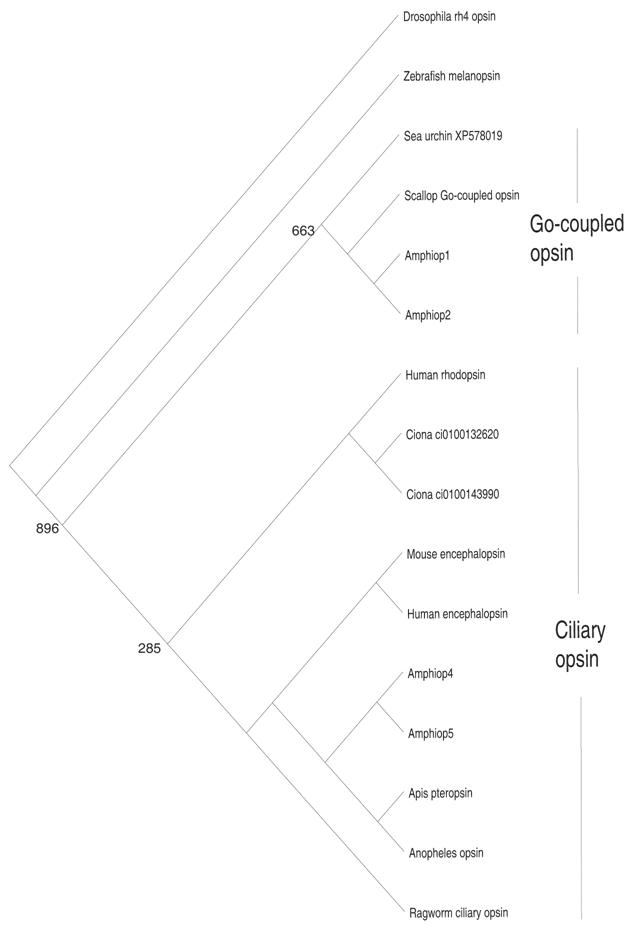 To infer the evolutionary relationship between the photosensory cells of invertebrates and vertebrates, molecular phylogenetic analysis regarding amphioxus opsin genes is indispensable. It is particularly important to examine whether a ciliary and rhabodomeric dichotomy has been maintained even in the chordate lineage. Koyanagi et al. [55] reported that the amphioxus counterpart of melanopsin, a rhabdomeric opsin, possesses a photochemical property that is quite similar to that of the invertebrate opsin gene and that its expression is seen in Hesse's eye cups and Joseph cells, which clearly have rhabdomeric morphologies [48, 51]. These results, together with the monophyly of the rhabdomeric opsin gene and the Gαq gene [44], support a homology between vertebrate RGCs and invertebrate rhabdomeric cells, although this must be corroborated by developmental gene expression studies in the future.

In contrast to that of the rhabdomeric cells, the evolutionary histories of ciliary cells and ciliary opsin genes appear to be more complex. Molecular phylogenetic analysis has assigned Amphiop5 as a ciliary opsin, whereas Amphiop1 clustered with so-called Go-coupled opsin (Fig. 3). Amphiop1 is expressed in the photosensory cells of larval frontal eye, while Amphiop5 is expressed in the frontal eye of adults (Satoh et al., unpublished observation). Amphiop1 protein has been shown to bind to 11-cis-retinal [56], suggesting that Amphiop1 is involved in photodetection in the frontal eye of amphioxus larvae, which show diurnal vertical migration in the water column [57]. The Go-coupled opsin gene of the scallop is also expressed in ciliary cells [58], so that Go-coupled opsin can be seen as a part of the ciliary opsin. Consequently, ciliary opsin in broad sense is likely composed from two distinct evolutionary lineages. More importantly, the Go-coupled opsin group is devoid of vertebrate counterparts, implying that Go-coupled opsin became extinct in the vertebrate lineage. If so, highly diversified ciliary opsin genes in vertebrates have derived from very limited number of early templates via repeated gene duplication. In line with this notion, Nordstrom and colleagues [59] postulated that the majority of the genes involved in the phototransduction pathways of vertebrates may have arisen by an extensive gene duplication event in early vertebrate evolution. Taken together, an increase in the repertoire of phototransduction genes, including opsin, underlie the evolution of the functionally diverse ciliary cells seen in the vertebrate retina.

4. Molecular evolution of GPCR genes and characterization of the sensory cells: A problem

As discussed above, the expression of GPCR genes appears to be a useful marker for disclosing the functional and evolutionary aspects of amphioxus sensory cells. Studies on opsin gene expression are a typical example of this line of research. A clear distinction between ciliary and rhabdomeric opsin genes across the bilaterian phylogeny suggests the possibility that the molecular phylogenetic classification of GPCR genes may agree with the functional and morphological classifications of amphioxus sensory cells in which GPCR genes are expressed. However, the molecular phylogeny of GPCR genes is complex and requires careful analysis because of the high substitution rates and the independent gain and loss of GPCR genes. For example, it is difficult to identify a clear evolutionary affinity between the chemosensory receptor genes of C. elegans and Drosophila based on sequence comparisons [60], suggesting that these genes have formed independently. This raises concerns regarding surveys of the chemosensory GPCR genes in the amphioxus genome. It is possible that amphioxus has chemosensory receptor genes whose sequences are quite different from those of vertebrate ORs or gustatory receptor genes. Thus, in the post-genomic era, a comprehensive analysis of amphioxus GPCR genes will be necessary. In addition to the classification of the amphioxus GPCR genes as a whole based on molecular phylogenetic analysis, investigations of the genomic organization and expression analyses will also be required to determine the functional modalities of sensory cells and to date massive expansion of the GPCR genes in early vertebrate evolution.

Gouki Satoh is a postdoctoral research fellow of the Japan Society for the Promotion of Sciences (JSPS) and is supported by a research grant (17-7109) from the Ministry of Education, Culture, Sports, Science, and Technology (MEXT) of Japan.

5. Gorbman A. Olfactory origins and the evolution of the brain-pituitary endocrine system: Facts and speculation. Gen Comp Endocrinol. 1995 ;97:171-178

40. Satoh G. A trajectory of increasing activeity and the elaborateion of chemosensory modality: a new perspective on the vertebrate origins. Zool Sci. 2005 ;22:613-626

Gouki Satoh obtained Ph. D. degree from Kyoto University in 2003. As a predoctoral research fellow of the Japan Society for the Promotion of Science (JSPS) (2001-2003), he focused on the embryonic development and gene expression patterns of ascidians and amphioxus for comparisons with vertebrates. Currently, he is a postdoctoral research fellow of the JSPS and investigates molecular evolution of GPCR genes to disclose an evolutionary aspect of the amphioxus sensory system.