Differences in Apoptosis and Cell Cycle Distribution between Human Melanoma Cell Lines UACC903 and UACC903(+6), before and after UV Irradiation

Cutaneous malignant melanoma (CMM) is the most serious form of skin cancer because of greater likelihood for metastasis and apoptotic resistance to available chemotherapy and biotherapy [1-3]. CMM derives from the transformation of melanocytes in skin due to accumulation of genetic alterations, likely involving in oncogenes and suppressor genes [4]. Consistent with this view, introduction of a neo-tagged chromosome 6 into the different CMM cell lines led to suppression of tumorigenicity [5] and metastasis [6;7]. Molecular analyses of CMM cell lines resulted in identification of the chromosome 6-encoded tumor suppressor gene connexin 43 [8;9] and the chromosome 1-encoded metastasis suppressor gene KiSS-1 [10]. While it is generally assumed that the suppression is due to reduced cell proliferation, apoptotic features of CMM cell lines and the chromosome 6-mediated suppressed cell sublines have not yet been defined.

This study utilized human CMM cell line UACC903 and the chromosome 6-mediated suppressed cell subline UACC903(+6) [5]. UACC903 displays malignant tumorigenic phenotypes in in vitro culture and in mouse xenografts. The malignant phenotypes including a rapid growth rate and anchorage-independent growth in culture and fast tumor formation in athymic nude mice are suppressed in the cell subline UACC903(+6) [5;8;9]. In addition, we observed that 103 of 121 (85%) colony-forming clones selected from the UACC903(+6) cells underwent crisis and eventually cell death at different time points during cell culture [8]. Accordingly, we hypothesize that the UACC903 cell line is resistant, while UACC903(+6) cell line is sensitive, to environmental factor-induced cell death that may be via an apoptotic pathway.

To test this hypothesis, we characterized the differences of apoptosis and cell cycle distribution between these two cell lines before and after UV irradiation. Our results demonstrated significantly higher apoptosis and G0/G1 arrest in the UACC903(+6) cells than in UACC903 before UV treatment. After UV irradiation, the UACC903 cells displayed G2/M arrest and apoptotic resistance compared to UACC903(+6). The results increase our understanding of the effects of UV irradiation on apoptosis and cell cycle control observed in two closely related melanoma cell lines and provide new insight into the cellular mechanisms by which the chromosome 6-mediated tumor suppression operates.

These were detected by previously described methods [11]. Both attached and floating cells were harvested for analysis. DNA samples were fractionated by electrophoresis. Gel images were documented using a PhotoDocIT system (UVP, Upland, CA).

This was performed by previously described methods[12;13]. Both attached and floating cells were harvested for cell cycle analysis. For early apoptosis, attached cells were harvested for sorting in annexin-V-fluorescein and PI buffer (Roche, Nonnenwald, Penzberg, Germany). For each experiment, 10,000 cells were analyzed using ELITE Flow Cytometry (Beckman Coulter, Fullerton, CA) and Cell Quest software (Becton Dickinson, Franklin Lakes, NJ). Triplicates were performed in all cases except for the detection of early apoptotic cells.

Calculations of mean, SD, and p values were performed on triplicate experiments using XLSTAT 2006 (New York, NY). The Student T-test was used to calculate p-values for comparison. The significant statistics was set at a p-value <0.05.

Apoptotic DNA ladders before and after UV irradiation

Figure 1C shows morphologies of UACC903 and UACC903(+6) cells before and 24 hr after UV irradiation. The polygon cells were viable and the round became dead. Few round cells were seen before UV irradiation, in contrast to the significant increase after UV treatment. Apoptotic cell death was demonstrated by DNA fragmentation. Figure 1D shows the typical apoptotic DNA ladders (2-fold multiplies of 0.2-kb fragments) in the UV-treated UACC903(+6) samples, as well as strong and weak smears of high molecular weight DNA, respectively, in the UV-treated UACC903 and two untreated samples. The ladders demonstrate apoptosis and the smears are consistent with reports that apoptotic DNA fragments can be as high as 300 kb [11;16].

UV induced apoptosis. (A) Dose-dependent response to UV irradiation. UACC903 and UACC903(+6) cells were exposed to UVC (254 nm) at indicated doses. Viable cells were measured by MTT assay at 24 hr after the UV treatment. Red and blue arrowheads point to the UVC LD50 of the UACC903(+6) (36 J/M2) and UACC903 (137 J/M2) cell lines calculated by fitting trendlines to the data. Means and SD were calculated using the 490-nm absorbance of UV-treated cells divided by that of untreated control. At 40 J/M2, UACC903 viable cells were 88.74±5.54% that is significantly (p=0.0002) higher than UACC903(+6) (44.67±1.12%). (B) Time-dependent response to UV treatment. Viable cells were measured by MTT assay at indicated time after 40-J/M2 UVC irradiation. Samples at 0 hr were not-irradiated controls. (C) Morphology of UACC903 and UACC903(+6) cells before and at 24 hr after exposure to 40-J/M2 UVC. Polygon cells were viable and the round became dead. The density of UACC903(+6) appears lower than that of UACC903 because the former had more floating dead cells than the latter and all floating cells had been removed from the culture dishes before taking images. Bar, 200 nm. (D) Representative gel image of apoptotic DNA ladders. Genomic DNA were extracted from both attached and floating cells before and at 24 hr after 40-J/M2 UVC irradiation using phosphate-citric acid buffer (0.2M Na2HPO4, 4mM citric acid) with a final concentration of 18 units/ml RNase A, 100 μg/ml proteinase K, and 0.1% Triton X-100. One microgram per DNA sample was loaded into a well of 1.5% agarose gel for electrophoresis to fraction DNA ladders. DNA markers and sizes in kilo-base pairs (kb) are indicated. Triplicate experiments were performed. 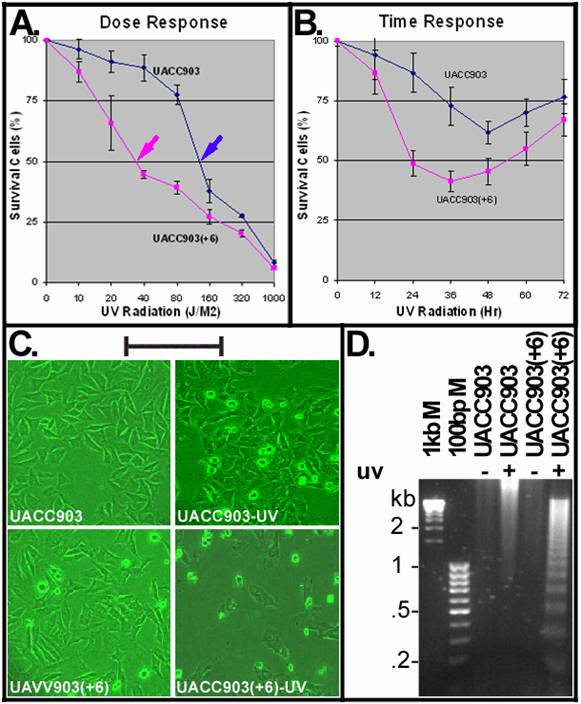 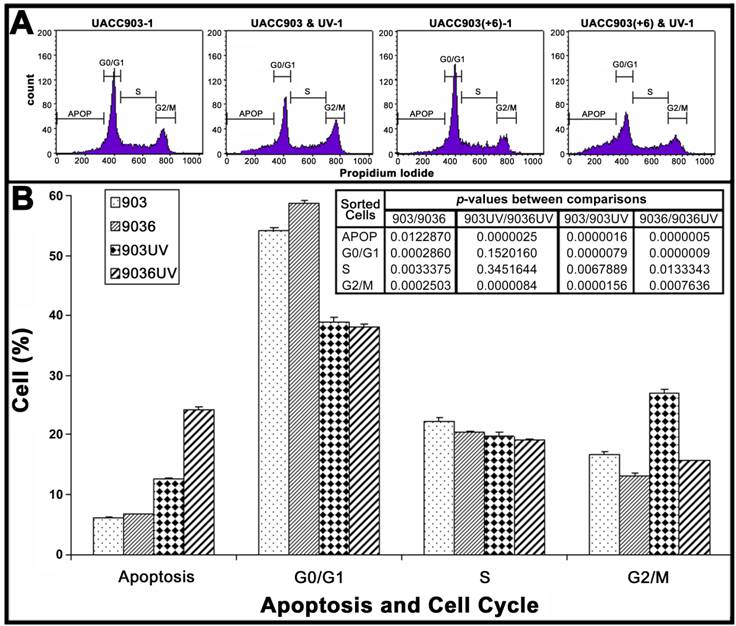 Detection of early apoptosis. (A) Plots of sorted apoptotic cells. The cells attached to culture dishes before and at 6, 12, 18, and 24 hr after UV treatment were harvested and stained with annexin-V-FITC plus PI. 10,000 cells of each experiment were sorted by ELITE Flow Cytometry (Beckman Coulter) and analyzed using Cell Quest software (Becton Dickinson). Early apoptotic cells (Annexin-V+ and PI-) were displayed in the lower right quadrant and late apoptotic cells (Annexin-V+ and PI+) were shown in the upper right quadrant. The percentages of apoptotic cells were listed in the quadrants. Because floating cells were excluded from analysis, the percentages in the upper right quadrants underestimate the numbers of late apoptotic cells. (B) Representative images of in situ apoptotic DNA breaks. Cells attached to glass slides in culture dishes before and at 1.5, 3, 6 and 12 hr after the UV irradiation were processed by the terminal deoxynucleotidyl transferase-mediated dUTP biotin nick-end labeling (TUNEL) assay using the In Situ Cell Death Detection Kit (TMR, Roche). The images were acquired with a high sensitivity Evolution MP Charge-Coupled Device (CCD) system and ImagePro software v.5.1 (Media Cybernetics). Cells for negative controls were not treated by UV irradiation and processed under the same TUNEL conditions without adding the terminal transferase. Cells for positive controls were incubated, after permeabilization, in the nicking buffer (500 U/ml DNase I, 50-mM Tris-HCl, pH 7.5, 1 mg/ml BSA) for 10 min at room temperature to induce DNA strand breaks, prior to the TUNEL labeling. Bar: 200 nm. Insert: 4 x 200 nm magnification.

Resistance to apoptosis and nonstop proliferation are characteristics of malignant cells different from their normal counterparts. Dr. Trent and his colleagues have demonstrated a more rapid proliferation of human malignant melanoma cell line UACC903 in culture and mouse xenografts than that of the chromosome 6-mediated suppressed cell subline UACC903(+6) [5;8]. Previously our laboratory discovered the chromosome 6-encoded connexin 43 (Cx43) suppressing proliferation of these melanoma cells[9]. In the present study, we demonstrate, for the first time, the differences in apoptosis and cell cycle distributions between UACC903 and UACC903(+6) cells, before and after UV irradiation. This discovery provides new insights into cellular mechanisms by which the chromosome 6-mediated tumor suppression operates.

UACC903 and UACC903(+6) cells display different rates in apoptosis and cell cycle distribution before UV treatment, as measured by cell-cycle flow cytometry and TUNEL assays. The cell-cycle flow cytometry detected 10.1% higher apoptotic cells in the UACC903(+6) cell population than in the UACC903 (p = 0.012), while the TUNEL assay demonstrated 4.16-fold higher in the former than in the latter (p <0.01). Because these assays measure different stages of apoptosis, the proportion of apoptotic cells was expected to vary. The TUNEL assay detects the in situ DNA strand breaks [14;15]; whereas cell-cycle flow cytometry cannot detect apoptosis until the integrity of cell membrane is altered and the degraded nuclear DNA leak out of cells [12;13;17]. It is worthy mentioning that the annexin-V flow cytometry data (Fig. 3A) cannot be compared directly with the results derived from the cell-cycle flow cytometry and TUNEL assays for several reasons. First, only attached cells (viable and early apoptotic cells) were used for the annexin-V flow cytometry (Fig. 3A) and TENUL assays (Fig. 3B and Fig. 4); in contrast, both attached and floating (dead) cells were harvested for the cell-cycle flow cytometry (Fig. 2). Second, apoptotic DNA strand breaks detected by the TUNEL assay occur earlier than reversion of phosphatitylserine from the inner leaflet of the cell membrane to the outer leaflet that can be bound by annexin-V [12-15]. Third, the annexin-V flow cytometry aimed at revealing the UV-induced early apoptotic changes which indeed provided a reference time point, that is, prior to 12 hr after the UV treatment for the TUNEL assays. Although 10.1% apoptotic difference seems small, it can be amplified in response to environmental factors, for example, UV irradiation as demonstrated in this study. In vivo, host factors might affect survival and/or apoptosis differentially on these two cell lines, therefore, affecting tumorigenicity. Apparently, fewer apoptotic cells in the UACC903 cell population than those in the UACC903(+6) suggests more viable malignant cells are available for proliferation and tumorigenesis. Additionally, fewer G0/G1 and more S cells in UACC903 than in UACC903(+6) are evidence of more active proliferation of the former than that of the latter.

Genotoxicity of UV irradiation caused redistribution of the melanoma cells in apoptosis and cell cycle. The dose- and time-dependent response demonstrated that the UACC903 cells were resistant, while UACC903(+6) were sensitive, to UV-induced apoptosis. Interestingly, the trendlines fitted mathematically to the TUNEL-positive cells revealed a linear and exponential increase of apoptosis in UACC903 and UACC903(+6) cells, respectively. Apparently, different molecular mechanisms underlie these apoptotic characteristics. Regarding UV-induced cell cycle redistribution, out of 15.20% reduction of UACC903 cells from G0/G1, 61% were redistributed to G2/M and 39% to apoptosis. In contrast, out of 20.85% reduction of the UACC903(+6) G0/G1 cells, 13% were shifted to G2/M and 87% to apoptosis. Therefore, G2/M arrest and apoptotic resistance are the major differences observed between UACC903 and UACC903(+6) cell lines in response to the UVC treatment. The UVC-induced UACC903 G2/M arrest is reminiscent of a recent report that all of UVA (400 – 320 nm), UVB (320 – 290 nm) and UVC (290 – 200 nm) induced G2/M arrest of the G361 human melanoma cell line[20]. The G2/M arrest could be due to UV-induced DNA damage and might provide a mechanism for DNA repair. In this regard, it is known that UVC and UVB induce formation of cyclobutane pyrimidine dimers and (6 – 4) photoproducts which are normally repaired by a nucleotide excision repair mechanism[21]. While UVA and UVB play a role as an etiology in development of skin cancer including malignant melanoma, UVC is the most frequently used UV light in studying UV-induced DNA damage and apoptosis.

In summary, we characterized the differences in apoptosis and cell cycle distribution between human malignant melanoma cell line UACC903 and the chromosome 6-mediated suppressed cell line UACC903(+6), before and after UV irradiation. Without UV treatment, S- and G2/M cells were significantly higher in UACC903 than in UACC903(+6) cell line; whereas the latter had more cells in apoptosis and G0/G1 than the former. After UV irradiation, G2/M arrest and apoptotic resistance become the major differences between UACC903 and UACC903(+6) cell lines. While it is of interest to further study the molecular basis underlying these differences, our current findings provide a novel mechanism by which chromosome 6 suppresses tumorigenesis and metastasis.

Supports: NIH-NIDDK-06-925 and the Catherine B McCormick Genomics Center. We thank Dr. Allan Goldstein and AnhThu Nguyen for critical review and discussion of the manuscript and assistance in English grammars.

Authors state that there are no any competing financial, professional, or personal conflicts of interest related to this publication.