Free radicals are not only destructive to the living cells but also reduce the quality of animal products through oxidation. As a result the superoxide anion radical (O2・-), one of the most destructive reactive oxygen species, is a matter of concern for the animal scientists as well as feed manufacturers to ensure the quality of product to reach consumers demand. The superoxide anion radical scavenging activities (SOSA) of water and MeOH extracts of 2 herbs and 9 pasture samples collected from lowland and highland swards were determined against a 5,5-dimethyl-1-pyroline-N-oxide-O2・-spin adduct based on a hypoxanthine-xanthine oxidase reaction using electron spin resonance spectrometry. Both the water and MeOH extracted SOSA differed among the herbs and pastures. Species and altitudinal variations were observed between extraction methods. The herbs were higher in both water and MeOH extracted SOSA than the pastures except for water extracts of one pasture, white clover (Trifolium repens L.). Among the pastures, quackgrass (Agrophyron repens L.) showed higher SOSA in both the MeOH and water extracts, and timothy (Phleum pretense L.) showed higher MeOH extracted SOSA. It is apparent that the kind and amount of antioxidants differ among herbs and pastures. Animal health and quality of animal products could be improved by adequate selection and combining of herbs and pastures having higher SOSA.

A part of the oxygen taken into living cells is changed to several harmful reactive oxygen species and free radicals. Once formed, free radicals can start a chain reaction leading to formation of more free radicals. Superoxide anion radical (O2・-) is one of the strongest reactive oxygen species among the free radicals that are generated first after oxygen is taken into living cells. O2・- changes to other harmful reactive oxygen species and free radicals such as hydrogen peroxide and hydroxyl radical. Although detailed relationships between antioxidants and animal health have not yet been reported, antioxidants supplied through diets improve the antioxidative activity of animals, hence leading to improved animal health. Natural antioxidants supplied through forage grasses and legumes can also prolong the shelf life of meat and milk and protect meat from losing its desirable red color [1,2]. The freshness, fat content, flavor and color of meat are key factors used to judge the quality of meat by consumers, and diet has a potent influence on these factors [3-5]. The rate of loss of the red color is related to the degree of unsaturation of lipids and the presence of antioxidants supplied through the diet [6]. Natural antioxidants from plants also protect unsaturated fatty acids such as n-3 fatty acids from oxidation [7]. Conjugated linoleic acid (CLA) was reportedly much higher for pasture-fed cattle than for concentrate-fed cattle [8], and pasture contains a high amount of the precursor of CLA, i.e., polyunsaturated C18:2, linoleic acid [9] which could be protected from oxidation by antioxidants from feed. It is generally considered that fresh pastures are the principal supplier of antioxidants to animals [2]. Ensuring the supply of antioxidants through pastures is essential to produce good quality products from animals. As a result, natural herbs and pastures having high antioxidative activities have attracted considerable interest from scientists as well as feed manufacturers [10]. However, antioxidant properties vary from species to species and within species due to environmental effects. For example, Collomb et al. [11] have reported that the composition related to antioxidative activities of milk and cheese differ depending on different altitudinal locations. The content of acteoside, an antioxidant, in forage herb plantain varies due to air temperature, light intensity, fertilizer application and harvesting season [12,13]. Plantain has a higher amount of superoxide anion radical scavenging activity (SOSA) than the principal temperate pastures used in northern Japan [14]. Despite the importance of natural herbs and pastures as a source of antioxidants, little attention has been paid to the determination of antioxidative properties of herbs and pastures. Few experiments have been carried out; including those of Lee et al. [15] on the antioxidative activities of alfalfa and timothy varieties using the DPPH method, and by Tamura and Masumizu [16] and Al-Mamun et al. [14] on SOSA measured using an ESR-spin trapping method for s limited number of pasture and herb species. Therefore, the present study was undertaken to find out the variation in the SOSA among a wide range of herbs and pastures, including grasses and legumes, collected from different altitudes in northern Japan.

The samples from the two swards were then freeze-dried in a FRD-50M freeze-drier (Iwaki Glass Co., Ltd., Japan) and ground to a fine powder using a vibrating sample mill (Heko Co. Ltd., Japan). Each of the 1 mg of ground samples was extracted either into 10 mL of water (pH adjusted to 7.4 with phosphate buffer) or into 10 mL of pure MeOH, with linear shaking for 1 hour at a speed of 130 revolutions hour-1 at room temperature. Finally, the samples were centrifuged at 3500 rpm for 10 min and the eluents used for the determination of SOSA by an ESR-spin trapping method. The experiment was conducted with three replicates.

The daily mean air temperature (oC) during sampling of the experimental areas. a, b; date of sampling at lowlands and highlands, respectively.

An HPX-XOD reaction system was used to determine SOSA. The chemicals were mixed in the following order: 15 μL of 9.2 mol L-1 DMPO, 50 μL of 2 mmol L-1 HPX, 35 μL of water (pH 7.4, adjusted using PB), 50 μL of samples, and finally, 50 μL of 0.4 U mL-1 XOD from cow's milk. The mixture was transferred to an ESR spectrometry flat cell and the DMPO-O2・- spin adduct was quantified for 1 min after the addition of XOD. Standard curves were made for both water and MeOH extracted samples and the SOSA was expressed as SOD equivalent units per milligram dry matter (DM) [17].

Total polyphenol measurement of freeze-dried herb and pastures from the highlands was performed according to the Folin-Denis colorimetric method [18]. Each of the 0.03-0.04 g of freeze-dried samples was first mixed with 5 volumes of water or MeOH, and kept for 2 hours at room temperature before centrifugation at 10,000 rpm for 10 min. Then, 0.1 mL of the supernatant was mixed with 0.1 mL of Folin-Ciocalteau's reagent. After 10 min, 0.1 mL of 10% saturated sodium bicarbonate was added and mixed well. After 1 hour the absorbance of the mixed samples at 655 nm was measured by a spectrophotometer. Catechin was used as the standard to which the samples were compared.

Freeze-dried samples from the highlands were used to determine vitamin C content using high performance liquid chromatography (HPLC) (LC 10AS, Shimadzu Co., Ltd., Kyoto, Japan). Quantitative analyses were performed at 35 ºC using a 4.6 mm × 10 cm column (Senshupak silica-1100-N). The mobile phase was an acetyl ether, n-hexane, acetic acid and water (60:40:5:0.05) solution. The flow rate was 1.5 mL min-1. Photodiode array detection was performed at 495 nm. First, 0.5 g of freeze-dried sample was extracted into 50 mL of 5% metalinic acid, homogenized and then centrifuged at 3000 rpm for 10 min. Then 1 mL of the eluent was mixed with 1 mL of 5% metalinic acid, 100 μL of 0.2% 2,6 dichlorophenol-indophenol sodium salt dehydrate and 2 mL of 2% thiourea-5% metalinic acid solution were added into the test tube. After that 0.5 mL of 2% of 2,4-dinitrophenol hydrazine-4.5 mol L-1 H2SO4 was added and kept at 38-42 oC for 16 hours. Finally 3 mL of acetyl ether was added and the mixture was shaken for 1 hour, and then used for determination of ascorbic acid by HPLC.

All data were expressed as mean values with standard error of the mean (SEM). Statistical analysis was performed using the General Linear Model procedure of SAS with Tukey's Studentized range (HSD) test of the SAS system [19]. In the case of individual species we used Student's t-test to compare the water and MeOH extracted SOSA and polyphenol content and the SOSA values of highlands and lowlands.

Differences in SOSA among herbs and pastures of lowlands

The SOSA of herb and pastures varied largely among species both in the water and MeOH extracts (Fig. 2). For the water extracted SOSA, WC showed the highest and PL was the second highest of the pastures while PR, TI, KB, JL and AL grouped significantly to the lowest. OR, RC and QG were in between PL and the lowest group.

Water and MeOH extracted SOSA of herb and pastures of lowlands. Values with different superscripts differed significantly (P<0.05). # Not detected. Note: Regarding Tukey's Studentized range (HSD) test for the MeOH extracted SOSA, we did the analysis twice, first for all species and secondly only for pastures, as PL was much higher than any of the pastures. 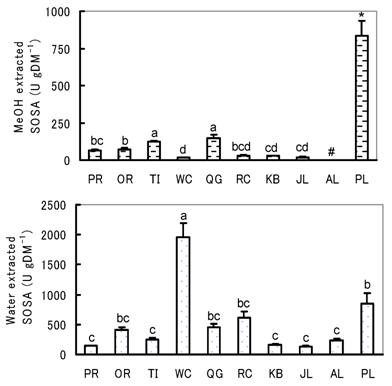 Differences of SOSA among herbs and pastures of highlands 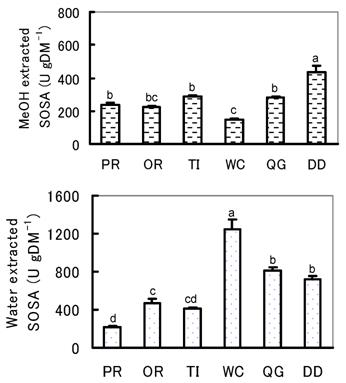 The present results obtained among species were basically the same between locations of different altitude. We conclude that the differences in both the water and MeOH extracted SOSA found in the present experiment might be attributable to the genetic characteristics of each species.

Comparison of SOSA between lowlands and highlands

In the present experiment, only five species, PR, OR, TI, WC and QG, were compared, as they were available in both lowlands and highlands. The water extracted SOSA of WC was higher in lowlands than in highlands, whereas other pastures remained comparable between locations of different altitude (Fig. 4). The reason why the water extracted SOSA of WC in lowlands was so much higher than that of highlands is unknown. But it could be considered that the residual effects of a cold winter in the highlands negatively affected the spring growth of WC, which is less winter hardy than the graminaceae species.

Comparison of the water and MeOH extracted SOSA contents of the common species between lowlands and highlands. *P<0.05. 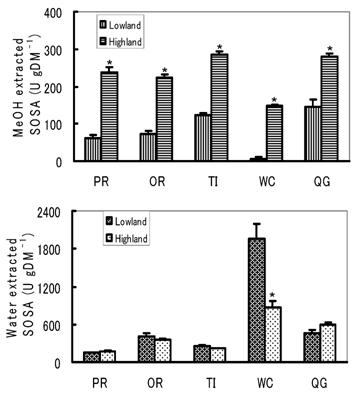 On the other hand, the MeOH extracted SOSA were very significantly higher in the highlands than the lowlands in all of the common species. The higher the altitude, the higher the amount of ultraviolet (UV) rays in sunlight that reaches the ground, as reported by Caldwell and Robberecht [21]. There have been many reports on the effects of UV irradiation on the accumulation of methanol soluble flavonoids and phenolic compounds in plants. For instance, Poulet et al. [22] showed that natural pasture from a mountain region had a greater amount of phenolics, which are antioxidants known to influence taste and preservation of animal products, than hay and silages made from principal forage grasses and crops such as perennial ryegrass, orchardgrass and maize. Highly positive correlations between the amount of UV radiation, both from sunlight and due to artificial radiation, and the accumulation of flavonoids and phenolic compounds were reported in some plant species [23-25]. Ingestion of plants at high altitudes that get more UV flux provides significant protection against ionizing radiation in experimental animals [26]. Therefore, we considered that the higher MeOH extracted SOSA of plants from the highlands could be attributable to higher amounts of flavonoids and phenolic compounds due to higher UV radiation.

Polyphenol and vitamin C contents and their relationship to SOSA 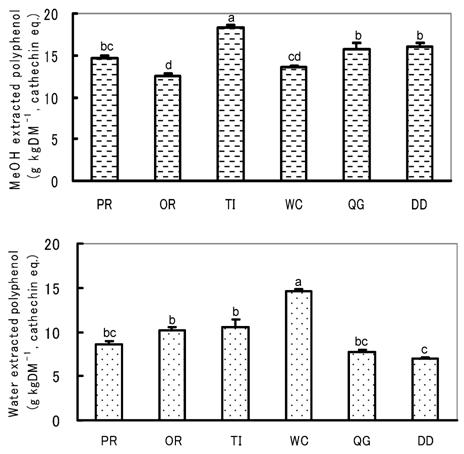 Relationship of SOSA to polyphenol and vitamin C content. 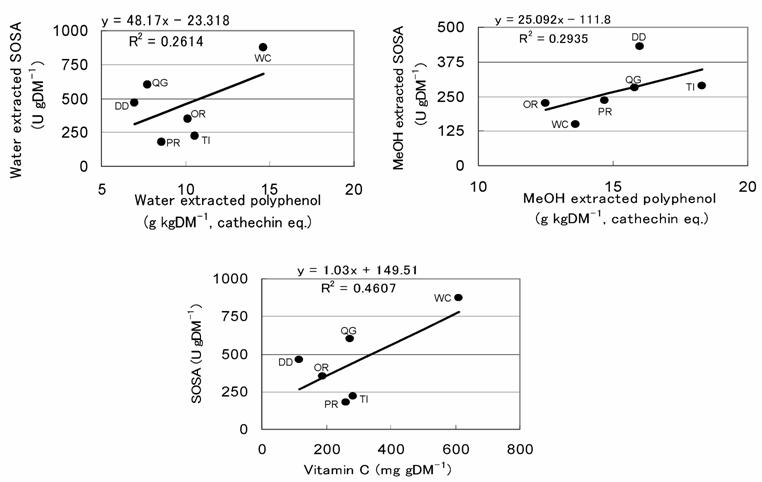 From the present experiments it could be con­cluded that the antioxidant properties represented by both water and MeOH-extractable SOSA vary largely among species of the herbs and pastures available in northern Japan, and also vary depending on the altitud­inal location. As a pioneer experiment, the re­sults are promising and some of the species, especially PL, WC, DD, QG and TI, could be used as natural sources of antioxidants against superoxide radicals to protect animals from adverse effects of O2・-. How­ever, based on the present experiments, further re­search should be performed to clarify specific antioxi­dants and their mode of actions in order to proper selection and combination of the herbs and pastures to improve the animal health ensuring the quality of animal products.

11. Collomb M, Butikofer U, Sieber R, Jeangros B, Bosset JO. Correlation between fatty acids in cows' milk fat produced in the lowlands, mountains and highlands of Switzerland and botanical composition of the fodder. Int Dairy J. 2002;12:661-666