This study aimed to identify single nucleotide polymorphism (SNP) alleles at multiple loci associated with racial differences in skin color using SNP genotyping. A total of 122 Caucasians in Toledo, Ohio and 100 Mongoloids in Japan were genotyped for 20 SNPs in 7 candidate genes, encoding the Agouti signaling protein (ASIP), tyrosinase-related protein 1 (TYRP1), tyrosinase (TYR), melanocortin 1 receptor (MC1R), oculocutaneous albinism II (OCA2), microphthalmia-associated transcription factor (MITF), and myosin VA (MYO5A). Data were used to analyze associations between the 20 SNP alleles using linkage disequilibrium (LD). Combinations of SNP alleles were jointly tested under LD for associations with racial groups by performing a χ2 test for independence. Results showed that SNP alleles at multiple loci can be considered the haplotype that contributes to significant differences between the two population groups and suggest a high probability of LD. Confirmation of these findings requires further study with other ethnic groups to analyze the associations between SNP alleles at multiple loci and skin color variation among races.

The evolution of new traits has allowed humans to adapt to complicated and challenging environmental conditions. Human skin color variations, which are regulated by the expression of melanin, represent an environmental adaptation to different levels of exposure to ultraviolet (UV) rays. For example, people indigenous to Northern Europe have pale skin, while people indigenous to Africa have dark skin. At low latitudes, melanin production is increased to protect against continual exposure to UV irradiation. At high latitudes, melanin production is decreased, which increases the body's ability to synthesize vitamin D, offering a variety of health benefits, including protection against rickets (osteomalacia) [1-3].

Although variations in human skin color are associated with environmental factors such as levels of UV radiation, the genetic mechanism underlying the regulation of human skin color is still unclear. Several studies of skin pigmentation have reported polymorphisms in genes associated with skin color, such as the melanocortin 1 receptor (MC1R), oculocutaneous albinism II (OCA2), and agouti signaling protein (ASIP). Nevertheless, human skin color variation is thought to likely be controlled by interactions among multiple loci at alleles known to contain single nucleotide polymorphisms (SNPs) [4-11]. This study was undertaken to clarify the molecular basis for the genetic background of human skin color by investigating how interactions between SNP alleles at multiple loci contribute to variations in skin pigmentation.

This study compared Caucasoid and Mongoloid cohorts of different skin colors. The genetic data obtained from 122 Caucasian subjects from a previous study [1] was used for analysis in this report. Genetic data was also collected from 100 Mongoloid subjects living in Japan, and the sample collection and melanin measurements were conducted in accordance with a protocol approved by the Human Subjects Research Committee of Shibaura Institute of Technology, Japan (Research project #06-002).

Subjects provided informed consent for the collection of buccal samples. Samples were anonymously coded, and the melanin skin pigmentation index was determined using the Mobile Mexameter MSC100/MX18 (Integral Corporation, Shinjuku-ku, Tokyo, Japan), which uses photodiode arrays to measure the intensity of particular wavelengths of light. Two measurements were obtained from the back as an index of inherent skin color influenced by genetic factors, and two measurements were obtained from the cheek as an index of modified skin color influenced by environmental factors.

The allele discrimination assay consisted of PCR amplification of multiple SNP alleles at a particular locus using specific primers with tags differing in molecular weight. For this assay, the purified PCR products were combined with two hemi-nested allele-specific primers and two universally tagged Masscode oligonucleotide primers. Each tag was covalently attached to the 5' end of an oligonucleotide primer via a photolabile linker. Following PCR amplification, the SNP-specific PCR products were passed through a QIAquick 96 silica-based filter membrane to remove unincorporated tagged primers. The filtered PCR products were exposed to a 254-nm mercury lamp to cleave the incorporated tags, and the tags were analyzed using an optimized Agilent 1100 single quadrupole mass spectrometer. The presence of a particular tag indicated the presence of the corresponding SNP allele in the genomic DNA sample. Genotype data were reported in a comma-delimited flat-file format that contained the SNP and sample identifiers for each allele detected. Alleles were reported using binary nomenclature, in which l represented wild-type alleles and 2 represented variant alleles. The SNP allele was classified into three types: wild-type homozygous, variant-type homozygous, and heterozygous. Thus, a homozygous wild-type allele was designated as 1,1 and a heterozygous allele was designated as 1,2 [18-19].

Table 1 shows the genotype and allele frequencies for the 20 SNPs in the Caucasoid and Mongoloid groups speculated to contribute to differences in skin color between races. Cluster analysis showed that each racial group formed a separate cluster, except for one Mongoloid subject that was included in the Caucasoid cluster (Figures 1 and 2).

Genotypes and allele frequencies for 20 SNPs in Caucasoid and Mongoloid populations. 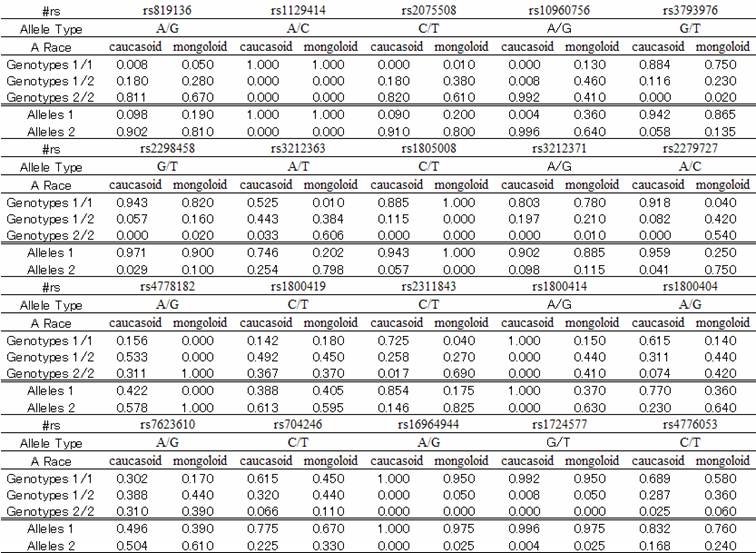 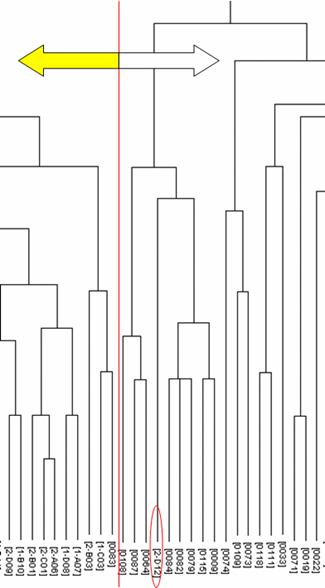 The allele combination rs1800419-C/rs1800414-G/rs1800404-G was associated with the Mongoloid group (p = 5.39 x 10-20). These alleles are found in the gene for oculocutaneous albinism II on chromosome 15, and formed a haplotype. The protein encoded by this gene controls the transport of tyrosine, a precursor of melanin, into the melanosome for melanin synthesis.

The allele combination rs2311843-C/rs1800404-A/rs4776053-C was associated with the Caucasoid group (p = 5.51 x 10-33). These alleles are found in the genes for oculocutaneous albinism II and myosin VA on chromosome 15, and formed a haplotype. Myosin VA functions in vesicle transport, and mutations in this gene confer a lighter skin color due to defects in actin-based pigment granule transport within melanocytes; the pigmentation variation is believed to be due to abnormal distribution of melanosomes along the dendrites of melanocytes [21].

There were significant differences in the allele combinations (i.e., haplotypes) between the two racial groups. The allele combination rs2311843-C/rs1800404-A/rs4776053-C was associated with the Caucasoid group. The rs4776053 allele was in the myosin VA gene found only in the Caucasoid group, and the other alleles of the combination, rs2311843 and rs1800404, were both in the oculocutaneous albinism II gene, found in both groups. Thus, the rs4776053 allele that was only associated with the Caucasoid group could be considered to confer lighter skin color. The rs4776053 allele in the myosin VA gene exhibits a C/T variation, and the allele frequencies for this genotype were 83.2/16.8 (C/T) for Caucasoid and 76.0/24.0 for Mongoloid groups. The high frequency of the C variant in the Caucasoid group suggested that rs4776053-C could be a SNP allele that confers lighter skin color. This result suggests that the lighter skin pigmentation observed in Caucasoid populations is the result of positive selection on different loci in different human populations [4].

As previously mentioned, it was not possible to analyze the two groups (low and high melanin groups) in the Mongoloid cohort by linkage disequilibrium (LD) due to the low sample numbers obtained for each group. On the other hand, the results of the LD analysis of the racial groups (Caucasoid and Mongoloid groups) showed that SNP alleles at multiple loci that contributed to racial differences were on the same chromosome and are likely to form haplotypes.

Every gene has variable SNPs that may constitute haplotypes; some haplotypes are present in all populations, and some are population-specific [22]. The haplotypes associated with skin color differences between the Caucasoid and Mongoloid races are population-specific haplotypes. For most genes, haplotypes represent an opportunity for functional adaptation and diversification [22]. Consistent with this idea, the haplotypes identified in this study are the result of adaptation to different UV ray intensities. This study adds to the growing evidence of genetic variability in different geographically isolated populations with regard to skin color.

In spite of recent advances in gene identification and functional analysis, much work remains to elucidate the underlying genetic mechanisms regulating normal human skin pigmentation [6]. Our previous study was undertaken to discover the genetic basis of the substantial differences in melanin content between groups with low and high melanin among 122 Caucasoid subjects. Our results demonstrated that gene-gene interactions between SNP alleles at multiple loci contributed to inter-individual skin color variation (i.e. low/high melanin content) while suggesting a high probability of linkage disequilibrium (LD) [1]. This study aimed to discover the genetic basis of the physiological trait differences in skin color between Caucasoid and Mongoloid subjects. Our results showed that SNP alleles at multiple loci that contributed to racial differences in skin color were statistically dependent, indicating a high probability of LD structure. Confirmation of these findings requires further study with other ethnic groups, such as with a Negroid population, to analyze the associations between SNP alleles at multiple loci and racial differences in skin color. Clarifying these associations not only unravels the mechanisms regulating an interesting physiological trait, but also provides a model or test system for gene discovery in other polygenic traits (like complex diseases) that exhibit greater environmental sources of variation [6]. There is a clear justification for adopting an evolutionary approach in exploring human pigmentation genetics. These have already revealed a trait with a highly dynamic and complex evolutionary past and pointed to the molecular mechanisms underlying phenotypic variability [6], the most recently identified by the signature of selection in the functionally important SLC24A5 and POMC genes [23-24]. The identification and analysis of additional genes involved in human skin pigmentation and the functional characterization of the allelic variants at the candidate loci presented here will help clarify the nature and extent of skin pigmentation adaptation in human populations [4].

Quantitative trait loci for a quantitative trait, such as skin pigmentation, will often manifest complex genotype-phenotype relationships, such as gene-gene interactions and pleiotropy [25-26]. Future studies await the development of analytical methods for identifying the variation in SNP allele combinations at multiple loci that determine the phenotypic variations in samples obtained from the back (an index of inherent skin color). Moreover, future studies using samples obtained from the cheek (an index of modified skin color) may clarify the diversity of the functional potential of melanin synthesis against UV rays.

This work is supported by the Ministry of Education, Culture, Sports, Science, and Technology grants.

The authors have declared that they have no conflict of interest.