The steroid receptor coactivator-3 (SRC-3), also known as AIB1, ACTR, p/CIP and NCOA3, is a transcriptional coactivator for nuclear receptors and certain other transcription factors. SRC-3 is widely expressed and plays important physiological functions and pathogenic roles in breast and prostate cancers. SRC-3 knockout (SRC-3-/-) mice display genetic background-dependent embryonic lethality and multiple local and systemic abnormalities. Since both the partial lethality and the systemic effects caused by global SRC-3 knockout interfere with downstream investigation of tissue-specific function of SRC-3, we have generated floxed SRC-3 (SRC-3f/f) mice with conditional alleles carrying loxP sites in introns 10 and 12 by a gene-targeting strategy. The two SRC-3f/f mouse lines (A and B) are indistinguishable from wild type mice. To test if deletion of the floxed exons 11 and 12 for SRC-3 nuclear receptor interaction domains and disruption of its downstream sequence for transcriptional activation domains would inactivate SRC-3 function, SRC-3f/f mice were crossbred with EIIa-Cre mice to generate SRC-3d/d mice with germ line deletion of the floxed SRC-3 gene. Both lines of SRC-3d/d mice exhibited growth retardation and low IGF-I levels, which was similar to that observed in SRC-3-/- mice. The line A SRC-3d/d mice showed normal viability, while line B SRC-3d/d mice showed partial lethality similar to SRC-3-/- mice, probably due to variable distributions of genetic background during breeding. These results demonstrate that the floxed SRC-3 mouse lines have been successfully established. These mice will be useful for investigating the cell type- and developmental stage-specific functions of SRC-3.

The steroid receptor coactivator-3 (SRC-3), also known as AIB1, ACTR, p/CIP and NCOA3, is a member of the p160 SRC coactivator family that also contains SRC-1 (NCOA1) and SRC-2 (TIF2, GRIP1, NCOA2) (1). SRC-3 interacts with ligand-activated nuclear receptors such as receptors for estrogen, androgen and progesterone and certain other transcription factors such as E2F1, PEA3 and AP-1 (1-5). SRC-3 enhances gene transcription by recruiting histone remodeling enzymes including CBP (cAMP response element-binding protein binding protein), p300 and p/CAF (p300 and CBP associated protein) histone acetyltransferases and the coactivator-associated methyltransferase 1 (CARM-1) to the target gene promoter (reviewed in (1)). SRC-3 has been designated as a proto-oncogene based on the following: SRC-3 is overexpressed in subgroups of human breast and prostate cancers (6-8); SRC-3 is required for breast and prostate cancer cell proliferation and survival in culture (8-10); SRC-3-deficient mice are resistant to oncogene- and carcinogen-induced mammary gland and prostate carcinogenesis and metastasis (11-14); and ectopic overexpression of SRC-3 in mouse mammary epithelial cells is sufficient to induce mammary tumorigenesis (15).

Although SRC-3-/- mice have provided valuable information regarding fundamental genetic functions of SRC-3, the diverse and systemic effects of global SRC-3 deficiency have hindered our understanding of tissue- and cell type-specific and developmental stage-specific functions of SRC-3. In order to circumvent these limitations, we have generated and validated mouse lines carrying a floxed SRC-3 allele that is appropriate for Cre-mediated tissue-specific inactivation of the SRC-3 gene. 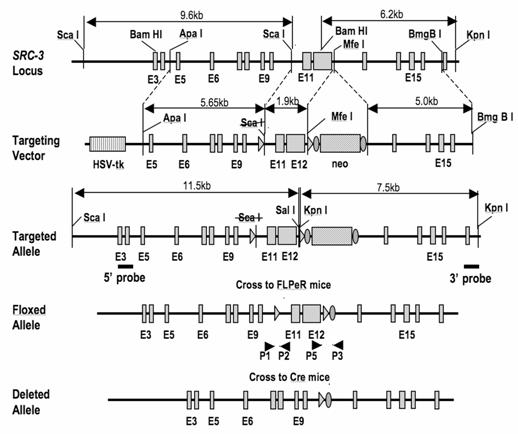 The correctly targeted ES clones were microinjected into C57/BL6 morulas to generate chemeric founder mice. The male chimeric mice were kept for breeding with female C57BL/6 mice to test germ line transmission of the targeted SRC-3 locus. Next, the male chimeric mice with proven germ line transmission ability were bred with the 129SvEv FLPeR mice (Stock #003946, Jackson Lab) (26) to remove the Frt-flanked neo expression cassette (Fig. 1). Finally, the FLPeR allele was excluded in incoming generations and the floxed SRC-3 allele was excised in germ line by breeding with the C57BL/6 EIIa-Cre transgenic mice (Stock #003724, Jackson Lab) (27).

Male mice were weighed at 4, 8 and 12 weeks of age. Blood samples were collected from 12-week-old mice and serum samples were prepared and frozen at -80°C until analysis. Serum IGF-1 concentrations were measured using an ELISA kit (DSL-10-29200, Diagnostic Systems Lab.) by following the manufacturer's instruction. Results are presented as mean ± standard deviation. Statistical analysis was performed using unpaired Student's t test with p<0.05 to be considered as significant difference.

The mouse SRC-3 gene spans about 79 kb in length and contains 23 exons, and it encodes a 160-kD protein with 1403 amino acid residues (23). SRC-3 protein contains an N-terminal basic helix-loop-helix/PAS (Per/ARNT/Sim) domain, a central nuclear receptor interaction domain with multiple LXXLL (L, leucine, X, any amino acid residue) motifs, and a C-terminal transcriptional activation domain (1, 28). To obtain a floxed SRC-3 allele appropriate for Cre-mediated conditional inactivation of the SRC-3 gene, we designed and constructed a targeting vector that could knock in one loxP site into intron 10 and another loxP site into intron 12 through homologous recombination in mouse ES cells. The targeting vector contains a 5.65-kb 5' targeting arm, a floxed 1.9-kb DNA fragment spanning exons 11 and 12 and intron 11, a neo expression cassette for positive selection, a 5-kb 3' targeting arm and a tk expression cassette for negative selection (Fig. 1). The floxed exons 11 and 12 encode the nuclear receptor interaction domain of SRC-3 (23, 28). In addition, the deletion of exons 11 and 12 would also cause a coding-frame shift between exons 10 and 13 and result in disruption of the C-terminal polypeptide sequence of SRC-3 (Fig. 1).

After the TC-1 mouse ES cells were electroporated with the targeting vector DNA and cultured in selection medium with G418 and FIAU, 288 survived clones were isolated and DNA samples were prepared from these clones for Southern blot screening. The 3' probe detected 10 clones with a 7.5-kb targeted allele band in addition to a 6.2-kb wild type (WT) allele band after DNA samples were digested with Bam H1 and Kpn I (Fig. 1 and Fig. 2B). Four of these positive clones also showed correct recombination at the 5' location, exhibiting a 11.5-kb targeted allele band in addition to a 9.6-kb WT allele band on Southern blot using the 5' probe after DNA was digested with Sca I and Sal I (Fig. 1 and Fig. 2A). A neomycin probe was also used to confirm the sole homologous integration locus of the targeting vector at the SRC-3 gene in the targeted ES cells (Fig. 2C). These results demonstrate that multiple targeted ES clones with the floxed SRC-3 allele had been successfully generated. Since this targeted allele contains an Frt-flanked neo cassette, this allele is designated as SRC-3f-neo. 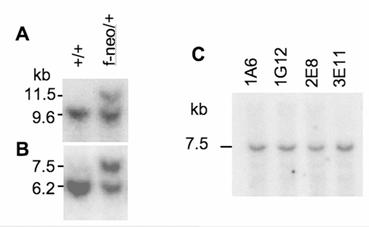 Correctly targeted ES clones were microinjected into C57BL/6 blastocysts to generate chimeric mice. Male chimeras were kept for testing germ line transmission of the SRC-3f-neo allele by crossing with C57BL/6 female mice and by examining the coat color of their offspring. Agouti coat indicates a germ line transmission from the 129SvEv ES cell, while black coat indicates a C57BL/6 blastocyst donor origin. A total of 7 chimeric founder mice were identified to have germ line transmission capability. Two of these founder mice (lines A and B) were crossed with female FLPeR mice (26) to remove the Frt-flanked neo cassette in their pups with an SRC-3f-neo/+/FLPeR+ genotype. In these pups, the flippase recombinase (FLP) was ubiquitously expressed and its expression resulted in excision of the Frt-flanked neo cassette in the SRC-3f-neo allele. As shown in Fig. 3, PCR analyses detected WT and targeted alleles in FLPeR-negative SRC-3f-neo/+ mice (Fig. 3A) and WT and floxed alleles in FLPeR-positive and neo-negative SRC-3f/+ mice (Fig. 3B). Subsequently, SRC-3f/+ breeding pairs were used to generate WT and SRC-3f/f mice that were negative of both neo cassette and FLPeR. Because the normal function of the SRC-3 gene is required for somatic growth and normal IGF-I levels, we measured body growth rates and serum IGF-I levels and found no differences between WT and SRC-3f/f littermates with a pure 129SvEv strain background (Fig. 4, A & B). These results indicate that the SRC-3f allele has normal function identical to the SRC-3+ allele. 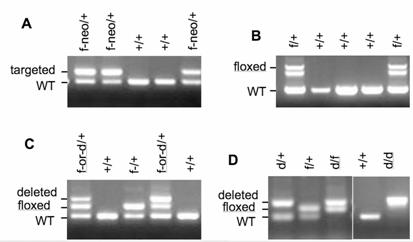 Measurements of body weight and serum IGF-I levels. A & B. SRC-3f/f and WT mice showed identical somatic growth patterns and similar serum IGF-I levels. The body weights of male WT (n=16) and SRC-3f/f (n=20) mice with a 129SvEv strain background were measured at ages indicated. Blood samples were collected from 12-week-old male WT (n=11) and SRC-3f/f (n=11) mice for IGF-I measurement. C & D. SRC-3d/d mice exhibit growth retardation and low IGF-I levels. The body weights (Panel C) and serum IGF-I concentrations (Panel D) of male WT and SRC-3d/d mice with a mixed strain background of C57BL/6 and 129SvEv were measured as that in Panels A & B. **, p < 0.005 and *, p < 0.05 by unpaired t-test. 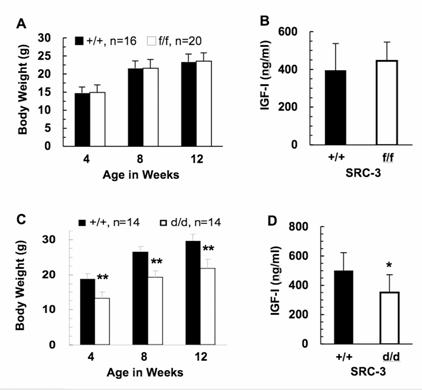 For both lines A and B, SRC-3d/+ mice were slightly smaller than age-matched WT mice (Data not shown). However, both male and female SRC-3d/d mice were significantly smaller than WT mice at all ages examined, including 4, 8 and 12 weeks (Fig. 4C for line A, and data for line B not shown). When measured at 12 weeks of age, SRC-3d/d mice also had a remarkable reduction in serum IGF-I levels compared with age-matched WT mice (Fig. 4D for line A, and data for line B not shown). The growth defect and low levels of IGF-I phenotypes observed in SRC-3d/d mice closely resemble the SRC-3 knockout mice (16). These results demonstrate that excision of the floxed region (exons 11 and 12) of the SRC-3f allele results in a loss-of-function mutant of the SRC-3 allele.

Since SRC-3 is identified as a transcriptional coactivator, many studies have been performed to explore its normal functions in development, metabolism, reproduction and cardiovascular system, and its pathogenetic roles in hormonally promoted breast and prostate cancers (11-13, 15, 16, 18-20, 29). Because no germ line mutation has been found to link SRC-3 to a human disease, the knowledge regarding most of the SRC-3 in vivo functions is gained from SRC-3 knockout and transgenic mice. Although these mouse models provide valuable information, their limitations of systemic effects caused by global SRC-3 deficiency have made it difficult to assign certain phenotypes and their molecular basis to a specific cell type or a specific developmental stage. In order to use the Cre-loxP system to inactivate SRC-3 in either a cell type-specific or a developmental stage-specific way, we have generated SRC-3f/f mice using a gene targeting strategy in this study. SRC-3f/f mice exhibit normal somatic growth and normal IGF-I levels and are indistinguishable from WT mice, indicating that insertion of the loxP sites has no effect on the SRC-3 gene function.

In SRC-3f/f mice, the paired loxP sites are located in introns 10 and 12. The floxed exons 11 and 12 encode the essential nuclear receptor interaction domain and the deletion of these two exons also disrupts the downstream coding frame. As expected, in our testing experiments deletion of the floxed SRC-3 alleles in SRC-3d/d mice caused postnatal growth retardation and low levels of circulating IGF-I, which are two of the major defects observed in SRC-3 knockout mice (1, 16, 18). These results demonstrate that Cre-mediated excision of the floxed SRC-3 allele disrupt the function of the SRC-3 gene. Intriguingly, the two lines of SRC-3d/d mice exhibit different viability. The line A SRC-3d/d mice have a normal viability while the line B SRC-3d/d mice show a partial lethality. This discrepancy may be caused by uneven distributions of 129SvEv and C57BL/6 strain backgrounds in these two lines of mice during the breeding process. In agreement with this explanation, our recent studies have revealed that the lethal degrees of SRC-3-/- mice are dependent on strain background. Lesser, medium and severe degrees of lethality are found in SRC-3-/- mice with a 129SvEv, a mixed 129SvEv/C57BL/6 and a C57BL/6 strain background, respectively ((16) and unpublished results).

We thank Dr. Chuxia Deng for ES cells, Dr. James Martin for the pFRT-loxP plasmid, and Ms. Jenny Xia and Dr. Robert B. York for critical reading of the manuscript. This work is partially funded by DK58242, CA112403 and CA119689 grants from National Institutes of Health.