Top
Introduction
The Hypothesis
The Hypothesized Main Steps
The Main Differences Between Our...
The Significance of Our...
Acknowledgements
References

It is a commonly held belief that prostate carcinogenesis is a multi-stage process and that tumor invasion is triggered by the overproduction of proteolytic enzymes. This belief is consistent with data from cell cultures and animal models, whereas is hard to interpret several critical facts, including the presence of cancer in “healthy” young men and cancer DNA phenotype in morphologically normal prostate tissues. These facts argue that alternative pathways may exist for prostate tumor invasion in some cases. Since degradation of the basal cell layer is the most distinct sign of invasion, our recent studies have attempted to identify pre-invasive lesions with focal basal cell layer alterations. Our studies revealed that about 30% of prostate cancer patients harbored normal appearing duct or acinar clusters with a high frequency of focal basal cell layer disruptions. These focally disrupted basal cell layers had significantly reduced cell proliferation and tumor suppressor expression, whereas significantly elevated degeneration, apoptosis, and infiltration of immunoreactive cells. In sharp contrast, associated epithelial cell had significantly elevated proliferation, expression of malignancy-signature markers, and physical continuity with invasive lesions. Based on these and other findings, we have proposed that these normal appearing duct or acinar clusters are derived from monoclonal proliferation of genetically damaged stem cells and could progress directly to invasion through two pathways: 1) clonal in situ transformation (CIST) and 2) multi-potential progenitor mediated “budding” (MPMB). These pathways may contribute to early onset of prostate cancer at young ages, and to clinically more aggressive prostate tumors.

The normal prostate luminal cells, which are the histological origin of most prostate malignancies, are physically separated from the stroma by the basal cells and basement membrane (BM). Basal cells are joined by intercellular junctions and adhesion molecules, constituting a continuous sheet encircling luminal cells [1-2]. The BM is composed of type IV collagen, laminins, and other molecules, forming a continuous lining surrounding and attaching to the basal cell layer [3-4]. The epithelium is normally devoid of blood vessels and lymphatic ducts, and totally relies on the stroma for its metabolic and even survival needs. Because of these structural relationships (Fig 1), the disruption of both the basal cell layer and the BM is a pre-requisite for prostate tumor invasion or metastasis.

It is a commonly held belief that human prostate carcinogenesis is a multistage process, progressing sequentially from normal to hyperplasia, to prostatic intraepithelial neoplasia (PIN), and to invasive or metastatic stages [5-8]. Progression from PIN to invasion is believed to be triggered by overproduction of proteolytic enzymes primarily by cancer cells, which cause degradation of the BM [9-10]. These theories are consistent with results of studies in tissue cultures and animal models, whereas are hard to interpret the following critical facts:

Together, these facts argue that alternative pathways may exist, because if the linear model of tumor progression and invasion is universally applicable, the normal prostate tissues of healthy subjects should not harbor malignant structural abnormalities. Since over 90% of prostate cancer related mortality result from invasion-related illness, and the incidence of PIN could be up to 16.5%-25% in prostate biopsies [24-28], there is an urgent need to uncover the intrinsic mechanism of tumor invasion.

Structural relationships among the epithelium (EP), basal cell layer (BCL), basement membrane (BM), and stroma (ST). Section was double immunostained for the BM (brown) and BCL (red). a: 100X b: a higher (300X) magnification a.

Of the 17 cases with a high frequency of FBCLD, the basal cell layer had several unique alterations that were not or rarely seen in their morphologically similar counterparts in other cases [33-44]:

p63 expression in basal cell layers with and without focal disruption

b. significantly reduced expression of proliferating cell nuclear antigen (PCNA): In sections double immunostained for PCNA and CK4ßE12, an average of 74% of the normal basal cells showed PCNA expression, but only 51% of basal cells in disrupted basal layers were PCNA positive (Fig. 4; Table 3).

PCNA expression in basal cell layers with and without focal disruption 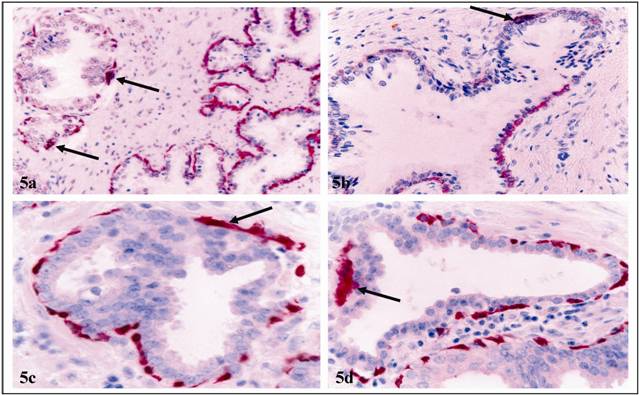 FBCLD and leukocyte infiltration. Double immunostained for CK34ßE12 (red) and LCA (brown). Arrows identify infiltrates within EP or near FBCLD. No LCA infiltration was seen in ducts with non-disrupted basal cell layers (asterisks). a; 100X. b: a higher (300X) magnification of a. 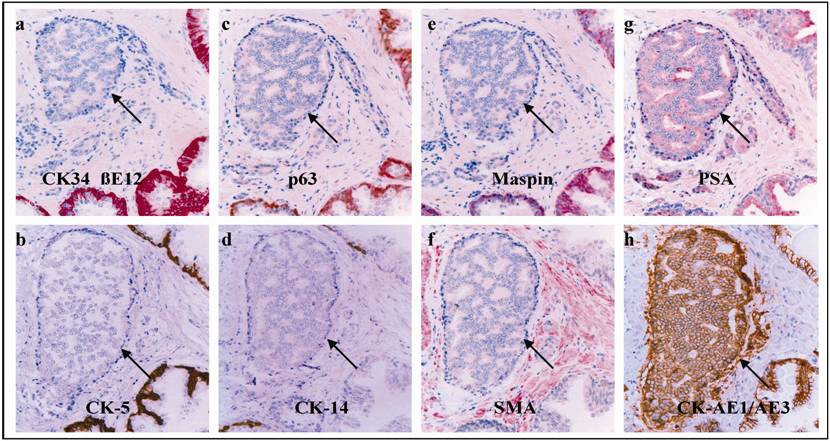 In addition, these basal cell layers were devoid of expression of PCNA, in contrast to normal basal cells and associated tumor cells, which were strongly positive for PCNA (Fig. 9). Ducts or acini with altered basal cell layers had a significantly higher frequency of mast cell infiltration (Fig 9; Table 5).

Together, these findings suggest that the basal cell layers in these patients have significantly higher degenerative alterations. As the basal cell layer is the sole source of several tumor suppressors [29-32], degenerated basal cells are very likely to have impaired or reduced functions.

Increased proliferation in ducts with FBCLD. Sections were double immunostained for CK 34ßE12 (red) and Ki-67 (brown). Arrows identify proliferating cell clusters. Note that in a-b, KI-67 positive cells are seen in ducts with FBCLD, but not in adjacent ducts without FBCLD (square). a & c: 100X. b & d: a higher (400X) magnification of a and c, respectively.

c. physical continuity with, and morphological resemblance to, invasive prostate cancer: A vast majority of these normal appearing clusters were adjacent to, or blended within, invasive cancers. In some cases, cells overlying FBCLD had significantly enlarged nuclei and nucleoli, and were in physical continuity with, or morphologically similar to, their adjacent invasive counterparts (Fig 12). 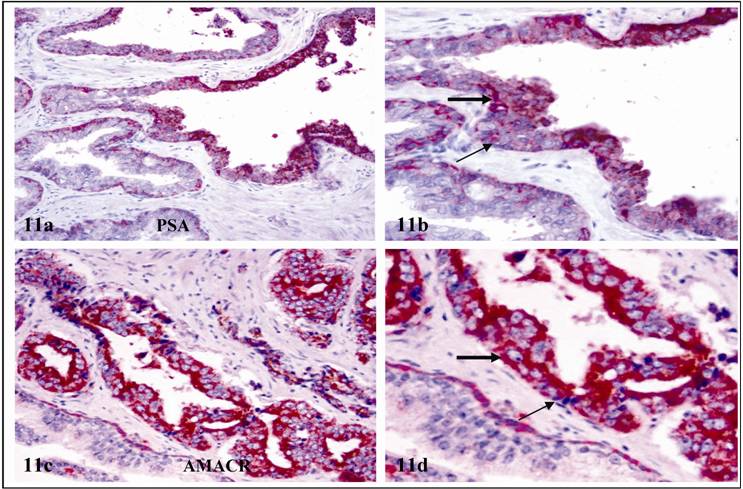 In some cases, multiple epithelial cell nests appeared to be “budding” from the same acinus or duct (Fig.13). These “budding” cells had a higher proliferation and were similar to adjacent invasive cancer cells. The only difference was that “budding” cells had residual basal cells (Fig 13, thin arrows). 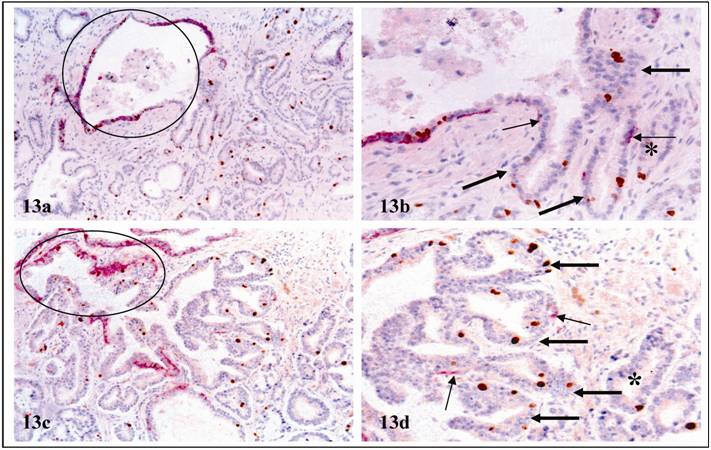 The above alterations were consistently seen in all 17 cases with a high frequency of FBCLD, while were only seen in 1 (9.1%) of the 11 cases with a low frequency of FBCLD, and in none of the 22 cases with non-disrupted basal cell layers. Together, these findings suggest that the physical and functional status of the basal cell layer significantly impact the biological presentation of associated epithelial cells. These findings also suggest that FBCLD may represent a trigger factor for prostate tumor progression and invasion.

To our best knowledge, our findings have not been previously reported by others. The most likely reasons are: [1] the enzyme theory has dominated the direction of researches in the field, and the roles of basal cells have been ignored; [2] these alterations could be seen only by double immunohistochemistry to simultaneously elucidate both basal cells and other markers. Double immunostaining, however, has not been commonly used in clinical studies.

Based on the above findings, we have proposed that these normal appearing duct or acinar clusters represent a population of maturation arrested tumor progenitors derived from monoclonal proliferation of genetically damaged primitive stem cells at early stages of the prostate morphogenesis probably by trauma, radiation, inflammation, or other factors. These clusters retain the potential for unlimited cell proliferation or multi-lineage differentiation, and could progress directly to invasive lesions through two different pathways: (1) clonal in situ transformation (CIST), and (2) multi-potential progenitor mediated “budding” (MPMB). These pathways are likely to contribute to early onset of prostate cancer at young ages, and to biologically and clinically more aggressive prostate tumors.

Our hypothesized main steps are the followings:

The Main Differences Between Our Hypothesis And Previous Theories

Based on our own and other findings, we had proposed that prostate tumor invasion is triggered by localized degeneration of the basal cells and leukocyte infiltration induced auto-immunoreactions, which selectively favor monoclonal proliferation and invasion of progenitor or stem cells overlying FBCLD [43]. Our hypothesis differs from the traditional theories of tumor invasion in 5 aspects: (1) the stage of tumor invasion, (2) the cellular origin of invasive lesions, (3) the significance of immunoreactive cells, (4) the significance of stromal cells, and (5) the potential approaches for interventions and prevention of tumor invasion. Our studies of breast tumors have obtained similar results and conclusions [65-74]. Our new hypothesis is the expansion of our previous one with the following new points of views:

a. the preservation of large clusters of genetically damaged stem or progenitor cells: Our previous hypothesis proposes that cell clusters overlying FBCLD represent tumor stem or progenitor cells, which undergo a series of immunohistochemical and morphologic changes, and finally transform into invasive lesions [43]. Our current hypothesis suggests that it is also possible that multiple genetically damaged primitive stem or progenitor cells within the same site may form large duct or acinar clusters that harbor the same genetic defects. These clusters may be formed immediately after external or internal insults during the early stage of morphogenesis, and progress rapidly, leading to early onset of prostate cancer at young ages. These clusters could also become maturation arrested at patients' early ages, while they retain the potential for unlimited proliferation and multi-lineage differentiation, representing “bad seeds for bad crops” at later ages.

b. direct transformation of the entire duct or acinar cluster into invasive lesions: Our previous hypothesis proposes that invasive cells are derived exclusively or preferentially from monoclonal proliferation of stem or progenitor cells overlying FBCLD [43]. Our current hypothesis suggests that, in addition to monoclonal proliferation, it is possible that the entire duct or acinar cluster may directly transform into invasive lesions after the disappearance of all surrounding basal cells and the basement membrane.

c. angiogenesis by genetically altered tumor stem cells: Our previous hypothesis proposes that a subset of luminal cell clusters overlying FBCLD are in direct physical continuity with vascular- or lymphatic duct-like structures, which allows them to progress directly to metastasis [43]. Our current hypothesis further suggests that some normal appearing duct or acinar clusters may retain genetically damaged primitive stem cells that could manufacture their own blood vessels or lymphatic ducts, which directly lead to metastasis.

The Significance of Our Hypothesis

Our hypothesis, if confirmed, could have several significant implications. Scientifically, it could lead to a new direction to explore novel approaches for early detection, intervention, and prevention of prostate tumor invasion. For example, as non-disrupted basal cell layers have significant inhibitory functions on epithelial cell growth, the development of therapeutic agents to stimulate basal cell growth or regeneration may provide a more effective approach for treatment and prevention of prostate cancer invasion. Clinically, it could potentially bring the following benefits:

More importantly, our hypothesis may be also applicable to progression and invasion of other epithelium derived tumors.

This study was supported in part by grants DAMD17-01-1-0129, DAMD17-01-1-0130, PC051308 from the US Congressionally Directed Medical Research Programs, grant BCTR0706983 from The Susan G. Komen Breast Cancer Foundation, grant 05AA from the AFIP/ARP joint research initiative project to Dr. Yan-gao Man, and grant 2006CB910505 from the Ministry of Chinese Science and Technology Department to Drs. Zhang Xichen, Yan-gao Man, and Gui-yuan Li.