On the basis of high enzyme activity a newly isolated strain of L. mesenteroides CMG713 was selected for dextran production. For maximum yield of dextran, effects of various parameters such as pH, temperature, sucrose concentration and incubation period were studied. L. mesenteroides CMG713 produced maximum dextran after 20 hours of incubation at 30ºC with 15% sucrose at pH 7.0. The molecular mass distribution of dextran produced by this strain showed that its molecular mass was about 2.0 million Da. Dextran analysis by 13C-NMR spectrometry showed no signals corresponding to any other linkages except α-(1→6) glycosidic linkage in the main chain, which has not been reported before. Physico-chemical properties of this unique dextran were also studied. These optimised conditions could be used for the commercial production of this unique high molecular weight dextran, which have significant industrial perspectives.

Dextran is an extracellular bacterial polymer of D-glucopyranose with predominantly α- (1→6) linkage in the main chain and a variable amount of α-(1→2), α-(1→3), α-(1→4) branched linkages [1-3]. Other workers have also reported formation of dextran from different strains of bacteria that were primarily Leuconostoc strains. The specificity of the synthesized linkages in the dextran is strain dependent. Among many dextran producing species the dextran produced by L. mesenteroides NRRL B512F and L. mesenteroides NRRL B1299 have been well characterized and classified. Dextran from L. mesenteroides B512F contains 95% of α- (1→6) linkages and 5% of α-(1→3) branch linkages; whereas insoluble dextran from L. mesenteroides 1299 contains 63% α-(1→6), 27% of α-(1→2) and 8% of α-(1→3) linkages [4].

Dextran is a bacterial polysaccharide, which is commercially available, and it is used as drugs, especially as blood plasma volume expander. Dextran has found industrial applications in food, pharmaceutical and chemical industries as adjuvant, emulsifier, carrier and stabilizer [5]. Cross-linked dextran is known as Sephadex, which is widely used for the separation and purification of protein. In food industry dextran is currently used as thickener for jam and ice cream [6]. It prevents crystallization of sugar, improves moisture retention, and maintains flavour and appearance of various food items [7, 8, 9].

Dextran is produced at the industrial level by the fermentation of sucrose-rich media. Several research workers have optimized fermentation conditions for maximum dextran production. It has been reported earlier that molecular weight and yield of dextran production depends on the process variables such as temperature, sucrose and the acceptor concentration [10, 11]. It was also mentioned that medium containing nitrogen source supplemented with different salts increased dextran production.

The present study was aimed to establish optimum conditions for maximum production of dextran, the molecular mass of the product and to analyse the structure of dextran from L. mesenteroides CMG713. In addition physico-chemical properties of this unique dextran were also studied. 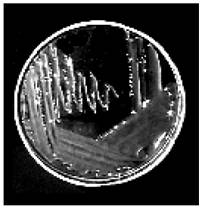 L. mesenteroides CMG713 was selected for this study due to its highest activity of dextransucrase and dextran producing characteristic. Bacterial strain CMG713 was identified according to the Bergey's Manual of Determinative Bacteriology [13] and confirmed by 16s rRNA gene sequencing analysis using universal primers [14].

For all optimization studies, 10.0 ml of overnight culture were inoculated in 90 ml of fresh broth and incubated at 30ºC for 24 hours. This 100 ml fermented broth was used for dextran production.

Effect of substrate concentration, temperature and pH on dextran production

Substrate concentration was varied from 10 to 20% in the culture media and all the flasks were incubated at 30°C for 20 hours. Effect of temperature was studied in the temperature range of 20 to 45ºC with an increment of 5ºC. For temperature optimization 100ml of fresh broths containing 15% sucrose was used. pH of the cultivation media were adjusted from 6.0 to 8.0 with an increment of 0.5 before sterilization and the cultivation media were incubated at 30ºC for 20 hours.

The culture medium after 20 hours was precipitated using equal volume of chilled ethanol, shaken vigorously, centrifuged at 10,000 rpm for 15 minutes and the supernatant was decanted. This step was repeated twice. The precipitated dextran was dried under vacuum over calcium chloride at 30ºC. The dextran yield was calculated on dry weight basis.

For removal of impurities dextran obtained from precipitation was dissolved in distilled water. The dextran slurry was again precipitated with equal volume of chilled ethanol. This procedure of re-dissolving, precipitation and washing was repeated thrice to remove cells debris. Purified dextran was dried under vacuum over calcium chloride at 30ºC [15, 16].

Dextran solution (5%) was used as a stock solution for viscosity measurement at 25ºC using an Ostwald Viscometer [17].

The 13C-NMR spectra of the dextran was recorded as reported earlier [24] with a Bruker AC 400 spectrometer operating at a frequency of 100.624 MHz. Samples were examined as solutions in D2O at 25ºC in 5-mm diameter spinning tubes. The chemical shift values are reported in ppm (δ). Various signals were assigned as described by Seymour et al. [25] and Remound et al. [26].

Identification of the Organism

Taxonomic assessment of the isolated strain confirmed the characteristic properties of L. mesenteroides and the strain CMG713 was identified as a member of genus L. mesenteroides by 16s rRNA gene analysis [27] (GenBank Accession # DQ208970).

Time Course for the Production of Dextransucrase & Dextran 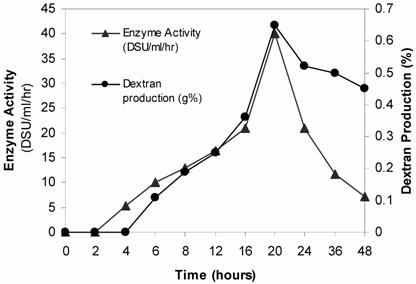 Effect of Substrate (sucrose) on Dextran production by Leuconostoc mesenteroides CMG713. Symbols (means± S.E., n = 6) having similar letters are not significantly different from each other (Bonferroni test, P < 0.05). 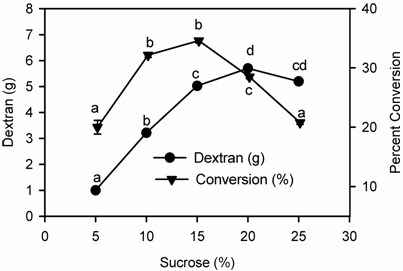 Effect of temperature on Dextran Production

Effect of temperature on Dextran production at different incubation temperatures by Leuconostoc mesenteroides CMG713. Symbols (means± S.E., n = 6) having similar letters are not significantly different from each other (Bonferroni test, P < 0.05). 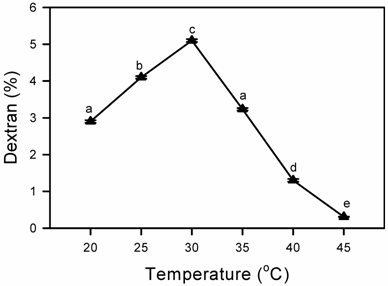 Effect of pH on Dextran Production

Effect of medium pH on dextran production by Leuconostoc mesenteroides CMG713. Symbols (means± S.E., n = 6) having similar letters are not significantly different from each other (Bonferroni test, P < 0.05). 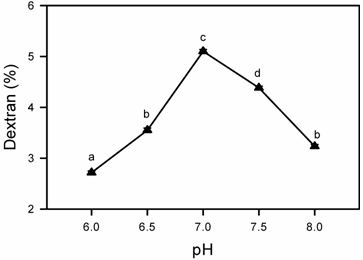 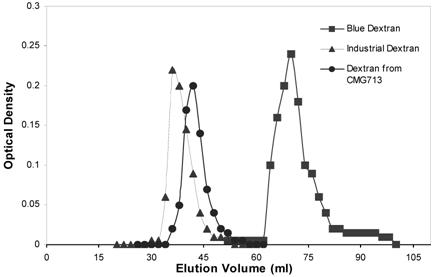 The 13C and 1H-NMR spectra afforded the compelling evidence for the main structural features of dextran. The 13C-NMR spectra of dextran synthesized by dextransucrase from L. mesenteroides CMG713 is shown in Fig.7 (B). 13C-NMR spectrum of dextran from L. mesenteroides CMG713 displayed all the characteristic chemical shifts for α-glucose moiety and revealed that dextran showed the characteristics of predominantly α (1→6) linkage in the main chain. The various signals in the NMR spectra were assigned as described earlier [25, 26]. The structure of the synthesized polymer is comparable to that of dextran NRRL 512(F), except that there were no signals corresponding to any other linkage except α (1→6). The downfield shift of C6 carbon signal of glucose unit at δ 68.5 clearly indicates that the two units of glucose in the polymeric chain have α (1→6) linkage. The chemical shifts of other carbons appeared as normal. The α (1→6) linkage of the polymeric chain was further cross checked by Heteronuclear Multiple Bond Connectivity (HMBC) interactions, shown in figure 7(A). The anomeric proton H-1 (δ 4.83) showed interactions with the neighbouring carbon C-2 (δ 73.0) of the same sugar moiety and with the methylenic carbon C-6 (δ 68.5) of the second sugar moiety, which proves the α (1→6) linkage. Further the H-6 protons (δ 3.75, 3.60) also showed interaction with the neighbouring carbon C-5 (δ 76.3) and also with the anomeric carbon C-1 (δ 100.6) of the other sugar moiety. On the basis of the above evidences it is proved that the linkage of the glucose units in the polymeric chain is almost 100% α (1→6) linkages among the two units, and there are no chances of any other branching like (1→3) linkage; as is present in the reported dextran produced by NRRL B512F [48, 49].

Key HMBC interactions showing (α 1-6) linkage (A), and 13C-NMR analysis (B) of Dextran Synthesized by Dextransucrase from Leuconostoc mesenteroides CMG713.

27. Kullen MJ, Sanozky-Dewas RB, Crowell DC, Klaenhammer TR. Use of the DNA sequence of variable regions of the 16s rRNA gene for rapid and accurate identification of bacteria in the Lactobacillus acidophilus complex. J. Appl. Microbiol. 2000;89:511-516