Birth weight and coronary artery disease. The effect of gender and diabetes

Background: The developmental origin theory of coronary heart disease proposes that undernutrition in utero permanently changes body functions and metabolism leading to an increased risk of coronary artery diseases (CAD) in adult life. Some studies support this theory but others suggest that birth weight (BW) is not a major risk factor for cardiovascular diseases. Gender differences concerning the association between BW and risk factors for CAD have been reported in some studies but not in others.

In this paper we have analyzed the effect of gender and diabetes on the relationship between BW and CAD in the White population of Rome.

Material and Methods: 226 subjects admitted to the Hospital for non fatal CAD from the White population of Rome were studied. 395 consecutive newborn infants studied in the same population in the years 1968-1972 were considered for comparison.

Results: Among subjects with CAD, reliable information on BW was obtained in 127 subjects. The distribution of BW in CAD depends on gender (p=0.009). In females with CAD there is a tendency toward low BW, while in males with CAD there is a tendency toward high BW. These associations are very marked in non-diabetic subjects with CAD (p=.001), while no significant association is observed in diabetic subjects (p=0.557).

The “Developmental origin of coronary hearth diseases” proposes that undernutrition in utero permanently changes body functions and metabolism leading to an increased risk of coronary artery diseases (CAD) in adult life (1). The association between low birth weight (BW) and risk factors for CAD, hypertension and type 2 diabetes reported in various longitudinal studies (2-5) is in line with the developmental theory. Some studies, however, suggest that birth weight may not be a major risk factor for development of hypertension and cardiovascular disease (6,7).

Gender differences in the association between BW and risk factors for CAD have been reported in some studies (8-10), but not in others (11). Wilkins and Murphy (12) have suggested that gender-specific genes affecting insulin sensitivity are responsible for the gender difference in birth weight: females would be genetically less responsive to the trophic effect of insulin resulting in a lower birth weight. Insulin resistance would be a risk factor for CAD.

In the present study we have considered the effect of gender and diabetes on the relationship between BW and CAD.

226 subjects admitted consecutively for treatment of CAD to Valmontone Hospital in Rome, Italy were studied. The sample may be representative of subjects with non fatal CAD living in the area around the Hospital. 395 consecutive newborn infants from the White population of Rome studied between 1968 and 1972 were considered as controls. Among subjects with CAD only 127 were found to have reliable information on birth weight. Informed consent was obtained by the patients to participate in the study that was approved by the Ethical Committee of Valmontone Hospital.

Three way contingency tables were analyzed by a log linear model according to Sokal and Rohlf (13). Given three variables A, B and C by this analysis is possible to study the effect of the categories of a variable (i.e. C) on the association between the other two variables (i.e. A and B). Chi square of independence, T test for difference between means and Logistic Regression were carried out by using the SPSS package (14). Logistic Regression is similar to Discriminant Analysis: it is useful to study the effect of categorical variables to separate classes of a dependent variable.

Table 1 shows the demographic and clinical parameters in the whole CAD sample.

Table 2 shows the distribution of BW in relation to gender. Among CAD cases the distribution of BW classes was found to depend on gender (p=0.009), while in healthy newborns no statistical significant association was observed (p=0.541). Three way contingency table analysis shows a statistically significant interaction confirming that the pattern of association BW-gender observed in CAD cases is different from that observed in healthy newborns. In females with CAD there is a tendency toward a low BW, while in males with CAD there is a tendency toward a high BW.

Table 3 shows the mean birth weight in relation to gender. Among CAD cases BW is higher in males than in females (p=0.001) while no statistically significant difference is observed among healthy newborns (p=0.688).

Distribution of birth weight in relation to gender in subjects with coronary artery disease and in healthy newborns from the same population.

Mean birth weight in relation to gender in subjects with coronary artery disease and in healthy newborns from the same population.

The effect of diabetes on the association between birth weight and gender in subjects with coronary artery disease.

Correlation analysis between BW and systolic and diastolic blood pressure.

Although the present study broadens the field of possible etiological elements of CAD, various limitations are in order.

The sample size is relatively modest and the pattern of associations should be re-examined in larger samples.

The differences between males and females observed in our population could be due to differences in clinical severity leading to different rates of mortality between sexes. Indeed our cases include non fatal CAD only and we have no information on fatal cases.

At present it is unclear which exposure in early life might be responsible for the association between fetal growth and CAD in adult life. Moreover some observations indicate that nourishment before birth is not crucial to adult health (15). The “developmental origin theory” of CAD is generally presented in opposition to the “current orthodoxy” that CAD results from unhealthy life styles with a contribution of genetic factors. The two theories are compatible and many factors may contribute to susceptibility to CAD. Moreover the relationship between BW and CAD could be spurious (fig 1). Section A depicts a true correlation while section B shows that genetic factors influencing BW may independently influence the risk of CAD leading to a spurious correlation between BW and CAD.

Relationship between BW and CAD 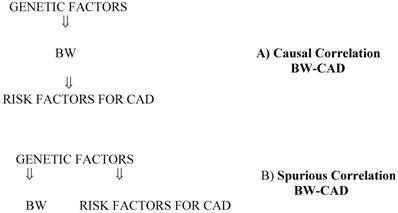 It is becoming increasingly evident that the maternal-fetal relationship has an important role not only in intrauterine survival and development, but also in the well being of offspring during extra uterine life. Additionally, the data presented here suggest that the “developmental origin theory of CAD” deserves increased attention in future investigations.

Several studies point to a significant immune component in the pathogenesis of atherosclerosis that shows many feature of a chronic inflammatory disease (16-18). Moreover it has been recently reported that a genetic polymorphism of PTPN22 (19), known to be associated with autoimmunity, is associated with atherosclerosis (20). Maternal and fetal genetic factors interact during intrauterine life in a manner that influences fetal development and the immunological orientation of the fetus. As a result, these interactions could modify the susceptibility of the individual to those diseases having an immunological component.

Recent studies suggest that microchimerism is a common condition mainly due to the fractures of the placental barrier that allow the passage of cells in both directions during pregnancy. Microchimerism could contribute to immune attacks but may be also beneficial in special conditions (21,21). Thus, the “developmental origin hypothesis of CAD” also reflects an immunological facet that was not included in the original formulation.

Our data confirm the reported association between BW and CAD. However, this association depends on gender: the risk of CAD is correlated negatively to BW in females but positively in males. In the presence of diabetes this pattern of correlation disappears while it is much more evident in subjects without diabetes.

We thank Prof. James MacMurray (Los Angeles CA) for the revision of the manuscript.

11. Lawlor DA, Ebrahim S, Davey Smith G. Is there a sex difference in the association between birth weight and systolic blood pressure in later life? Findings from a meta-regression analysis. Am J Epidemiol. 2002;156:1100-4

Dr. Fulvia Gloria-Bottini is Medical Doctor and Doctor in Mathematics. She is Temporary Professor and Chief of the Division of Human Populations Biopathology and Environmental Pathology in the Department of Biopathology and Imaging Diagnostics, University of Rome Tor Vergata, Italy. For several years she has been Research Associate at the Center of Evolutionary Genetics of National Research Council and at Interdisciplinary Center of Mathematics of Lincei National Academy. She is mainly interested on the role of genetic polymorphism in the susceptibility to common diseases. Dr Gloria-Bottini is author of more than hundred papers in International Journals and Books and collaborates with research groups in U.K. and U.S.A.

Dr. Maria Banci is Medical Doctor and Specialist in Nuclear Medicine and in Cardiology. At present she is the Chief of Coronary Division of Valmontone Hospital, Rome, Italy. Dr Banci is author of about hundred papers in Italian and International Journals and has special interest in elucidating risk factors for coronary artery disease focusing on association studies between CAD and genetic polymorphism.