Persistent tetrodotoxin-resistant (TTX-R) Na+ (Nav1.9/SCN11A) currents are not normally recorded in vagal afferent neurons (VANs) with 50 mM of extracellular Na+ although the functional expression of this current was observed in the presence of PGE2 or forskolin. However, it is uncertain whether this current can be seen under physiological condition (150 mM Na+). Using the whole-cell patch-clamp technique, we showed that persistent TTX-R Na+ currents were expressed in 9 out of 38 VANs bathed in 150 mM Na+. The current density, but not the whole-cell capacitance, was significantly enhanced in the VANs expressing Nav1.9. Persistent TTX-R Na+ channels were activated at a more hyperpolarized membrane potential near -60 mV, compared with TTX-sensitive (TTX-S at -40 mV) and TTX-R Na+ channels (at -20 mV). This indicates that persistent TTX-R Na+ channels provide a wider activation window than TTX-S and TTX-R Na channels to up-regulate neuronal excitability. These results suggest that the persistent TTX-R Na+ currents may be involved in the neuronal excitability by setting a lower pressure-discharge threshold and higher discharge frequency of VANs, especially the unique subset and gender-specific distribution of myelinated Ah-type VANs, including Ah-type aortic baroreceptor neurons, identified in our previous study.

Extensive studies have demonstrated that persistent tetrodotoxin-resistant (TTX-R) sodium (Na+) channels are widely expressed in the peripheral nerve system and ascribed to the Nav1.9 sodium channel that encodes within SCN11A gene. Recent evidence suggests that the Nav1.9 subtype is implicated in inflammatory [1] and pain modulation [2] through up-regulation of the neuronal excitability in DRG neurons. Visceral afferent neurons (Vagal afferent neurons, VANs) located within nodose ganglia, such as aortic baroreceptor neurons (ABNs), not only sense the blood pressure change but also receive the sensory input related to the cardiac pain. Our previous results demonstrated that persistent TTX-R Na+ currents were not observed in VANs with extracellular solution contained 50 mM Na+ but it was up-regulated by cyclic AMP-dependent pathway [3], suggesting that persistent TTX-R Na+ currents might also impact on the regulation of neuronal excitability of visceral afferents under certain physiological or pathophysiological circumstances. Due to the technical reasons, such as loosing control of space clamp and having a difficulty to record a larger currents, 50 mM even lower Na+ concentration is usually applied in the extracellular recording solution [4,5], which is far lower than that in physiological extracellular fluid (~150 mM Na+). Based upon the voltage-dependent profiles of persistent TTX-R Na+ channel, if the neurons functionally express persistent TTX-R Na+ currents in extracellular recording solution contained 150 mM Na+, it is very likely that persistent TTX-R Na+ currents may play a crucial role in the modulation of neuronal excitability of unique subset of myelinated Ah-type VANs including baroreceptor neurons that is mainly seen in females with lower pressure-discharge threshold [6,7], which then elevates the parasympathetic drive and concomitant reduction in the activity of sympathetic pathway [8,9] through baroreflex mechanism. Furthermore, this lower tonic autonomic support of blood pressure could contribute to the lower resting blood pressure levels of premenopausal women [10,11]. Our current finding is a novel ion channel mechanism of neuronal control of circulation that can expands our understanding why the blood pressure in female is lower than that in males at similar age.

In order to achieve high resolution and high quality recordings of whole cell Na+ currents under the voltage-clamp configuration, either gender SD rats (200-300 g) were selected for this study and nodose neurons were enzymatically dispersed by incubating nodose ganglia with 10 Units/ml of Papain (Worthington Biochemical Co, Lakewood, NJ) at 37 °C for 20 min, and followed by 5 mg/ml of type II Collagenase (Worthington Biochemical Co, Lakewood, NJ) and 2.5 mg/ml of Dispase (Roche, Indianapolis, USA) at 37°C for another 30 min. The details of the procedures of cell-culture were described previously [12,13]. Experimental protocols used in this experiment have previously been approved by the Institutional Animal Care and Use Committee of School of Medical Science, Indiana University and Harbin Medical University.

All data are low pass filtered to 10 KHz and digitized at 50 KHz. Data collection and preliminary analysis are carried out using pCLAMP 10.2 and the Digidata 1440A (Axon Instruments) operating on a PC platform. In voltage clamp recordings, standard activation protocols are sufficient for electrophysiological and pharmacological classification of Na+ channel subtypes. Voltage clamp recordings generally involve standard activation protocols with calculation of cord conductance as a function of membrane voltage being a standard measure of the voltage-dependent properties of the whole cell Na+ currents.

For both TTX-S and TTX-R Na+ currents, the holding potential is -80 mV; step depolarization is from -70 to +40 mV with 5 mV increments; the sweep last 60 ms with 1 sec between sweeps.

In the present experiments, all results were expressed as mean ± SD. t-Test was applied for statistic analysis. P value less than 0.05 was considered significant. 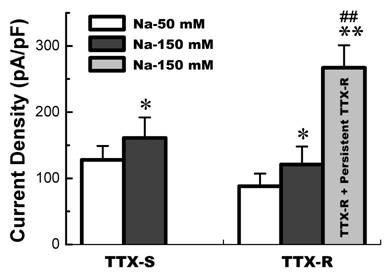 In the present study, the voltage-dependent properties of Na+ channels were also analyzed and the average data showed that the voltage-dependent properties of TTX-S and TTX-R Na+ currents recorded in 150 mM extracellular Na+, such as current-voltage relationship (I-V curve, Fig. 3A) and voltage-dependent activation (Fig. 3B), were not changed significantly compared with those in 50 mM of extracellular Na+ (data not shown), which was consistent with our previous report [3]. As indicated in I-V curve created from those VANs co-expressed persistent TTX-R Na+ channels, the currents activated at more hyperpolarized potential near -60 mV (Fig. 3). The activation between -60 to -20 mV maintained no inactivation during 60 ms recording protocol and this portion of I-V curve absolutely differed from the same portion of either TTX-S or TTX-R Na+ currents. However, the activation from -20 mV to +40 mV was similar to that of TTX-R Na+ currents (Fig. 1B and Fig. 3). This early activation of persistent TTX-R Na+ may account for the lower firing threshold setting in subset of myelinated Ah-type VANs. 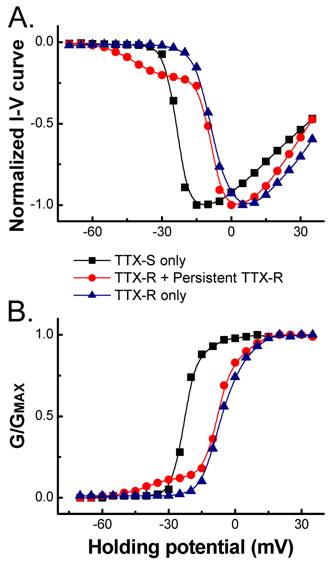 Because of the difference in activation among Na+ channels, the activation window could be significantly enlarged in those VANs co-expressed persistent Na+ channels compared with those not (Fig. 3). The larger activation window means that more Na+ channels are available at the resting stage [3], which results in the increase in neuronal excitability in VANs (Ah-type) co-expressed persistent TTX-R Na+ channel. This may be one of reasons why myelinated Ah-type VANs are always fire action potential repetitively with a significant lower firing threshold and faster depolarization [6,7].

Based upon the present experiment, we still could not figure out why the persistent Na+ channels are not functionally expressed in the extracellular recording solution contained 50 mM Na+ or less, however, our data, at least, suggest that it is very important for us to deal with isolated cell study physiologically.

These data suggest that the persistent TTX-R Na+ currents may play a key role in the enhancement of neuronal excitability by setting a lower pressure-discharge threshold and higher discharge frequency of VANs, especially the gender-specific unique subset of myelinated Ah-type VANs, including Ah-type aortic baroreceptor neurons.

This project was supported by award (HL072012) from National Institute of Health to Dr. JHS and partially supported by research grants from State Health (2007-474) and State Education (11531111) Departments of Heilongjiang to Dr. GFQ.