Purpose: The purpose of this study was to determine whether α-galactosylceramide (α-GalCer), a synthetic glycolipid agonist of natural killer T (NKT) cells, can ameliorate exercise-induced immune imbalance. Methods: Eight-week-old female Sprague-Dawley rats were trained with a progressively increasing load for 9 weeks. At 36 h and at 7 d after training, groups of rats were euthanized. The whole blood was used to detect hemoglobin(Hb), plasma was analyzed for hormones testosterone(T) and corticosterone(C), and spleen was harvested for detecting NKT cells and interferon-γ (IFN-γ) and interleukin (IL)-4 producing cells. Results: Two-way analysis of variance (ANOVA) showed significant differences between training and time in Series 1. The results showed, at 36h after training, that the decrease in Hb, T and C concentration reflected overtraining or excessive exercise. At 7 d after training, NKT cell populations decreased, and a T helper 1/T helper 2 (Th1/Th2) lymphocyte imbalance occurred. In Series 2, α-galactosylceramide (α-GalCer), an NKT cell activator was found to enhance NKT cell numbers by 69% and shift the Th1/Th2 lymphocyte imbalance by observably decreasing the frequency of IL-4 secreting cells. Conclusion: These data showed that, in addition to Th1/Th2 self-regulation, α-GalCer played an important modulatory role in the exercise-induced Th1/Th2 lymphocyte imbalance, which may be correlative with NKT immunoregulatory cells.

At present, the exercise immunology field is becoming increasingly interested in the relationship between T helper (Th) lymphocytes and immunosuppression during overtraining, excessive exercise, or fatigue[1]. Th lymphocytes represent two distinct functional subsets: Th1 and Th2 lymphocytes. Th1 lymphocytes are associated with cell-mediated immunity (CMI) and the killing of intracellular pathogens, while Th2 lymphocytes are associated with humoral immunity and antibody production. Accumulating evidence suggests that overtrained athletes exhibit an immune polarization toward the Th2 phenotype[1, 2], and it is known that Th1 and Th2 are regulated reciprocally[1]. Therefore, a shift in favor of Th2 may suppress CMI and render athlete's susceptible to viral infection. Thus, shifting this cytokine balance away from Th2 and back towards a Th1 profile might help to reconcile the exercise-induced immune imbalance.

CD1d-restricted NKT cells expressing both invariant T-cell receptors (TCRs)and NK cell receptors are an important immunoregulatory cell subset active during the immune differentiation towards Th1 or Th2[3]. We have recently found that defective NKT cell function is related to the emergence of exercise-induced immunosuppression [4, 5]. Previous studies have reported that activated natural killer T cells (NKT cells) regulate immune responses such as tumor rejection and autoimmunity by producing IFN-γ and IL-4[6, 7]. But an important unresolved issue concerning NKT cells is that they may be able to display flexibility in their cytokine response. No data are available on the potential for specific NKT cell ligands to modulate the exercise-induced imbalance between Th1 and Th2 cells. IFN-γ and IL-4 are respectively typical Th1 and Th2 related cytokines. Most of researchers now agree that these two cytokines can evaluate Th1/Th2 differentiation. Since up-regulation of Th2 lymphocytes is believed to be decisive for exercised-induced immune suppression conditions [1], we hypothesize that whether NKT activation can shift this cytokine balance away from Th2 (a typital cytokine:IL-4) and back towards a Th1 (a typital cytokine: IFN-γ) profile by the pattern of secreted cytokines.The present work was undertaken to explore this possibility in an animal model of exercise-induced immunosuppression induced by overtraining or excessive exercise. We investigated the effects of α-galactosylceramide (α-GalCer), a synthetic glycolipid activator of NKT cells [8], the Th1/Th2 lymphocyte balance during overtraining or excessive exercise.

Female Sprague-Dawley rats, body mass 228 ± 1.4 g, aged two months were supplied by the Second Military Medical University (Shanghai, China), All the animals received humane care in compliance with the university's guidelines. All rats were housed (2 per cage) in 48 cm×25 cm polypropylene cages that contained sawdust bedding. A standard 12-h light-dark cycle was used during the experiment period. Food and tap water were available ad libitum. The progressive load training performed by the training groups consisted of treadmill running on a motordriven treadmill (DSPT202, qianjiang technology company, Hangzhou, China), 6 days a week. The complete training program is shown in Table 1. The training protocol was determined by a modified program referring to our previous experiment [9].) At the same time, the control group was handled and exposed to the treadmill to control for stress of treadmill environment. The experimental protocol was approved by the Ethics Review Committee for Animal Experimentation of Shanghai University of Sports. The animals were sacrificed 36h after training to avoid the acute effect of exercise. In addition, to investigate the training-induced chronic effects on immune system, other groups were sacrificed at 7d after training. Twenty-four female Sprague-Dawley rats were randomly divided into 4 groups: 36 h quiet control group; 36 h post-training group; 7 d quiet control group; 7 d post-training group. At 36 h and 7 d after training, groups of rats were sacrificed, peripheral blood, plasma and spleens samples were prepared, and the following variables were measured: plasma testosterone and corticosterone concentration, peripheral blood hemoglobin, spleen NKT cells and cytokines (IFN-γ and IL-4).

Based on series 1 results, to assess whether α-GalCer, a synthetic glycolipid agonist of natural killer T (NKT) cells, can ameliorate exercise-induced immune imbalance, eighteen animals were divided into three groups at random: a quiet control group, post-training control group and post-training α-GalCer treated group. After the progressive load training, post-training α-GalCer treated group received α-GalCer (Alexis Biochemicals, Carlsbad, CA, USA) injection 2 times in a week (i.p. at a dose of 100 μg /kg body mass) [10, 11]. The other two groups were treated i.p. with vehicle alone (0.15% polysorbate-20 in phosphate-buffered saline (PBS) under the same time schedule. Then rats were killed at 7 d post-training. In order to minimize any diurnal variation, sampling was performed between 08:00 and l0:00 in all experiments.

The animals were anesthetized with 1% pelltobarbitalum Natricum (1ml/100g) (wegene bio-technology company, Shanghai, China). Tube A and B were heparinized. Peripheral blood was collected in these two tubes from the inferior vena cava. The whole blood(50 μl) in tube A is used to detect hemoglobin. Tube B (500 μl peripheral blood) was centrifuged at 800g for 20 min. The plasma was collected and stored at -20 oC for testosterone and corticosterone analysis. Spleens were harvested and put in RPMI 1640 medium (Invitrogen Corporation, Carlsbad, California, USA) and single spleen cell suspension was prepared by processing the spleen using a 200-mm nylon mesh. The spleen cell was directly collected in a 35 mm dish which was filled with 4 ml EZ-Sep Mouse 1X Lymphocyte Separation Medium (Dakewe Biotech Company Ltd, Shenzhen, China). Then the cell suspension in Lymphocyte Separation Medium was transferred into a 15 ml centrifuge tube. PRIM 1640 medium (1 ml) was layed on it. The tube was centrifuged at 800g for 30 min at 4 °C. Red blood cells and dead cells were deposited at the bottom. Lymphocytes at the interface were collected. Cell concentration and viability were determined using a cell counting chamber (Paul Marienfeld GmbH & Co. KG, Lauda-konigshofen, Germany).

The effect of training and time was examined by 2-way analysis of variance (ANOVA) in Series 1. When a significant effect occurred, paired t-test analyses were carried out for all indexes. Comparisons of data among each experimental group were performed using one-way ANOVA in Series 2. Data are presented as means ± standard deviation (SD). A Spearman rank data correlation analysis was performed to test for correlations. Values of p<0.05 were considered significant. 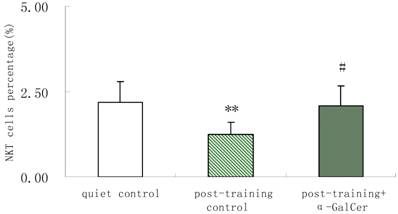 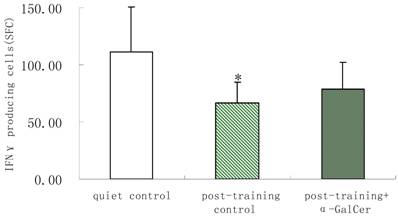 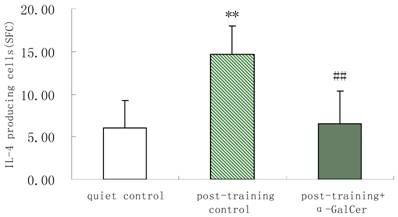 Reductions in Hb, T and C are often associated with markers of overtraining[19]. The present study showed, at 36 h post-training, trained rats had a significantly lower Hb, T and C concentration than control rats indicating an overtrained state. Our previous work and other researches have found that overtraining in rats provokes the changes of the immune parameters measured, such as the T cell and B cell proliferative activity, immunoglobulin [20, 21]. However, there was no data showing the change of Th1/Th2 lymphocyte in rats after overtraining, excessive exercise, or fatigue. Therefore, in our work, we examined the short-term and long-term effect of overtraining on Th1/Th2 lymphocytes subsets. Our result showed a cumulative effect of training, and thus displayed a more chronic form of immunosuppression. This study is the first to demonstrate that overtraining not only results in an imbalance of Th1/Th2 lymphocytes, but also lead to changes in NKT cells as we found a significant exercise-induced reduction 7 days post-training. NKT cell frequency was inversely correlated with IL-4-producting cells. However, we could not establish that the NKT cell up-regulation was directly related to the decreasing of IL-4-producting cells.

NKT cells may be able to display flexibility in their cytokine response and become polarized in either the Th1 or Th2 direction. Ligand-activated NKT cells were originally reported to favor the development of a Th2 response, because they were thought to be primarily IL-4-producing cells in the initial phase of an immune response. Consistent with this, α-GalCer was shown to protect in animal models of Th1-dominated autoimmune disease, such as type1 diabetes [22, 23] and experimental autoimmune encephalomyelitis [24, 25], by inducing Th2 polarization. However, it has become clear more recently that NKT cells are not essential for establishing a Th2 response, as evidenced by the fact that intact Th2 responses are retained in CD1d- or β2-microglobulin-deficient mice, which are devoid of NKT cells [26]. Further, some studies have demonstrated that activated NKT cells skew immune responses in the opposite direction--toward the Th1 type [27-30]. Recently, it has been reported that α-GalCer prevents allergic airway inflammation, possibly through increased IFN-γ production, together with the reduced Th2 cytokine expression by ligand-activated NKT cells [31]. These data suggest that ligand-activated NKT cells may also contribute to Th1-mediated responses. Collectively these data reveal that NKT cell regulation of Th1/Th2 is a complex issue.

Until now, there have been no studies investigating the relativity between NKT cells and Th1/Th2 lymphocyte imbalance after overtraining, excessive exercise, or fatigue. In the present study, a synthetic glycolipid agonist of NKT cells, α-GalCer, was used to demonstrate that NKT cell suppression brought on by overtraining can be relieved, and that the overtraining-induced Th1/Th2 lymphocyte imbalance can be ameliorated. α-GalCer was shown to improve NKT cell frequencies by about 69% and overtraining-induced Th1/Th2 lymphocyte imbalance was prevented by observably decreasing the frequency of IL-4 secreting cells. Our data showed that α-GalCer inhibited the exercise-induced increase in Th2 immune responses. Although it is now clear that α-GalCer is a potent stimulator of cytokine production by NKT cells, α-GalCer maybe also activates NK cells, conventional T cells, and B cells. Therefore, CD1d or NKT cells knockout rat should be established if we want to get the conclusion that the NKT cell upregulation is directly related to the changes of the cytokine profile. Our results only suggested that α-GalCer' effect on the exercise-induced Th1/Th2 lymphocyte imbalance may be correlative with NKT immunoregulatory cells. Further studies are needed to verify this postulate. This is the first report to demonstrate a potential role for α-GalCer in the treatment of exercise-induced immune imbalance, which might represent a strategy for the treatment this exercise-induced disorder.

In conclusion, α-GalCer played an important modulatory role in the exercise-induced Th1/Th2 lymphocyte imbalance, which may be correlative with NKT immunoregulatory cells. Since athletes with immune imbalance have reduced numbers of NKT cells, therapies aimed at the in vivo activation of NKT cells maybe help maintain normal immune function in athletes. Additionally, our finding that NKT cells are capable of expansion after repeated in vivo activation may have implications for designing NKT cell-based therapies for other chronic immunological diseases.

This work was supported by grants from the National Natural Science Foundation of China (No. 30671012) and the Shanghai Leading Academic Discipline Project (No. S30802).