Letter To The Editor

The small GTPase Rab5 controls the fusogenic properties of early endosomes through activation of effector proteins. Expression of a GTPase-defective mutant, Rab5(Q79L), is known to cause formation of enlarged early endosomes. To identify proteins interacting with this GTP-bound form of active Rab5 [1], we used a two-hybrid system to screen a human fetal cDNA library with a human Rab5A protein bearing a mutation of Q79L as bait. The positive clone cDNAs were reconfirmed to be interaction-positive by using an independent yeast clone containing the bait. Then, more than 3 positive preys were identified, and subsequent sequence analysis revealed one of the preys to be RUFY3: RUN and FYVE domain containing 3. We performed double immunefluorescent staining for human RUFY3 and human Rab5A(Q79L) in 3Y1 cells. Analysis with confocal microscopy clearly showed that the Rab5(Q79L) and the RUFY3 colocalized in large vesicle structures in 3Y1 cells (data not shown). This indicated an interaction between RUFY3 and Rab5(Q79L), which may be altered by the nucleotide-bound state of Rab5. We checked this possibility using other Rab5 mutant. The Rab5(S34N) mutant preferentially binds GDP, whereas the Rab5(Q79L) mutant is unable to hydrolyze bound GTP. As shown in Figure 1, the superimposed image by confocal microscopy again confirmed the cytoplasmic vesicular localization of RUFY3 with constitutively active Rab5(Q79L) well colocalized in almost all vesicles, whereas not with dominant negative Rab5(S34N). These data clearly indicated that RUFY3 was localized in enlarged vesicles with the active GTP-bound form of Rab5, where Rab5(Q79L) sequester RUFY3. However, there is an another possibility for the phenomenon seen in Figure 1, that Rab5(Q79L) mutant inhibited endosome traffic and resulted in RUFY3 accumulation in Rab5(Q79L) compartment.

We next determined whether Rab5 was associated with RUFY3 by glutathione S-transferase (GST) pull-down assays. We found that carboxyl terminal domain of RUFY3 was associated with Rab5 in v-SRC transformed SRD cells (Fig. 2A), but not in normal 3Y1 cells and 293T cells (data not shown). The RUN domain of RUFY3 as well as control GST protein was not able to bind Rab5 (Fig. 2A, upper panel). In this assay, we found that Rap2 was weakly bound to the RUN domain of RUFY3 (Figure 2A, middle panel), which was consistent with the previous reports [2]. All the other small GTPases including Ran (Figure 2A, lower panel) [3], Rab2, Rab7, Rho, Ras did not bind to RUFY3 (data not shown). These data suggested that RUFY3 could bind to Rab5 and Rap2. As a complementary approach, we also used a pull-down assay with immobilized GST-Rab5 fusion proteins [4] preloaded with GTP (GST-Rab5(Q79L)) but not with GDP (GST-Rab5(S34N)) could bind to RUFY3 (Figure 2B). Finally, we examined the biochemical in vivo endogenous interactions between Rab5 and RUFY3 (Figure 2C). U937 (monocyte-derived resident macrophage) cells were subjected to immunoprecipitation using either anti-Rab5 or anti-RUFY3 antibodies. As shown in Figure 2C, Rab5, but not control, was coprecipitated with RUFY3. Reciprocally, RUFY3 was coprecipitated with Rab5, but not with the mock antibody.

The two-hybrid assay also revealed that the carboxyl terminal region of RUFY3 was necessary for this interaction, since a truncated protein consisting of the first 390 residues of RUFY3 did not interact with Rab5(Q79L) (data not shown). The carboxyl terminal region of the RUFY3 is predicted to be mainly alpha-helical and contains coiled-coil domains, as determined according to the Lupas algorithm. The RUFY gene family (RUFY1, RUFY2), which is most similar structure to RUFY3, contains an amino terminal RUN domain and a carboxyl terminal FYVE domain [5] with two coiled-coil domains in-between [6]. The RUFY proteins are localized predominantly to endosomes as evidenced by their colocalization with early endosome antigen marker (EEA1) [6]. However, both RUFY1 and RUFY2 have not been shown to associate with active Rab5. The endosomal localization of EEA1 was also determined by its ability to bind Rab5 [7]. To our knowledge, the region has not been identified as a general binding motif for active Rab5.

The GTP-bound active form of Rab5 localized on the cytoplasmic face of early endosomes, and promotes membrane trafficking through interaction with specific effector molecules such as EEA1 [8].The mode of action of Rab5 in phagosomal maturation remain obscure. However, it has been reported that oxidized low density lipoprotein interferes with normal phagosomal maturation, possibly via blocking membrane fusion events such as proper activation of the Rab5 [9].

Colocalization of RUFY3 and active Rab5(Q79L). The 3Y1 cells were transiently transfected with either GFP-tagged-Rab5(S34N) and pcDNA3.1-RUFY3 (left panels), or GFP-tagged-Rab5(Q79L) and pcDNA3.1-RUFY3 (right panels). The cells were then fixed and incubated with anti- RUFY3 antibodies followed by staining with rhodamine-conjugated secondary antibodies. Images were obtained using a confocal microscope. The merged figures show images of green (GFP-labeled proteins) and red rhodamine labeling obtained for the same section, with yellow color resulting from the overlay of green and red. Polyclonal anti-RUFY3 antibody was prepared in rabbits immunized with the NH2-terminal region of human RUFY3 as GST fusion proteins. Antibodies (Rab5:sc46692; Rab5A:sc309) were purchased from Santa Cruz Biotechnology. Secondary antibodies linked to Fluorescein or Rhodamine were from BIO SOURCE. Bars, 10 micrometer. 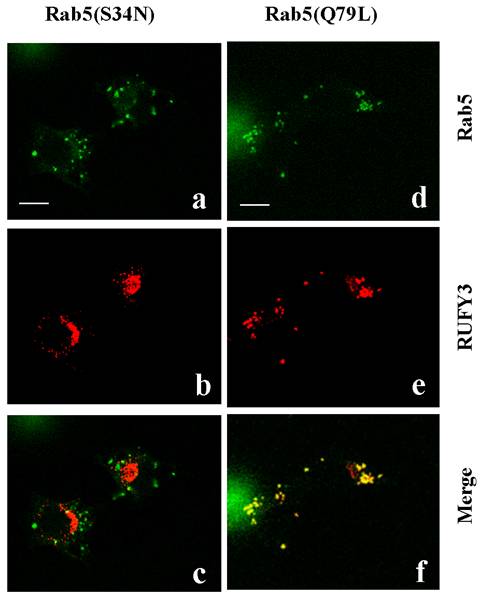 (A) Interaction between the full-length RUFY3 and various small GTPase proteins were analyzed in the GST pull down assay with GST only, GST fusion of RUFY3 C terminal region (370-469) or of RUFY3 RUN domain (93-232). These GST fusion proteins were immobilized on glutathione-agarose beads and mixed with SRD cell lysates. Bound proteins were separated by SDS-PAGE and immunoblotted with the GTPase protein antibodies indicated in the figure. (B) GST-Rab5 proteins in various nucleotide-bound state mutants were allowed to bind RUFY3. RUFY3 was expressed in 293T cells and subjected to GST pull-down assay with GST-Rab5 fusion protein conjugated resin. Bound proteins were separated by SDS-PAGE and immunoblotted with anti-RUFY3 antibody. (C) Coimmunoprecipitaion of Rab5 with RUFY3. U937 cell lysates containing co-expressed RUFY3 were immunoprecipitated by anti-Rab5 (upper panel) or anti-RUFY3 (lower panel) antibodies, followed by SDS-PAGE and immunoblot analysis with anti-RUFY3 or anti-Rab5 antibodies, respectively.

This work was supported by grants-in-aid from the Ministry of Education, Culture, Sports, Science and Technology in Japan, and by Nara Women's University Intramural Grant for Project Research.

The authors declared that no conflict of interest exists.

4. Chamberlain MD, Anderson DH. Measurement of the interaction of the p85alpha subunit of phosphatidylinositol 3-kinase with Rab5. Methods Enzymol. 2005;403:541-552