In this study we successfully constructed a full-length cDNA library from Siberian tiger, Panthera tigris altaica, the most well-known wild Animal. Total RNA was extracted from cultured Siberian tiger fibroblasts in vitro. The titers of primary and amplified libraries were 1.30×106 pfu/ml and 1.62×109 pfu/ml respectively. The proportion of recombinants from unamplified library was 90.5% and average length of exogenous inserts was 1.13 kb. A total of 282 individual ESTs with sizes ranging from 328 to 1,142bps were then analyzed the BLASTX score revealed that 53.9% of the sequences were classified as strong match, 38.6% as nominal and 7.4% as weak match. 28.0% of them were found to be related to enzyme/catalytic protein, 20.9% ESTs to metabolism, 13.1% ESTs to transport, 12.1% ESTs to signal transducer/cell communication, 9.9% ESTs to structure protein, 3.9% ESTs to immunity protein/defense metabolism, 3.2% ESTs to cell cycle, and 8.9 ESTs classified as novel genes. These results demonstrated that the reliability and representativeness of the cDNA library attained to the requirements of a standard cDNA library. This library provided a useful platform for the functional genomic research of Siberian tigers.

To preserve the wealth of biodiversity in China, there is a very urgent need to commence rigorous conservation of endangered species. However, only about 13 functional genes of P. t. altaica were cloned and partially studied according to the latest data of NCBI and information with reference to cDNA library of P. t. altaica is scarce. To identify more genes of Siberian tiger, including the characterization of specific expressed, new or unknown functional genes and further study their functions, construction of full-length cDNA library is an efficient method [4,5].

Cells were harvested and total RNA was extracted with Trizol reagent (Invitrogen, USA) when they were in the period of passage 3. First and double-strand cDNAs were synthesized according to the protocol of the SMART cDNA Library Construction kit (Clontech, USA). Subsequently approximately 2μl of first strand cDNA sample was amplified using long distance PCR (LD-PCR). The first four peak fractions containing cDNA (>500bp) were pooled together using column chromatograph with CHROMA SPIN-400 medium. The cDNA was ligated to λTriplEx2 vector (1:1.5) and the ligation was packaged with Gigapack Ⅲ Gold Packaging extract.

Titration of the primary library

The number of clones was counted to calculate the library titer according to the formula: pfu/ml = number of plaques × dilution factor × 103μl/ml (μl of diluted phage plated). The recombination efficiency was identified by blue/white screening in E.coli XL1-Blue. Colony PCR was used to confirm the size of inserted fragments in the library. After amplification, the completed cDNA libraries were stored in 7% dimethyl sulfoxide at -80°C.

cDNA clones were selected randomly from the cDNA library and single-pass sequenced at the 5′ end on an ABI 3730 Genetic Analyzer (Applied Biosystems). A large-scale EST sequencing project for Siberian tiger was initiated to identify and functionally annotate as many unique transcripts as possible. The processed cDNA sequences were used to perform the BLAST search at the GenBank database to compare all available ESTs and genes to date (http://www.ncbi.nlm.nih.gov/blast). BLASTX results with bit scores greater than 80 and E-values of less than 10-10 were generally regarded as significant match [7,8]. Multiple sequence alignment between the amino acid sequences of candidate clones and their homologues of the other species were also analyzed by using CLUSTAL W [9].

We used a primary explanting technique and cell cryogenic preservation technology to establish the Siberian tiger fibroblast cell line and proceeded to biological and genetic detection. The culture conditions seemed optimal, and the cells looked healthy (Figure 1A-D). Because we wanted to construct a cDNA library, the fibroblasts must maintain diploid character similar to the cells in vivo. Chromosome analysis showed that the frequency of cell chromosome number of 2n=38 was 90.2-91.6% in passage 1 to 3, which indicated culture in vitro effect the heritage of cells slightly, supporting that the cell line was a steady diploid one (Figure 1 F). Test results for bacteria, virus and mycoplasma were all negative (Figure 1 E).

The ratio of OD260/OD280 to the total RNA was approximately 2.02 and the concentration was 1.231μg/μl. As shown in Figure 2A, two bright bands of 18S rRNA and 28S rRNA can be seen clearly, indicating that the total RNA is integrated and stable enough for cDNA library construction. Two microgram of total RNA was subjected to reverse transcription for synthesis of the first and double-stranded cDNAs for LD-PCR. As shown in Figure 2B, the ds-DNA appeared as a smear of bands of 0.5 - 4 kb on the gel. 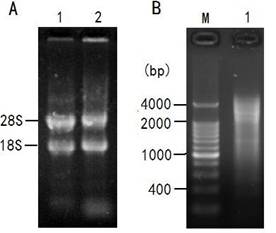 The cDNA size fractionation was carried out using CHROMA SPIN-400 column (Figure 3A). The titers of primary and amplified libraries were 1.30×106 pfu/ml and 1.62×109 pfu/ml respectively. The recombination efficiency of the amplified libraries was 90.5%. The insert ratio and the average length of inserted fragments were measured by PCR, as shown in Figure 3B. The average size was approximately 1.13 kb in average, 1-2 kb in 62.3% and 0.5-1.0 kb in 37.7%, suggesting that the insertion fragments harbored most of the mRNAs and reached the requirement for further studies on gene structure, translation, and expression.

EST sequencing for selected independent clones from the cDNA library has been proved to be a quick and efficient approach to assess library quality. The primary cDNA library, instead of the amplified library, was used for generation of ESTs to reduce the redundancy of cDNA clones as only a small number of ESTs were targeted through random selection. Four hundred and fifty-six white clones were picked randomly for EST sequencing. After removal of the vector sequences and low-quality sequences, 416 effective sequences from the total cDNA sequences were obtained, a total of 282 individual ESTs were analyzed and they ranged from 328 to 1,142 nucleotides in length.

The classification of ESTs from P. t. altaica cDNA library based on their putative functions 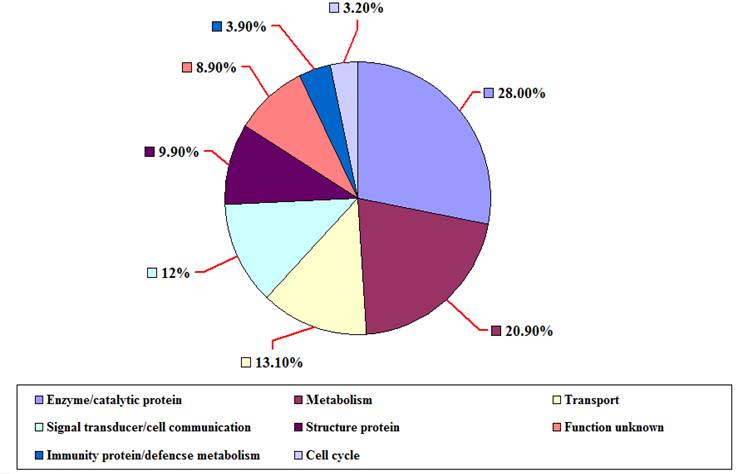 The distribution of ESTs from P. t. altaica cDNA library based on BLASTX score revealed that 152 (53.9%) of them were classified as strong, the highest match with a BLASTX score greater than 200, meanwhile 109 (38.6%) ESTs were nominal with BLASTX score for the highest match between 80 and 200, and 21 (7.4%) ESTs were weak with BLASTX score for the highest match less than 80 or no significant similarity to sequences in the database. Among the ESTs with known putative function, 79 (28.0%) ESTs were found to be related to enzyme/catalytic protein, 59 (20.9%) ESTs to metabolism, 37 (13.1%) ESTs to transport, 34 (12.1%) ESTs to signal transducer/cell communication, 28 (9.9%) ESTs to structure protein, and 11 (3.9%) ESTs to immunity protein/defencse metabolism, 9 (3.2%) ESTs to cell cycle, 25(8.9) ESTs were ''unknown protein'' with no significant matches or unknown proteins (Figure 4). 24 of 282 ESTs were found to have more than three copies and the rest ESTs have one to two copies in Siberian tiger cDNA library.

Over the past years, cDNA library construction and analysis is considered to be an indispensable tool for functional genomic analysis as it provides much more detailed information on the genomic mechanisms underlying diverse processes of the organism [11]. The major characteristic of cDNA construction by SMART technique could improve the ratio of full-length cDNA sequences. Although the optimal number of cycles for minimizing PCR-induced mutations has not been rigorously tested for SMART library construction, performing three cycles using a suitable polymerase mixture should be sufficient to limit the number of errors to a tolerable level [12]. Conventionally generated cDNA libraries contain a high percentage of 5′- truncated clones. An important characteristic of SMART technique is that it provides a method for producing high-quality and full-length cDNA libraries that preserve the complete 5′ terminal sequence of mRNA [13].

There are three chief aspects that identify the quality of a cDNA library. According to Clareke-Carbon's formula, a cDNA library should contain at least 1.7×105 independent clones to ensure that the 99% low abundance mRNA would be present in the library [14]. The high recombination efficiency is another index of good quality library [15]. The third aspect is that the average length of inserted cDNA should be no less than 1.0 kb to ensure the integrity of cDNA. In this paper, the full-length cDNA library constructed from Siberian tiger conformed to the requirements of a standard library [4].

The cells may be injured and changed in biological characteristics, especially hereditary characteristics, after too many passages and trypsin digestion. Improving culture procedure and decreased the passages to maintain fibroblast sample character similar with the cells in vivo, we construct the cDNA library to conserve genomic characteristics of Siberian tiger. The cDNA library constructed in this study will be affluent in the EST library, full-length analysis, the next work of expression identification, location and function in the chromosome will make great promotion for interesting genes associated with its excellent characters of Siberian tiger.

Generation and analysis of ESTs

cDNA libraries are widely used to identify genes and splice variants, and as a physical resource for full-length clones [16]. The SMART library provided a useful resource for the functional genomic research of Siberian tiger and will present some new molecular material for this species as well. The regions encoding proteins of full-length cDNA are usually conserved, and may have some similarities with closely related regions, which can help us to identify and analyze the protein encoding genes. Consequently, analysis of the expression of a large number of genes combined with the knowledge of their functions can facilitate the understanding and allows us to take a glimpse of the overall picture of biological processes in P. t. altaica fibroblast cells. In this study, approximately 91.1% of the ESTs generated were sequences with known or putative functions, while the remainder was unknown proteins or sequences with no similarities to the databases. These unknown and unclassified ESTs can become candidates for discovering new interesting genes through functional analysis currently being initiated in our laboratory.