Interleukin-17 (IL-17) is a CD4 T cell-derived proinflammatory cytokine. Many studies have revealed that IL-17 plays an active role in the development of inflammation, GVHD and autoimmune diseases [3-5]. The relationship between cancer and IL-17 has been investigated. An increase in the number of IL-17-postive cells in tumors was detected in prostate cancer, ovarian cancer, and hepatocellular cancer [6-9]. Furthermore, some researchers have shown that the number of IL-17-postive cells correlates with tumor development and patient prognosis. Although IL-17 mRNA has been detected in tumors in patients with gastric cancer [10], the distribution of IL-17-postive cells within the tumor and the relationship between IL-17 and prognosis have not yet been investigated. In this report, we examined the intratumoral expression of IL-17 and CD8 by immunohistochemistry, and correlated it with the clinical data of gastric adenocarcinoma patients. We evaluated the prognostic effects of intratumoral IL-17low or high expression and CD8+ TILs (tumor-infiltrating lymphocytes) by Cox regression and Kaplan-Meier analysis.

Paraffin-embedded samples were obtained from 192 gastric adenocarcinoma patients who underwent surgical operations at the Sun Yat-sen University Cancer Center, Guangzhou, China, between 2002 and 2005. Patients with autoimmune diseases were excluded. None of the patients had received anticancer treatment prior to surgery. There were 129 male and 63 female patients with a median age of 58 years (range, 17-85 years). The follow-up dates of the patients in this study are available and complete. The median follow-up for the entire cohort was 61 months (range 0.3-81.6 months). There were 79 cases of stage I-II and 113 cases of stage III-IV cancer according to the TNM classification for gastric cancer pTNM staging system (International Union Against Cancer, UICC). Each lesion was graded histologically according to the WHO classification criteria. Overall survival (OS) was defined as the interval between the date of surgery and date of death or the last known follow-up. All samples were coded anonymously in accordance with local ethical guidelines (as stipulated by the Declaration of Helsinki).Written informed consent was obtained, and the protocol was approved by the Review Board of the Sun Yat-sen University Cancer Center.

Formalin-fixed, paraffin-embedded samples were cut to a thickness of 5 μm. Each tissue section was deparaffinized and rehydrated with graded ethanol. For antigen retrieval, the slides were boiled in EDTA (1 mM; pH 8.0) for 15 min in a microwave oven. Endogenous peroxidase activity was blocked with a 0.3% hydrogen peroxide solution for 10 min at room temperature. After rinsing with PBS, slides were incubated overnight at 4°C with respective primary antibodies which include goat anti-human IL-17 polyclonal antibody (R&D systems; dilution 1/300) and mouse anti-human CD8 monoclonal antibody (Zhongshan Golden Bridge Biotech, Beijing, China; dilution 1/100). After three washes in PBS, sections were incubated with biotinylated anti-goat or anti-mouse secondary antibody (Zhongshan Golden Bridge Biotech, Beijing, China) respectively for 30 min at room temperature. Immunostaining was performed using the Envision System with diaminobenzidine (DakoCytomation, Glostrup, Denmark). Finally, the signal was developed with 3,3'-diaminobenzidine tetrahydrochloride (DAB), and all of the slides were counterstained with hematoxylin. Data were obtained by manually counting positively stained cells in five separate areas of intratumoral regions under 400× high-power magnification. Densities were determined by computing the mean number of positively stained cells per high power microscopic field (HPF). Mouse IgG1 (DAKO) and normal goat IgG (Santa) were used as negative control stains .

Descriptive statistics were expressed as the mean ± SD or median (range). The median value of immunohistochemically detected variables of IL-17 and CD8 was used as cut-off for defining the TIL subgroups in our results as previously described [11]. Chi-squared tests or Fisher exact tests were used to assess the relationship between IL-17 and CD8 and clinic pathological features. Correlations between IL-17 and CD8 were determined by the Pearson correlation coefficient. Prognostic factors were examined by bivariable and multivariable analyses using Kaplan-Meier methodology and Cox proportional hazards model. A two-sided p value < 0.05 was considered statistically significant. All statistical analyses were performed with SPSS software (version 16.0; SPSS Inc., Chicago, IL, USA).

The patients' characteristics are presented in Table 1. Of the 192 patients examined, 82(42.8%) were dead before the end of the observation period. The median age of the study population was 58 years (range17-85 years). The majority of patients (146) presented with serous histology (76.1%). The median follow-up for the entire cohort was 61 months (range 0.3-81.6 months). The 5-year survival for the entire study population was 57.2%.

Relationship between CD8+ TIL, intratumoral IL-17 expression and clinic pathological features of patients with gastric adenocarcinoma

The prognostic value of IL-17 expression and CD8+ TILs on gastric adenocarcinoma patient survival was evaluated between patients with high and low IL-17 expression and CD8+ TIL numbers. Using a Kaplan-Meier curve assessment, we found that low IL-17 expression in tumor tissue was an independent predictor of poor prognosis in gastric adenocarcinoma patients. The five-year overall survival probability among patients expressing higher levels of IL-17 was significantly better than those expressing lower levels of IL-17 (p=0.036) (Figure 2). There was no significant correlation between the number of CD8+ TILs and patient survival (p=0.366) (Figure 3).

To identify the variables of potential prognostic significance in all patients with gastric adenocarcinoma, univariate and multivariate analyses were carried out using the Cox proportional hazard model to compare the impact of the expression levels of IL-17 and CD8+ TILs and other clinical pathological parameters on the prognosis of 192 gastric adenocarcinoma patients. Univariate analysis showed that IL-17 expression, tumor size, and recurrence were significant prognostic factors (Table 4). Multivariate analysis determined that IL-17 expression was an independent predictor of survival (p=0.005), as was recurrence (p=0.000). The relative risk in patients with low levels of IL-17 was 0.521 times greater than that of patients with higher expression of IL-17 (Table 4).

Correlation analysis between intratumoral expression of IL-17 and CD8+ TILs

Through correlation analysis, we found no significant correlation between intratumoral expression of IL-17 and CD8+ TILs (Figure 4).

Univariate analyses of variables associated with survival and recurrence

Intratumoral expression of IL-17 and CD8+ TIL detection. Consecutive sections were used for immunohistochemical analysis of CD8+ TIL (A, B) and IL-17 expression (C, D) (A, C 200× magnification; B, D 400×magnification). 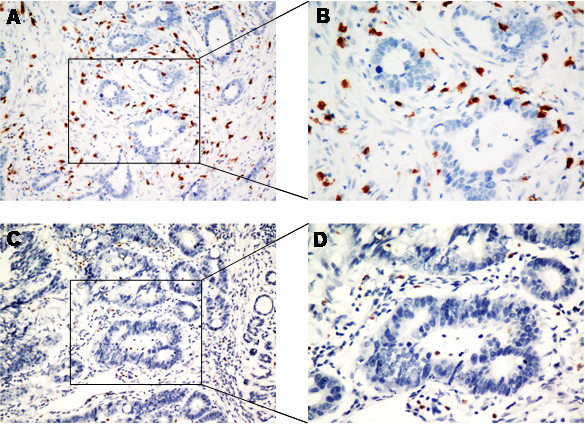 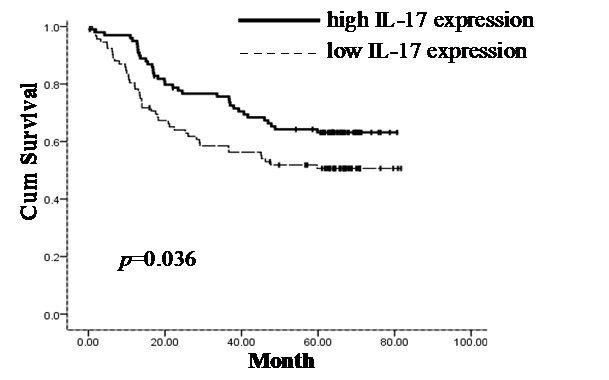 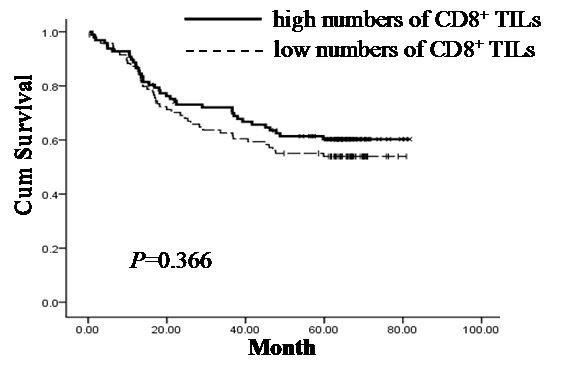 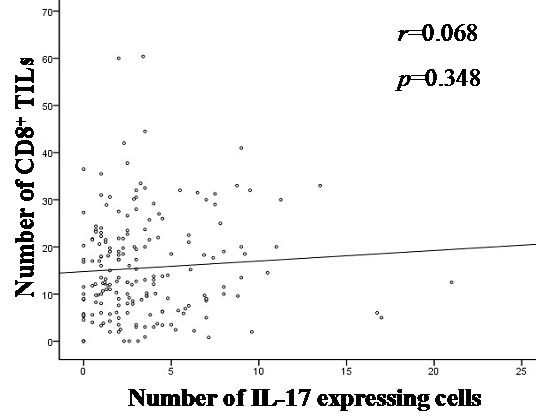 Gastric cancer is one of the most common cancers in Asia, including China. Despite the reduction in mortality rates due to both earlier detection and improved therapies, gastric cancer still poses a major threat to human health. It would therefore be valuable to identify a molecular target that could provide prognostic information.

IL-17 is a novel CD4 T cell-derived pro-inflammation factor that plays a potential role in inflammation, GVHD and autoimmune diseases [12-14]. Recent study has shown that this effector T cell subset is also involved in tumor immunology. An increase in IL-17-positive cells has been observed in prostate cancer and hepatocellular cancers, and there are correlations between IL-17 and patient survival in ovarian cancer and small cell lung cancer [15-17]. In this report, we examined the expression of IL-17 within gastric adenocarcinoma tumors and the relationship between IL-17-postive cells and gastric adenocarcinoma patient prognosis. This is the first report on the potential for IL-17 to serve as a prognostic indicator in gastric cancer. We used immunohistochemistry to characterize the intratumoral IL-17-postive cells and CD8+ cytotoxic T lymphocytes in gastric adenocarcinoma patients after resection and analyzed the association between prognosis and the detection of IL-17-postive cells and CD8+ TILs.

For the present study, we collected 192 gastric adenocarcinoma samples; 90.6% (174/192) expressed IL-17, which was distributed throughout the cytoplasm. In the CD8+ positive cells, CD8 was extensively expressed on the membrane. We further analyzed the relationship between intratumoral IL-17 expression, CD8+ TILs and the clinic pathologic features in patients with gastric adenocarcinoma. IL-17 expression was significantly correlated with age (p=0.004); the expression of IL-17 is significantly higher in younger patients. There was no significant association between the expression of IL-17 and other clinic pathologic features. Of note, we found no statistically significant correlation between the expression of IL-17 and UICC staging (p=0.883) or histologic grade (p=0.510), even though some other studies have shown that an increase in Th17 cells was associated with clinical stage in blood [10] and in tumor tissue [18].

Kaplan-Meier survival analysis showed that the five-year overall survival probability among patients with higher levels of IL-17 was significantly better than those with lower levels of IL-17 expression (p=0.036). This is consistent with a recent report on human ovarian cancer [8]. However, in HCC patients, Zhang [19] et al. observed that increased intratumoral IL-17-postive cells correlate with poor survival. The different types of tumors and immunological statuses may contribute to different results. While there was no significant correlation between the level of CD8+ TILs and patient survival (p=0.366), CD8+ T lymphocytes are thought to be at the forefront fighting against tumors, and the number of CD8+ TILs was significantly correlated with UICC staging (p=0.012) in this study. However, they have no prognostic value in many cancer types. Our results are consistent with several previous reports [20-21].

Through correlation analysis, we found no significant correlation between the expression of IL-17 and CD8+ TILs (p=0.348, Figure 4). Studies regarding the mechanisms by which IL-17 mediates tumor immunity have shown that IL-17 can recruit Th1-related chemokines, such as CXCL9 and CXCL10, which promote the migration of effector T cells to the tumor site. Levels of CXCL9 and CXCL10 directly correlate with the number of tumor-infiltrating CD8+ T cells. IL-17 plays an indirect role in antitumor immunity by promoting effector CD8+ T cells [8]. Since our study did not show significant correlation between CD8 T cells and IL-17, the results of our report may suggest that intratumoral expression of IL-17 may involve other mechanisms and anti-tumor effector cells alternative to the presence of CD8 T cells. While He D et al [22] observed that IL-17R deficiency caused an increase in CD8 T cell infiltration in an IL-17R-deficient mice model, the infiltration of myeloid-derived suppressor cells (MDSCs) are reduced in tumors. These controversial data about IL-17 in tumor development have reflected the complication in tumor microenvironment. Many factors, including the types of tumor and the microenvironment of the tumor itself , may lead to different endpoints.

In summary, our results show that IL-17 and CD8+ TILs are generally present in gastric adenocarcinoma. We also found that IL-17 expression is correlated with age (p=0.004) and that CD8+ TILs are correlated with UICC staging (p=0.012) and depth of tumor invasion (p=0.022). Multivariate Cox proportional hazard analyses revealed that IL-17 and recurrence are independent factors affecting the five-year overall survival probability. Our study suggests that the expression levels of IL-17 in the tumor can be an independent prognostic indicator in gastric adenocarcinoma patients. The molecular mechanisms for this correlation, which may help us better understand the role of IL-17 in the development of gastric adenocarcinoma, remain to be elucidated.

This work was supported by POTEN BIOMEDICAL TECHNOLOGY DEVELOPMENT CO., LTD, China, and supported in part by the Gillson Longenbaugh Foundation, USA.

The authors declare that they do not have any conflict of interest with respect to this manuscript.