Invasive lobular cancer (ILC) tends to be significantly larger in size with significantly more positive lymph nodes, whereas ILC has a significantly more favorable outcome, compared to stage-matched invasive ductal carcinoma (IDC). The mechanism accounting for such differences remains elusive. Based on morphological, immunohistochemical, and molecular studies of over 1,000 cases of human breast cancers, we hypothesize that the differences may result from the structural and/or functional differences of their surrounding myoepithelial cell layers, which dictate lobular and ductal tumor cells to follow different pathways of invasion or metastasis. The background, rationale, supportive data, and implications of our hypothesis are presented and discussed.

It has been well documented and generally accepted that ILC tend to be significantly larger in size with a significantly higher rate of positive lymph nodes than its stage-matched ductal counterpart [1-3]. Although large tumor size and positive lymph node are two well-recognized risk factors for worse prognosis, patients with ILC have a substantially more favorable clinical outcome compared to patients with IDC [1-5]. These contradictory impacts have been largely attributed to the unique biological features of ILC, including the lack of E-cadherin expression, higher expression of ER and PR, lower expression of HER-2, p53, and EGFR, and lower S-phase fraction [6-9]. The trigger factor for the significant differences in biological behavior and clinical outcomes between ILC and IDC, however, have not been identified

Based on our previous morphological, immunohistochemical, and molecular studies of over 1,000 cases of human breast cancers, we speculate that the substantial difference in clinical outcomes between ILC and IDC may results from the structural and functional differences of their surrounding myoepithelial cell layers, which control the genetic property and biological behavior of the pre-invasive lesions and dictate lobular and ductal tumors to follow different pathways for invasion and/or metastasis. Our speculation is consistent with a number of experimental findings and clinical reports.

1. Structural differences in the myoepithelial cell layer between the lobular and ductal systems

2. Functional differences in the myoepithelial cell layer between the lobular and ductal systems

3. Correlation between the status of myoepithelail cell layers and biological presentations of tumor cells

The status of the myoepithelial cell layer appears to correlate with the biological presentation of associated epithelial cells. A number of cell surface adhesion molecules, including E-cadherin, are strongly expressed in nearly all ductal cells and their malignant derivatives, but are absent in their lobular counterparts [31,32] (Fig 4).

In the lobular system, elevated cell proliferation or malignancy-associated changes are often simultaneously present at the entire lobular structures of morphologically normal appearing lobules, in which all tumor cells share a similar morphological and immunohistochemical profile with adjacent invasive lesions [23,24] (Fig 5a-5d). In contrast, elevated cell proliferation and malignancy-associated changes are only seen at or near focally disrupted myoepithelial cell layers (defined as a gap larger than the combined size of at least 3-myepithelial cells in at least 3 consecutive sections), in which the “budding” tumor cells are morphologically and immunohisto-chemically distinct from their adjacent counterparts within the tumor core [ 25-30] (Fig 5e-5h).

Comparison of the growth pattern and molecular profiles in potential precursors of invasive lesions. Human breast tissue sections were double immunostained for different markers. Circles identify potential precursors of invasive lesions (asterisks). Note that malignancy-associated changes are seen at multiple or the entire lobular elements, while are only present at or near focally disrupted myoepithelial cell layers with different profiles in the ductal system. 200X. 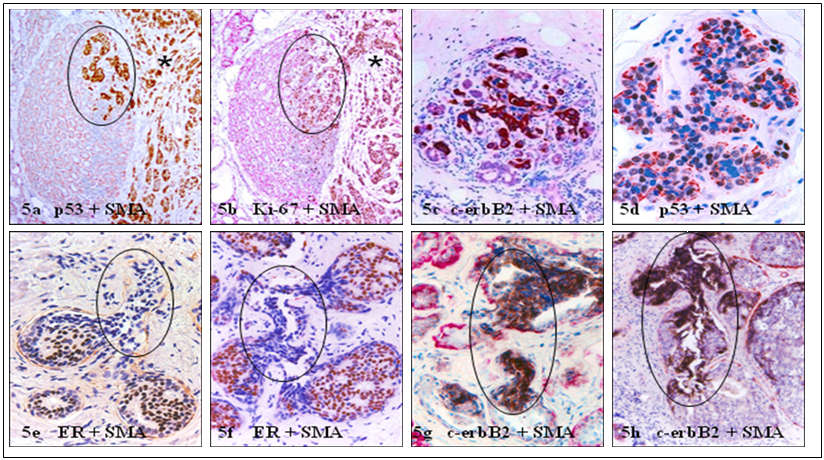 Based on the above findings and the following facts: [1] the epithelial component of the human breast consists of acinar cells that are mainly for the milk production, and duct cells, which are mainly for providing the drainage for the secretions, [2] lobular buds derive from terminal ducts during breast morphogenesis, and [3] normal, hyperplastic, and in situ neoplastic lobular cells can be distinguished from ductal cells by morphology and expression of E-cadherin, we propose that the structural and functional difference in their surrounding myoepithelial cell layers may represent a trigger factor accounting for the substantial difference in clinical outcomes between ILC and IDC. We define lobular cells as acinar or secretory cells that are mainly for the milk production. Consequently, we refer lobular carcinoma as cancers consisting of malignant acinar or secretory cells.

Alterations in the myoepithelial cell layer may directly impact the clinical outcomes of ILC and IDC by controlling the genetic property and biological behavior of the precursors of invasive lesions, and by dictating the lobular and ductal tumors to follow different pathways for invasion and/or metastasis. More specifically, the less consistent expression of tumor suppressors in the myoepithelial cell layer of the lobular system would permit extensive proliferation, differentiation, molecular and biochemical changes at the productive age, especially during pregnancy, which could exhaust or “use up” the residual stem cells. Consistent with this speculation is the fact that a number of case-control studies have consistently shown that long-standing lactation and reproductive parameters could significantly reduce breast cancer risk [39-40].

In addition, as aberrant expression of tumor suppressors with malignancy-associated changes are exclusively seen in some acinar clusters or lobules [23,24], degradation of the myoepithelial cell layers could potentially lead to in situ malignant transformation of the entire tumor cell population within a given lobule to invasive lesions. Therefore, lobular lesions may be at greater risk to develop invasion and metastasis to lymph node. This speculation is consistent with a case control study of 37,692 ductal carcinoma in situ (DCIS) and 4,490 lobular carcinoma in situ (LCIS), which showed that patients with LCIS were 5.3-fold more likely than patients with DCIS to develop invasive lobular lesions [41]. Due to the above reasons, invasive and metastatic lobular lesions may have lower potential to initiate new tumor nests in new sites. Consistent with this speculation is the fact that only the tumor cells expressing stem cell markers could significantly contribute to carcinogenesis and tumor progression, or to significant tumor growth in animal models [42-43].

In sharp contrast, as the epithelial component is normally devoid of blood vessels and lymphatic ducts and totally depends on the stroma for its metabolic needs and even survival, a focal myoepithelial cell layer disruption in a given duct could have a number of consequences, including: (a) a localized loss or reduction of tumor suppressors and the paracrine inhibitory functions, which allow the associated tumor cells to undergo elevated proliferation [44-46], (b) focal alterations in the permeability for oxygen, which selectively triggers the exit of stem or progenitor cells from quiescence [47-48], (c) a localized increase of leukocyte infiltration, which directly export growth factors to the associated epithelial cells through direct physical contact [49-53], (d) the direct epithelial-stromal cell contact, which augments the expression of stromal MMP or represses the normal production and distribution of E-cadherin and other cell adhesion molecules, facilitating epithelial-mesenchymal transition and cell motility [54-56], (e) the direct exposure of the epithelial cells to different cytokines, which stimulate an aberrant expression of c-erbB2, which facilitates vasculogenic mimicry and tumor angiogenesis [57-58], and (f) the direct physical contact between newly formed cell clusters and stromal cells further stimulates the production of tenascin and other invasion-associated molecules that facilitate the stromal tissue remodeling and angiogenesis, providing a favorable micro-environment for epithelial cell proliferation and migration [59-60]. Together, these alterations could selectively favor monoclonal proliferation of the overlying tumor progenitors or a biologically more aggressive cell clone. Thus, the invasive and metastatic cells derive from the duct system may have greater potential to form tumor nests in the new tissue sites, and consequently lead to worse prognosis.

Implications of our hypothesis

If confirmed, our hypothesis would have a number of clinical implications. First, the application of double immunohistochemistry to identify normal appearing lobular clusters with malignancy-associated alterations (as those shown in Fig 5a-5d), and focal myoepithelial cell layer disruptions with “budding” tumor cells (as those shown in Fig 5e-5h) in clinic biopsies would significantly facilitate early detection of individuals at greater risk to develop invasive cancer or pending invasive lesions. Second, as if two independent mechanisms or pathways are involved for lobular and ductal cancer invasion, the precursors of invasive lesions for these tumors are very likely to differ substantially in their morphological, molecular, and/or biochemical profiles. As shown in Fig 5a-5d, the entire cell population within these morphologically normal appearing lobules may directly progress to invasive lesions after degradation of the associated myoepithelial cell layers. In sharp contrast, only the cell clusters overlying focally disrupted myoepithelial cell layers in the ducts (Fig 5e-5h) may progress to invasive cancers through monoclonal proliferation of the overlying tumor stem cells or a biologically more aggressive cell clone. Consequently, microdissection of these potential precursors of invasive lesions for gene expression profiling may lead to identification of more specific molecules for differentiation and intervention of invasive lobular and ductal cancer. Third, as it has been well documented that invasive cancer cells derived from lobular cancer tend to be more ER (+), PR (+), and HER-2 (-), compared to their stage-matched ductal counterpart [1-5], invasive and metastatic lesions derived from these tumors may have different responses to the same therapeutic regimen. Therefore, the development of more specific reagents or detection methods to differentiate lobular and ductal cells and their malignant derivatives may have significant therapeutic value.

Based on our own and other studies, we propose that the structural and functional difference in their surrounding myoepithelial cell layers may represent a trigger factor accounting for the substantial difference in clinical outcomes between ILC and IDC. Alterations in the myoepithelial cell layer may directly impact the clinical outcomes of ILC and IDC by controlling the genetic property and biological behavior of the precursors of invasive lesions, and by dictating the lobular and ductal tumors to follow different pathways for invasion and/or metastasis.