Artificially cultivating Chroogomphus rutilus is too inefficient to be commercially feasible. Furthermore, isolating C. rutilus mycelia in the wild is difficult. Thus, it is important to determine the natural habitat of its fruiting body. This study focused on the ecology of the C. rutilus habitat to isolate and classify beneficial microorganisms that could affect its growth, which could be used in future research on artificial cultivation. In total, 342 isolates were isolated from soil samples collected around a C. rutilus colony in the Beijing region. Of these, 22 bacterial and 14 fungal isolates were selected for sequencing and phylogenetic analysis, based on their growth characteristics and colony morphology. Using 16S rRNA gene sequence analysis, the bacterial isolates were divided into two monophyletic clusters which had significant hits to the genera Bacillus and Pseudomonas, respectively. Using internal transcribed spacer (ITS) sequence analysis, fungal isolates were divided into four monophyletic clusters: Penicillium, Trichoderma, Mortierella, and Bionectria. Moreover, the phylogenetic diversity of these isolates was analysed. The results indicated that numerous microorganisms were present in C. rutilus habitat. This was the first reported examination of the microbiological ecology of C. rutilus.

Chroogomphus rutilus (Schaeff.) O.K. Mill. is a type species in the genus Chroogomphus. The common names pine-spike and spike-cap are based on its shape and close growth association with pine trees. Based on records and our recent investigation, Chroogomphus spp. inhabit the northern hemisphere, including Asia, North America, and Europe [1]. C. rutilus is edible and especially flavourful when dried. Furthermore, it has been investigated as a source of antibiotics and other potentially useful secondary compounds. The fruiting body is economically important for food or herbal medicine use [2].

Artificial cultivation may have failed due to the complex habitat C. rutilus requires. C. rutilus may require specific soil chemical composition and the presents of certain plants and microbes in order to grow. Some researchers have examined the plants living in C. rutilus habitats [5]; however, little research has been done to investigate the microorganisms present. Because no organism lives entirely isolated, soil microorganisms could directly or indirectly affect spore germination and fruiting body formation [6]. Furthermore, organisms often establish biological interactions, such as symbiosis, competition, and autoecism. C. rutilus interacts with other fungi and bacteria in its habitat, and may affect each other's growth or life cycles [7].

Based on the known requirements of casing-soil for the half artificial cultivation of Morchella, Shen et al. (2008) examined the bacterial community contained in the fruiting body of Morchella using a denaturing gradient gel electrophoresis (DGGE) technology. To some extent, the results of sequencing the 16S rRNA genes of 7 kinds of bacteria reflect the bacterial community structure inside Morchella [8]. Shen et al. (2009) also reported that the investigation of fungal communities inhabiting Morchella growth soil using DGGE. Sequence analysis of 12 recovered dominant bands revealed the presence of 10 fungi whose growth may have been inhibited by the dominant Morchella [6]. All of the above studies suggest that co-occurring microbes play an important role in fungal growth.

This study was initiated to investigate the diversity of microorganisms isolated from soil near a C. rutilus colony in the Beijing region. Bacteria and fungi were obtained selectively from soil samples collected around C. rutilus growing areas in the Beijing region based on their growth characteristics and colonial morphology. The 16S rRNA gene sequences of the bacteria isolates and the ITS gene sequences of the fungi isolates were amplified and sequenced respectively. The phylogenetic diversity of the isolated bacteria and fungi was determined based on the 16S rRNA genes and ITS sequences, respectively. This was the first demonstration of the microbe surrounding C. rutilus.

Soil samples about 10 cm under the fruiting body of a C. rutilus colony in the Beijing region of the People's Republic of China were collected at an attitude of 790 m. The GPS coordinate was N40 57.186 E116 29.923.The samples were immediately transported to the laboratory for gradient dilution using autoclaved water and aliquots were transferred to appropriate growth medium. Three consecutive propagations using beef extract-peptone agar slants for bacteria and PDA media for fungi were conducted. After a 2-3-day incubation period at 28°C, single colony of per propagation was selected for observation. Out of the colonies owing the same growth characteristics and morphology, only one colony of each morpho-species was selected for further genetic sequencing. In this study, growth characteristics mainly included growth rate and colony morphologies of the isolated strains included size, color, diaphaneity of the colony, the degree of smoothness and so on. All strains in this study (Table 1) were preserved at ‑80°C in their respective liquid media with glycerol added to a final concentration of 15% (v/v).

Genomic DNA extraction from the isolates

Strains isolated in this study

Primers used in this study

ITS gene amplification, cloning, and sequencing

Recently, the ITS region of the ribosomal operon has become preferentially used for fungi classification instead of 18S ribosome RNA sequences [14]. The entire stretch of ITS1-5.8S-ITS2, approximately 750-bp long, was amplified using the universal forward primer ITS1 and the universal reverse primer ITS4 [15]. Ex taq polymerase (Takara, Japan) was used. The purification and sequencing procedures were the same as those described for the 16S rRNA sequences.

The 16S rRNA and ITS gene sequences of the isolated strains were compared with sequences in DDBJ/EMBL/GenBank using the basic local alignment search tool (BLAST) [16]. The isolates had significant hits to the genus which owed the lowest e-value in the results of BLAST. When more than one sequence had the same e-value, only the first sequence was selected. Further, sequences were aligned using the Clustal_X software [17]. The distances were calculated according to two-parameter method [18]. The phylogenetic tree was inferred using the neighbour-joining methods [19]. Bootstrap analysis was based on 1,000 re-samplings. The MEGA4.0 package [20] was used for all analyses. All 16S rRNA sequences of the Bacillus and Pseudomonas type strains were obtained from the websites at http://www.bacterio.cict.fr/b/bacillus.html and http://www.bacterio.cict.fr/p/pseudomonas.html, respectively. The ITS sequences of the fungi type strains were obtained from DDBJ/EMBL/GenBank.

Bacteria and fungi isolation from the soil samples

Sequencing and phylogenetic analysis of the 16S rRNA gene sequences

The nearly complete 16S rRNA gene sequences of the 22 bacteria isolates were amplified using the universal primers for the 16S rRNA sequence shown in Table 2 and sequenced. Comparing the 16S rRNA sequences with those in DDBJ/EMBL/GenBank, the strains labeled I2X, I3X, I4X, II2X, II3X, III1X, III3X, IV1X, IV3X, V1X, V2X, V3X, V4X, VI2X, VII1X, VII2X, and VII3X had significant hits to Bacillus spp. and those labeled I1X, II4X, III4X, IV2X, and VI3X had significant hits to Pseudomonas spp.. The 16S rRNA sequence GenBank accession numbers of these strains are indicated after the bacterial names in Table 1.

Neighbour-joining phylogenetic tree based on 16S rRNA gene sequences showing the distance of isolated strains with the nearest species of the genus Bacillus. Pseudomonas agarici ATCC25941 was used as an out group. Bootstrap percentage values as obtained from 1,000 resamplings of the date set are given at the nodes of the tree. Bar, 0.01 substitutions per nucleotide position. 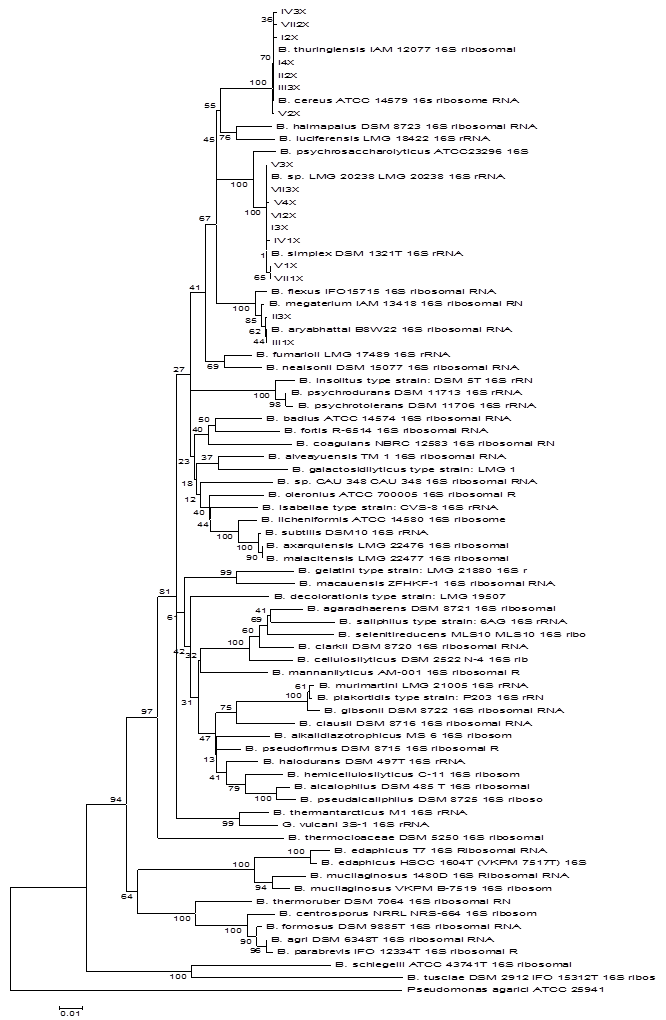 Neighbour-joining phylogenetic tree based on 16S rRNA gene sequences showing the distance of isolated strains with the nearest species of the genus Pseudomonas. Bacillus subtilis NCDO 1769T was used as an out group. Bootstrap percentage values as obtained from 1,000 resamplings of the date set are given at the nodes of the tree. Bar, 0.02 substitutions per nucleotide position. 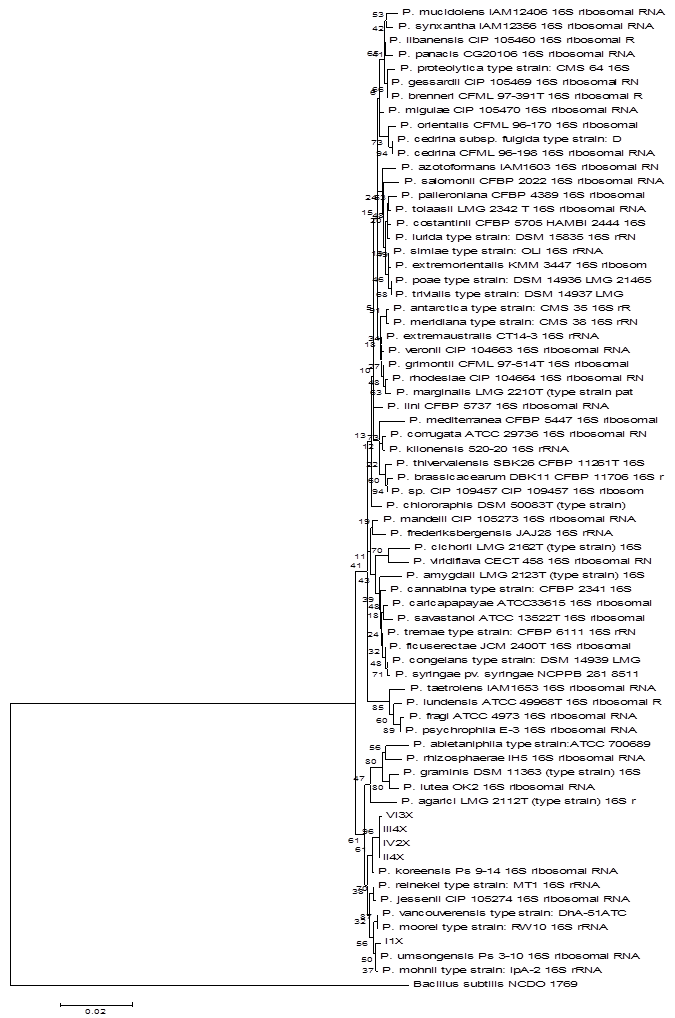 Neighbour-joining phylogenetic tree based on ITS sequences showing the distance of isolated strains with the nearest species of the genus Penicillium. Trichoderma viride ATCC20898 was used as an out group. Bootstrap percentage values as obtained from 1,000 resamplings of the date set are given at the nodes of the tree. Bar, 0.005 substitutions per nucleotide position. 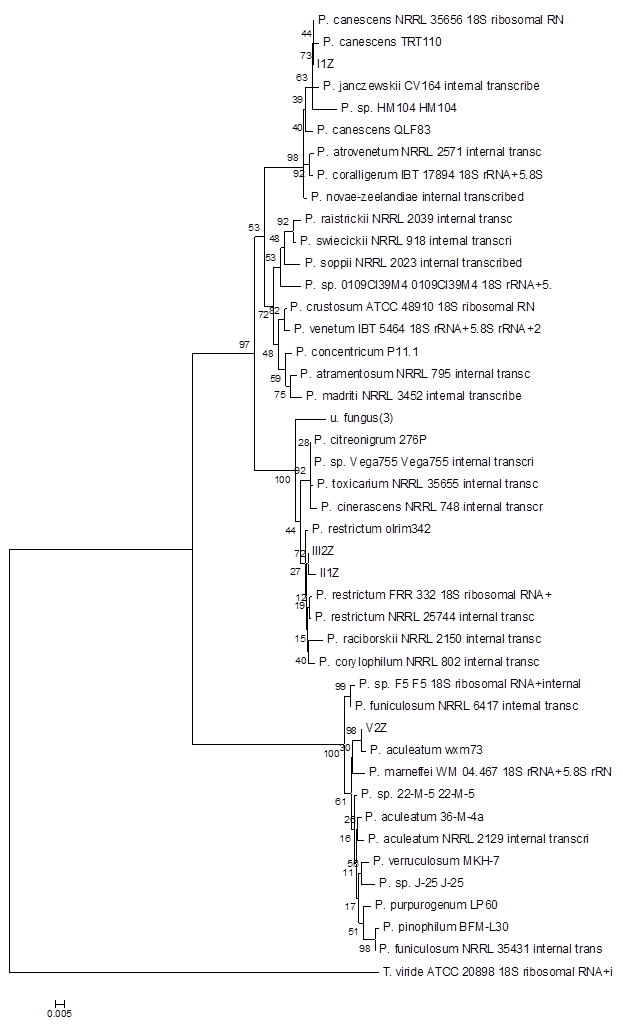 Sequencing and phylogenetic analysis of the ITS sequences

Neighbour-joining phylogenetic tree based on 16S rRNA gene sequences showing the distance of isolated strains with the nearest species of the genus Trichoderma. Aspergillus niger ATCC9642 was used as an out group. Bootstrap percentage values as obtained from 1,000 resamplings of the date set are given at the nodes of the tree. Bar, 0.05 substitutions per nucleotide position. 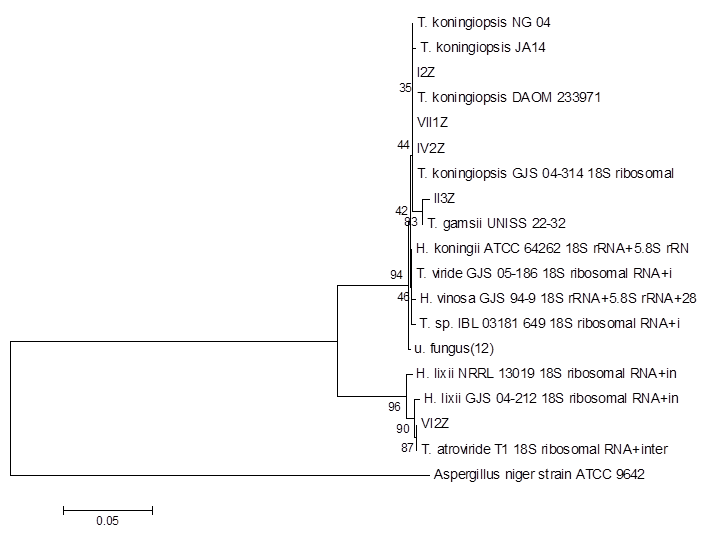 Neighbour-joining phylogenetic tree based on 16S rRNA gene sequences showing the distance of isolated strains with the nearest species of the genus Mortierella. Aspergillus niger ATCC9642 was used as an out group. Bootstrap percentage values as obtained from 1,000 resamplings of the date set are given at the nodes of the tree. Bar, 0.05 substitutions per nucleotide position. 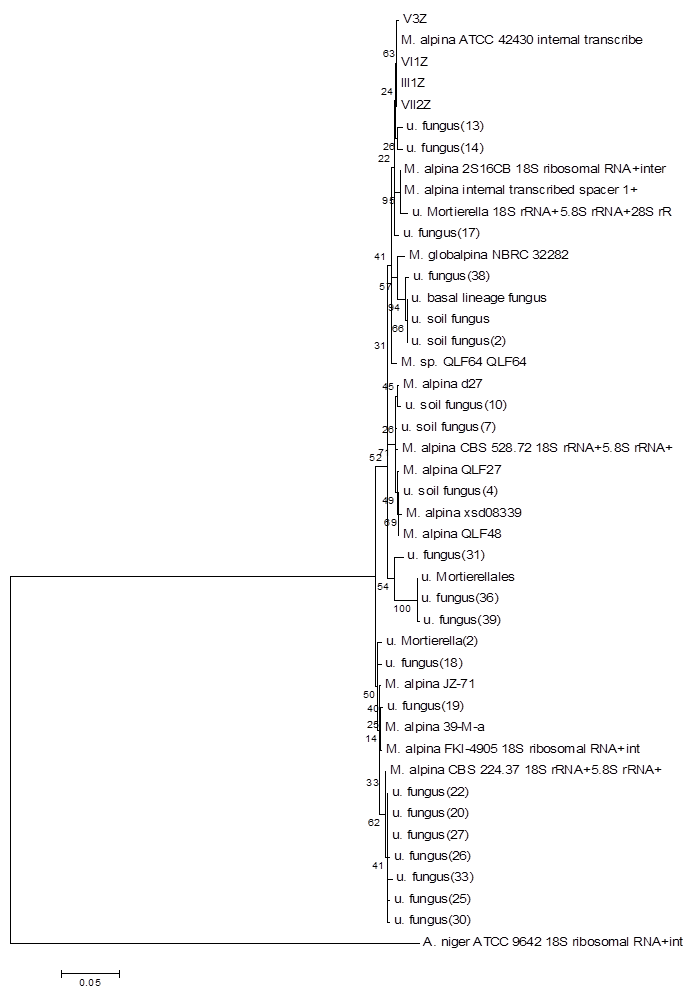 Neighbour-joining phylogenetic tree based on 16S rRNA gene sequences showing the distance of isolated strains with the nearest species of the genus Bionectria. Aspergillus niger ATCC9642 was used as an out group. Bootstrap percentage values as obtained from 1,000 resamplings of the date set are given at the nodes of the tree. Bar, 0.005 substitutions per nucleotide position. 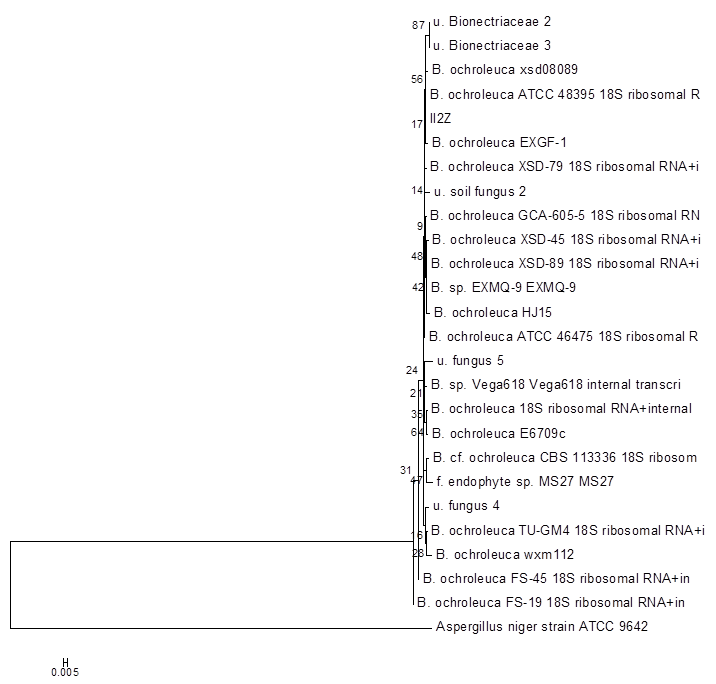 In the present study, 10 gram soil sample were resolved and serial diluted. Only a portion of the solution was spread on the appropriate media. Finally, 36 isolates were obtained for further classification and phylogenetic analysis. Limited by the sample size, there was the chance that some key microbes needed for C. rutilus might be missed. Moreover, traditional cultural method exhibit its limitations in the phylogenetic analysis, since only a small proportion of microbe can be obtained in laboratory condition [26]. Culture-indepentdent methods, such as metagenomic approach, could overcome these difficulties and limitations [27]. To solve these existing problems, metagenomic approach will be applied in the future study. Except of these, several important results from this investigation were summarized below.

First, of the 22 bacteria strains, 17, or about 80%, were Bacillus spp. It was reported that Bacillus spp. are abundant and widely distributed in agro-ecosystem [28, 29]. This could be because these Bacillus strains form a thick outer spore coat increasing resistance to extreme conditions, such as heat, ultraviolet radiation, toxic chemicals, and desiccation. Effects of Bacillus sp. on growth on mushroom was reported by Bis'ko et al. (1995) [30].

Second, four Pseudomonas spp. were isolated from the soil sample. Reports indicated that the presence of saprophytic bacteria, such as Pseudomonas spp., in the casing medium could induce fruiting body formation [31]. Moreover, secondary products excreted by Pseudomonas, such as insecticides and germicides, could affect the growth of C. rutilus mycelia in its natural habitat. Kloepper et al. (2004) reported that Pseudomonas spp. were one of the familiar plant growth-promoting rhizobacteria (PGPR) [32]. This explained the isolation of Pseudomomas spp. in the soil sample in this study. Further research on Pseudomonas spp. and C. rutilus interactions should be conducted, because this interaction might be the key point to artificial cultivation.

Finally, it is notable that the fungus strain labeled II2Z had significant hits to the genus Bionectria. Bionectria are endophytic fungi that can colonize living, internal plant tissue without any immediate or overt negative effects [36]. In fact, endophytic fungi were detected and reported in many plants. These fungi showed positive role to help protecting the plants against insects, nematodes, pathogens and so on [37, 38]. In the present study, Bionectria spp. was isolated from the soil sample together with the mycelium of C. rutilus. It could be deduced that Bionectria spp. might interact with the organism nearby. The organism perhaps was the nearby pine tree or the mycelium of C. rutilus. Based on the results obtained in the present study, the detail interaction between C. rutilus and Bionectria sp. II2Z requires more research to determine if this strain played the role on the fruit body formation of C. rutilus.

We thank the reviewers for the helpful comments and improvement of the text.

21. Baldwin BG. Phylogenetic utility of the internal transcribed spacers of nuclear ribosomal DNA in plants: An example from the Compositaogy. Mol Phylogenet Evol. 1992;1(1):3-16