TDP-43 and α-synuclein are two disease proteins involved in a wide range of neurodegenerative diseases. While TDP-43 proteinopathy is considered a pathologic hallmark of sporadic amyotrophic lateral sclerosis and frontotemporal lobe degeneration, α-synuclein is a major component of Lewy body characteristic of Parkinson's disease. Intriguingly, TDP-43 proteinopathy also coexists with Lewy body and with synucleinopathy in certain disease conditions. Here we reported the effects of TDP-43 on α-synuclein neurotoxicity in transgenic mice. Overexpression of mutant TDP-43 (M337V substitution) in mice caused early death in transgenic founders, but overexpression of normal TDP-43 only induced a moderate loss of cortical neurons in the transgenic mice at advanced ages. Interestingly, concomitant overexpression of normal TDP-43 and mutant α-synuclein caused a more severe loss of dopaminergic neurons in the double transgenic mice as compared to single-gene transgenic mice. TDP-43 potentiated α-synuclein toxicity to dopaminergic neurons in living animals. Our finding provides in vivo evidence suggesting that disease proteins such as TDP-43 and α-synuclein may play a synergistic role in disease induction in neurodegenerative diseases.

While mutation in TDP-43 is linked to ALS and FTLD (17-21), mutation of the α-synuclein gene is associated with PD (22-26). Overexpression of TDP-43 with or without pathogenic mutation causes a broad neurodegeneration in rodents (27-32), suggesting that normal TDP-43 of elevated expression is neurotoxic. Overexpression of TDP-43 in the substantia nigra induces dopaminergic neuron death (33), suggesting that TDP-43 neurotoxicity is not restricted to the neurons preferably affected in ALS and FTLD. Overexpression of pathogenically mutated α-synuclein causes dopaminergic neuron death in transgenic mice at advanced ages (34). Neurodegenerative diseases are commonly thought of multifactorial pathogenesis. To test this hypothesis, we examined whether TDP-43 potentiates α-synuclein toxicity to dopaminergic neurons in transgenic mice. Transgenic overexpression of the normal TDP-43 caused a significant loss of neurons in the frontal cortex, but not in the substantia nigra pars compacta (SNpc). When normal TDP-43 and mutant α-synuclein were overexpressed simultaneously in the dopaminergic neurons, a dramatic loss of the neurons was detected in the SNpc of transgenic mice. Our results suggest that neurotoxic factors such as TDP-43 and α-synuclein may play a synergistic role in the pathogenesis of neurodegenerative diseases.

Animal use followed NIH guidelines and the animal use protocol was approved by the Institutional Animal Care and Use Committees at Thomas Jefferson University. As described in our publication (32, 35), the cDNA of normal human TDP-43 and its mutant form (M337V substitution) was created by PCR and was cloned into CAG expression vector. Linearized transgene constructs were injected into the pronuclei of fertilized eggs of C57BL/6J mice. Transgenic mice were identified by PCR amplification of the human TDP-43 transgene with the following primers: 5'-TGCGGGAGTTCTTCTCTCAG-3' (forward) and 5'-AGCCACCTGGATTACCACCA-3' (reverse). Dual-mutant α-synuclein transgenic mice were received from Dr. Richfield and were genotyped by PCR analysis as described in the original publications (34, 36). All transgenic mice were maintained on C57BL6 genomic background.

Mouse psychomotor activity was measured by Rotarod test as described previously (35, 37). Mice were tested on a rotating Rotarod (Med Associates) twice a week since three months of age. On a testing day, a mouse was tested three times separated by 10 minutes of rest and was allowed to run on a rotating Rotarod with accelerated speeds for a maximal period of five minutes. The average time of three tests was calculated as the latency to fall from rotating rotarod.

Mouse tissues were homogenized in RAPI buffer supplied with protease inhibitors (Promega). Tissue lysates were cleared by centrifugation and proteins in cleared lysates were measured by BCA assay (Pierce). Total proteins of 25 µg in each lysate were separated on 10% SDS-PAGE and were blotted onto PVDF membrane. The immunoreactivity of both human and mouse TDP-43 was detected with a polyclonal antibody (1: 500; Proteintech) and the immunoreactivity of human TDP-43 was detected with a mouse monoclonal antibody (1: 1000; Abnova, 2E2-D3). Comparable loading of total proteins among samples was estimated by probing the same membranes with a mouse monoclonal antibody recognizing mouse glyceraldehyde-3-phosphatedehydrogenase (1: 2000; Abnova). Immunoreactivity was visualized by ECL reaction (Pierce).

As described in our publication (32), the ventral and dorsal nerve roots of TDP-43 transgenic mice were examined for axon degeneration by toluidine blue staining. Mice were anesthetized and perfused with a mixture of 4% PFA and 2% glutaraldehyde in 0.1 M phosphate buffer (pH 7.4). The L4 ventral and dorsal roots were removed and post-fixed in the same fixative at 4°C overnight. The roots were further fixed in 1% osmium tetroxide in 0.1 M phosphate buffer (pH 7.4) for 1 h. The well-fixed tissues were dehydrated in graded ethanol and were embedded in Epon 812 (Electron Microscopic Sciences, Fort Washington, PA). Nerve roots were transversely cut into 1 µm-thick sections. Axons in the nerve roots were examined in the semi-thin sections under a light microscope (Nikon 80i).

Mouse tissues were fixed in 4% PFA and were cryopreserved in 30% sucrose. On a Cryostat, mouse brain was cut into coronal sections of 20 µm and mouse spinal cord was cut into traverse sections of 15 µm. Human TDP-43 immunoreactivity was detected by incubating tissue sections with a monoclonal antibody specific for human TDP-43 (1: 500; Abnova, 2E2-D3) and was visualized using an ABC kit in combination with diaminobenzidine (Vector). Immunostained sections were lightly counterstained with hematoxylin to display the nuclei. Double-labeling immunofluorescence staining was performed as described previously (32). The following antibodies were used for immunofluorescence staining: mouse monoclonal antibody to human TDP-43 (1: 500; Abnova, 2E2-D3), chicken antibody to ubiquitin (1: 1000; Sigma), rabbit antibody to tyrosine hydroxylase (TH; Pel-Freez; 1:1000), and mouse monoclonal antibody to human α-synuclein (1: 1000; Abcam, 4B12). Frozen sections of the gastrocnemius muscle were stained with hematoxylin and eosin (H&E) to display tissue structures.

As described in our publication (38), the number of dopaminergic neurons in the SNpc was estimated by stereological cell counting. PFA-fixed mouse midbrain was cut on a Cryostat into four series of sections and every fourth section was immunostained for TH. The number of TH-positive neurons in the SNpc was estimated with fractionator-based stereology software (Stereologer), which was run on a PC computer attached to a Nikon 80i microscope with a motorized XYZ stage (Prior). The number of cortical neurons in the frontal cortex was also estimated by stereological cell counting as described previously (39).

To develop a genetic animal model for TDP-43-linked ALS and FTLD, we created transgenic mice expressing the human TDP-43 with or without a pathogenic mutation (Fig. 1). 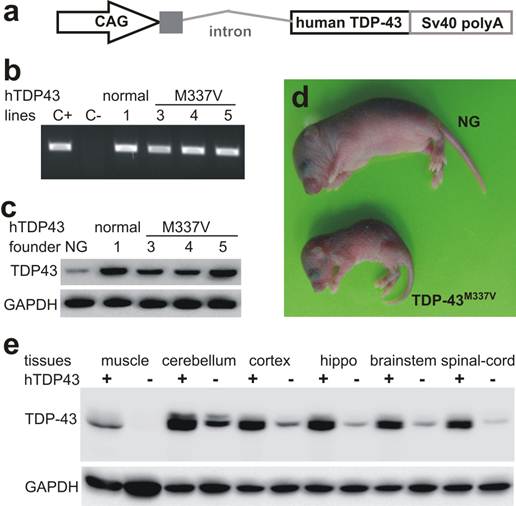 The hybrid promoter CAG is shown to drive transgene expression robustly and ubiquitously in rodents (35, 40, 41), and thus it was used to drive TDP-43 transgenes in mice (Fig. 1a). We chose M337V substitution as an example of TDP-43 mutations because this mutant causes typical ALS with a middle-age onset of symptoms (18). We obtained four transgenic founders expressing mutant TDP-43M337V and one founder expressing normal TDP-43 (Fig. 1). These transgenic founders were born of normal sizes; three TDP-43M337V founders lost mobility soon after birth and died within 10 days of birth (Fig. 1d). One TDP-43M337V female founder lived to 4 months of age, but it was infertile and died shortly after immobility was observed. We examined this mutant founder for neuronal and axonal degeneration in the spinal cord and nerve roots, but did not detect a significant loss of spinal motor neurons or motor axons. Similar to our finding in transgenic rats (32), constitutive overexpression of mutant TDP-43 in mice caused severe phenotypes in transgenic founders, preventing transgenic lines from establishment. By contrast, the transgenic founder overexpressing normal TDP-43 was healthy and fertile.

TDP-43-positive inclusion is a hallmark of sporadic ALS and FTLD (42, 43), suggesting that TDP-43 may be involved in the pathogenesis of the sporadic diseases. We used TDP-43 transgenic mice of the sixth generation for the following experiments. A robust expression of human TDP-43 was detected in the brain, spinal cord, and skeletal muscles of TDP-43 transgenic mice (Figs. 1e, 2b, 3b, and 3c), but not in the tissues of nontransgenic controls (Figs. 2a and 3a). On a homogenous genomic background, TDP-43 transgenic mice did not develop abnormality in psychomotor activity by age of one year (Fig. 2c). Accordingly, TDP-43 transgenic mice did not develop detectable pathology in the spinal motor neurons (Fig. 2d-2e), in the dorsal and ventral nerve roots (Fig. 2f-2i), and in the skeletal muscles (Fig. 2j-2k). Mutation of TDP-43 is also linked to FTLD (44). Altered expression of normal TDP-43 may affect cortical neurons in transgenic animals (32). We assessed cortical and hippocampal neurons by an unbiased method—stereological cell counting and detected a significant loss of cortical neurons in the transgenic mice at advanced ages (Fig. 3d-3i). Ubiquitinated TDP-43 aggregates are common to sporadic ALS and FTLD (42, 43). We examined these pathologies in TDP-43 transgenic mice, but did not detect typical TDP-43 or ubiquitin aggregates in the brain and spinal cord of the aged mice (Fig. 4a-4l). Consistent with our findings in TDP-43 transgenic rats (32), ubiquitin and TDP-43 aggregation is not essential to neuronal death. 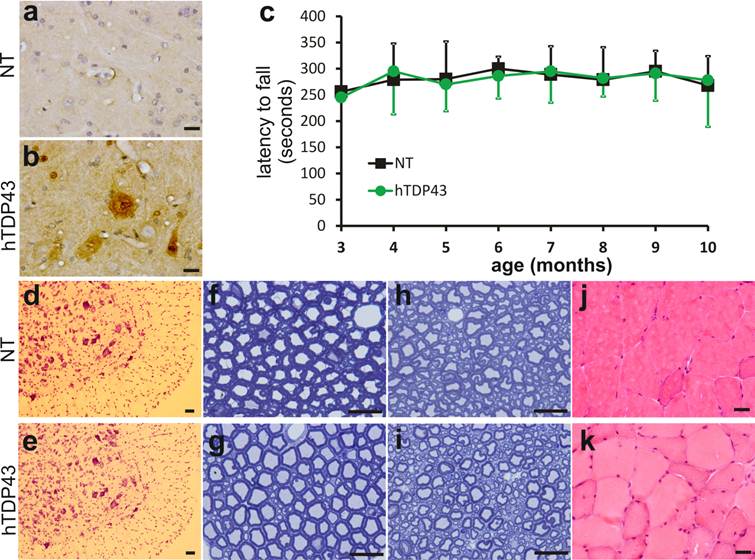 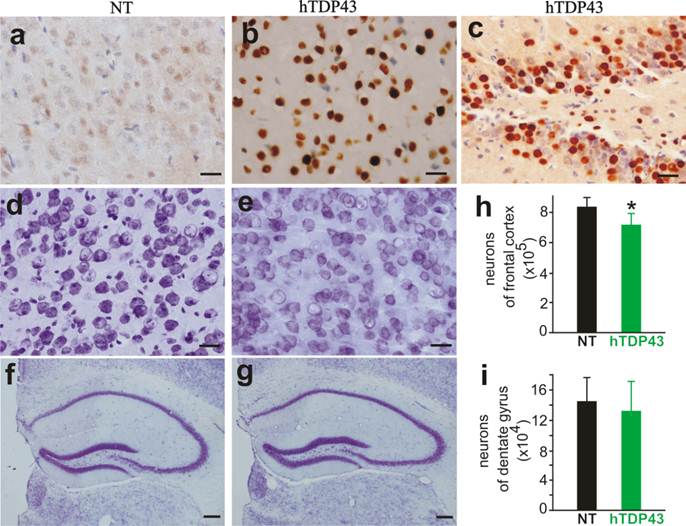 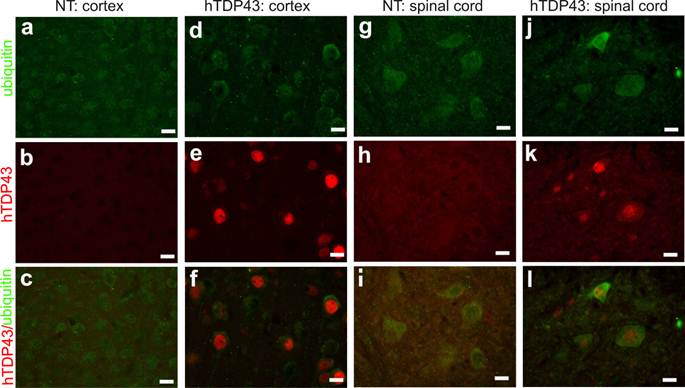 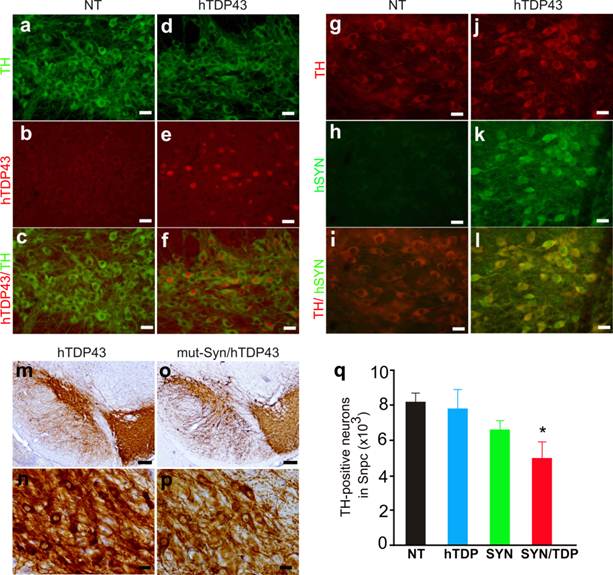 Consistent with our findings in transgenic rats (32), pathogenically mutated TDP-43 exhibited higher toxicity than the wildtype form when overexpressed in transgenic mice. Normal TDP-43 of elevated expression was sufficient to induce neurotoxicity in vivo. Moreover, TDP-43 and mutant α-synuclein synergistically induced neurotoxicity when concomitantly overexpressed in the dopaminergic neurons of transgenic mice, suggesting that neuron death is a convergent outcome of the toxicity of disease factors in neurodegenerative diseases such as PD.

While the nature of pathogenic mutation in TDP-43 remains largely unknown, TDP-43 with pathogenic mutation or elevated expression is neurotoxic in vitro and in vivo (28, 45-48). Pathogenic mutation of TDP-43 may cause a gain of function, a loss of function, or a dominant negative effect. The information available is not sufficient to determine the nature of TDP-43 mutation. Silencing of TDP-43 expression by RNAi induces neuronal death in culture (49, 50). Deletion of TDP-43 causes a defect at the neuromuscular junction in Drosophila melanogaster (51). Constitutive or temporal deletion of TDP-43 in mice induces severe phenotypes (52, 53), underscoring the importance of TDP-43 in cellular function. It remains unclear whether neurodegeneration can be induced by cell-specific deletion of TDP-43 in conditional knockout mice. Forced overexpression of human TDP-43 in mice deregulates the expression of mouse endogenous TDP-43 (27). Since it is not known whether human TDP-43 can function properly in mouse tissues, addition of normal human TDP-43 to mouse genome may or may not enhance the functions of TDP-43. In addition, transgenic overexpression of mutant TDP-43 is unable to differentiate a gain of function from a dominant negative effect because both types of mutation can induce disease in transgenic animals (54-56). Although a more sophisticated model such as a TDP-43 knockin mouse is required for determining the natures of TDP-43 mutation, our results, along with previous findings (27, 28, 45-48, 50, 52, 53), suggest a possible gain of function in TDP-43 mutation. We previously showed that overexpression of normal TDP-43 does not induce ALS disease in transgenic rats (32). Consistent with our finding in rats, overexpression of normal TDP-43 in mice failed to induce ALS phenotypes. Interestingly, overexpression of normal TDP-43 caused a significant (though moderate) loss of cortical neurons in asymptomatic mice at advanced ages. It could not be ruled out that overexpression of normal TDP-43 may induce cortical neuron degeneration in aged rats. We will examine cortical neurons in normal TDP-43 transgenic rats at advanced ages in a follow-up study.

The authors declare no conflicts of interest.