Objective: Grb2-associated binder 2 (Gab2), a member of the family of Gab scaffolding adaptors, transmits and amplifies the signals from receptor tyrosine kinases. A recent study demonstrated that Gab2 was over-expressed in breast cancers and metastatic melanomas, and Gab2 was an oncogenic protein. However, the roles of Gab2 in lung cancers are largely unknown.

Method: In this study, to investigate whether Gab2 expression could be a characteristic of lung cancers, we analyzed the expression of Gab2 in 88 lung frozen tissue samples and 122 paraffin-embedded tissue specimens, using quantitative real-time-PCR, immunohistochemistry and western blot.

Conclusion: Our data indicate that Gab2 is over-expressed in malignant lung tissues compared with that in normal lung tissues, and suggest that Gab2 expression may play a role in lung cancer development.

Lung cancer is the leading cause of cancer related mortality in the world. It accounts for almost a million deaths annually and results in more deaths than breast, gastric and colon cancers combined. The Grb2-associated binder (Gab) proteins including mammalian Gab1, Gab2 and Gab3, comprise a family of scaffolding or docking adaptor proteins [1]. Gab proteins are recruited to activated receptors by direct or indirect mechanisms, mostly indirectly via Grb2. Gab2 undergoes tyrosine phosphorylation, creating a number of docking sites to mediate interactions with SH2 domain-containing proteins such as the tyrosine phosphatase SHP2 and the p85 subunit of PI3K. The interaction of Gab2 with SHP2 activates Ras-Erk signaling, whereas its association with the p85 subunit of PI3K is crucial in mediating the PI3K-AKt signaling [2, 3].

Recent studies provide evidence that Gab2 plays a critical role in human cancer. Gab2 is overexpressed in breast cancers [4, 5]. Gab2(-/-) cancer cells exhibited decreased migration and impaired Erk activation, suggesting its role in promoting mammary tumor metastasis [6]. In addition to breast tumorigenesis, Gab2-mediated signaling has been implicated in chronic myelogenous leukemia and lymphoid leukemia. The Grb2-Gab2 pathway is critical for leukemic transformation by Bcr-Abl [7]. Although these studies suggest the importance of Gab2-mediated signaling in breast cancer and leukemia, its role in lung cancer is unclear.

In this study, we identified the expression of Gab2 in lung cancers by quantitative real-time-PCR, western blot and immunohistochemistry to explore its role in lung cancers. We found that Gab2 expression in lung tumor samples was significantly higher than that in normal lung samples, and Gab2 may be as a molecular marker for neoplastic progression.

All the specimens were obtained from Tianjin Medical University Tumor Hospital (from March to May 2010). The samples included 88 lung frozen tissue samples and 122 Paraffin-embedded tissues (detailed information is shown in Table 1). After obtaining the fresh tissue specimens, we quickly put them into liquid nitrogen and stored them at -80°C. All investigations followed the tenets of the Declaration of Helsinki and were approved by the Review Board of the Tianjin Medical University Tumor Hospital.

Total RNAs were extracted from the frozen tissue specimens by using the EZ-10 spin column total RNA isolation kit (BioBasic, Canada) in accordance with the manufacturer's instructions. The frozen tissue specimens included 15 lung tumor specimens and their corresponding normal lung cancer tissues (away from the tumor >6cm and from the same donor). cDNA was synthesized through using the superscript first strand synthesis kit as per instructions of the manufacturer(TakaRa, Japan). 1 μg total RNA and 50 μmol/L oligo(dT)18 were incubated at 70°C for 10 minutes, placed on ice for 2 minutes, and cDNA synthesis mix was added. The reaction was incubated at 42°C for 1 hour and terminated at 75°C for 15 minutes. Real-time quantitative PCR reaction contained 25μL 2×SYBR Premix Ex Tap(TaKaRa, Japan), 2μL primer mix, 1μL50×ROX Reference Dye, 4μLcDNA, and 18μL deionized water to make a total volume of 50μL. All real-time PCR assays were performed in triplicate in a 96-well plate using the 7300 real time PCR system (Applied Biosystems, USA). Data analysis was performed using the SDS software (Applied Biosystems, USA) and the results were expressed at a relative mRNA expression level, calculated using the Pfaffl method with GAPDH as the reference gene [8].

58 frozen lung tissue specimens (20 normal lung tissues, 16 squamous cell carcinomas, 16 adenocarcinomas and 6 other types of lung cancers) were homogenized and lysed with RIPA buffer. Proteins were separated by SDS-polyacrylamide gel eleetrophoresis (PAGE), transferred to 0.45um polyvinylidene fluoride by electroblotting. The membranes were blocked with 5% bovine serum albumin (BSA) in tris-buffered saline tween-20 (TBST) and then probed with GAB2 antibody (cell signaling technology, Danvers, MA, USA) at a 1:1000 dilution in TBST with 1%BSA overnight. The membranes were then washed in TBST and probed with horseradish peroxidase-conjugated secondary antibodies at 1:5000 dilutions in TBST with 1% milk. After washing in TBST, the membranes were developed with the ECL western blotting detection system (Millipore, USA).The protein band density was quantified using the ImageJ software (Version 1.38x), with β-actin (Abmart, China) as a loading control. The relative expression of Gab2 protein was expressed as the ratio of Gab2 expression to β-actin expression.

Formalin-fixed, paraffin-embedded tumor tissues from 122 patients (25 normal lung tissues, 40 squamous cell carcinomas, 37 adenocarcinomas and 20 other types of lung cancers) were sectioned (4 μm thick), mounted on poly-L-lysine-coated glass slides, and allowed to dry overnight at 37°C. Briefly, slides were deparaffinized in xylene and transferred through two changes of 100% ethanol. For antigen retrieval, the slides were boiled in a pressure cooker at maximum heat for 2 minutes containing 0.01 mol/L sodium citrate (pH6.0) and cooling for 30 minutes at room temperature. Endogenous peroxidase activity was blocked in 0.3% H2O2 for 10 minutes at 37°C. Following incubation the slides were washed 3 times in PBS for 3 minutes each. Then slides were incubated with the primary antibody Gab2 antibodies (Santa Cruz Biotechnology, sc-9313, USA) at 1:100 dilution overnight at 4°C. After washing with PBS, the bound primary antibody was detected by using a ready-to-use secondary antibody kit (Zhongshan Goldenbridge Biotech, Beijing, China) and the chromogenic substrate 3,3-diaminobenzidine tetrahydrochloride(DAB). The specimens were counterstained with hematoxylin, mounted, and examined by light microscopy (Olympus BX50, Japan).

We utilized an immunohistochemical score (IHS) [9] to evaluate of the immunohistochemical results. An HIS score of 9-12 was considered strong immunoreactivity, 5-8 was considered moderate, 1-4 was considered weak, and 0 was scored as negative. 0-4 were regarded as low expression, 5-12 were regarded as high expression. All of the slides were confirmed by the pathologist of tumor hospital and there were no differences in interpretation of immunohistochemical results between two pathologists. The percentage of positive cells was calculated by counting more than 1000 cancer cells in randomly selected high-power fields (10 × 40). Routine controls using PBS instead of the primary antibody were included to verify specificity.

Statistical analysis was carried out using SPSS version 11.5. Paired samples t-test and one-way analysis of variance (ANOVA) were used to analyze the Gab2 expression in different group. Chi-square test or Fisher exact test was used to assess the relationship between Gab2 expression and clinic pathological features. Differences were considered statistically significant when P- value was < 0.05.

The mRNA expression of Gab2 in human lung cancers

To identify whether Gab2 gene is critical for lung cancers, we examined Gab2 mRNA expression in 15 lung cancer tissues and their corresponding normal lung tissues. All cases were available for evaluation of Gab2 mRNA expression by quantitative real-time PCR. The result showed that up-regulation of Gab2 mRNA in 10 lung tumor samples compared to that in corresponding normal lung tissues, which were peripheral normal tissues from the same donor (Figure 1). Data were analyzed by paired-samples t test (t=2.632, P=0.020<0.05).

The overexpression of Gab2 protein in human lung cancers 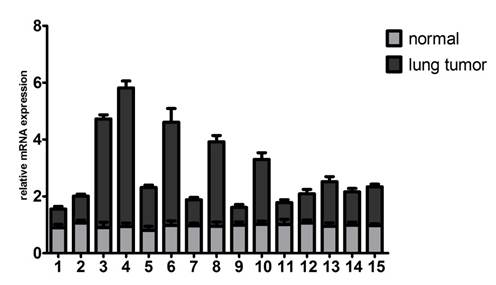 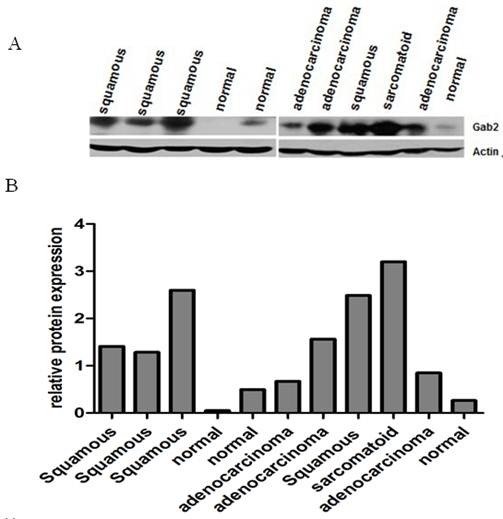 22 of 25 normal lung tissues were negative for Gab2, and only 3 were positive. In contrast, 51.35% (19/ 37) lung adenocarcinomas, 62.5% (25 / 40) lung squamous cell carcinomas and 75% (15 /20) other types of lung cancer tissue specimens showed positive immunoreactivity for Gab2 antibody, exhibiting an increased intensity of staining compared with that of normal lung tissues specimens. 20 other types of lung cancers included 1 lymphoepithelioma-like carcinoma of the lung, 1 basaloid squamous carcinoma of the lung, 2 malignant tumors, 3 small cell carcinomas, 4 pulmonary sarcomatoid carcinomas, 4 large cell carcinomas and 5 adenosquamous carcinomas. Results of Gab2 protein expression score were shown in Figure 5 (P<0.01, chi square test), but there is no statistical significance of Gab2 expression among 3 groups of lung tumor specimens. 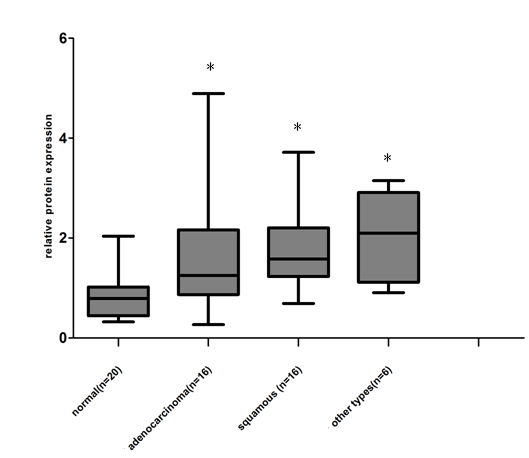 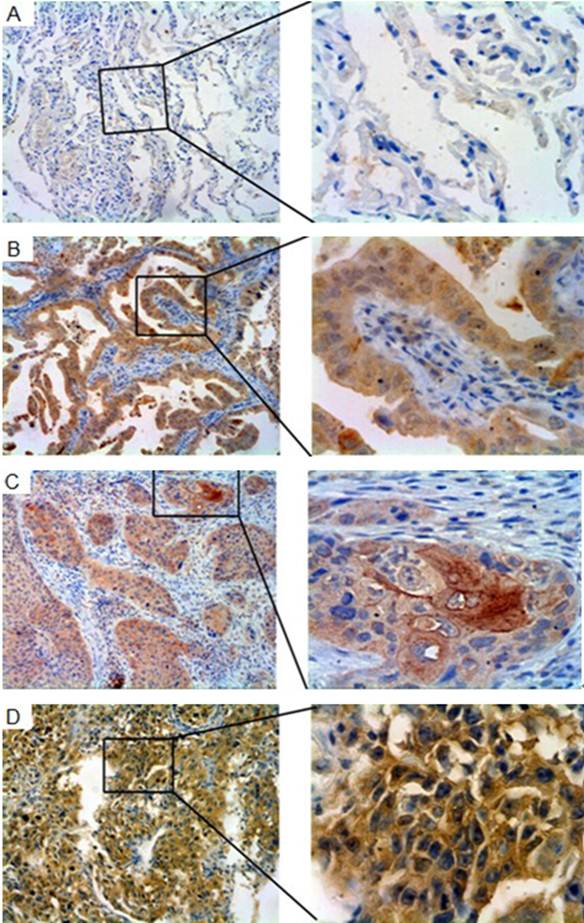 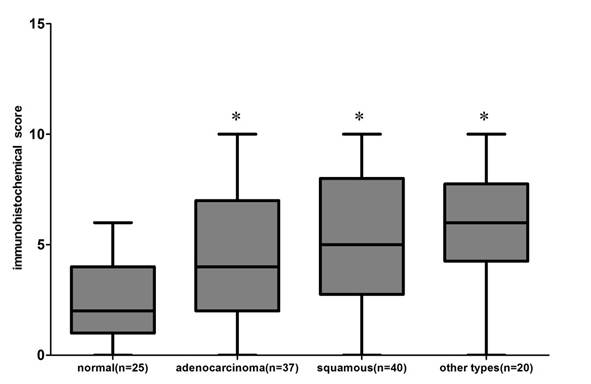 As bona fide signal transducers, Gab proteins also contain features that are involved in the transduction and amplification of receptor-derived signals. The Gab2 is increasingly implicated in JAK/STAT signaling [10] and Gab2-deficient mice also display an osteopetrotic phenotype that is explained by the role of Gab2 as a key regulator of RANK signaling [11]. A recent study showed that activation of PI3K by c-Kit is dependent both on the direct PI3K-binding site in c-Kit and the phosphorylation of Gab2 [12]. Through the recruitment of PI3K to activated receptors, Gab proteins contribute to the initiation of signaling pathways promoting cellular growth, survival, migration and proliferation [3].

Gab2 is developing a strong track record as an oncoprotein in various solid tumors. Firstly, Gab2 is frequently over-expression in human breast cancer cell lines and primary tumors, especially in the ductal carcinoma in situ (DCIS) [13]. The original study on Gab2 in breast cancer demonstrated that the high expression of both Gab2 mRNA and protein was detected in the majority of the estrogen receptor (ER)-positive lines [4]. Over-expression of the human Gab2 gene has also been reported recently for ovarian [14], gastric cancer [15] and acute myeloid leukemia(AML) [16]. Some researchers also find that GAB2 modifies late-onset Alzheimer's disease (LOAD) risk in APOE epsilon4 carriers and influences Alzheimer's neuropathology [17, 18]. Gab2 is also over-expression in metastatic melanoma and low expression levels in melanocytic nevi and primary melanomas [2], suggesting that Gab2 overexpression might represent a marker of neoplastic progression.

Gab2 can stimulate both Erk and AKT signaling through its interactions with SHP2 and p85 subunit of PI3K respectively. 11q13-14 amplification is observed in several types of malignancy including melanoma [19], breast [20, 21], and ovarian cancer [22]. We do not demonstrate which signaling transduction pathway is involved in lung cancer, and a further study should be made in the future. But, a recent study showed that association of c-Met with PI3K and Gab2 was diminished by inhibiting c-Met in small cell lung cancer [23] and ablation of Gab2 severely suppressed lung metastasis [6], suggesting Gab2 may be an important therapeutic target. Our findings highlight a novel role of Gab2 in lung cancers and underscore the potential utility of Gab2 as a target for new molecular directed therapies.