Gastric cancer remains one of the most frequently occurring malignancies, and ranks as the second leading cause of mortality next to lung cancer [1]. Although alterations in a large number of oncogenes and tumor suppressor genes have been reported in gastric carcinomas [2], the molecular mechanisms underlying the pathogenesis of gastric carcinomas remain to be fully defined.

miRNAs are small, noncoding, single-stranded RNAs that bind to complementary sequences in the 3' untranslated region (UTR) of their target mRNAs and induce mRNA degradation or translational repression [3]. miRNAs are involved in various cell functions, including proliferation, differentiation and apoptosis. Characteristic miRNA signatures have been identified for human gastric cancer, which predict disease status and clinical outcome [4-9]. Among them, miR-148a was one of the most frequently downregulated miRNAs in miRNA profiles of gastric cancers [4, 7, 8], and correlated with tumor size [9] and node metastasis [7]. Previous studies have shown that miR-148a plays important roles in cancer cell proliferation, response to anti-cancer chemotherapy, and metastasis in some tumor types including cholangiocarcinoma, prostate, esophageal and colon cancers [10-15]. For instance, downregulation of cytokine interleukin-6-regualted miR-148a contributes to cell proliferation by its target DNMT1 in malignant cholangiocytes [10]. In prostate cancer PC3 cells, miR-148a could inhibit cell proliferation, migration and invasion, and increase the sensitivity to anti-cancer drug [11]. However, the functional roles and target genes of miR-148a in gastric cancer remain unknown.

To explore the tissue-specific expression pattern of miR-148a, we detected miR-148a expression in different tissues of mouse by Northern blot. miR-148a expression was relatively high in stomach, heart, intestine, colon and liver (Fig. 1A). To visualize the spatial localization of miR-148a in whole-stomach tissue of mouse, we applied locked nucleic acid in situ hybridization. Unlike with the mismatch control probe (scrambled miRNA), hybridization with miR-148a-specific probe revealed that miR-148a was expressed at the bottom half of glandular gastric epithelium, where parietal and chief cells resided (Fig. 1B). 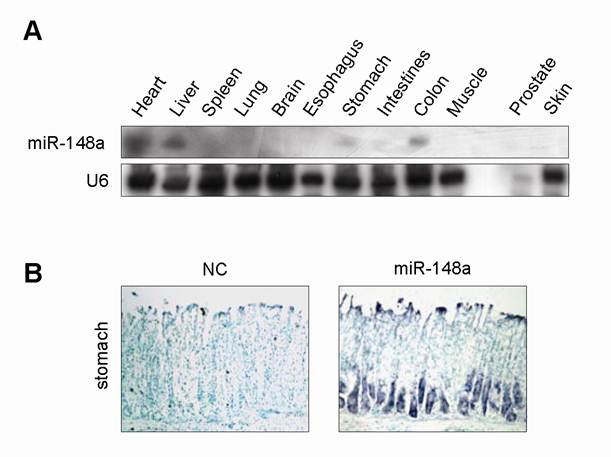 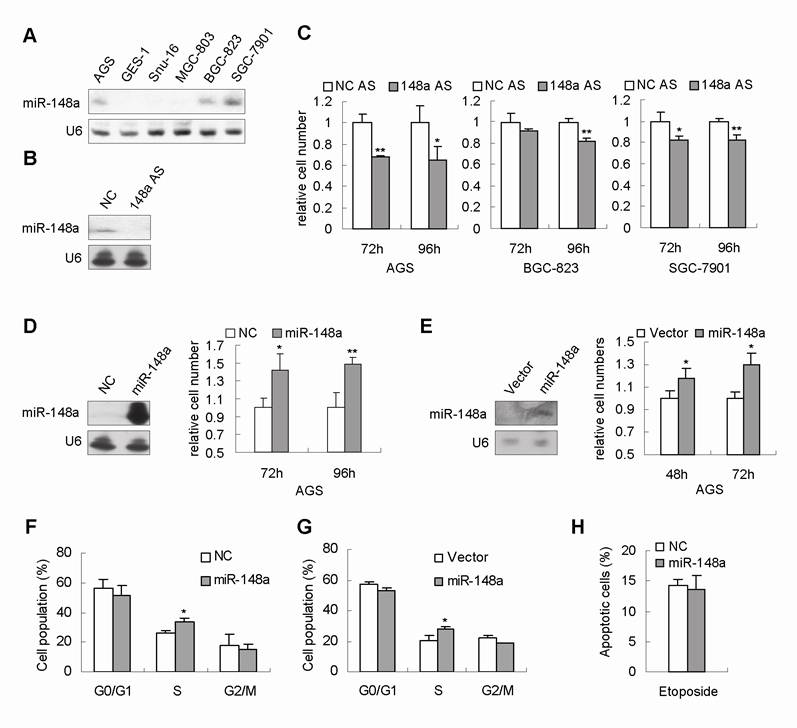 Several independent lines of evidence have shown that miR-148a was one of the most frequently downregulated microRNAs in human gastric carcinomas [4, 7, 8]. These studies led us to speculate that miR-148a dowregulation could contribute to gastric cell proliferation. We first detected miR-148a expression in 6 human gastric cancer cell lines. Northern blot results showed that miR-148a expression in AGS, BGC-823 and SGC-7901 cells was relatively higher than that in GES-1, BGC-803 and SNU-16 cells (Fig. 2A). Next, to evaluate the role of miR-148a downregulation in gastric cancer cells, we engineered miR-148a with antisense oligonucleotides (miR-148a AS) to decrease the endogenous miR-148a expression in 3 human gastric cancer cell lines, AGS, BGC-823 and SGC-7901, respectively. The downregulation of miR-148a were confirmed by Northern Blot (Fig. 2B). Cellular proliferation assays were performed on the miR-148a-AS-tranfected cells. To our surprise, miR-148a knockdown inhibited cell proliferation by 20-40% after 96 hours in AGS, BGC-823, and SGC-7901 cells (Fig. 2C, p<0.05).

To substantiate the function of miR-148a in gastric cell proliferation, we transfected AGS cells with miR-148a mimic. Northern Blot confirmed the increased expression of miR-148a in the transfectant (Fig. 2D). Viable cell numbers were counted at 72 and 96 hours after transfection. Consistent with our prediction, the cell numbers of miR-148a-transfected AGS cells at 72 and 96 hours were found to be increased by 42% and 48%, respectively, compared with that of scrambled-miRNA-transfected cells (Fig. 2D, p<0.05). Moreover, we established a stable cell line (AGS-miR-148a) in which miR-148a expression was significantly higher than that in AGS stably transfected with empty vector (AGS-vector) (Fig. 2E). Consistently, the cell numbers of AGS-miR-148a at 48 and 72 hours were increased by 18% and 30%, respectively, compared with that in control cells (Fig. 2E, p<0.05).

It is known that abnormal cell proliferation is related to the altered cell cycle. Cell cycle analysis was conducted in AGS cells transiently transfected with miR-148a mimic. The proportion of cells corresponding to S phase was higher in miR-148a-transfected AGS (34%±2.9%) than that in control cells (26%±2.1%, p<0.05, Fig. 2F). Similar results were obtained in the stable miR-148a-expressing AGS cells (Fig. 2G). These data suggested that miR-148a could promote cell proliferation by increasing the population of cells in S phase. In addition, we checked the effect of miR-148a on apoptosis by FACS analysis, and no obvious differences were observed between miR-148a-tansfected AGS cells and control cells (Fig. 2H).

To determine the mechanisms by which miR-148a promotes gastric cell proliferation, bioinformatics analysis was performed to search for miR-148a targets. CDNK1B (encoding p27), a gene critical for cell cycle [15], was predicted as a putative target of miR-148a (Fig. 3A). p27 mRNA 3'UTR has a single predicted binding site that is highly conserved in mammals, and in chicken (Fig. 3A). To determine whether miR-148a could directly regulate p27, p27 mRNA 3'UTR encompassing the predicted binding site with or without mutation that would disrupt miRNA interaction (underlined in Fig. 3A), were inserted to the downstream of luciferase open reading frame in pGL3-CM reporter vector. When introduced into SGC-7901 cells, the wild type p27 3'UTR reporter showed a 39% reduction in luciferase activity in the miR-148a-transfected cells compared with that in scrambled-miRNA-transfected cells (Fig. 3B, p<0.01). Mutation of miR-148a binding site abrogated the repression of luciferase activity caused by miR-148a overexpression (Fig. 3B). Next, we pursued the ability of miR-148a to regulate the expression of endongenous p27. miR-148a overexpression with mimic in AGS cells dramatically repressed p27 expression (Fig. 3C). Conversely, miR-148a knockdown by AS dramatically enhanced p27 expression in BGC-823 cells (Fig. 3C), indicating that endogenous miR-148a could regulate p27 abundance. To examine the functional interrelationship between miR-148a and p27, AGS cells was simultaneously transfected with miR-148a mimic and p27-expressing vector (CMV-p27). As expected, overexpression of p27 dramatically rescued miR-148a-induced growth promotion (Fig. 3D, p<0.01), indicating that miR-148a enhanced cell proliferation possibly by repressing p27.

Finally, we detected the expression of miR-148a and p27 in 10 advanced gastric primary tumors, each one paired with adjacent nontumor gastric tissue from the same patient (Fig. 4A and 4C). Northern blot assays showed that the reduced expression of miR-148a was found in 100% (10/10) of human advanced gastric tumor tissues as compared with adjacent normal counterparts (Fig. 4A and 4B, p=0.005), indicating that miR-148a downregulation was a very common event in advanced gastric cancer. Furthermore, the inverse correlation was observed between miR-148a and p27 in tumor samples (r=0.648, Fig. 4D), suggesting that miR-148a could negatively regulate p27 expression in human gastric cancer.

Previous studies have shown that miR-148a could target its distinct targets to regulate cell proliferation in some cancer cells [10,12,16]. DNMT1, a direct target of miR-148a, plays important role to suppress cell proliferation in malignant cholangiocytes [10]. miR-148a, also targets and suppresses Microphthalmia associated transcription factor (Mitf), an important regulator involved in melanoma progression [16]. In the present study, we identified a new target, p27, possibly by which miR-148a could promote cell cycle progression and cell proliferation. Similarly, miR-148a could promote cell growth by repressing its target CAND1 expression in prostate cancer LNCaP cells [12]. These findings indicated that the different roles of miR-148a in regulating cell proliferation might depend on its distinct targets in different tumor cell types. miR-148b, which has the same “seed sequence” as miR-148a, was downregulated in gastric cancer, and could inhibit cell proliferation by targeting CCKBR [17]. Although CCKBR was a predicted target of miR-148a by bioinformatic analysis, it was not a real target of miR-148a by Western blot and luciferase reporter assay in our experimental system (data not shown), indicating that miR-148a and miR-148b, both belonging to the same microRNA family, might exert opposite roles in one cell type possibly by regulating distinct targets.

p27 was a direct target of miR-148a in gastric cancer cells. (A), The possible miR-148a binding site in CDNK1B (p27) mRNA 3'UTR was predicted by bioinformatic analyses. The mutant seed sequence was underlined. p27 had a single predicted binding site in mRNA 3'UTR that was highly conserved in mammals, and in chicken (the complementary sequences of seed sequence of miR-148a were highlighted). (B), Luciferase activities were measured in SGC-7901 cells cotransfected with the reporter constructs containing 3'UTR of p27 with or without mutant (underlined in A) and miR-148a mimic or negative-control miRNA. (C), Western blot assays confirmed that p27 expression were downregulated by miR-148a mimic in AGS cells and upregulated by miR-148a AS in BGC-823 cells. (D), p27 expression was significantly increased in p27-transfected AGC cells (CMV-HA-p27) compared with that in control cells (CMV-HA). The numbers of viable AGS cells were determined by cell count 72 hours after cotransfection with miR-148a mimic and CMV-HA-p27 vector. Values represent mean ± SD. n=3. **P<0.01 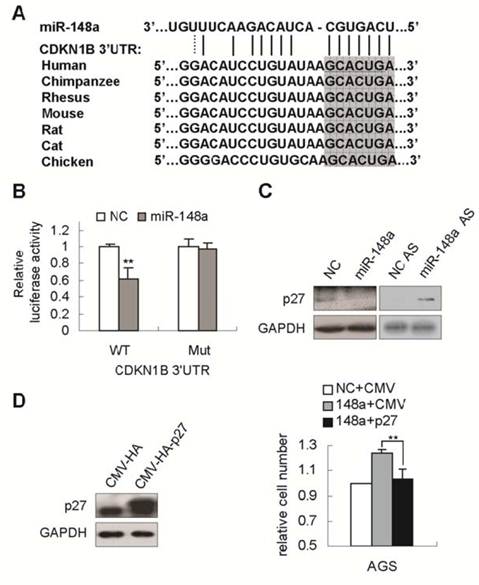 miR-148a was frequently and dramatically downregulated in human advanced gastric cancer and showed an inverse correlation with p27 expression in tumor samples. (A), miR-148a expression was determined by Northern blot in 10 advanced gastric primary tumors, each one paired with adjacent nontumor gastric tissue from the same patient. (B), Statistically significant downregulation of miR-148a in gastric cancers over matching normal tissues. P=0.005 by Wilcoxon signed rank test. Bars represent mean. (C), p27 expression was examined by Western blot in the same samples. (D), The relationship between miR-148a and p27 expression was detected by Spearman rank correlation analysis in tumor samples. r=0.648. p<0.05. 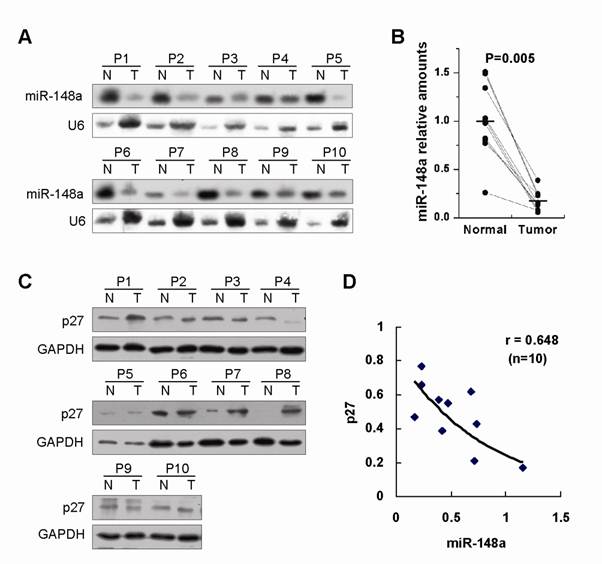 Human gastric tissues. Paired gastric cancer and adjacent non-tumor gastric tissues were obtained after review and approval by the General Surgery Department of PLA General Hospital of China. Both tumor and non-tumor tissues were histologically confirmed. Informed consent was obtained from each patient before operation. Tissue samples were immediately frozen in liquid nitrogen until RNA extraction.

Proliferation assays. 2×104 Cells were seeded into 24-well plate in triplicate, and the cell number was counted 48, 72 or 96 hours later under microscope using a hemocytometer.

Apoptosis assay. AGS cells were treated with etoposide (30μg/ml) or a matched concentration of diluents for 48 hours. After the treatment, cells were rinsed twice in cold PBS, and then analyzed for apoptosis by a PE-labeled Annexin-V/7-AAD assay. Cell samples (10,000 events) were analysed in a FACScan flow cytometer (BD Biosciences), and data were processed using FACScan software. 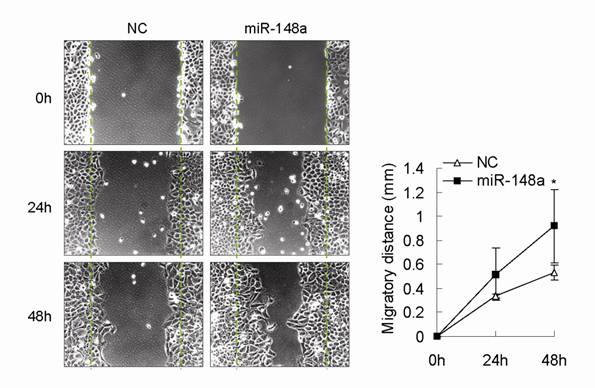