Cattle were used as a model organism in the present study. The bovine DSEL, EXTL1, HS6ST1, HS6ST3, NDST3 and SULT1A1 genes were annotated using a protocol described previously [6]. In brief, a cDNA sequence for each of these genes was retrieved from the GenBank database and then extended to a full length cDNA sequence using electronic rapid amplification of cDNA ends (e-RACE) [7]. Next, the full-length cDNA sequence was used to search for genomic DNA contigs against the 7.15X bovine genome sequence database (see the Bovine Genome Resources at NCBI). A total of 15 primer pairs were designed to amplify various targets located in 6 genes (Table 1). Approximately 50 ng of genomic DNA from each of six Wagyu x Limousin F1 bulls were amplified in a final volume of 10 μl that contained 12.5 ng of each primer, 150 μM dNTPs, 1.5 mM MgCl2, 50 mM KCl, 20 mM Tris-HCl and 0.25 U of AmpliTaq Gold polymerase (Applied Biosystems, Branchburg, NJ). PCR conditions were as follows: 95ºC for 10 minutes, 35 cycles of 94ºC for 30 sec, 60ºC for 30 sec, and 72ºC for 30 sec, and an extension step at 72ºC for 10 min. PCR amplicons were sequenced on a capillary sequencer by High-Throughput Sequencing Solutions (Seattle, WA). A total of 19 mutations were identified in five of these six genes, including 2 single nucleotide polymorphisms (SNP) in DSEL, 1 multiple nucleotide length polymorphism (MNLP) in EXTL1, 8 SNPs in HS6ST1, 3 SNPs and 1 MNLP in HS6ST3 and 4 SNPs in NDST3, respectively (Figure S1). Based on the initial linkage disequilibrium of these mutations observed among six Wagyu x Limousin F1 bulls and their compatibility in forming multiplexes for genotyping with the Sequenom iPLEX assay design, only six mutations (see Figure S1) were genotyped on 246 F2 animals by the Genomics Center at the University of Minnesota.

As described previously [8-9], 19 phenotypes were measured on these F2 animals, including 5 carcass, 6 eating quality and 8 fatty acid composition traits. Associations between genotypes and phenotypes were evaluated using linear models described previously by Daniels et al. [6]. Systematic factors in the linear models included the effects of harvest year (i=1,2,3), sex (j=1,2), sire (k=1,2,3,4,5,6), and age in days at harvest (as a covariate). The effects of markers were estimated either individually in the model or jointly in a multiple regression. In single-marker analyses, ANOVA was conducted by testing the model with the presence of marker effects (

) vs. the model assuming null marker effects ( yi*=µ+ei ), where yi* is the phenotypic value of the i-th individual which has been adjusted for the effects of harvest years, sexes, sires, and age in days at harvest using a full model. Equivalently, this yields the null hypothesis H0 : µ1 = µ2= µ3= µ vs. the alternative Hα : {Otherwise), where µi = µ+bi is the mean of the i-th genotypes. The resulting p values were adjusted using the Bonferroni correction [10]. Briefly, let the significance level for the whole family of tests be (at most) α, then the Bonferroni correction evaluate each of the individual association tests at a significance level of α/n, where n = 6 is the number of independent tests (i.e., association tests per trait under investigation). Alternatively, a raw p value, say pi, is adjusted to be pi* =n pi. Here, we regard a family of independent tests as all the association tests made per trait, but not across traits. In the multiple regression, models representing different networks were compared based on corresponding AIC (Akaike's information criterion) values, which is a measurement of the goodness of fit of an estimated model, panelized by a function of the number of estimated parameters [11]. Given the data, several models were ranked according to their AIC values, with the best model having the lowest AIC.

As indicated in Figure 1A, single-marker analysis revealed three genes significantly associated with five phenotypes (P<0.05), including DSEL with stearoyl-CoA desaturase activity index R2 ( calculated as (16:1/16:0) x 100%), EXTL1 with the amount of conjugated linoleic acid (CLA) and the relative amount of saturated fatty acids (SFA), and HS6ST1 stearoyl-CoA desaturase activity indices R2 (see definition described above) and R3 (calculated as (18:1/18:0) x 100%), and the relative amount of monounsaturated fatty acids (MUFA). Raw p values of these associations were also listed in the legend of Figure 1. Three genes exhibited varying quantitative trait modes (QTMs) on different phenotypes (Figure 1A). DSEL showed an overdominant effect on R2. EXTL1 also had an overdominant effect on SFA, but a dominant effect on CLA. HS6ST1 was significantly associated with R2 and R3 in a dominant QTM, while it significantly affected MUFA in an additive QTM. The p values of genetic modes were obtained from Monte Carlo simulation with 10,000 replicates. For example, over-dominance genetic mode was evaluated as Hα: {

was the estimated effect of genotype X. Note that, when two or more markers (genes) significantly affected a trait, the effects estimated by single marker analyses were theoretically biased. So, the three markers with their QTMs on different phenotypes were then merged with other markers previously reported by Jiang et al. [9] and combined into a multiple regression analysis for each trait in attempt to identify their roles in the genetic regulation of fatty acid composition. The AIC-based model selection suggested that the addition of HS6ST1 with SCD1 and UQCRC1 formed a three-gene network for R3 (Figure 1B), because it had a smaller AIC value (which was 1499.11) than the model featuring a two-gene (UQCRC1 and SCD1) network (which was 1521.87). 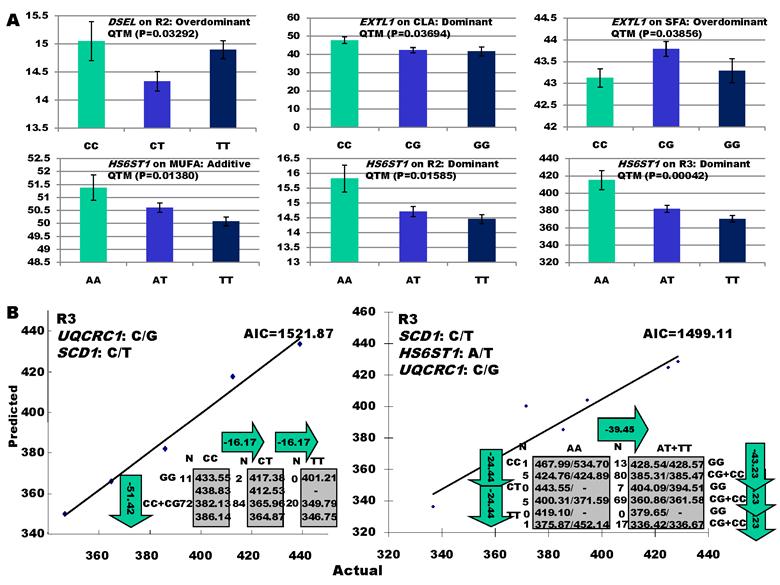 This work was supported by Merial Ltd. Animal Genomics Research Fund to Z.J. This activity was also funded, in part, with an Emerging Research Issues Internal Competitive Grant from the Washington State University, College of Agricultural, Human, and Natural Resource Sciences, Agricultural Research Center to Z.J. 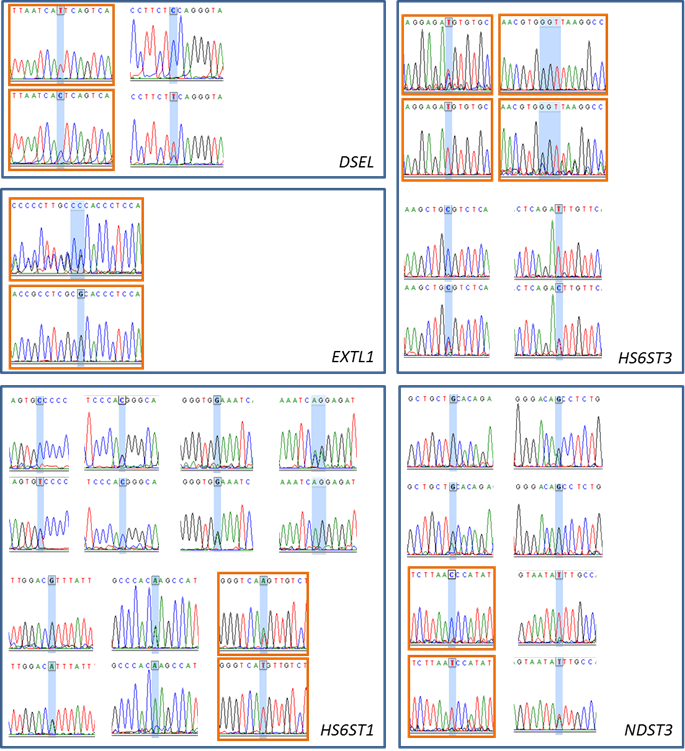