Cutaneous wound healing is a highly orchestrated multi-step process. An essential feature of a healed wound is re-epithelialization which relies on two basic functions of keratinocytes: proliferation and migration [1]. The re-epithelialization process is influenced by a combination of growth factors and cytokines including transforming growth factor-β (TGF-β) [2]. During wound healing, TGF-β1 expression is significantly increased, and keratinocytes are the major target cells of TGF-β1 [3]. In vitro, the effects of TGF-β signaling are paradoxical: keratinocyte migration is enhanced whereas keratinocyte proliferation is inhibited [4]. Genetic ablation of TGF-β1, its receptors and its downstream mediators, Smads, have been reported to either reduce or enhance the rate of wound repair [5-7]. Therefore, identifying the downstream effectors of TGF-β signaling involved in this process was pivotal for better understanding of the molecular mechanism underlying the cellular response to TGF-β signaling during wound healing.

miR-21, the most frequently upregulated miRNA in human cancers and other diseases, plays important roles in cell proliferation, differentiation, apoptosis, epithelial to mesenchymal transition (EMT) and migration through its distinct targets [11-13]. For instance, miR-21 promotes migration in glioma cell by targeting RECK and TIMP3 [11], and in colon cancer cell by targeting TIAM1 [12]. Previous studies have shown that miR-21 is highly expressed in epidermis and hair follicle [14], and is aberrantly elevated in psoriatic epidermis [15]. However, the function of miR-21 in keratinocyte and cutaneous wound healing is still underdetermined.

In the current study, we revealed an important role of miR-21 in keratinocyte migration as well as during wound healing.

Previous studies have shown that TGF-β1 promotes expression of mature miR-21 through post-transcriptional mechanism in human vascular smooth muscle cell and colon cancer cell [12, 16]. To determine whether TGF-β1 could regulated miR-21 expression in keratinocyte, HaCaT, a human keratinocyte cell line, was treated with TGF-β1. miR-21 expression was dramatically increased at 6 hours after TGF-β1 treatment (Figure 1A). Previous studies have revealed that miR-21 plays important roles in regulating cell proliferation in various cell types [13]. However, overexpression or knockdown of miR-21 did not affect the proliferation of HaCaT cell (Figure 1B and Supplementary Material: Figure S1).

Previous studies have identified some targets of miR-21 responsible for cell migration [11-12, 18]. Tissue inhibitor of metalloproteinase-3 (TIMP3) is capable of inhibiting migration in glioma cell and in breast cancer cell [11, 18], and is downregulated during wound healing [19] and in psoriatic epidermis [20]. We determined TIMP3 expression in HaCaT cells transfected with miR-21 mimic or scrambled-miRNA. Real-time PCR results revealed that TIMP3 was markedly reduced by 38% in miR-21-tansfected HaCaT cells compared with that in scrambled-miRNA-transfected control cells (Figure 1E, P<0.01). To further determine whether miR-21 could directly regulate TIMP3, full length of TIMP3 mRNA 3'UTR was inserted to the downstream of luciferase open reading frame in pGL3-CM reporter vector. When introduced into HaCaT cells, the TIMP3 3'UTR reporter showed a 60% reduction in luciferase activity in the miR-21-transfected cells compared with that in scrambled-miRNA-transfected cells (Figure 1F, P<0.01). Previous evidence revealed that TIAM1 (T-lymphoma invasion and metastasis inducing protein), a direct target of miR-21, is required for miR-21 to enhance migration and invasion in colon cancer cell [12]. Real-time PCR results confirmed that miR-21 overexpression with mimic caused a 25% reduction of TIAM1 expression in HaCaT cell (Figure 1G, P<0.01). The above data implied that TIMP3 and TIAM1 might be responsible for miR-21-promoted keratinocyte migration.

To investigate the function of miR-21 in vivo, we examined miR-21 expression during wound healing by Northern blot. 4-mm full-thickness punch-biopsy wounds were made on the back of mice. Coincident with the temporal upregulation of TGF-β1, miR-21 expression at wound edge showed 2.8-3.9 fold increases after injury (Figure 2A). To investigate the functional consequences of miR-21 upregulation at wound edge, we downregulated endogenous miR-21 expression by administering Pluonic gel containing miR-21 AS to wounded skin. Northern blot result showed that miR-21 was effectively decreased by 44% at wound edge treated with miR-21 AS compared with that with scrambled AS 3 days after injury (Figure 2B). 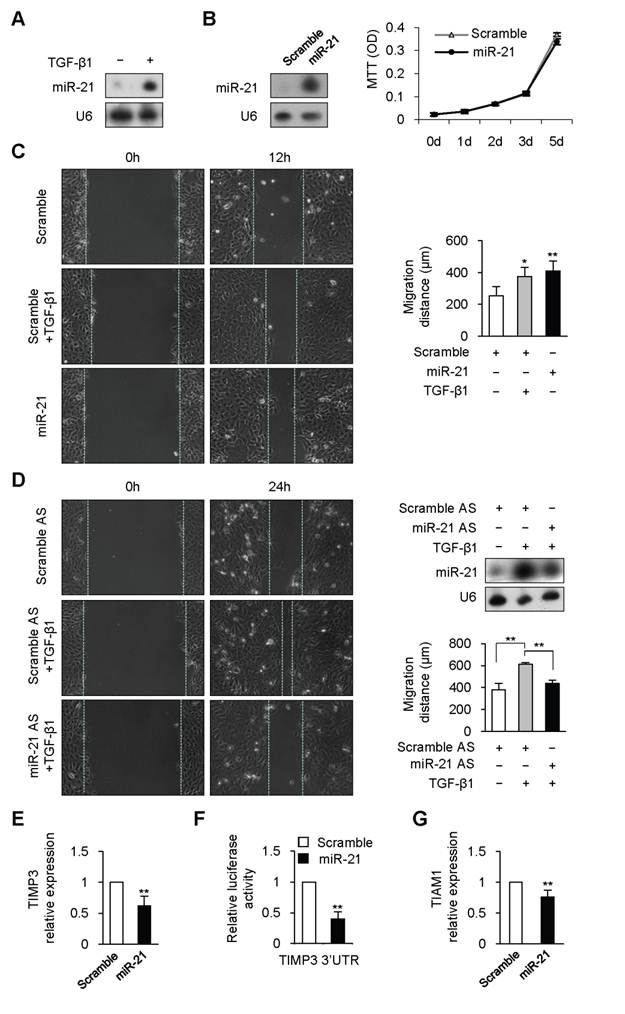 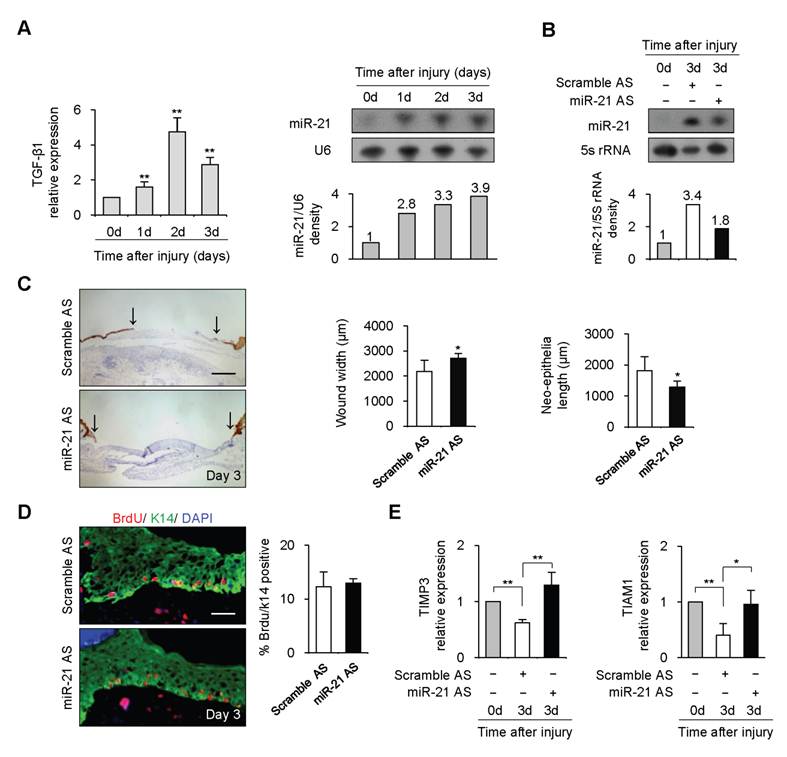 Wounds were immunostained with Keratin 14 antibody for examination of re-epithelialization. We observed that the wound widths were larger and neo-epithelial lengths were shorter in healing skin treated with miR-21 AS compared with controls 3 days after injury (Figure 2C, n=5, P<0.05), indicating that knockdown of endogenous miR-21 impaired re-epithelialization. Consistent with the effect of miR-21 on keratinocyte proliferation in vitro, we found that miR-21 downregulation did not affect keratinocyte proliferation at wound edge by BrdU incorporation assay (Figure 2D), suggesting that the delayed re-epithelialization caused by miR-21 downregulation was possibly due to the reduced keratinocyte migration. In addition, we found expression levels of TIMP3 and TIAM1 were decreased at control wound edge, but not at wound edge treated with miR-21 AS (Figure 2E, P<0.05), indicating that miR-21 promoted keratinocyte migration possibly via inhibiting the expression of TIMP3 and TIAM1 in re-epithelialization process.

Overall, our data revealed that miR-21 was indispensable for TGF-β-driven keratinocyte migration in vitro and could promote re-epithelialization during wound healing in mice.

4. Räsänen K, Vaheri A. TGF-beta1 causes epithelial-mesenchymal transition in HaCaT derivatives, but induces expression of COX-2 and migration only in benign, not in malignant keratinocytes. J Dermatol Sci. 2010;58(2):97-104