Cestodes (Cestoda, Platyhelminthes) are a highly diversified group of parasites, and the majority of cestodes can cause serious diseases in humans and animals globally, such as dipylidiasis, hydatidosis, cysticercosis, diphyllobothriasis and sparganosis [1]. Human sparganosis is a neglected parasitic disease caused by the plerocercoid larvae (spargana) of members of the genus Spirometra [2]. Spirometra erinaceieuropaei and S. mansonoides are responsible for sparganosis in Asia and Americas, respectively [3].

Mitochondrial DNA (mtDNA) sequences have provided genetic markers for addressing questions in systematics and population genetics of Spirometra cestodes. A recent study showed that mtDNA cox1 sequences are useful genetic markers for the identification of species within Spirometra [4]. Employing mtDNA cox1 gene sequences, a previous study demonstrated that S. erinaceieuropaei and S. proliferum are distinct species [5]. Although the single gene or single region of mtDNA have been considered as useful molecular markers, the complete mt genome sequences have significantly improved the power and resolution of phylogenetic analysis compared with single gene or single region of mtDNA [6-8]. Additionally, the complete mt genome sequences allow for more accurate resolution of taxonomic relationships even at deep levels than single gene or single region of mtDNA [9].

Metazoan mitochondrial (mt) genomes contain 36-37 genes, including 12-13 protein-coding genes (PCGs), two ribosomal RNAs (rRNA) genes and 22 transfer RNAs (tRNA) genes necessary for translation of the proteins encoded by mt DNA (mtDNA) [10]. mtDNA sequences have been widely used as genetic markers not only for studies of population or ecological genetics, but also for phylogenetic and evolutionary analyses due to its maternal inheritance, rapid evolutionary rate, lack of recombination, and relatively conserved genome structures [11-15]. Although Cestoda is a large animal class, to date the complete mt genomes of only 19 species have been sequenced and deposited in GenBank. In particular, in the order Pseudophyllidea, the complete mt genomes of only three species have been reported, namely Diphyllobothrium latum and D. nihonkaiense [4], and S. erinaceieuropaei from Japan (GenBank accession No. NC_011037). The mt genome of S. erinaceieuropaei from a snake in Japan has been sequenced, but S. erinaceieuropaei isolated from different hosts and different geographic origins may have some differences because a previous study indicated that mt genomes for N. americanus from two endemic regions showed substantial sequence variation [16]. Moreover, the mt genome of S. erinaceieuropaei from Japan has not been characterized yet.

An adult cestode representing S. erinaceieuropaei was obtained from the small intestine of an infected farmed dog at a slaughterhouse in Zhanjiang, Guangdong province, China. The cestode was washed in physiological saline, identified preliminarily to species based on host preference, morphological characters and predilection sites [17], fixed in 70% (v/v) ethanol and stored at -20°C until use.

Amplification and sequencing of partial cox3, nad4, cox1 and rrnS

Mitochondrial genome organization of Spirometra erinaceieuropaei from China and Japan.

The obtained partial cox1, cox3, nad4 and rrnS sequences were compared with the corresponding sequences of S. erinaceieuropaei mt genome (Japan isolate, NC_011037) using the program Clustal X 1.83 [20], and then primers (Table 1) were designed in the conserved regions to amplify the complete mt genome of S. erinaceieuropaei (China isolate). Long-PCR reactions (25 μl) were performed in 2 mM MgCl2, 0.2 mM each of dNTPs, 2.5 μl 10× rTaq buffer, 2.5 μM of each primer, 1.25 U rTaq polymerase (Takara), and 1 μl of DNA sample in a thermocycler (Biometra) under the following conditions: 92 °C for 2 min (initial denaturation), then 92 °C for 10 s (denaturation), 50 °C or 55 °C for 30 s (annealing), and 60 °C for 10 min (extension) for 10 cycles, followed by 92 °C for 10 s, 50 °C or 55 °C for 30 s, and 60 °C for 10 min for 20 cycles, with a cycle elongation of 10 s for each cycle and a final extension at 60 °C for 10 min. Samples not containing DNA (no-DNA controls) were included in each amplification run, and in neither case were amplicons detected in the no-DNA controls (data not shown). Each amplicon (5 µL) was examined by agarose (1%) gel electrophoresis, stained with ethidium bromide and photographed using a gel documentation system (UVItec). PCR products were sent to Sangon Company (Shanghai, China) for sequencing from both directions using a primer walking strategy.

Phylogenetic relationships among 19 cestode species were reconstructed using Ascaris suum (GenBank accession No. HQ704901), an ascaridoid nematode, as the outgroup, based on amino acid sequences of 12 PCGs. Each gene was translated into amino acid sequence using the invertebrate mitochondrial genetic code in MEGA 5.0 [24] , and aligned on the basis of its amino acid sequence, using default settings, and ambiguously aligned regions were excluded using the Gblocks online server [25] (http://molevol.cmima.csic.es/castresana/Gblocks_server.html) using the options for a less stringent selection. The final amino acid sequences of the 12 PCGs were then concatenated into single alignments for phylogenetic analyses.

Arrangement of the mitochondrial genome of Spirometra erinaceieuropaei (China isolate). Gene scaling is only approximate. All genes are coded by the same DNA strand and are transcribed clockwise. All genes have standard nomenclature except for the 22 tRNA genes, which are designated by the one-letter code for the corresponding amino acid, with numerals differentiating each of the two leucine- and serine-specifying tRNA (L1 and L2 for codon families CUN and UUR, respectively; S1 and S2 for codon families AGN and UCN, respectively). ''NR'' refers to a small noncoding region. ''NC'' refers to a large noncoding region. 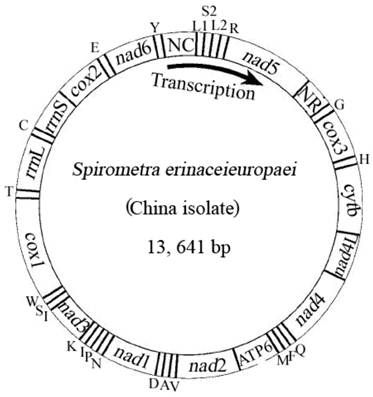 The sizes of 22 tRNA genes identified in the mt genome of S. erinaceieuropaei (China isolate) ranged from 57 to 69 nucleotides (nt) with differences in stem and loop sizes of dihydrouridine (D) and TCC arms. Their putative secondary structures (not shown) are similar to those of other Pseudophyllidea cestodes [4], indicating their similar functions.

Levels of variability in mtDNAs among Pseudophyllidea cestodes

Sliding window analysis of the complete nucleotide alignment of 4 available Pseudophyllidea cestode mtDNAs provided an indication of nucleotide diversity Pi (π) within and between mt genes (Fig. 2). In the curve, the nucleotide variation within and between mt genes among the aligned Pseudophyllidea cestode mt genomes was intuitively displayed for any given window of 300 bp and steps of 10 bp, with the π ranging from 0.055 to 0.297. Coupled with computation of the number of variable positions per unit length of gene, the sliding window indicated that the PCGs with high sequence variability included nad6 (0.372), nad5 (0.37), nad2 (0.331), atp6 (0.316), nad3 (0.31) and nad4 (0.3), while the genes with low sequence variability included cox3 (0.299), cytb (0.263), nad4L (0.257), nad1 (0.251), cox1 (0.21) and cox2 (0.195). In this study, the cox2 and cox1 genes are the most conserved PCGs, and nad6 and nad5 are the least conserved PCGs. Given the lowest and the highest sequence variability, cox2 (0.195) and nad6 (0.372) can be considered as the best markers in future studies of phylogenetics, population genetics and diagnostics of the Pseudophyllidea cestodes. Obviously, these genes are also more variable than the cox1 gene in the present study (0.21 for cox1), not consistent with that of previous studies [33,34]. Currently, mt genes such as cox1 and cytb have been used as targets for PCR-based approaches for the identification and diagnosis of cestodes [35,36]. These results suggest that cox1 gene may not be the most informative or most suitable for all cestode taxa although it has commonly been optioned as molecular markers. Our resultes indicated that sliding window analyses could define genetic markers for population genetics and systematics studies of cestodes.

Nucleotide variation in mtDNA sequences between S. erinaceieuropaei from China and Japan

Sliding window analysis of the nucleotide alignment of S. erinaceieuropaei mtDNA from China and Japan provided an indication of nucleotide diversity (π) within or between mt genes (Fig. 3). The plot readily shows the high degree of nucleotide variation within or between genes amongst the aligned S. erinaceieuropaei genomes for any given window of 300 bp (π) ranges from 0 to 0.043). Sliding window analysis indicates that genes with high sequence variability included cytb (0.023), nad4 (0.022) and cox1 (0.012). Genes with no sequence variability include nad1, cox2 and nad6. Based on these results, it seemed that nad1 and cox2 are the most conserved protein-coding genes, and cytb and nad4 show high sequence variability between S. erinaceieuropaei from China and Japan. These results indicated that cytb and nad4 sequences provide alternative new genetic markers for population genetic studies of S. erinaceieuropaei from different hosts and different geographic origins.

Phylogenetic analyses of cestodes using two methods (BI and ML) yielded identical tree topologies based on concatenated amino acid sequences of 12 protein genes, all revealed distinct groups with high statistical support, and demonstrated that S. erinaceieuropaei is closely related to Diphyllobothrium spp. (Fig. 4), consistent with that of a previous study using cox1 sequences [37], supporting classification based on morphological features [38]. In this tree, Cyclophyllidea and Pseudophyllidea form monophyletic groups. Within the Cyclophyllidea clade, Hymenolepididae and Taeniidae form monophyletic groups. Within the Cyclophyllidea clade, Echinococcus and Taenia are sister genera.

In conclusion, the present study determined and characterized the complete mtDNA sequence of S. erinaceieuropaei from China, which is slightly shorter (2 bp) than that of S. erinaceieuropaei from Japan, and both mt genomes differed by 0.9% only, refuted our hypothesis. These mtDNA sequences should provide novel genetic data for addressing further questions in systematics and population genetics of these and other related cestodes of socio-economic significance.­­

Sliding window analysis of the alignment of complete mtDNAs of Spirometra erinaceieuropaei from China and Japan. The black line shows the value of nucleotide diversity Pi (π) in a sliding window analysis of window size 300 bp with step size 10, and the value is inserted at its mid-point. Gene boundaries are indicated with a variation ratio per gene. 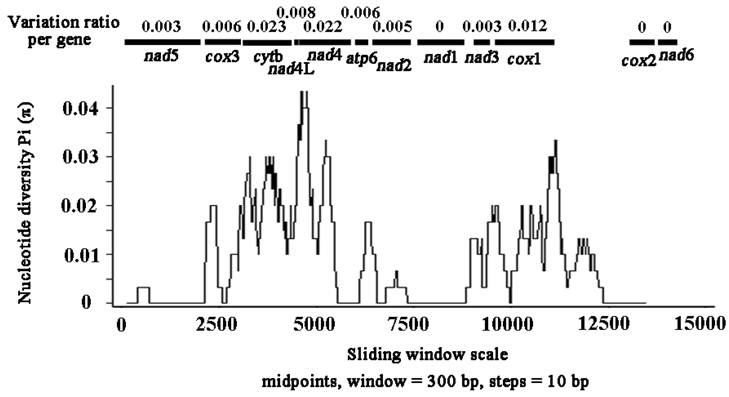