The cytotoxic T lymphocyte antigen-4 (CTLA4) gene is a key negative regulator of the T lymphocyte immune response. It has been found that CTLA4 +49A>G (rs231775), +6230G>A (rs3087243), and 11430G>A (rs11571319) polymorphisms are associated with susceptibility to many autoimmune diseases, and can down-regulate the inhibition of cellular immune response of CTLA4. Three SNPs in CTLA4 were genotyped by using the PCR and DNA sequencing methods in order to reveal the susceptibility and pathology correlation to pulmonary tuberculosis in Southern Han Chinese. We found that the frequency of CTLA4 +49AG genotype in the pulmonary tuberculosis patients (38.42%) was significantly lower than that of the healthy controls (49.77%), (Pcor=0.038, OR 0.653, 95% CI 0.436-0.978). But, no associations were found between the other 2 SNPs (+6230G>A, 11430G>A) and tuberculosis (P>0.05). Haplotype analysis showed that the frequency of haplotype AGG in the healthy controls group (6.9%) was significantly higher than the pulmonary tuberculosis patients group (1.4%), (global P=0.005, Pcor=0.0002, OR 0.183, 95% CI 0.072-0.468). In addition, haplotype GGA was found to be significantly related to tuberculosis with double lung lesion rather than single lung lesion (Pcor=0.042). This study is the first to report that genetic variants in the CTLA4 gene can be associated with pulmonary tuberculosis in Southern Han Chinese, and CTLA4 +49AG genotype as well as haplotype AGG may reduce the risk of being infected with pulmonary tuberculosis. The GGA haplotype was related to tuberculosis with double lung lesion, which provides a new experimental basis to clarify the pathogenesis of pulmonary tuberculosis.

Tuberculosis (TB) is the leading cause of death among infectious diseases [1, 2]. Although about one third of the world's population is thought to be infected with Mycobacterium tuberculosis (MTB), only 5-15% of people develop clinically active TB during their lifetime [3]. This indicates that genetic differences between individuals play an important role in susceptibility to TB. Cumulative evidence suggests that different susceptibility genes can lead to inconsistent incidence rate of TB in ethnic groups [4]. Our previous findings also suggest that both genetic and environmental factors are associated with the pathogenesis of TB [5-7].

Cellular immune response and delayed-type hypersensitivity reactions are considered to play a major role in the immunopathogenesis of pulmonary TB [8]. T cell activation requires two signals: one signal triggered by MHC-peptide complex and another from CD28 on the T cell's surface binding to the B7 molecules on the antigen presenting cell (APC). The cytotoxic T lymphocyte associated antigen 4 (CTLA4) is a CD28-family receptor, which inhibits T cell proliferation through combination with B7 molecules [9]. Human CTLA4 gene is located on chromosome 2q33, and the single-nucleotide polymorphism (SNP) +49A>G (rs231775) is located in the first exon of the CTLA4 gene. A +49A>G base substitution can lead to threonine to alanine amino acid change in the coding region of CTLA4 [10]. The CTLA4 +6230 (rs3087243) and CTLA4 +49 SNPs have been shown to be in strong linkage disequilibrium, resulting in excellent combinations of haplotype analysis [11, 12]. Previous studies have demonstrated that the +49 SNP of the CTLA4 is related to the development of Graves' disease [13], systemic lupus erythematosus [14] and other autoimmunity diseases, while CTLA4 +6230 SNP have been shown to be associated with susceptibility to Hepatitis B virus infection [15] and inflammatory bowel disease [16]. Thye et al. [17] found that the CTLA4 +6230G allele contributes to pathology of TB in the African population. However, no previous study has investigated whether polymorphic sites in CTLA4 correlate with the development of pulmonary TB in Southern Han Chinese.

The aim of the present study was to investigate the occurrence of CTLA4 SNPs and their association with susceptibility to pulmonary TB in Southern Han Chinese. The patients were divided into single lung lesion and double lung lesion groups in order to reveal the correlation between CTLA4 SNPs and the severity of lung damage, and to clarify the role of CTLA4 in the pathogenesis of pulmonary TB.

A total of 274 Southern Han Chinese subjects with pulmonary TB, aged 18-70 years (mean age 39.5 ± 16.3 years) were recruited from the Sixth Hospital of Shaoxing (133 subjects) and Hangzhou Red Cross Hospital (141 subjects). The control group comprised 266 healthy subjects, aged 20-62 years (mean age 36.3 ± 10.9 years), unrelated blood donors with no history of TB or other immune diseases. Females constituted 41.2% of the pulmonary TB patients, and 40.6% of healthy controls (Table 1). CTLA4 +49 SNP consisted of 203 TB patients and 221 healthy controls from above, while CTLA4 +6230 and 11430 SNPs consisted of 264 TB patients and 262 healthy controls. This study was approved by the Ethics Committee of the Faculty of Medicine (Zhejiang University, China), and informed consents were obtained from all subjects before blood sampling. 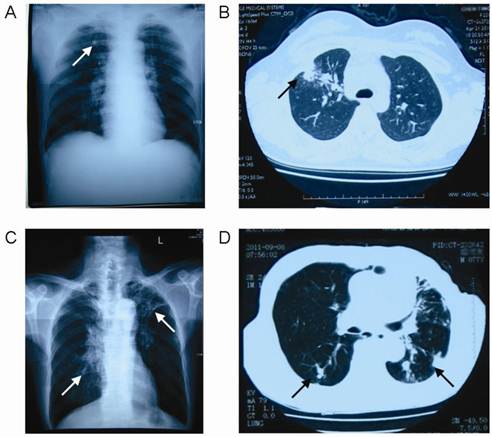 Hardy-Weinberg equilibrium was assessed by using the chi-square test for each group. The chi-square test was used to compare allele and genotype distribution in the TB patients and healthy controls by the GraphPad Prism version 5.01 software, while n<5, a correction of the two-tailed Fisher exact method was used. Odds ratios (OR) and 95% confidence intervals (CI) were calculated by Miettinen method. A P value of <0.05 was considered to be statistically significant. Haplotype frequencies and associations were calculated by Haploview version 4.2, which uses the expectation-maximization algorithm. Pairwise linkage disequilibrium was estimated by calculating pairwise D' and r2.

Corrections for multiple testing of single variants were made by False Discovery Rate (FDR) correction. The statistical analyses were performed using the R computer package software (version 2.13.0) for global and haplotype-specific P values. The study sample provided 75% power to identify significant genotypic differences between TB cases and controls at a statistical support level of α=0.05 with an OR of 1.4 and a minor allele frequency of 0.1 applying a multiplicative model. 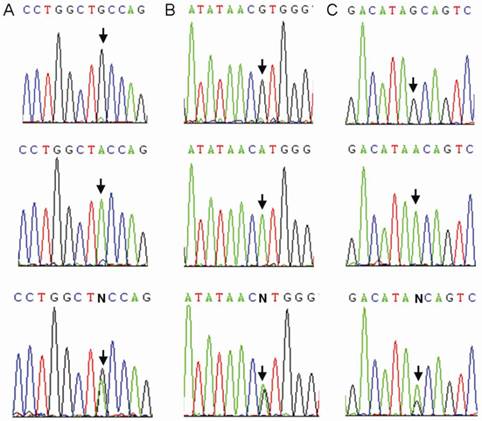 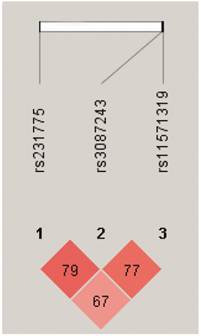 1P values obtained testing an overall association between haplotypes and the phenotype.

2 Adjusted for age and sex.

1P values obtained testing an overall association between haplotypes and the phenotype.

2 Adjusted for age and sex.

TB is an infectious disease caused by MTB. The adaptive immune system plays an important role in susceptibility to TB [8]. Besen et al. [19] compared the clinical, radiological, and laboratory characteristics of individuals with pulmonary TB co-infected or not with HIV and confirmed the importance of T lymphocyte in the immunopathogenesis of pulmonary TB. Our experiments indicate that CTLA4 SNPs are associated with pathological lung injury and susceptibility to pulmonary TB.

Different gene polymorphisms can lead to different incidence of pulmonary TB in different ethnic groups [4]. According to the NCBI database (dbSNP), the frequencies for the CTLA4 +49AG in Asians (36.5%) and Sub-Saharan Africans (47.8%) were lower than the European population (58.3%). Since China, India and Africa have a higher incidence of TB, we speculated that the CTLA4 +49AG is negatively correlated with susceptibility to pulmonary TB. Our results suggest that in the Southern Chinese Han population, the frequency of CTLA4 +49AG in TB patients (38.42%) was significantly lower than the control subjects (49.77%), and there was a negative correlation with susceptibility to TB (Pcor=0.038, OR 0.653, 95% CI 0.436-0.978) (Table 3). These findings confirmed our speculation. CTLA4 +49 A>G caused an amino acid change at position 17 in exon 1 from threonine to alanine, leading to affinity differences between CTLA4 and B7. Ligers et al. [20] and Sun et al. [21] indicated that +49A>G polymorphism causes decreased CTLA4 molecule production resulting in lower surface expression and lower affinity of CTLA4 for B7-1 molecule, which leads to a lower inhibition of T lymphocyte activity and a higher inhibition of the development of many tumors. Walldén et al. [22] found that CTLA4 polymorphisms were associated with increased secretion of cytokines such as, IFN-gamma and IL2, and end up with enhanced immune response. Therefore, we proposed that after the population carrying the CTLA4 49AG genotype is infected with MTB, the CTLA4-mediated inhibition of T lymphocytes is reduced, resulting in the enhancement of T lymphocyte response for the removal of pathogens and protection against pulmonary TB.

There were no significant differences between TB patients and healthy controls in allele or genotype frequencies of CTLA4 +6230 and 11430. However, in a Norwegian case-control study, Zhu et al. [23] found that +49A as well as +6230G polymorphisms are protective factors of chronic obstructive pulmonary disease (COPD). Thye et al. [17] demonstrated that in an African population, +6230G contributed to pathology rather than to protection in pulmonary TB. Furthermore, in our data, there were also no significant differences in all 3 SNPs' allele frequencies and genotype frequencies between single lung lesion group and double lung lesion group. However, a study in an African population [17] showed a significant influence of the +6230G variant on the disease severity as radiographically assessed by the extent of opacities and size and number of pulmonary cavities. The +6230G had been found to be associated with severe pathology in pulmonary TB. These inconsistent results may reflect the heterogeneity of case-control association studies in different ethnic populations. This has been confirmed by Delgado et al. [4] ethnic-specific genetic studies of pulmonary TB and our previous studies [5-7]. It is noteworthy that the frequency distribution of these SNPs was not same in all races. The polymorphisms such as, +49A and +6230A were much higher in the European population than the Asian and African populations. This difference, along with gene-gene interactions and environmental and cultural factors, and even the variations in mycobacterium strains, are making the understanding of the observed differences between ethnic groups even more complicated.

In our haplotype analysis, the frequency of AGG haplotype was significantly higher in the healthy controls compared to the TB patients (global P=0.005, Pcor=0.0002, OR 0.183, 95% CI 0.072-0.468) (Table 6). Ueda et al. [24] found that the change in +6230A>G enabled decreased mRNA level of soluble CTLA4, thus affecting its combination with B7 molecules and resulting in the decreased inhibition of T cell activation. Although, this change has been challenged in a recent study [25], but still some studies indicate that +6230GG polymorphism in a population significantly decrease soluble CTLA4 levels in peripheral blood [26]. Therefore, we speculate that there is a functional decline in the inhibition of T cell activation in the AGG haplotype group, leading to a stronger T cell immune response.

We found that the frequency of haplotype GGA in the double lung lesion group was higher than the single lung lesion group (Pcor=0.042) (Table 7). Thye et al. [17] suggested that haplotype -1765A/-1722A/-1661A/-443T/+49G/+923C/+6230G is associated with the severity of opacities and cavities in the lung. As the radiological findings of the lung lesions including, opacities and cavities are considered to result from cellular infiltration and necrosis [27], our observations suggest that a reduced activity of CTLA4 causes an increased cellular infiltration of the lung, which may lead to more serious lung lesions. This is in agreement with the concept that pathology of pulmonary TB to some extent is immune mediated. Considered all, together, two kinds of CTLA4 polymorphisms such as, +49G and +6230G can lead to enhanced T cell immune response, but the respective polymorphisms are not associated with the severity of lung lesion. So, we thought that only the presence of +49A>G and +6230A>G polymorphisms together in individuals could significantly enhanced the T cell immune response in pulmonary TB, and cause double lung lesion.

In conclusion, our data suggested that the CTLA4 +49AG is a protective factor to pulmonary TB in Southern Han Chinese. The haplotype AGG was related to healthy controls while, the haplotype GGA was associated with double lung lesion of pulmonary TB. This is the first report that shows an association of CTLA4 gene polymorphisms with TB in the Southern Han Chinese population. It provides a new potential genetic protective factor for pulmonary TB, and shows that +6230 site associated with TB in the African population may not affect the severity of lung damage in the Chinese population.

In the present study, we analyzed alleles, genotypes and haplotypes, and concluded that the +49A>G polymorphism of CTLA4 was associated with pulmonary TB, and may have a protective function. This indicates an important role of T cell activation in the immunopathogenesis of TB.