Methods: Four different phenotypes of CD133+EpCAM+, CD133+EpCAM-, CD133-EpCAM+ and CD133-EpCAM- in Huh7 cells were sorted by flow cytometry. Then cell differentiation, self-renewal, drug-resistance, spheroid formation and the levels of stem cell-related genes were detected to compare the characteristics of TICs. The ability of tumorigenicity was measured in nonobese diabetic/severe combined immunodeficient (NOD/SCID) mice to verify TICs.

Conclusion: CD133+EpCAM+ phenotype is precisely represented TICs in Huh7 cells. It might be useful for studying biology mechanism of TICs in hepatocellular carcinoma and screening new targets for cancer therapy.

Liver cancer in men is the fifth common cancer worldwide [1]. More than 90% of primary liver cancers represent hepatocellular carcinoma (HCC) [2]. Although chemotherapy and transplantation are used in clinic, the mortality of HCC still remains high [1]. It is attributed to recurrence and drug-resistance.

Tumor initiating cells (TICs) hypothesis provides a new insight into the formation of tumors. According to this hypothesis, TICs are considered with stem cell properties: self-renewal, differentiation, resistance and tumorigenicity as original [3]. TICs have been identified in some solid tumors, such as breast [4], brain [5], prostate [6], lung [7], head and neck [8], colon [9], pancreatic [10] cancers and melanoma [11]. More recently, there have been many researches revealed the existence of TICs in HCC. Several surface markers are used including CD133 [12-14], CD90 [15-16], CD44 [17], EpCAM [18-19], CD13 [20], OV6 [21], and ALDH [22]. Cells with different markers possess similar TICs properties, but show great heterogeneity sorted from different laboratories. So until now, there are no generally accepted TICs markers in HCC.

CD133, a 5-transmembrane domain glycoprotein, expresses in normal [23] and tumor tissues. The function of CD133 is not entirely known yet, however it has been used as a marker of TICs in many solid tumors, including liver cancer [12-14]. Differential expression of CD133 in several HCC cells is confused. Thus, CD133 alone is not sufficient to detect TICs in HCC [24]. Recently, EpCAM has been identified as a potential marker of TICs in HCC. CD133 or EpCAM has been used as a surface marker of Huh7 TICs separately [13, 18]. However, EpCAM highly co-expresses with CD133 in Huh7 cells [18].

Therefore, we hypothesized that cells expressing with both EpCAM and CD133 surface marker were more representative for TICs in Huh7 cells. In this study, CD133+EpCAM+, CD133+EpCAM-, CD133-EpCAM+ and CD133-EpCAM- phenotypes in Huh7 cells were sorted to compare the characteristics of TICs. In vitro, colony ability, differentiation potential, resistance, spheroid assay and stem cell-related genes expression were measured by cell culture. Furthermore, the ability of tumorigenicity in vivo was detected in NOD/SCID mice.

Pathogen-free NOD/SCID female mice aged 5-6 weeks were purchased from the Animal Institute of the Chinese Academy of Medical Science (CAMS). These animals were housed in pathogen-free conditions and provided food and water at the Institute of Medicinal Biotechnology of CAMS facility. All animal studies were approved by the animal ethical committee of CAMS. This study was carried out in strict accordance with the recommendations in the Guide for the Care and Use of Laboratory Animals of CAMS (Permit Number: SYXK (Jing) 2007-0013).

Cells were suspended at 1×106 cells/mL in DMEM medium with 2% fetal calf serum and 10 mM Hepes. These cells were incubated at 37℃ for 120 min with 5 μg/mL Hoechst 33342 (Sigma, USA) with intermittent mixing, either alone or in the presence of 50 μM verapamil (Sigma, USA). After incubation, cells were washed by PBS solution supplemented with 2% fetal calf serum and 10 mM Hepes. Then cells were incubated with appropriate concentration of anti-human CD133-PE and anti-human EpCAM-APC as mentioned in flow cytometry analysis. Cells analysis and purification were performed on FACS Aria II (BD Biosciences, CA). The expression of CD133 and EpCAM were detected in enriched side population (SP) and non-side population (Non-SP) cells.

Sorted cells were seeded at a density of 5,000 cells per well in 6-well plates and cultured for 14-21 days. Cells were fed with new culture medium every 3 days. Primary colonies were trypsinized into single cell and counted, and then cells were replanted and cultured under the same conditions. In the end, cells were stained with hematoxylin (Beyotime, China), photographed by ImageQuant gel imager (GE, UK) and counted.

After four sorted phenotypes were incubated for 48 h, IC50 concentration of 5-fluorouracil (5-FU) or doxorubicin (DOX) (Sigma, USA) was added. Then cells were incubated for an additional 48 h. Cell viability was determined by SRB cell proliferation assay as previous described [28].

Freshly sorted cells were collected in sterile DMEM without FBS. 200 μL cell suspension, mixed with matrigel (BD Biosciences, CA) (1:1), was subcutaneously injected into each NOD/SCID mouse. CD133+EpCAM+ and CD133-EpCAM- cells were injected into two opposite sites of same mouse, while CD133+EpCAM- and CD133-EpCAM+ cells were injected into same mouse. The incidence of tumors was examined bi-weekly. After anaesthesia with chloral hydrate, mice were killed at 90 days after injection. The tumors were fixed with 4% paraformaldehyde and stained with hematoxylin-eosin (H&E).

Differential expression of CD133 and EpCAM in HCC cells

Preferential expression of CD133 and EpCAM in SP cells

SP cells are considered as TIC in HCC [30]. SP and non-SP cells were enriched to investigate the expression of CD133 and EpCAM by flow cytometry analysis. SP cells were 1% in Huh7 cells, which were obviously diminished in the presence of verapamil, a calcium channel blocker. The number of cells co-expressed with CD133 and EpCAM was 13-flod in SP cells compared with non-SP cells (Fig. 2B). The results suggested that CD133+EpCAM+ cells might preferential display the SP characteristics. 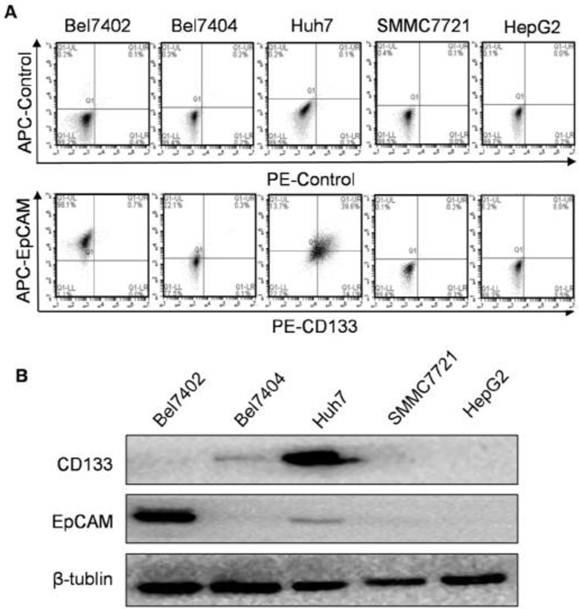 Expression of CD133 and EpCAM in normal and SP Huh7 cells. A. In immunofluorescence analysis, Huh7 cells were stained with anti-CD133 (red) and anti-EpCAM (green) antibodies. Nuclei (blue) are labeled with Hoechst 33358 dye. B. SP cells were identified as the poorly staining cell population (black triangle P2) that largely disappeared when verapamil was used. Then expression of CD133 and EpCAM were detected by flow cytometry in enriched SP and non-SP cells. SP, side population. 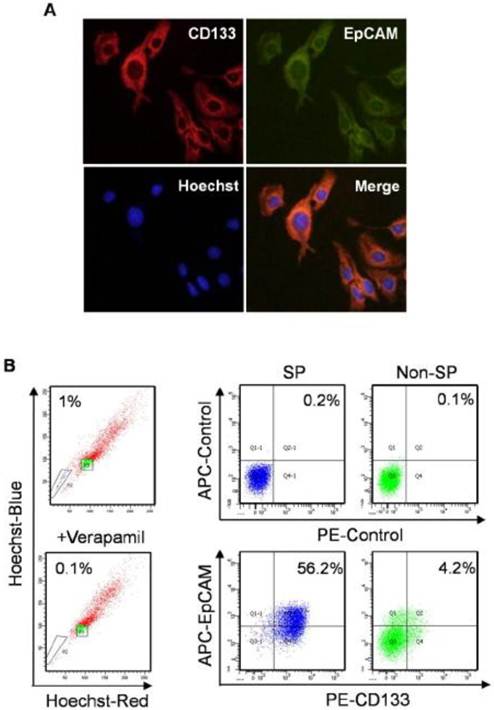 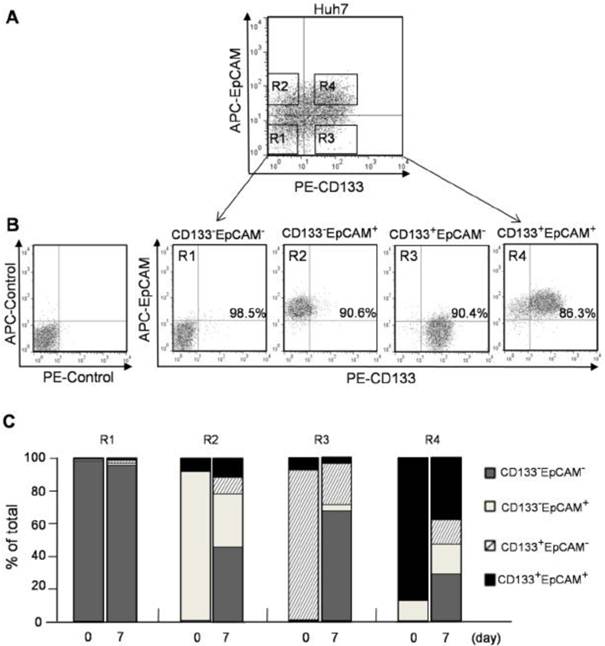 Colony formation ability was increased in CD133+EpCAM+ Huh7 cells. A. In plate colony formation assay, various phenotypes were cultured for 14-21 days, and then the primary colonies were replanted for another 14-21 days. Each experiment was performed three times. B. In soft agar colony formation assay, various phenotypes were planted on soft agar and cultured for 8-10 days. The stained colonies were photographed, and measured by the fluorescence reader. Data were from triple separate experiments. *P<0.05 to CD133-EpCAM-, †P<0.05 to CD133-EpCAM+, #P<0.05 to CD133+EpCAM-. 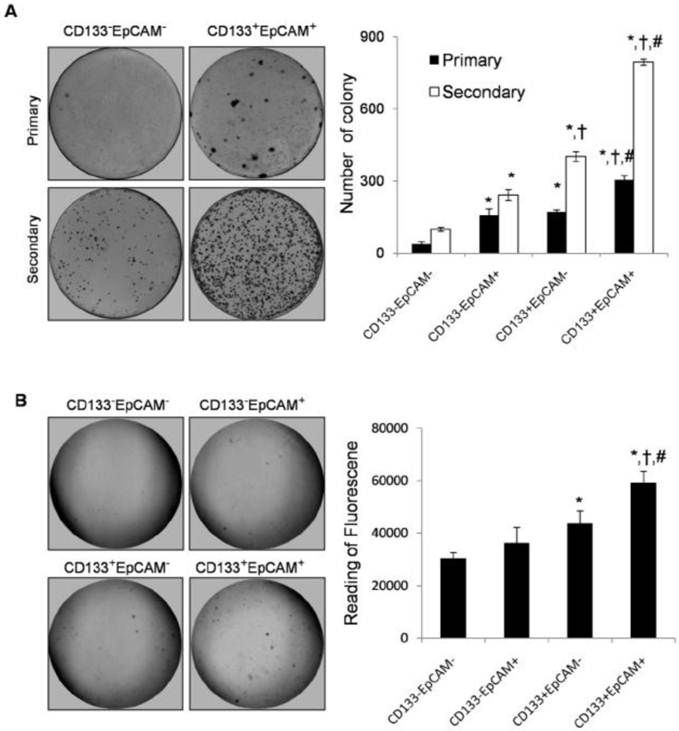 Augmentation of proliferation and drug-resistance in CD133+EpCAM+ cells

TICs have been enriched in nonadherent spherical clusters of cells in breast, liver and colon cancer cells [38-40]. Four sorted cells were cultured in serum-free medium for 7 days. The results showed that CD133+EpCAM+ cells formed larger, compacter and more spheroids than other three cells (Fig. 5B). 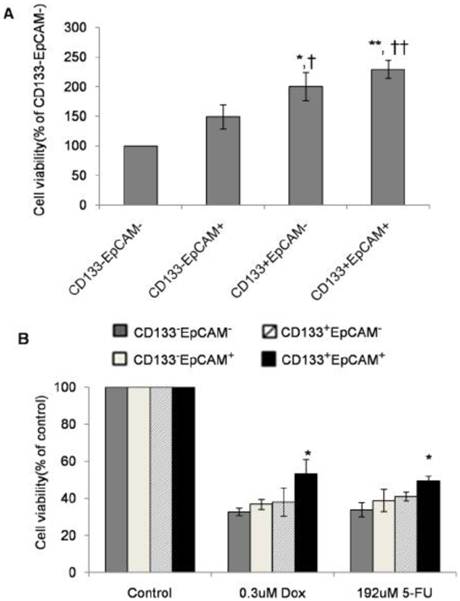 a The number of tumors detected/number of injections.

Because of different experiment methods and cell types in every research group, the confusion results have been found in HCC. Recently, CD90 and CD13 have been used to identify HCC TICs, while CD44 and CD24 are mainly used as breast or pancreatic TICs markers [4, 10, 16, 20]. Using flow cytometry assay, we found the low expression of CD90, CD13 or CD44, and high expression of CD24 in HCC Bel7404, Bel7402, Huh7, SMMC7721 and HepG2 cells (data not shown). Otherwise, EpCAM or CD133 as an efficient marker of TICs has been proved by many researches in HCC, especially in Huh7 cells. Thus, we chose EpCAM and CD133 as the biomarkers of TICs.

In spite of single marker, two markers are combined to identify and isolate TICs precisely. CD133+CD44+ phenotype in SMMC7721, MHCC-LM3, and MHCC-97L cells [17], CD133+ALDH+ phenotype in PLC8024 cells [22], and CD45-CD90+ phenotype isolated from human tumor specimens and blood samples [16] are significantly more tumorigenic both in vitro and in vivo. Using other combination of surface markers, sorted Huh7 cells can not generate tumors in NOD/SCID mice [17]. However, we found that only 500 CD133+EpCAM+ cells formed tumors in NOD/SCID mice, rather than single marker positive cells. It was notable that CD133+EpCAM+ cells also possessed more characteristics of TICs rather than CD133+EpCAM-, CD133-EpCAM+ or CD133-EpCAM- cells in vitro. It suggests that CD133+EpCAM+ are the effective combination of TICs surface markers in Huh7 cells. Furthermore, recent clinic researches have shown that CD133 or EpCAM, associated with recurrence, alone may not be sufficient to serve as prognostic parameter of HCC [24, 41]. It is worthwhile for further investigation of CD133 and EpCAM in clinical significance. 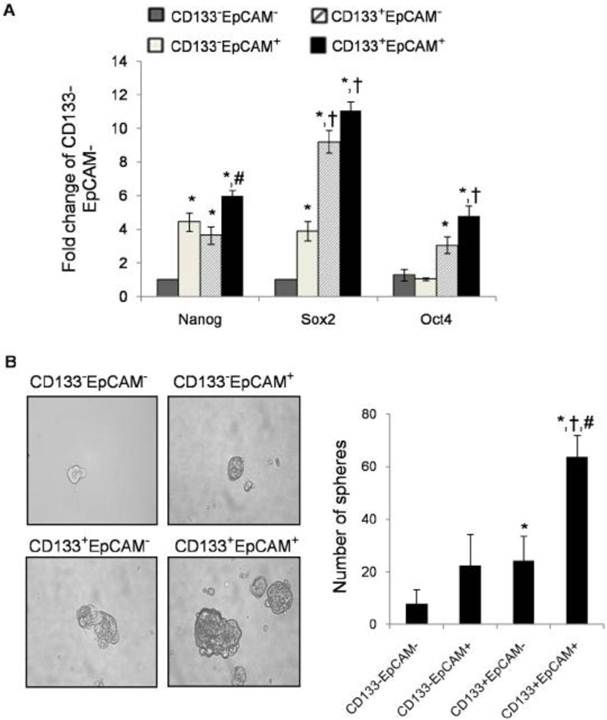 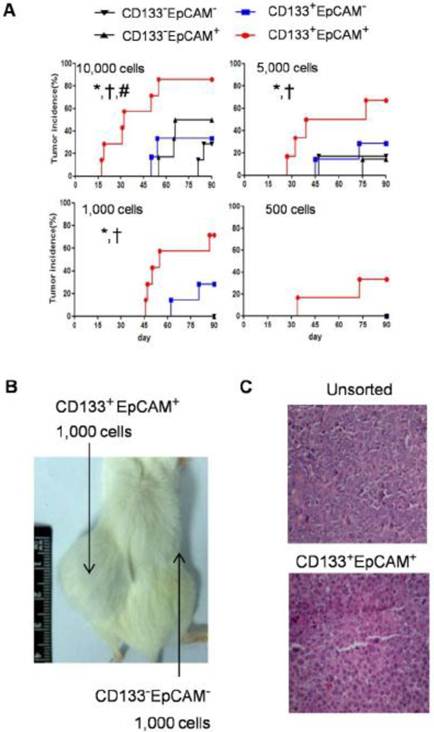 To observe the effects of CD133 or EpCAM, CD133+EpCAM- cells were compared with CD133-EpCAM+ cells in Huh7 cells. Exception of high expression of stem-related genes in CD133+EpCAM-, there was no significant difference between two markers in vitro. In vivo, CD133+EpCAM- cells had been found more tumorigenic potential than CD133-EpCAM+ cells. It suggested that CD133 had more relative characteristics of TICs than EpCAM. Moreover, EpCAM has been proved to be a direct transcriptional target in the Wnt/β-catenin signaling pathway [44]. CD133 has been decreased through the blockade of Notch pathway [45]. It is worthwhile for further study of these signaling pathways on CD133 and EpCAM in Huh7 cells.

Although the high expression of EpCAM in Bel7402 cells, there was no obvious difference between EpCAM+ and EpCAM- cells in vitro, including colony and sphere formation ability (data not shown). Meanwhile the expression of CD133 and EpCAM were low in HepG2 cells, which could not form subcutaneous tumor in ATCC. It was hypothesized that there might be another surface marker in Bel7402 or HepG2 cells with different cellular origin.

After flow cytometry sorting, CD133+EpCAM+ cells differentiated into the other phenotypes in medium with FBS, which was confirmed by other group [18]. Recently, it has been reported that spheroid cells expressed TICs characteristics [38]. Taken together, the combination of multi-marker sorting and the spheres formation might be the better strategy to maintain the TICs characteristics in a restricted period of time. It will be more suitable for studying basic biology of TICs and screening new drug targets.

In conclusion, our data suggest that CD133+EpCAM+ phenotype precisely represented the characteristics of TICs in Huh7 cells, including self-renewal, differentiation, resistance, tumorigenicity. It may promote the basic research on TICs and drug-screening.

Dr. Yi Chen obtained doctor's degree from Peking Union Medical College & Chinese Academy of Medical Sciences in 2012. She was a Ph.D. student under the supervision of Prof. Rong-guang Shao. Her research mainly engages with the identification of TICs in liver cancer and screening of the targeting drugs.