Hepatocellular carcinoma (HCC) as the fifth most common primary malignancy is worldwide increasing incidence (1, 2). Though several anti-cancer drugs have been treated to the HCC patients, it still resulted in side effects such as recurrence and multidrug resistance (3). Recent studies suggest that the potentials of natural products or herbal medicines such as curcumin, resveratrol showed the anti-cancer activities to the HCC (4-8). Furthermore, some herbal composite formula such as Shi-Quan-Bu-Tang, or Xiao-Chai-Hu Tang were administrated to HCC patients (9, 10).

E-cadherin which is located at the basolateral membrane in adherens junctions is a main marker of epithelial cell layers (17). Dysfunction of the adherens junction molecules such as E-cadherin and β-catenin play an important role in process of epithelial mesenchymal transition in development and tumorigenesis (17, 18). Mutation of E-cadherein was observed in highly invasive tumor cells line (19). Thus, in the current study, we for the first time investigated that gallotannin induced apoptosis via suppression of E-cadherin inhibiting invasive effects in Hep G2 hepatocellular carcinoma cells.

G2 or Chang cells at a density of 1×104 cells per well were incubated in the absence or presence of various concentrations of gallotannin for 48 h. For cell viability study, XTT (2,3-Bis-(2-Methoxy-4-Nitro-5-Sulfophenyl)-2H-Tetrazolium-5-Carboxanilide) (Sigma, USA) colorimetric assay was performed using XTT working solution prepared by mixing 1 mL of XTT stock solution (1 mg/mL in phosphate buffered saline (PBS)) with 10 μL of PMS (1.53 mg/mL in PBS). After 48 h treatment of gallotannin, a 50 μL of XTT working solution was added to each well and incubated at 37°C for 2 h. Then Microplate Reader (Sunrise, TECAN, Mannedorf, Switzerland) at 450 nm wavelength was used to measure the optical density (OD).

To measure DNA content, Hep G2 or Chang cells in absence or presence of gallotannin for 48 h were fixed in 75% ethanol at -20°C. The Fixed cells were washed twice with PBS and resuspended in PBS containing RNase A (1 mg/mL). After 1 h incubation at 37°C, and the cells were stained with 400 μL of Propidium Iodide (PI) solution (50 μg/mL stock) at room temperature for 30 min in the dark. Stained cells were analyzed by flow cytometry using FACSCalibur flow cytometer (Becton Dickinson, FranklinLakes, NJ, U.S.A.).

To measure the migratory ability of Hep G2 cells, a wound-healing assay was carried out. The confluent cells in the absence or presence of gallotannin were scratched with a 200 μL pipet tip, followed by washing with PBS. One day later, Hep G2 cells were fixed and stained with Diff-Quick, and photographed under a fluorescence microscope (AXIO observer A1, Zeiss, Germany). The number of migrated cells into the scratched area was counted.

Hep G2 cells at 5 × 104 cells per well pre-incubated in the presence of gallotannin (4 μM) for 20 min at 37 °C were seeded in a Matrigel coated plate for 10 min at 37 °C. After washing with PBS to remove unattached cells, attached cells were fixed in 1% glutaraldehyde in PBS for 20 min followed by staining with 0.02% crystal violet solution for 5 min at room temperature. Randomly chosen fields were photographed under a fluorescence microscope (AXIO observer A1, Zeiss). The attached cells were calculated for cell-cell adhesion percentage.

Gallotannin exerted the cytotoxicity against Hep G2 and Chang hepatocellular carcinoma cells. (A) Structure of gallotannin. (B) Cytotoxicity of gallotannin in Hep G2. Hep G2 cells were treated with various concentrations of gallotannin (0, 2, 4, 8, or 16 μM) for 48 h and XTT assay was used.to find out cytotoxicity and apoptotic morphological changes in gallotannin treated Hep G2 (C) or Chang (D) cells under inverted microscopy at ×200 magnification. 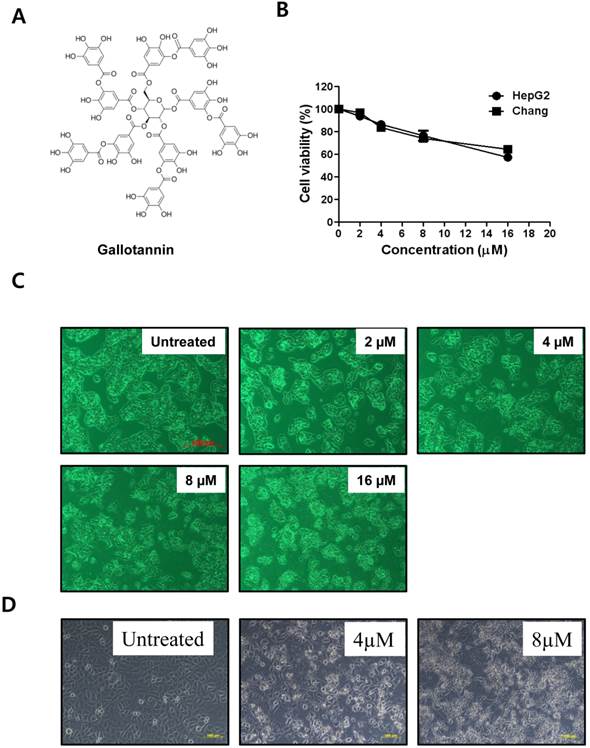 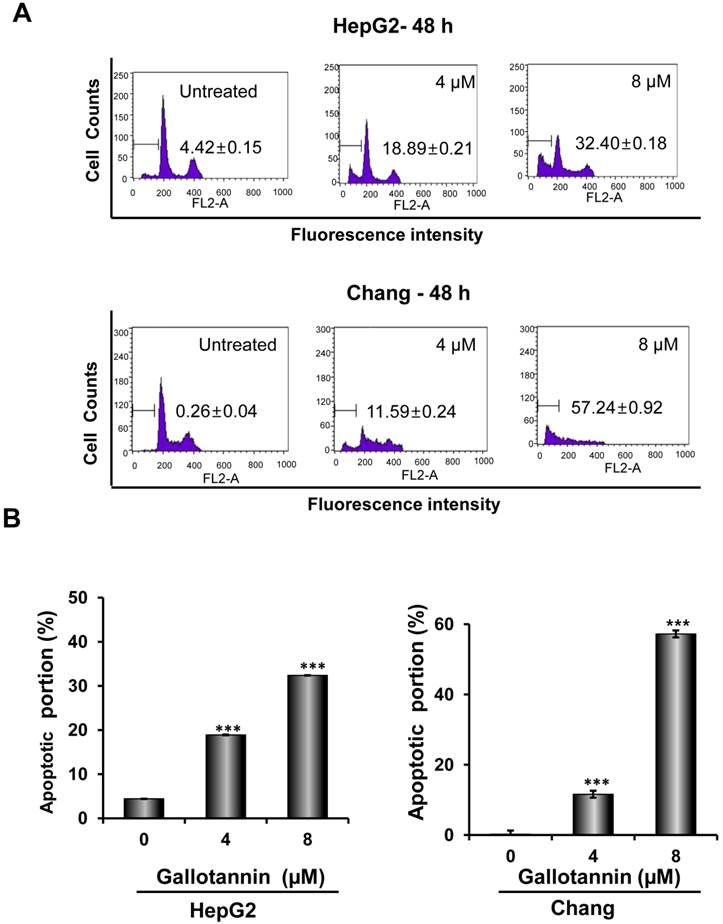 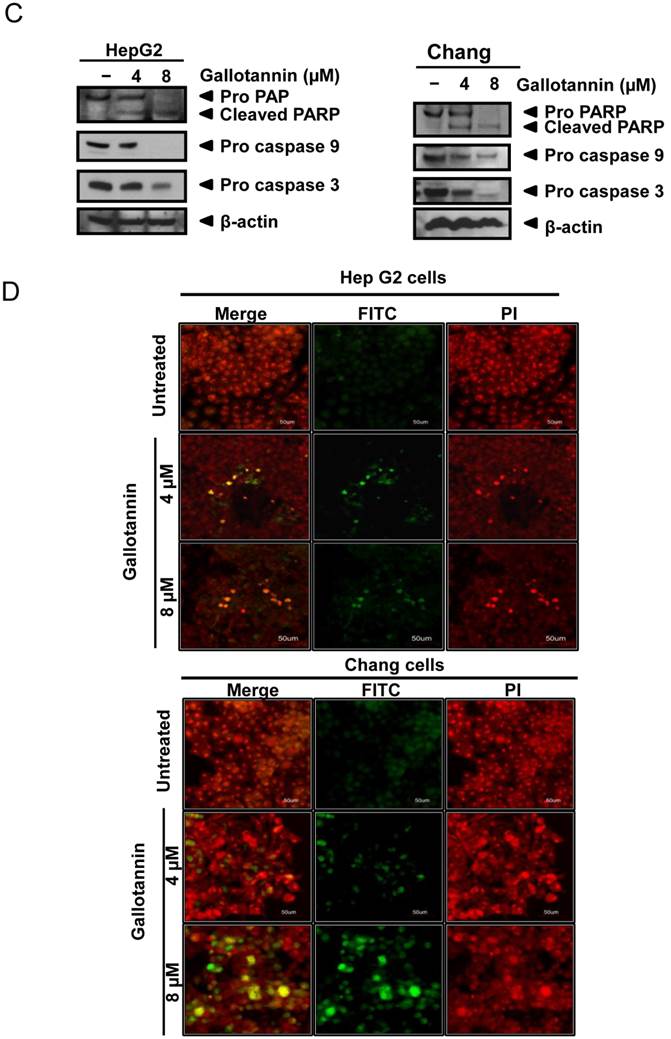 Gallotannin suppressed the migration and adhesion of Hep G2 cells. (A) Effect of gallotannin on the migration of Hep G2 cells by wound healing assay. Confluent cells were scratched and then treated with gallotannin in a complete medium for 24 h. The number of cells migrated into the scratched area was photographed (×100). (B) Effect of gallotannin on the adhesion to Matrigel coated plate after 20 min exposure. Attached cells were photographed (×200) after crystal violet staining (C) Quantification of attached cells. Scale bar = 100 μm. ***, p < 0.001, vs untreated control. (D) Western blotting was performed with antibody of integrin β1 in Hep G2 cells exposed to gallotannin for 24 h. 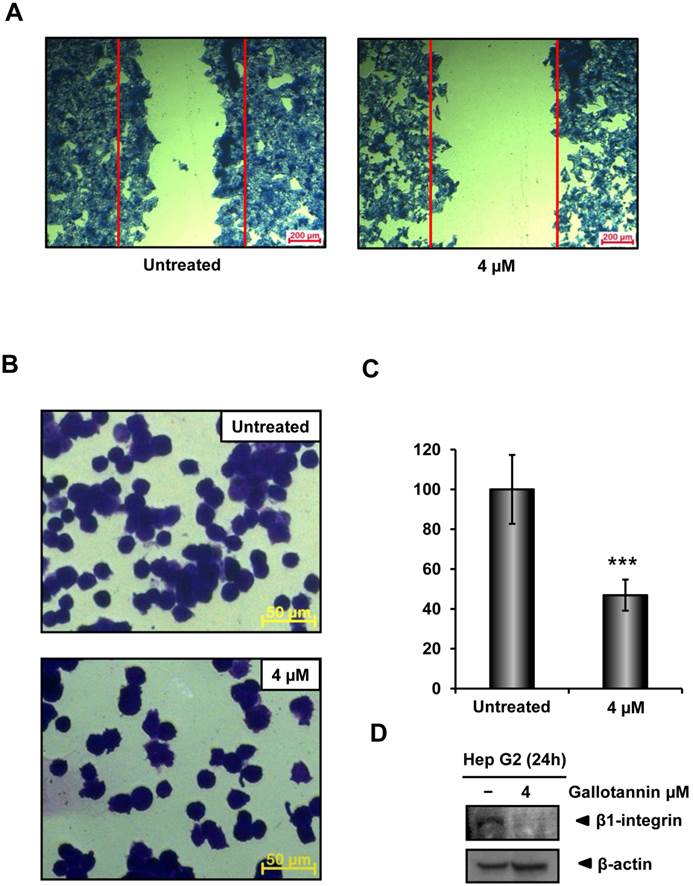 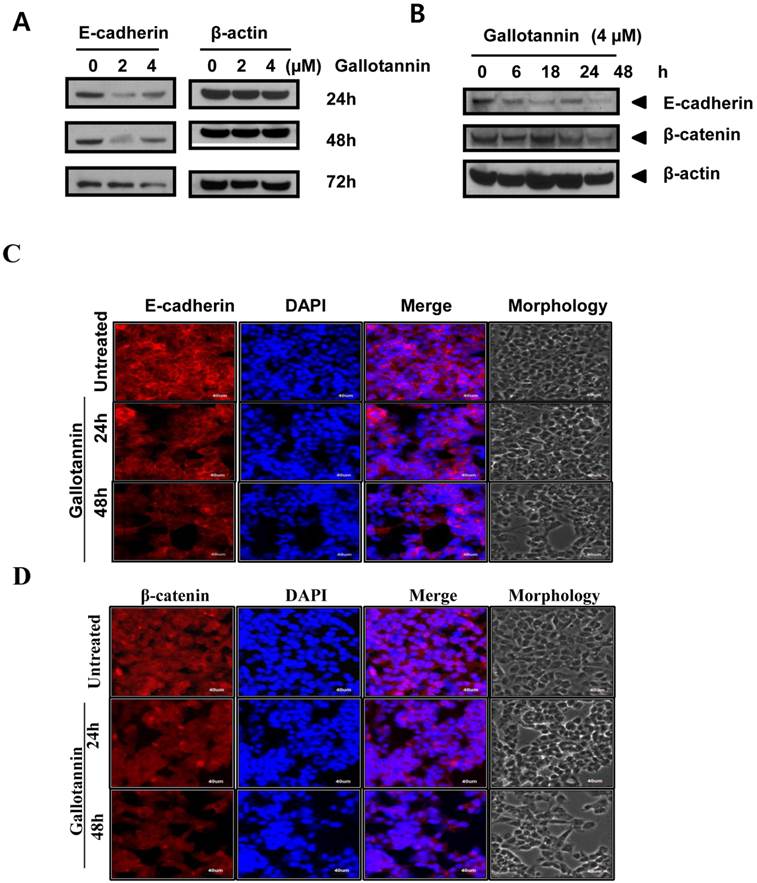 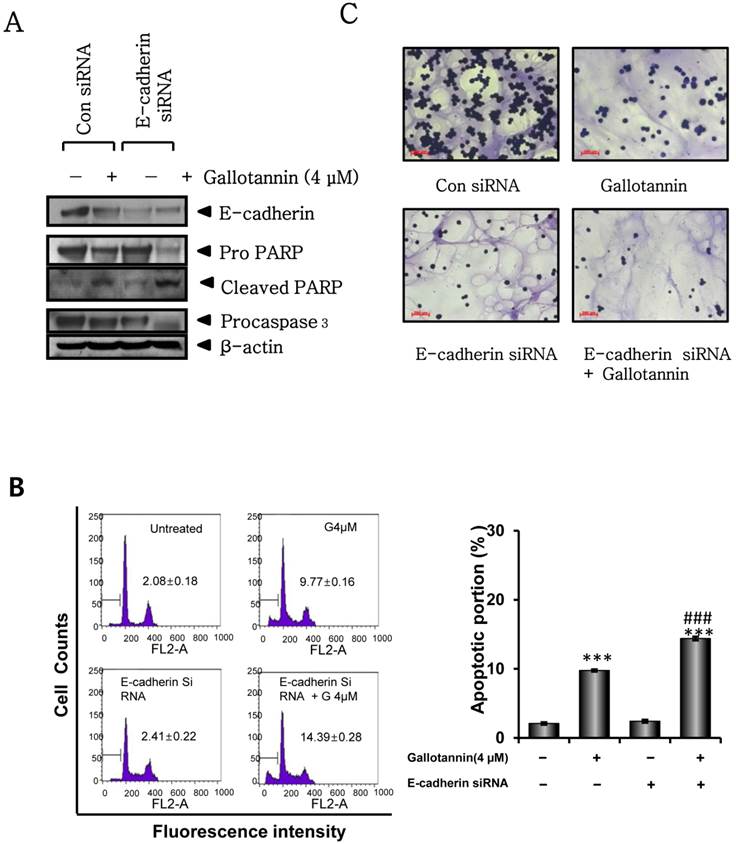 Polyphenolic compounds such as ellagitannins (24), and oligomeric proanthocyanidins (25) induced apoptosis and inhibited the growth of several human cancer cells. Furthermore, pentagalloyl glucose (PGG) which is the precursor of gallotannin has been shown to induce cell cycle arrest and apoptosis (26, 27), and suppress angiogenesis and tumor growth in vivo (28). Gallotannin, a water soluble polyphenol, was known to have antitumor activity in several cancers such in colon (15, 29), lung (16) and breast (30). Al-Ayyoubi et al reported that gallotannin inhibited the growth of HCT-116 colon cancer cells and also induced apoptosis in HCT-116 p53 (+/+) cells (15). Yu et al suggested that gallotannin induced apoptosis in A549 lung cancer cells via phosphorylation of Akt and p38 signaling and induction of COX-2(16). Nevertheless, the underlying antitumor mechanism of gallotannin was not fully understood until now. Thus, in the current study, antitumor mechanism of gallotannin was elucidated in Hep G2 and Chang hepatocellular carcinoma cells. Gallotannin showed significant cytotoxicity in Hep G2 and Chang cells and also significantly increased sub-G1 population, implying the cytotoxicity of gallotannin was exerted by apoptosis induction.

There are evidences that cell adhesion involvement in tumorigenesis and invasion focused on E-cadherin, given that this molecule is the major cadherin involved in epithelial cell-cell adhesion, and the majority of cancers originate from epithelial cells (35, 36). Wound healing assay revealed gallotannin suppressed cell repair motility after 24 h expoure and also adhesion assay showed gallotannin inhibited cell adhesion to Matrigel coated plate at nontoxic concentrations only after 20 min exposure in Hep G2 cells, implying the inhibitory effect of gallotannin on migration and adhesion to extracellular matrix in epithelium. Consistently, Immunofluorescence assay confirmed that red color E-cadherin expression around membrane was reduced compared to untreated control in Hep G2 cells.

There are previous evidences that E-cadherin is involved in adhesion and apoptosis. Loss of cell to cell contact resulted in anoikis which is a specific apoptotic process (37) and loss of E-cadherin and beta catenin led to an early trigger of apoptosis (22, 23). Also, E-cadherin known as a substrate for caspase 3 (20), prevented the apoptosis in immmortalized granuloma cells (38) and suppressed the anoikis in Ewing sarcoma cells (21). Several studies suggest that degradation of E-cadherin and beta-catenin is processed by the lysosome and the proteasome upon junction disorganization (39) and caspases upon apoptosis (40, 41). Similarly, in the current study, silencing of E-cadherin representing loss of E-cadherin enhanced PARP cleavage and caspase 3 activation as well as the accumulation of sub G1 contents induced by gallotannin in Hep G2 cells, demonstrating the loss of E-cadherin initiates apoptosis induction at early stage in Hep G2 cells. Nonetheless, the exact molecular mechanism by which silencing of E-cadherin enhances gallatonnin induced apoptosis as an indirect initiator of apoptosis still remains unclear. Thus, further study is requested to elucidate the exact role of E-cadherin in apoptosis induction in vitro and in vivo in the future. Overall, our findings demonstrate that gallotannin enhanced apoptosis in Hep G2 hepatocellular cancer cells partly via the disruption of cell adhesion junction by suppression of E-cadherin as a potent chemopreventive agent for liver cancer treatment and prevention.

This work was supported by the National Research Foundation of Korea (NRF) grant funded by the Korea government (MSIP) (No. 2007-0054931).