Coenzyme Q10 (CoQ10) acts by scavenging reactive oxygen species to protect neuronal cells against oxidative stress in neurodegenerative diseases. The present study was designed to examine whether CoQ10 was capable of protecting astrocytes from reactive oxygen species (ROS) mediated damage. For this purpose, ultraviolet B (UVB) irradiation was used as a tool to induce ROS stress to cultured astrocytes. The cells were treated with 10 and 25 μg/ml of CoQ10 for 3 or 24 h prior to the cells being exposed to UVB irradiation and maintained for 24 h post UVB exposure. Cell viability was assessed by MTT conversion assay. Mitochondrial respiration was assessed by respirometer. While superoxide production and mitochondrial membrane potential were measured using fluorescent probes, levels of cytochrome C (cyto-c), cleaved caspase-9, and caspase-8 were detected using Western blotting and/or immunocytochemistry. The results showed that UVB irradiation decreased cell viability and this damaging effect was associated with superoxide accumulation, mitochondrial membrane potential hyperpolarization, mitochondrial respiration suppression, cyto-c release, and the activation of both caspase-9 and -8. Treatment with CoQ10 at two different concentrations started 24 h before UVB exposure significantly increased the cell viability. The protective effect of CoQ10 was associated with reduction in superoxide, normalization of mitochondrial membrane potential, improvement of mitochondrial respiration, inhibition of cyto-c release, suppression of caspase-9. Furthermore, CoQ10 enhanced mitochondrial biogenesis. It is concluded that CoQ10 may protect astrocytes through suppression of oxidative stress, prevention of mitochondrial dysfunction, blockade of mitochondria-mediated cell death pathway, and enhancement of mitochondrial biogenesis.

Astroglial cells are located in the brain and optic nerve head [1, 2]. They provide structural, trophic, and metabolic support to neurons and modulating synaptic activity [2-7]. The survival of astroglial cells is critical for repair and recovery of ischemia damaged brain tissue [8-10]. UVB irradiation is known to cause DNA damage and increase reactive oxygen species (ROS). Increased ROS accumulation, either caused by enhancement of production or suppression of anti-oxidant capacity, is highly toxic to many types of cells including astrocytes [11, 12]. The ROS causes lipid peroxidation, protein oxidation and mutagenesis [13]. Inhibition of ROS production can protect cells against oxidative stress-mediated neuronal cell death [14].

Coenzyme Q10 (CoQ10) is an essential cofactor of the electron transport chain. CoQ10 has been shown to protect neuronal cells from UVB and ROS induced damage and to improve neurological behavior in animal models of Parkinson's disease [15]. Either intraocular or oral administration of CoQ10 has been shown to minimize the glutamate toxicity and to protect cells from brain ischemia/reperfusion induced damage in rats [16]. Our previous studies also suggest that CoQ10 could protect neural cells from UVB damage [17]. However, it is not until recently the effects of CoQ10 were studied in astrocytes. The aim of this study is to examine the protective effects of coenzyme CoQ10 on astrocyte cell death and to explore the mechanisms of protection.

At 24 h after termination of UVB irradiation, the number of viable cells in 12-well plates was counted using Beckman Coulter Vi-Cell Automated Cell Viability Analyzer (WS-VICELL), which uses the trypan blue exclusion principle. The percent of cell viability was calculated and presented. Cell viabilities were further verified using the MTT (3-(4, 5,-dimethythiazol-2-yl)-2, 5-diphenyl tetrazolium bromide) conversion assay, which also reflects the mitochondrial succinate dehydrogenase activity. Absorbency at the wavelength 570 nm was read on an ELISA plate reader (Molecular Device, San Jose, USA). The results were expressed as a percentage of absorbency relative to control values. All experiments were performed in triplicate and repeated in at least three separate experiments.

The cells were homogenized in 10 volumes of the 1x Extraction Buffer (MITOSIO1, Sigma) containing isotonic solution of mM HEPES (pH 7.5), 200 mM mannitol, 70 mM sucrose, 1 mM EGTA and 2 mg/ml dilapidated BSA. The homogenate was centrifuged at 600 g for 5 min and the supernatant was removed. The pellet was resuspended with 1x extraction buffer and centrifuged at 11,000 g for 10 min. The final pellet was resuspended in 1x extraction buffer (~40 ml/100 mg tissue). Protein concentrations were determined using a microplate BCA protein assay kit (Thermo Scientific) and 0.2 mg of protein was used for respiration studies. Mitochondrial respiration was assessed in a peltier temperature-controlled two chamber high-resolution respirometer (O2K, Oroboros Instruments, Austria) at 37ºC.

Intracellular ROS (superoxide anion) production was measured using dihydroethidine (DHE) probe in 4 experimental groups. Briefly, cells (2 × 106/mL) were incubated with the DHE (2.5 μM) for 30 min at 37 °C. Cells were washed, resuspended in PBS and analyzed for fluorescence intensity using a Fluoromax-4 spectrofluorometer (HORIBA Jobin Yvon Inc, Edison, NJ) at the excitation and emission wavelengths of 480 nm and 590 nm, respectively. The fluorescence was recorded and presented as relative fluorescence intensity (RFI). Mitochondrial membrane potential was measured using the tetramethylrhodamine methyl ester (TMRM). Briefly, cells (1×106/mL) were harvested and incubated with 30 nM TMRM at 37 °C for 1 h. The cells were washed in PBS and fluorescence measurement was obtained using the Fluoromax-4 spectrofluorometer at excitation and emission of 530 and 573 nm respectively. Mitochondrial potential was dissipated with carbonylcyanide p-trifluoromethoxyphenylhydrazone (FCCP 5 µM) and used as a positive control.

After 24 h UVB treatment, cells were collected and lysed on ice in lysis buffer containing 20 mM Tris (pH7.4), 10 mM KCl, 3 mM MgCl2, 0.5% NP40 and complete protease inhibitors (Millipore). The lysates were centrifuged at 500 g for 10 min. The supernatant (S1) fraction was then centrifuged at 20,000 g for 20 min and the resulting supernatant was used as a cytosolic fraction. The pellet (P1) fraction was washed twice with lysis buffer and resuspended in lysis buffer containing 1%SDS. The resulting lysates were sonicated briefly (Misonix, Ultrasonic Cell Disrupter) and then centrifuged at 20,800 g for 30 min. The resulting supernatants were designated as nuclear fractions. The purity of different cellular fractions has been tested previously [18]. Protein contents from each sample were measured using Microplate BCA Protein Assay Kit (Thermo Scientific). Equal amounts of protein (20 µg) were loaded into each lane, separated in 10% NuPAGE BT gels (Invitrogen), transferred to a PVDF membrane (Millipore), and probed with antibodies against cytochrome c (1:500, Millipore), caspase-9 (1:1000, Cell Signaling), or caspase-8 (1:1000, Cell Signaling).

Mitochondrial biogenesis was analyzed with MitoBiogenesis™ In-Cell ELISA Kit (ab110217, ABCAM) according to the manufacturer's protocol. Briefly, 20,000 cell per well were seeded in 96 well plate. These cells were fixed with 4% paraformaldehyde after adhering to the bottom of the plate. Cells were washed with PBS and followed by the addition of 100 μL of freshly prepared 0.5% acetic acid for 5 minutes to block endogenous alkaline phosphatase activity. Cells were washed again with PBS and permeabilized with 0.1% Triton X-100 for 30 min and followed by the addition of 200 μL of 2X Blocking Solution for 2 h. These cells were then incubated with primary antibodies specifically against mtDNA encoded COX-I, and nuclear-DNA encoded SDH-A proteins. Cells were washed with a washing buffer and incubated with AP for SDH-A and HRP for COX-I secondary antibodies. After washing, the reaction was sequentially developed first with AP reagent and then HRP development solution. A 15-min kinetic reaction with 1 min interval was recorded using a microplate reader. Whole cell staining with Janus Green was also done to remove variation due to cell loss during the procedure. The experiment was run in triplicates and at minimum 3 repetition per group. The ratio of COX-I/SDH-A was calculated to determine mitochondrial biogenesis.

Data are presented as means ± S.D. One-way ANOVA followed by Tukey's test was used for statistical analysis. A value of P < 0.05 was considered statistical significant.

To investigate the effect of CoQ10 on UVB-induced damage to astrocytes, the cell viability was assessed using the MTT assay for non-UVB-challenged (Fig. 1A), UVB-challenged (Fig. 1B), and CoQ10-treated groups (Fig. 1C-D). Addition of 0.1% DMSO did not influence of the cell survival rate after UVB-irradiation. UVB exposure decreased cell viability to 60% of the control value. Treatment with CoQ10 at a concentration of 10 or 25 μg/ml for 24 h prior to UVB exposure and maintaining the same concentration for 24 h after UVB significantly improved cell viability compared with UVB-irradiated astrocytes (Fig. 1E). 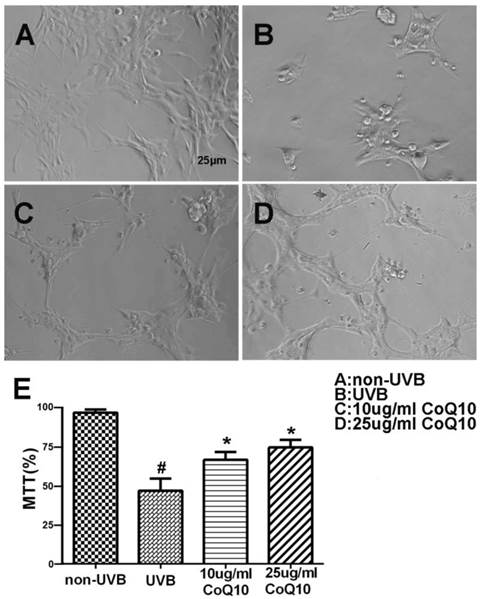 Production of superoxide radicals and changes of mitochondrial membrane potential

To examine whether CoQ10 inhibits mitochondria-initiated or receptor-mediated apoptotic cell death pathways, we performed Western blotting and/or immunocytochemistry using specific antibodies against cyto-c and caspase-9, and caspase-8. As shown in Fig. 4A, number of cells with cytosolic localization of cyto-c increased after UVB irradiation and decreased in cells treated with 25 µg/ml Co-Q10. Similarly, number of caspase-9 positively stained cells increased in UVB irradiated cell and decreased by Co-Q10 treatment. These results were further confirmed by protein electrophoresis. Thus, protein levels of cyto-c, cleaved caspase-9 and caspase-8 were significantly increased after UVB irradiation; whereas pretreatment with CoQ10 for 24 h at the concentrations of 25 µg/ml markedly suppressed the release of cyto-c and activation of capase-9, but not caspase-8, in the cytosolic fraction (Fig. 4B, 4C). The inhibiting effects of CoQ10 on these proapoptotic factors exhibited a dose dependent manner. When the concentration of CoQ10 increased from 10 to 25 µg/ml, the levels of the detected indices were further decreased.

Mitochondrial respiratory rate after CoQ10 treatment in UVB exposed astrocytes. (A) Comparison between control and UVB-challenged cells. (B) Comparison between UVB and CoQ10+UVB treated cells. (C and D) Summarized data from 3 independent experiments. One-way ANOVA followed by Tukey's test. #P < 0.01 vs. control and *P < 0.05 vs. UVB. Data are presented as means ± S.D. 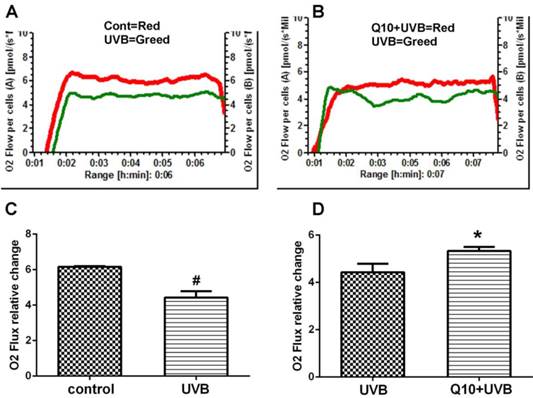 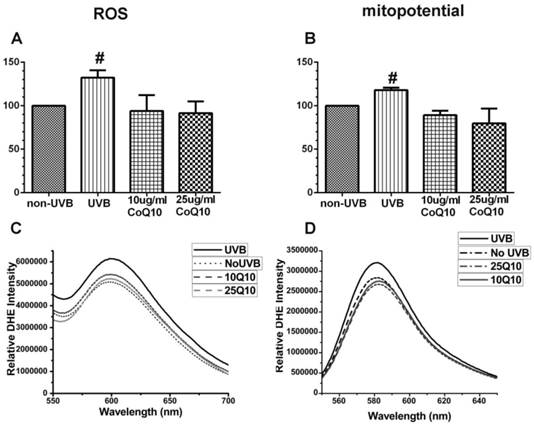 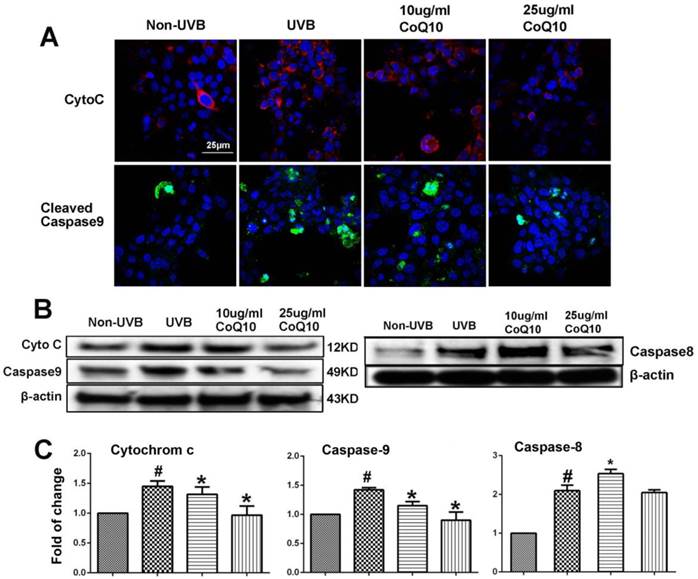 CoQ10 has been shown to protect neuronal cells from UVB and ROS induced damages and to improve neurological behavior in in vivo animal models of Parkinson's disease [15,19]. It is not until recently the effects of CoQ10 were studied in astrocytes. In the present study, we have demonstrated that UVB irradiation resulted in astrocyte cell death, suppressed mitochondrial respiratory rate, enhanced ROS accumulation, increased mitochondrial membrane potential caused release of cyto-c and activation of both caspases-9 and -8. Pretreatment with CoQ10 ameliorated UVB-induced cell death, improved mitochondrial respiration, reduced ROS level, stabilized mitochondrial membrane potential, and prevented the release of cyto-c and increases of caspase-9. In the present study, we selected UVB stressed astrocytes as our experimental model. This is based on the considerations that UV irradiation has been used as an ROS stress model because the major damage mechanism of UVB is the increase in ROS production and that astrocytes in optic nerve head get direct UV irradiation. Therefore, UVB irradiated astrocytes is a clinically relevant model.

In summary, our data have shown that the protective effect of CoQ10 is associated with its ability to decrease ROS production, to stabilize mitochondrial membrane potential, to improve mitochondrial respiration, to inhibit mitochondria-mediated cell death pathway, and to activate mitochondrial biogenesis.

LJ was supported by National Science Foundation of China (81260184) and Ningxia Medical University Research Fund (XT2011009, KF20100-26); JZZ by the National Science Foundation of China (81360184); and PAL by the National Institute of Health (7R01DK075476-06). The authors greatly appreciate Dr. Carla Oldham at the North Carolina Central University for proofread the manuscript.