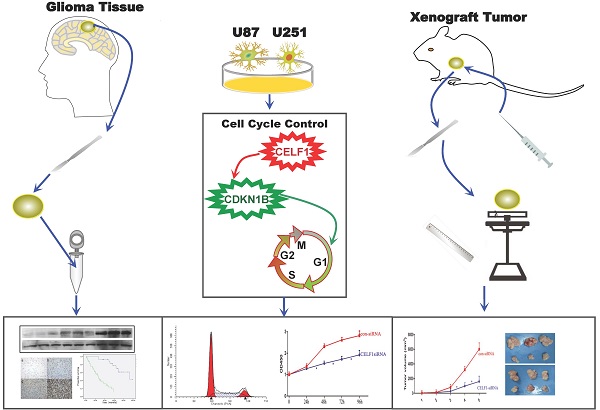 BACKGROUND: As a member of the CELF family, CELF1 (CUG-binding protein 1, CUGBP1) is involved in cardiac and embryonic development, skeletal muscle differentiation and mammary epithelial cell proliferation. CELF1 is also observed in many kinds of cancer and may play a great role in tumorigenesis and deterioration. However, the expression and mechanism of its function in human glioma remain unclear.

METHODS: We examined CELF1 expression in 62 glioma patients by immunohistochemistry and Western blot. The association between the expression of CELF1 protein and clinicopathological characteristics was analysed using SPSS 17.0. Survival analyses were performed using the Kaplan-Meier method. Small-interfering RNA was utilised to specifically knockdown CELF1 mRNA in U87 and U251 cells. Cell proliferation, cell cycle and cell apoptosis were tested by Cell Counting Kit-8 and flow cytometry. The expression of cell cycle-related gene CDKN1B was investigated by Western blot. The interactions between CELF1 and CDKN1B were detected with immune co-precipitation. Subcutaneous tumour models were used to study the effect of CELF1 on the growth of glioma cells in vivo.

CONCLUSIONS: Results indicated that CELF1 may be a novel independent prognostic predictor of survival for glioma patients. It may promote glioma cell proliferation and cell cycle process during glioma carcinogenesis.