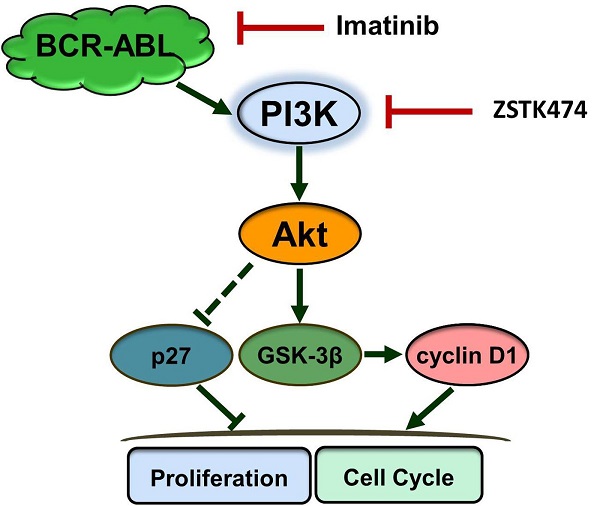 Chronic myelogenous leukemia (CML) is a malignant hematological disorder mainly caused by the Bcr-Abl tyrosine kinase. While Bcr-Abl inhibitors including Imatinib showed antitumor efficacy on many CML patients, resistance was frequently reported in recent years. Therefore, novel drugs for CML are still expected. ZSTK474 is a specific phosphatidylinositol 3-kinase (PI3K) inhibitor that we identified. In the present study, the efficacy of ZSTK474, alone or in combination with Imatinib, on K562 CML cells as well as on its multidrug resistance counterpart K562/A02 cells, was investigated. ZSTK474 inhibited the cell proliferation with an IC50 of 4.69 μM for K562 and 7.57 μM for K562/A02 cells, respectively. Treatment by ZSTK474 resulted in cell cycle arrest in G1 phase, which might be associated with upregulation of p27, and downregulation of cyclin D1. ZSTK474 also inhibited phosphorylation of Akt and GSK-3β, which might be involved in the effect on the above cell cycle-related proteins. Moreover, combination of ZSTK474 and Imatinib indicated synergistic effect on both cell lines. In conclusion, ZSTK474 exhibited antileukemia activity alone, and showed synergistic effect when combined with Imatinib, on CML K562 cells as well as the multidrug resistant ones, providing a potential therapeutic approach for CML patients.

Chronic myelogenous leukemia (CML), a myeloproliferative disease, is mainly molecularly diagnosed by the Philadelphia (Ph) chromosome which originates from a reciprocal translocation of breakpoint cluster region (Bcr) gene on chromosome 22 with Abelson (Abl) gene on chromosome 9 and leads to a chimeric oncogene called Bcr-Abl [1-3]. This fusion gene encodes p210 Bcr-Abl protein showing intrinsic tyrosine kinase activity [4, 5]. As p210 Bcr-Abl protein is crucial for CML progression, drug development for CML therapy mainly focused on tyrosine kinase inhibitors targeting Bcr-Abl in the past 15 years. Imatinib, a Bcr-Abl inhibitor as the first generation molecular-targeted agent against CML, inhibits p210 Bcr-Abl protein by binding with Abl at ATP-binding site and has been demonstrated to be therapeutically efficient [6-8]. Nevertheless, reports about resistance to Imatinib in clinic have been increasing [9, 10]. Therefore, discovery of novel effective agents with low resistance is urgent for CML treatment.

Phosphatidylinositol 3-kinases (PI3Ks) are lipid kinases that preferentially phosphorylate phosphatidylinositol 4,5-bisphosphate (PIP2) to generate phosphatidylinositol 3,4,5-trisphosphate (PIP3) which activates the downstream Akt, and therefore play important roles in controlling signal pathways involved in cell proliferation, etc [11]. Bcr-Abl was reported to promote carcinogenesis and CML cell proliferation through PI3K/Akt pathway [12, 13]. Therefore, PI3K might be a potential target for CML therapy. ZSTK474, a specific PI3K inhibitor we identified by use of JFCR39 drug discovery system [14, 15], was reported to show potent antitumor efficacy on various solid tumors [16, 17]. However, the antileukemia effect of ZSTK474 has not yet been reported.

Recently, we investigated the in vitro antileukemia activity of ZSTK474 on CML cell K562 as well as the multidrug resistant counterpart K562/A02. Moreover, the synergistic effect of combinational use of ZSTK474 and Imatinib was analyzed.

The human chronic myelogenous leukemia K562 cell line was purchased from Cell Resource Center, Peking Union Medical College (Beijing, China). K562/A02, an ADR-selected multi drug resistance (MDR) cell sub-line, was a gift from the Institute of Hematology, Chinese Academy of Medical Sciences. Cells were cultured in RPMI 1640 medium supplemented with 10% (v/v) fetal bovine serum, 1% kanamycin (100 μg/ml), and 1% glutamine (0.44 μg/ml) in a 5% CO2 incubator at 37℃. In the case of K562/A02 cell culture, ADR (1 μg/ml, final concentration) was added in the medium to maintain the MDR phenotype. The cells were further cultured in ADR-free medium for 2 weeks before experiment.

Cell proliferation assay was performed using MTT assay as described in our previous reports [18, 19]. Two hundred microliters of cell suspension (2×104 cells/ml) were seeded in 96-well plate, and incubated together with various concentrations of ZSTK474 or Imatinib for 48 h at 37℃. After addition of MTT, the cells were further incubated for 4 h and dissolved in DMSO. The resulting absorbance at 490 nm was measured by microplate reader iMark (BIO-RAD, Hercules, CA, USA).

Cell cycle distribution was carried out by flow cytometry analysis as described by us previously [20]. Briefly, 2 ml of cell suspension (5×105 cells/ml) was seeded in 6-well plate. After treated with ZSTK474, cells were harvested, washed with ice-cold PBS and fixed with 70% ethanol overnight. The cell suspension was centrifuged, and the resulting cell pellet was resuspended in 25 μg/ml of PI solution containing 0.5% Triton X-100 and 2% RNase A. The treated cells were incubated for 30 minutes in the dark at 4 °C to be available for cell cycle analysis with flow cytometer BD Accuri C6 (BD Biosciences, San Jose, CA, USA). Data were analyzed by using Modfit software.

Synergism assay was conducted to analyze whether combination of ZSTK474 with Imatinib can achieve an improved therapeutic effect. Cell growth inhibition activities of each single drug and the combination at a fixed ratio (IC50 ZSTK474׃IC50 Imatinib) were tested, respectively. For drug combination experiments, the combination index (CI) was calculated using CalcuSyn software according to the method of Chou and Talalay [24]. CI > 1 indicates antagonism, CI = 1 indicates additivity, CI < 1 indicates synergism. All experiments were carried out in triplicate.

K562 is a chemosensitive cell line, while K562/A02 cell, an ADR-selected MDR cell sub-line, was reported to have MDR phenotype due to the reduced intracellular drug accumulation and wide cross-resistance [25]. In order to confirm this, we exposed K562 and K562/A02 cells to various concentrations of ADR for 48 h, then determined the inhibitory activities of ADR on both cell lines by using MTT assay. As shown in Fig. 1A, ADR showed different potency in inhibition against proliferation of K562 and K562/A02 cells, with the IC50 to be 0.17 μM and 9.88 μM, respectively. K562/A02 exhibited about 50 fold resistance to ADR compared with K562 cell line, suggesting the MDR characteristic of K562/A02.

Anti-proliferative activity of ZSTK474 on K562 and the resistant K562/A02 cells. (A) K562/A02 cells showed resistance to ADR. Cell viability was determined by MTT assay after treatment with various concentration of ADR for 48 h. (B) ZSTK474 inhibited the proliferation of both K562 and K562/A02 cells in a dose dependent manner. The cells were treated with various concentrations of ZSTK474 for 48 h. MTT assay was carried out to measure the cell viability. Data are mean ± SD, representative of three independent experiments.

ZSTK474 induced cell cycle arrest at G1 phase in K562 and K562/A02 cells. (A) Cell cycle distribution analysis by flow cytometer. K562 and K562/A02 cells were incubated with indicated concentrations of ZSTK474 for 48 h. The cells were harvested, stained with PI and analyzed by flow cytometer. Cell cycle distribution was further analyzed by Modfit software. (B) The percentage of total cells at G1, S, and G2/M phases. Data are mean ± SD, representative of three independent experiments. 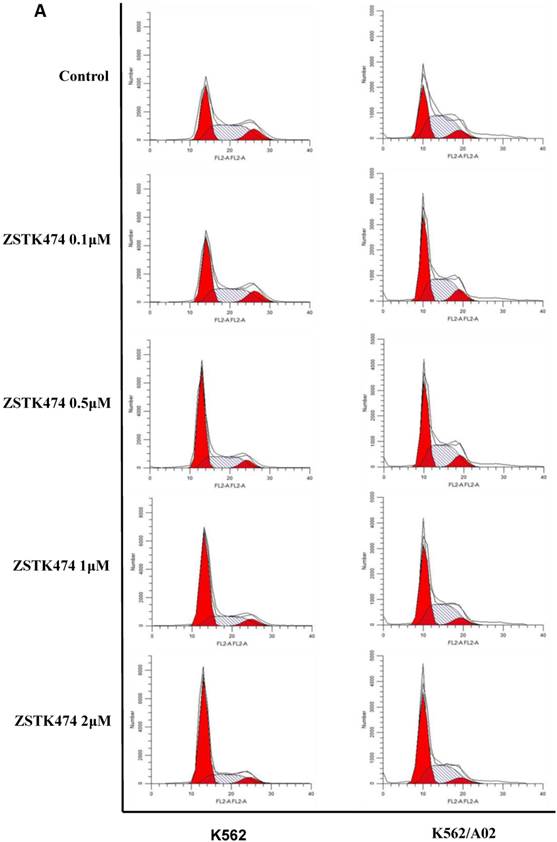 Cell cycle progression is regulated positively by CDK (cyclin-dependent kinases)-cyclins, and negatively by CDK inhibitors including p27. To investigate the mechanism involved in ZSTK474-induced G1 arrest, we examined the effect on cyclin D1, p27, as well as the downstream pRb by Western blot. As shown in Fig. 3A, after treatment with ZSTK474 for 48 h, the expression of p27 increased, while the level of cyclin D1 and phosphorylated pRb decreased, in the nucleus of both K562 and K562/A02 cells, in a dose-dependent manner. The effect of ZSTK474 on p27 expression at mRNA level was also examined by use of qRT-PCR. Fig. 3B showed that the RNA expression levels of p27 in K562 and K562/A02 cells were enhanced obviously after ZSTK474 treatment (p < 0.05, compared with vehicle group). It could be concluded that upregulation of p27, and downregulation of cyclin D1 might be involved in G1 arrest induced by ZSTK474 in K562 and K562/A02 cells.

Since ZSTK474 is a specific PI3K inhibitor, and PI3K/Akt pathway is known to play an important role in cell cycle progression, in order to further investigate the mechanism involved in ZSTK474-induced G1 arrest, we examined the effect on the signal proteins downstream of PI3K/Akt pathway. As shown in Fig. 4, ZSTK474 inhibited the phosphorylation of Akt dose-dependently, while total Akt amount was not affected, in both K562 and K562/A02 cells. Furthermore, phosphorylation of GSK-3β was also reduced by ZSTK474 in a dose-dependent manner (Fig. 4). GSK-3β is known as an upstream activator of cyclin D1, and a downstream effector of Akt [26, 27]. P27 was also known to be regulated by Akt [27]. Therefore, our results suggested that PI3K/Akt/GSK-3β/cyclin D1 as well as PI3K/Akt/p27 pathways might be involved in the cell proliferation inhibition and G1 arrest by ZSTK474 in K562 and K562/A02 cells.

ZSTK474 affected the cell cycle-related proteins in K562 and K562/A02 cells. (A) Western blot analysis of the cell cycle-related proteins. K562 and K562/A02 cells were treated with indicated concentrations of ZSTK474 for 48 h. The levels of cyclin D1, p27, and p-pRb in nucleus were determined by western blot. (B) qRT-PCR analysis of p27 expression at mRNA level. Total RNA of the cells was extracted using TriZol reagent and quantified by a Nanodrop spectrophotometer. Five hundred ng of RNA was reverse-transcribed to cDNA. The PCR reaction was conducted in a 20 µl system containing 100 ng cDNA, 200 nM of former primer and reverse primer, using CFX96TM Real-Time PCR Detection System. GAPDH was used as a housekeeping gene to normalize RNA expression. The relative gene expression levels were quantified by using the comparative Ct (ΔΔCt) method. Results represent mean ± SD of three independent experiments. *p < 0.05, **p < 0.01, ***p < 0.001, compared with control. 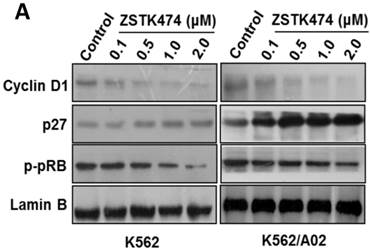 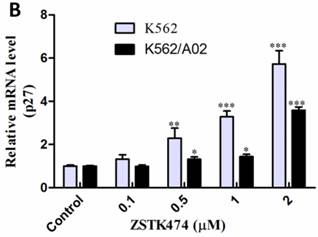 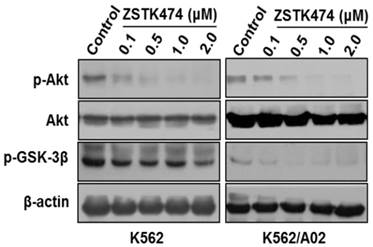 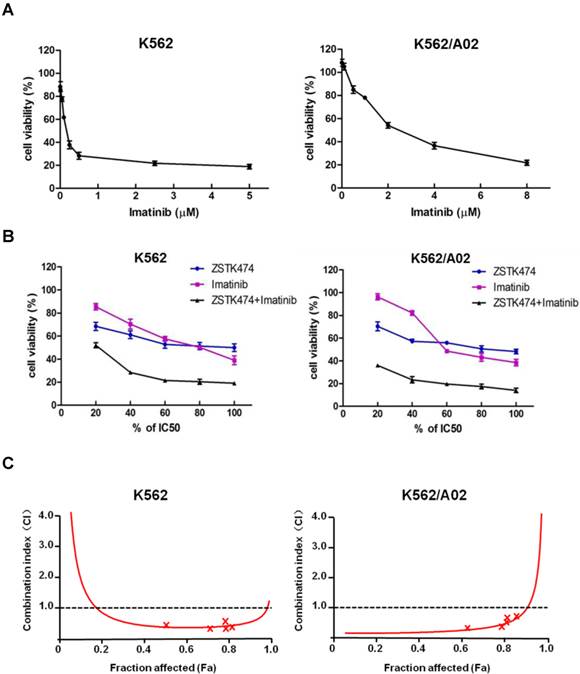 Current therapeutic approaches for CML mainly include chemotherapy with Bcr-Abl targeted drug or cytotoxic agents, and stem cell transplant [29]. Although the efficacy of the first generation Bcr-Abl inhibitor Imatinib is undoubted for CML therapy, resistance remains to be a challenge [30]. Causes of the drug resistance include P-glycoprotein (P-gp) upregulation, Abl kinase domain mutations, and Bcr-Abl overexpression [31]. While new generations of inhibitors targeting Bcr-Abl have been developed and used in clinic [32], it has been reported that blocking Bcr-Abl kinase activity is not sufficient to eliminate leukemogenic events [2, 33]. Since PI3K/Akt pathway is closely related to cell survival and cell cycle progression, PI3K has become a promising target for cancer therapy [34, 35]. Currently, over a dozen of PI3K inhibitors are in clinical trials. However, to our knowledge, there is no report about the antitumor effect of PI3K inhibitors on CML until now.

ZSTK474 induced G1 arrest in both K562 and K562/A02 cells. Meanwhile, treatment with similar concentrations of ZSTK474 led to upregulation of p27, downregulation of cyclin D1, and the decreased phosphorylation of pRb. Since cyclin D1 is a substrate of GSK-3β and p27 is reported to be upregulated by Akt [27], the induction of G1 arrest by ZSTK474 might be associated with the blockade of PI3K/Akt pathway.

Accumulating reports showed that proper drug combination often leads to incredible efficacy compared with the single use of a drug or a drug having dual targets [37, 38]. Our result showed that combination of ZSTK474 and Imatinib was highly synergistic. Interestingly, synergism of these two drugs on the resistant K562/A02 cells seem to be more effective than that on K562 cells. Such effects might be associated with the following mechanisms: 1. ZSTK474 reverses the resistance of K562/A02 cells to ADR and Imatinib by downregulating P-gp expression; 2. ZSTK474 and Imatinib act on different targets for CML therapy: PI3K and Bcr-Abl. The synergic effect of ZSTK474 combination with Imatinib implies the promising application in therapy of CML patients with multidrug resistance.

In summary, our study showed that ZSTK474 exhibited anti-proliferative and G1 arrest effect on both K562 and K562/A02 cells via blocking PI3K/Akt pathway. Combination of ZSTK474 with Imatinib indicated synergistic effect. In addition, previous in vivo experiments [15, 16] and preliminary clinical result [unpublished data] have shown that ZSTK474 is generally safe and quite tolerable. Our report suggests a promising therapeutic approach for CML therapy in the future.