The prevalence of autism spectrum disorders in China: a comprehensive meta-analysis

There are conflicting prevalence estimates of autism spectrum disorders (ASDs) in mainland China (China thereafter). This study is a comprehensive meta-analysis of the pooled prevalence of ASDs in the general population in China. Study investigators independently conducted a systematic literature search of the following databases: PubMed, EMBASE, PsycINFO, China National Knowledge Infrastructure, Chinese biomedical literature service system, and Wan Fang. Studies reporting prevalence of ASDs and autism in Chinese population were identified and analysed using the Comprehensive Meta-Analysis program with the random effects model. Forty-four studies were included in the meta-analysis comprising 2,337,321 subjects of whom 46.66 % were females. The mean age of subjects ranged from 1.6 to 8 years. Based on diagnostic criteria the pooled prevalence of ASDs was 39.23 per 10,000 (95% CI: 28.44-50.03 per 10,000, I2=89.2%); specifically, the prevalence of autism was 10.18 per 10,000 (95% CI: 8.46-11.89 per 10,000, I2=92.5%). Subgroup analyses revealed significant difference in the prevalence of ASDs between genders (72.77 per 10,000 in males vs. 16.45 per 10,000 in females). In conclusion, the prevalence of ASDs and autism in China was found generally lower than those reported in other countries. Further studies are needed to clarify the variation in prevalence.

Autism spectrum disorders (ASDs) refer to a group of pervasive developmental disorders caused by a combination of genetic and environmental factors. They are often associated with pronounced personal suffering and heavy burden of care to families and society [1]. ASDs consist of several subtypes, with autism being the core and the most common one. ASDs usually occur in infancy [2] and present with complex symptoms. Children with ASDs usually have difficulties in understanding language and social behaviors; parental concern is often centered around their children presenting abnormal behaviors, such as mutism, echolalia and lack of expressive emotion [3].

In China, prevalence studies of ASDs have shown conflicting findings. Moreover, most studies were published in Chinese-language journals that are not accessible to international readership. A review of 24 studies [9] found that the pooled prevalence of ASDs in Chinese children was 24.5 per 10,000. Another meta-analysis of 18 studies in China [10] found that a pooled prevalence of autism of 11.8 per 10,000. More than 20 ASDs prevalence studies have been recently published in Chinese, which have enhanced the epidemiological dataset, but are generally not accessible to the international readership. Therefore, we set out to conduct this comprehensive meta-analysis of the pooled prevalence of ASDs in China and also to examine its mediating factors (e.g., gender, region, study period, and diagnostic tools used).

Flow chart of the study 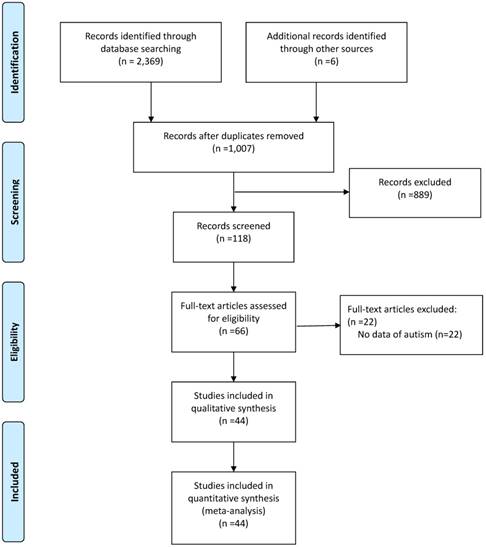 The literature search process is shown in Figure 1. Two investigators (WF and LL) independently searched the literature using PubMed, EMBASE, PsycINFO, China National Knowledge Infrastructure, Chinese biomedical literature service system (SinoMed) and Wan Fang, from their inception to February 1st 2017. Search terms included ('autism' or 'autistic disorder' or 'autism spectrum conditions' or 'pervasive developmental disorders' or 'Asperger') and ('epidemiology' or 'cross-sectional study' or 'prevalence' or 'rate') and ('China' or 'Chinese'). In order to avoid missing any studies, the reference lists of relevant review or meta-analyses were searched manually. If more than one publication was reported based on the same dataset, only the paper with complete data was included.

Inclusion criteria were as follows: 1) cross-sectional or cohort studies conducted in mainland China (China thereafter) (only baseline data were extracted in the latter); 2) participants aged ≤18 years; 3) the diagnosis of ASD was established by either clinical diagnostic criteria [such as the Diagnostic and Statistical Manual of Mental Disorder (DSM), Chinese Classification of Mental Disorder (CCMD) or International Classification of Disease (ICD) systems], or screening tools [such as the Clancy Autism Behavior Scale (CABS), Children Autism Spectrum Test (CAST) and Checklist for Autism in Toddlers (CHAT)]. Both clinical diagnostic criteria and screening tools on ASDs and autism were involved because they have been widely used in epidemiology and clinical practice in China.

After removing the duplicates, two investigators (WF and LL) independently screened the titles and abstracts of all records, and then selected the articles that fulfilled the inclusion criteria. Any uncertainties were resolved by consensus or with a third reviewer (WSB).

Two investigators (WF and LL) independently assessed the quality of included studies using a methodological quality assessment tool with 8 items [11, 12]. Each study was scored from 0 to 8. The score of 7-8 indicated 'high quality', 4-6 indicated 'moderated quality' and 0-3 indicated 'low quality' [12]. Any disagreement in the assessment process was discussed and resolved with a third investigator (WSB).

The Comprehensive Meta-Analysis software version 2 was used to synthesize the data. Due to the heterogeneity in sampling methods, assessment instruments and sample size across studies, random-effects model was used to estimate the pooled prevalence of ASD [13]. The I2 statistic was used to assess the degree of heterogeneity across included studies. Sensitivity and subgroup analysis were used to examine the sources of heterogeneity if present. Publication bias was evaluated with the funnel plots and Egger's test and the significance level was set at 0.05 (two-sided).

Search results and characteristics of studies

Of 2,375 eligible papers identified in literature search, 44 fulfilled the inclusion criteria after screening the titles, abstracts and full texts, and removing the duplicates (Figure 1). Five of these studies were published in English and thirty-nine in Chinese. Their sample size ranged from 259 to 1,348,030 subjects and 42 studies had a sample size greater than 1000. The 44 included studies had a total of 2,337,321 subjects of which 46.66% were females. Sixteen studies reported on the prevalence of ASDs, while 28 focused on the prevalence of autism.

Evaluation quality of the studies

The quality assessment scores ranged from 4 to 8. Based on the assessment criteria, 7 studies were rated as 'high quality', and 37 was as 'moderate quality' (Table 4).

Quality assessment of the included studies

Prevalence of ASDs based on clinical diagnostic criteria

Prevalence of ASDs based on screening tools

Characteristic of the included studies 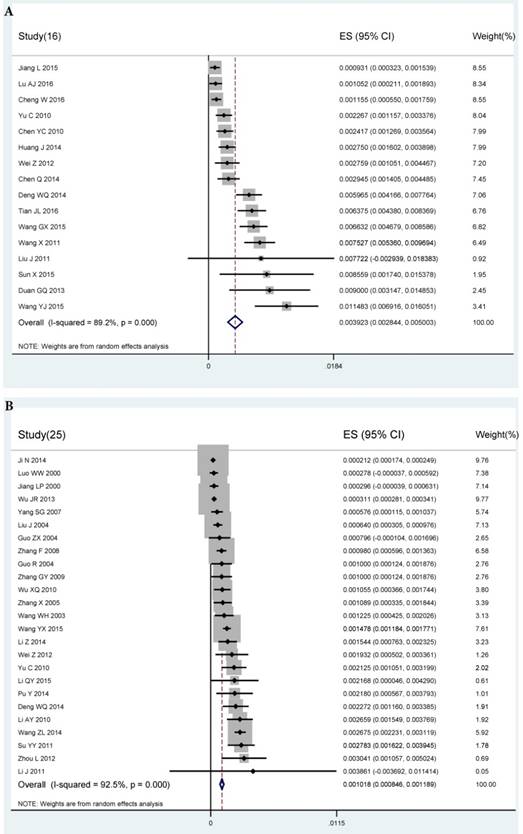 Prevalence of autism based on clinical diagnostic criteria

Prevalence of autism based on screening tools

The sensitivity analyses did not find any individual studies that significantly influence the overall results in each diagnostic group. Egger's test revealed publication bias for ASDs (ASDs: t=2.33, P=0.036), but not for autism (t=1.506, P=0.143). 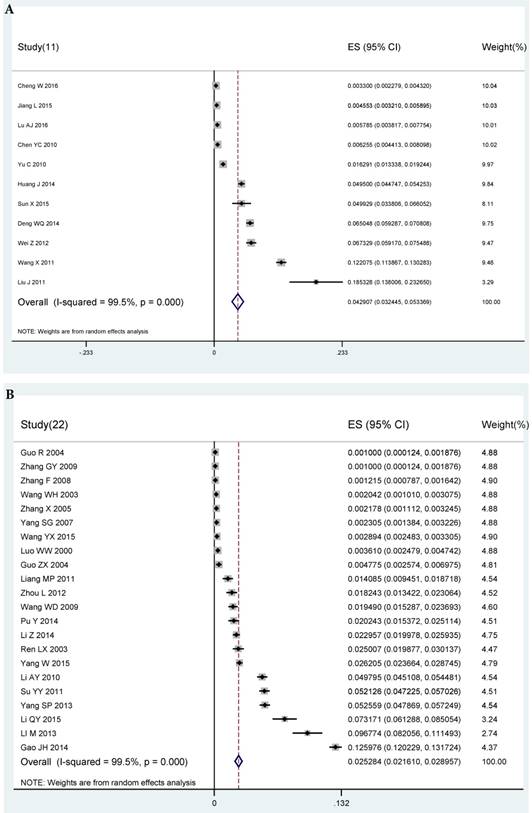 On the other hand, the pooled prevalence of autism of 10.18 per 10,000 established by clinical diagnostic criteria was similar to the systemic review of 24 studies in China (12.8 per 10,000) [9] and another meta-analysis of 18 studies (11.8 per 10,000) [10]. Although significant heterogeneity between studies (I2=92.5%) was noted, sensitivity analyses did not find any outlying studies that significantly affect the overall results in each diagnostic group.

Previous studies found that the prevalence of ASD and autism established by clinical diagnostic criteria in males was 3-4 times higher than in females [20, 21], which is consistent with the results of our study. We also found that the pooled prevalence of autism in urban areas was significantly higher than in rural areas, which is concordant with the urban/rural rates in other developed countries, such as in the USA [22]. Various environmental stressors [23], such as prenatal exposure to environmental stress [24] and lower parental education [16] may partly lead to the urban/ rural difference. However, the urban /rural difference was not found in the prevalence of ASDs in this study.

Children aged 2-6 years had the highest prevalence of ASDs in previous surveys. This study found that the age group ≤4 years had a higher prevalence (530 per 10,000) than the group > 4 years (80 per 10,000), which is not consistent with the findings (the highest risk in children aged 4-6 years) in a national survey in China [25]. In China children with ASDs are usually sent to special schools, which may result in an underestimated prevalence of ASDs in school age children in epidemiological surveys. Further, screening tools that have been widely used in China, such as the CABS, were originally designed to be completed by parents [26]. Parents may wish to avoid the diagnosis of autism or hoped that the symptoms would be reversed in their children, which may lead to an underestimation in self-reported surveys [7]. All these factors could contribute to the relatively lower prevalence of ASDs in school age groups [27].

The prevalence of autism based on clinical diagnostic criteria in studies done before the year 2008 (8.18 per 10,000) was significantly lower than that after 2008 (20.4 per 10,000), which was consistent with previous findings [14]. However, the trend appeared to be the opposite in the prevalence of ASDs (38.72 per 10,000 in and before 2012, and 36.36 per 10,000 after 2012). The discrepancy in findings across study period may be related to differences in diagnostic criteria and qualification of interviewers. In addition, children with ASDs usually present with complex symptoms, which could lead to inaccurate diagnosis [28]. The improvement of standardized interview and diagnostic instruments could partly explain the increased prevalence of autism over time.

The results need to be interpreted with caution due to several limitations. First, heterogeneity was present even in subgroup analyses although such heterogeneity is difficult to avoid in epidemiological studies [29]. Second, different screening instruments and diagnostic criteria were used across studies. In order to reduce the relevant heterogeneity, subgroup analyses between different screening instruments and diagnostic criteria were conducted. Third, the 44 studies in this meta-analysis covered 30, but not all the 34 provinces/municipalities/autonomous regions in China. Finally, relevant factors on the prevalence of ASDs, such as socioeconomic and environmental variables, were not recorded in the majority of papers, therefore their impact could not be examined.

In conclusion, the prevalence estimates of ASDs and autism are generally lower in China than in other countries worldwide. Further epidemiological studies with stringent methodology are needed to clarify the variation in prevalence.

64. Gao JH. Investigation on the hyperactive behavior and the effect factors among the preschool children in Zhongshan city. Maternal and Child Health Care of China. 2012;20:1365-69

65. Deng WQ. The research of prevalence and correlative factors of autism disorders among preschool in Hengyang [master thesis] (in Chinese). Nanhua Unversity. 2014