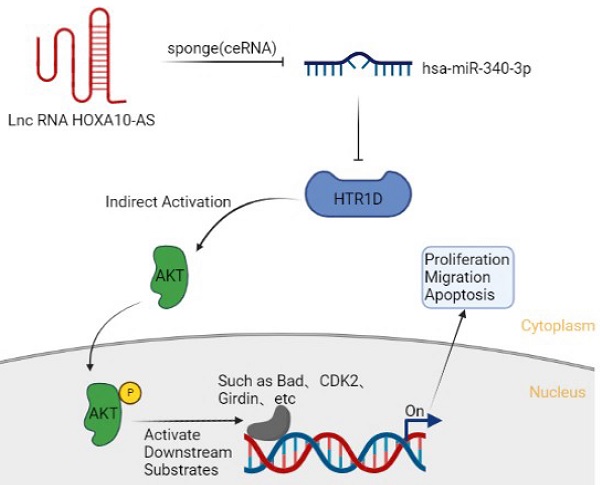 Competing endogenous RNAs (ceRNAs) are a newly discovered class of molecular regulators involved in many diseases, especially tumors. Therefore, exploration of the potential ceRNA regulatory network regarding the occurrence and development of pancreatic cancer will provide a new theoretical basis for its diagnosis and treatment. Based on the above background, we applied a bioinformatics approach to mine the public database The Cancer Genome Atlas (TCGA) and performed a series of subsequent molecular biology assays to confirm the hypothesis that HOXA10-AS/ miR-340-3p/HTR1D axis could modulate the malignant progression of pancreatic cancer. Here, our present study demonstrated that the expression level of HTR1D, positively correlated with the level of lncRNA HOXA10-AS and negatively associated with the level of miR-340-3p, was significantly increased in pancreatic cancer cell lines (PCs) compared with that in normal HPDE6-C7 cells. Knocking down HTR1D obviously inhibited the proliferation and migration of PCs and promoted apoptosis by upregulating p-AKT. Elevated miR-340-3p blocked the progression of pancreatic cancer by downregulating HTR1D. Lessened level of lncRNA HOXA10-AS reduced the sponging of miR-340-3p, resulting in an increase of miR-340-3p and a subsequent decrease of HTR1D to ultimately suppress the malignant biological behaviors of cancer. These data illustrated that the HOXA10-AS/miR-340-3p/HTR1D ceRNA axis acted a crucial part in the malignant biological behavior of pancreatic cancer in an AKT-dependent manner.