The Carassius auratus complex includes diploid triploid and polyploidy individuals from the family Cyprinidae and is distributed mainly in China, Japan and Russia [1, 2]. Diploid individuals belong to the species Carassius auratus whereas triploid and polyploidy individuals are from the subspecies Carassius auratus gibelio [3, 4]. Now they are also widely spread throughout Europe as an invasive species [5, 6]. Two different reproductive modes were revealed: allogynogenetic reproduction and gonochoristic reproduction [7-9]. In natural populations, the population structure is complex and there are diploid, triploid and polyploid individuals with the majority of individuals being triploid [5, 10]. The chromosome number of individuals from distinct natural populations are different, ranging from 100 to 200 [11]. The diploid crucian carp in China has 100 chromosomes, whereas the triploid gibel carp (or silver crucian carp) has 150 chromosomes or more [10, 12, 13]. The white crucian carp (C. auratus cuvieri) in Lake Biwa of Japan had 100 (diploid) or more chromosomes (triploid or tetraploid) [14]. Natural gynogenetic silver crucian carp is a unique triploid organism and reproduces clonally [15]. Therefore it could be an important model for studying the evolution of unisexual clonal lines.

Triploid organisms have been identified by various methods including analyzing the red blood cell size [7, 8], karyotyping [16, 17], flow cytometry [18] and isozyme analyses [19]. Although analyzing the red blood cell size and karyotyping are the most straightforward methods to assess ploidy level, they are time-consuming, labour-intensive and not able to differentiate different genotypes/clonal lines. Moreover, in some fish species karyotypes are extremely difficult to obtain due to the small and similar size of different chromosomes, their copious numbers, and/or the absence of suitable staining techniques [20]. Flow cytometry has been used to estimate ploidy level by assessing the total DNA content of cells in comparison with a known control. However, this method gives only an approximate estimation of the ploidy level [18] and measuring DNA content in cell is not only time-consuming, but also costly and labour-intensive.

The purpose of this study is to establish a molecular method to identify triploid individuals and clonal lines in the Carassius auratus complex for studying the evolution of unisexual triploid clonal lines.

DNA samples of 20 confirmed triploid silver crucian carp individuals from a wild population in Japan were obtained from Dr. Kenichi Ohara (Japan). The polyploidy levels of these individuals were determined by analyzing the red blood cell size using an existing method [7, 8]. Tissue and blood samples of 20 individuals were collected from two fish farms located in Jiangsu (14 individuals) and Zhejiang provinces (6 individuals), China. All twenty individuals from two farms were confirmed to be triploid by analyzing the red blood cell size. In addition, four confirmed diploid males and four confirmed diploid females collected from the Dayun River in Zhejiang province (China) were also used in this study. DNA was isolated from each fish using a method that we developed previously [28].

To understand the genetic composition of the Carassius auratus complex in the wild, we randomly collected 46 adult individuals from the Changshan River located in Zhejiang province, China. Sex of each fish was determined by checking gonads. Fin clips of all 46 individuals were collected and stored in 75% ethanol until DNA extraction. DNA was extracted using a existing method [28] and arrayed on 96-well plates for PCR.

Polymorphisms of 10 microsatellites in 94 individuals of silver crucian carp *

Briefly, amplification of DNA samples was performed in 25 μL volumes, each containing 1× polymerase chain reaction buffer (Finnzymes), 100 nM of each primer, 1.5 mM MgCl2, 50 μM of each dNTP, 0.5 unit of Taq polymerase (Finnzymes) and 10 ng of genomic DNA. PCR cycling conditions were as follows: an initial denaturation at 94°C for 2 minutes followed by 34 cycles of 30 s at 94°C, 30 s at 55°C, 30 s at 72°C, then a final extension step of 10 min at 72°C. Amplified fragments were separated on denaturing 8% polyacrylamide gels using the ABI 377 sequencer (Applied Biosystems). The fragment lengths of alleles were determined against the internal size standard GS-250-Rox (Applied Biosystems) using software GENESCAN and GENOTYPER (Applied Biosystems). Individuals with the same genotypes at all 10 loci were identified manually. The number of alleles, allele frequency, and expected and observed heterozygosity were calculated by direct counting. Genetic relatedness among individuals was estimated using the allele sharing index [29], where alleles were scored as either present (1) or absent (0). Phylogenetic trees based on NJ, ME and UPGMA were constructed using the default setting with software MEGA 4.0 [30].

All ten microsatellites were polymorphic in 94 individuals (Table 1). A total of 179 alleles were detected. The loci J01 and J04 were most polymorphic (25 alleles), while the locus J68 was least polymorphic (6 alleles). The observed heterozygosity (including di-allelic and tri-allelic heterozygosity) ranged from 0.692 to 0.978 with an average of 0.870 ± 0.03. At some loci, triploid individuals clearly showed three alleles (see examples in Figure 1).

Some electrophoretograms of genotypes at microsatellite loci J01, J42, J56 and J60 showing one, two and three alleles at single locus. The numbers at the base of peaks are the sizes of alleles in bp, while the scale bar at right side shows height of alleles indicating the intensity of fluorescent signals. 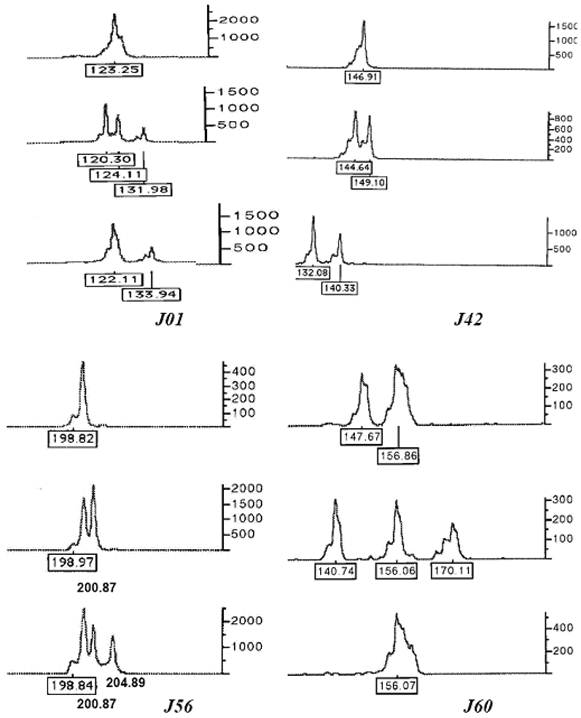 Characterization of a wild population in China

Forty-six individuals randomly collected from a wild population of the Carassius auratus complex in China were analyzed using 10 microsatellites. Among the 46 individuals, only six were males and were classified as diploids (Table 2). Among the 40 females, 36 (90%) were diagnosed as triploids and the remaining four were classified as diploids. In the 36 triploid individuals, three clonal lines were identified; one clonal line with four individuals, two lines each with two individuals. The overall heterozygosity was 0.87 ± 0.05 in 46 individuals (Table 2). The observed heterozygosity in diploid and triploid individuals was 0.81 ± 0.05 (n = 10) and 0.90 ± 0.04 (n = 36) respectively. 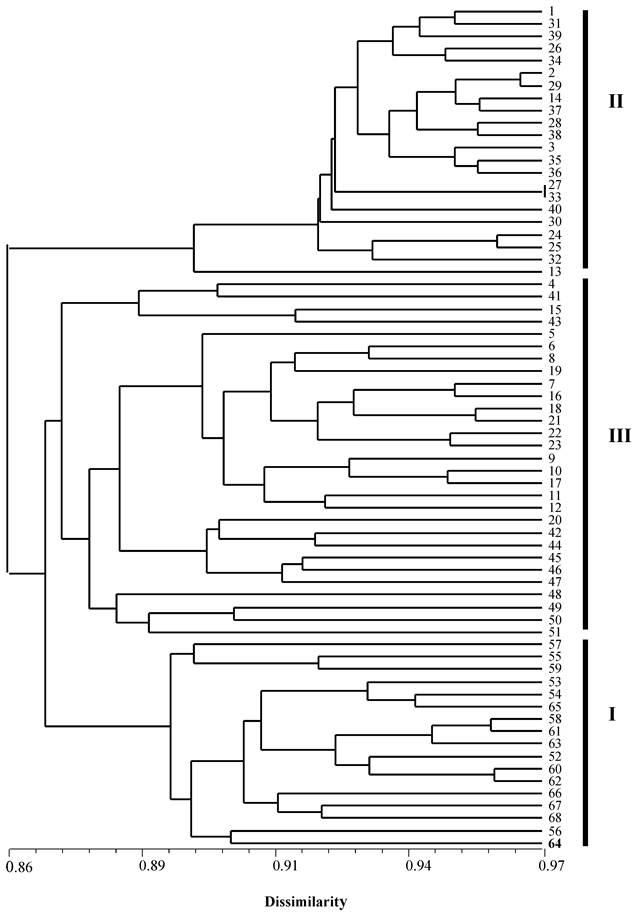 This study is supported by the internal fund of the Temasek Life Sciences Laboratory, Singapore. The authors would like thank Dr. Kenichi Ohara from Lake Biwa Museum, Japan for kindly supplying us tissue samples of 20 confirmed triploid individuals of Japanese sliver crucian carp. The authors thank Dr Mamta Chauhan for editing English of this paper.