Hydrogen (H2), the most abundant chemical element in the universe (constituting approximately 75% of the universe's elemental mass), is seldom regarded as an important agent in medical usage, especially as a therapeutic gas. However, many recent studies by our lab and other labs provided evidence that H2 gas has powerful therapeutic and preventive effects for many diseases [11,12,13]. Ohsawa et al. found that molecular H2 could selectively reduce cytotoxic reactive oxygen species, such as hydroxyl radicals in vitro and exert therapeutic antioxidant activity in a rat middle cerebral artery occlusion model in vivo [11]. Since hydroxyl is very strong oxidants that react indiscriminately with nucleic acids, lipids and proteins resulting in DNA fragmentation, lipid peroxidation and protein inactivation, they are also the main mediators of radiation damage [12]. We hypothesized and showed by experimental studies that H2 treatment could protect cultured cells and mice from radiation damage [12,13,14]. In those studies, we used a single high dose model to find that H2 is a novel protective gas on radiation induced injuries. Importantly, those previous studies also showed that H2-rich saline/water is safe, easy to administer and cost-effective [13,14].

In this study, we used a split dose radiation-induced thymic lymphoma model in BALB/c mice to test the potential role of H2 on radiation induced carcinogenesis in a method very similar to our previously studies [9,13,14].

Radiation induced thymic lymphoma model was described by many groups and our previous studies [4,5,9]. In detail, male wild-type BALB/c mice, 5-6 weeks of age, were purchased from Chinese academy of science (Shanghai, China) and A 60Co irradiator was introduced for total-body ionizing irradiation as described in our previous work [9,12,13,14,15]. Four weekly sub-lethal doses of 1.75 Gy gamma-ray irradiation were delivered to 5-6 week old BALB/c mice at a dose rate of 0.58Gy/min as described previously [9]. Only two groups were used in this study: the H2-rich saline group (H2 (+) group) or normal saline control (H2 (-) group) as described previously [13,14]. Themice from these two groups were intraperitonealy injected with H2-rich saline (H2 (+) group) or normal saline (H2 (-) group) 5 minutes before each irradiation respectively as we described detailed in our previous work [13,14].

We found that H2 treatment significantly increased the survival rate of mice 30 weeks' after split dose radiation (Figure 1A, P<0.05).This datum is consistent with our previous studies that H2 treatment could protect cultured cells and mice from radiation damage [12,13,14]. 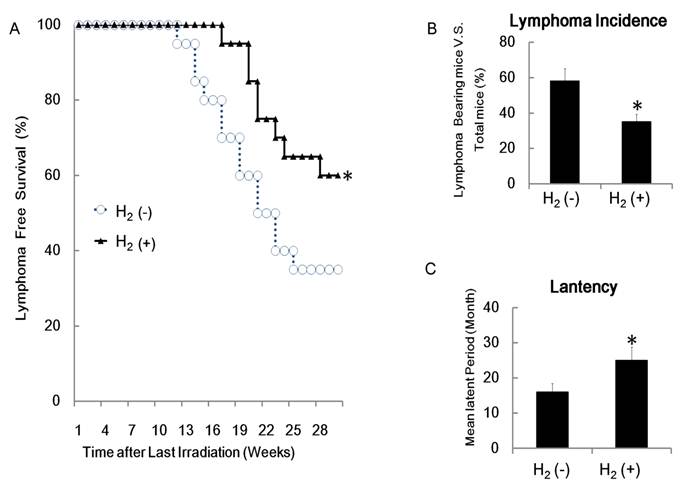 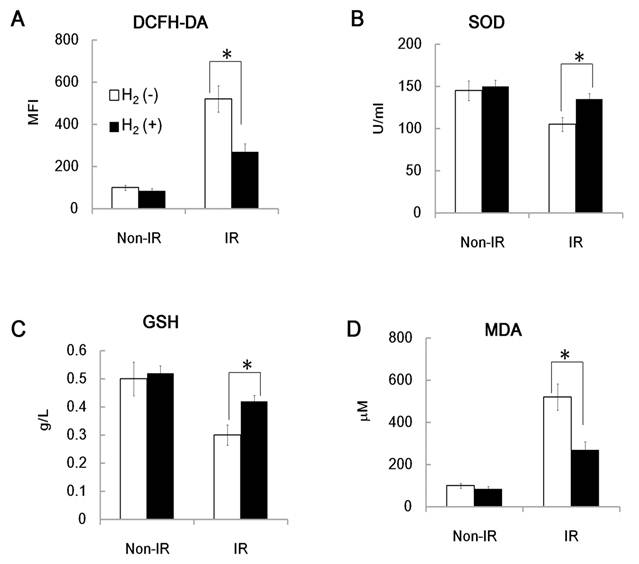 The detrimental effects of IR on biological tissues can be mediated via increased production of free radicals and reactive oxygen species (ROS) and the ROS system have been found to play important role in the induction of cancers [1,8,16].

To explore the potential role of ROS in H2 induced protection of radiation induced carcinogenesis, we used different methods to detect changes in intracellular and extracellular ROS levels in H2 treated mice and control mice 4h after the last irradiation [13]. Intracellular ROS levels in peripheral blood mononuclear cells (PBMC) from irradiated and control mice were assessed using FACS analysis with DCFH-DA (2′7′di-chlorofluorescein diacetate), which converts to highly fluorescent DCF in the presence of intracellular ROS. As shown in Figure 2A, ROS levels were much lower in the irradiated H2 group than in the irradiated control mice. Similar results were also found for ROS levels in extracellular serum. Serum SOD (Superoxide dismutase) and total GSH (Glutathione) concentrations at 4h after the last irradiation in the H2 group were significantly higher than that of the control group, while MDA (Malondialdehyde) concentrations in the H2 group were significantly lower than that of the control group (Figure 2B, 2C and 2D). These results indicate that the H2 pre-treated groups showed an increased antioxidant status, consistent with our previous studies that showed that H2 could reduce radiation-induced free radical damage to DNA [13,14].

To the best of our knowledge, this may be the first report describing treatment with H2, which reduced the risk of radiation-induced carcinogenesis in the BALB/c mouse model. While the therapeutic effectiveness of H2 treatment on radiation carcinogenesis needs further study, this work provides some novel experimental evidence for the use of H2 in radiation therapy. Since it is safe, easy to administer and cost-effective, it could not only protect against radiation induced death [12,13,14], but also attenuate the rate of radiation induced carcinogenesis.

We thank Dr. Cindy Savage and Trip Barthel M.A for help editing of the manuscript.