Mycobacterium tuberculosis (MTB) remains one of the most significant human pathogens since its discovery in 1882. An estimated 1.5 million people died from tubercle bacillus (TB) in 2006, and globally, there were an estimated 9.27 million incident cases of TB in 2007. Glyoxylate bypass pathway occurs in a wide range of pathogens and plays a key role in the pathogenesis of Mycobacterium tuberculosis. Isocitrate lyase (ICL) can catalyses the first step of this pathway, and reversibly cleaves isocitrate into succinate and glyoxylate. So, ICL may represent a good drug target for the treatment of tuberculosis. ICL was cloned, expressed, and purified, and a high-throughput screen (HTS) developed to screen active molecule from a mannich base compounds library for inhibition of ICL. This assay had signal to noise (S/N) of 650.6990 and Z' factor of 0.8141, indicating that the assay was suitable for HTS. Screening of a collection of 124 mannich base compounds resulted in the identification of one mannich base compound, which has a significant inhibitory activity. So, a new family of compound was first reported to inhibit the activity of Mycobacterium tuberculosis ICL. This family of compound might offer new avenue to explore better anti-tuberculosis and fungi drugs.

ICL existed extensively in organisms such as bacteria, nematodes, fungi and plants [3]. No human being homologs have been documented [3]. This made ICL a promising target for broad spectrum antibiotics. ICL is essential for Mycobacterium tuberculosis growth in activated macrophages and persistence in macrophages and mice [4], and virulence factors of Candida albicans, Rhodococcus equi [5-7].

ICL was intensively pursued as drug target to combat tuberculosis. Tuberculosis was once held at bay by the introduction of antibiotics and there was a widespread optimism that it is just a matter of time to eradicate them. However, several factors, including the emergence of drug resistance, multi-drug resistance and even extensive resistance, co-infection with HIV and poor compliance of patients largely due to the lengthy treatment regimen, result in the re-establishment of tuberculosis as a major scourge of public health. And this once optimism was relentlessly pulverized. Intense investigations on ICL inhibitor have revealed variety of drug leads promising to proceed into next stage[8]. Many have put on a premium on ICL as a priority target,such as WHO (World Health Organization) [9], GSK and Rockefeller University[10]. ICL expression was reported to be highly spatiotemporal and conventionalscreening might miss some promising leads [11].

Β-amino ketones are the key intermediates for the synthesis of lots of drugs and natural products, and are also important bioactive substances [12], with function of anti-inflammatory [13, 14], anti-cancer [15-18], anti-bacterial [18, 19], anti-virus, sedation, analgesia, hypotension, edema suppression and anti-coagulation. more diverse activities were reported, such as: anti-androgen[20], insulin sensitizer, excited peroxisome proliferator-activated receptors (PPARs), inhibit cholesterol acyltransferase (ACAT), and promote high-density lipoprotein receptor (SRBI) expression and reverse tumor multi-drug resistance, such as pharmacological activity, can be used as the prevention and treatment of insulin resistance-related diseases, diabetes, obesity, atherosclerosis, fatty liver, hyperlipidemia, inflammation, tumor diseases, such as multi-drug resistance of the drug/precursor material [21-24]. Our working hypothesis is these compounds might be active against ICL.

A previously proved high-throughput screening model for ICL inhibitors in our lab [25] was employed to screen new ICL inhibitors from the mannich base compounds library. Compound Ydcm67 (Fig.1) demonstrated a strong inhibitory activity to ICL.

Cloning and Expression of Recombinant ICL

Using Buffer A (50mM NaH2PO4, 300mM NaCl, 10mM imidazole, pH 8.0) as the lysis buffer, and the lysate was centrifuged at 13,000 g for 30 min at 4℃. The cell extract was applied to Ni-sepharose (Amersham Biosciences) and fractions with ICL activity were collected and stored at 4℃ for 2 months with no loss of activity.

Isocitrate lyase activity was determined at 37℃ by measuring the formation of glyoxylate-phenylhydrazone in the presence of phenylhydrazine and isocitrate lyase at 324nm based on the method described [28]. The reaction buffer include 50 mM potassium phosphate, 4 mM MgCl2, 4 mM Phenylhydrazine HCl, 12 mM Cysteine HCl, pH 7.0, and it was kept on ice until use. The mixture of 188 μl reaction buffer and 2 μl recombinant ICL solution was incubated at 37℃ for 30 min, and the change of absorbance at 324nm was measured after the addition of 10 μl isocitrate. The Km and Vmax was gained using the Hanes-Woolf plot [29], with the slope = 1/Vmax and the intercept on the x axis = -Km.

Preparation of Mannich Base Solution

The mannich base compounds were dissolved in DMSO to obtain final concentrations of 1.0 mg/ml, and stored at -20℃.

The test mannich base solutions were diluted on the mother plate (1.0 mg/ml in 100% DMSO), and 10 μl of each extract solution was added into each well (equivalent to a final concentration of 0.05 mg/ml) of a 96-well plate. The A1, B1, and C1 represent the background, negative control and positive control (0.05 M oxalic acid) respectively. Subsequently, 178 μl reaction buffer, 10 μl compound solution, 2 μl recombinant protein ICL solution, and 10 μl isocitrate solution (0.04 M) was added to each well, and the absorbance was measured as described above. The inhibition >50% of extracts were picked up for the following screen to reconfirm the inhibition, and the screen assay was done in duplicate. To determine the IC50, five concentrations were used.

The activity detection of ICL was based on the absorbance at 324 nm, and the activity was calculated by the change of absorbance (experimental values control values). The signal to noise (S/N) and screening window coefficients (Z' factor) were calculated as described by Zhang, et al[30] to evaluate the suitability of the model for screening. Data that were detected from eight wells have been used to calculate the S/N and Z' factor.

Screening and Identification of Recombinant Plasmid

Recombinant plasmid was isolated from clones growing on LB medium supplement with kanamycin (50 μg ml-1), and found to contain an intact copy of the 1.3-kb DNA by two enzymes digestion (Fig.2). The sequence result showed that no mutations were discovered, confirming the construction of recombinant plasmid pET28a-ICL. 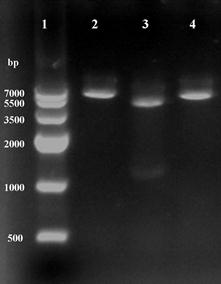 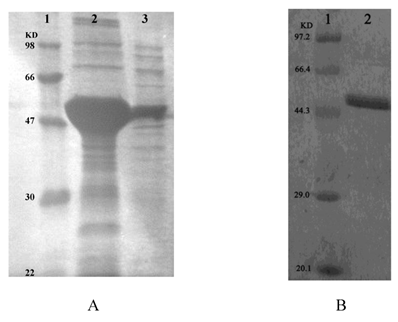 The recombinant enzyme activity was 21,500 U/L. Using the Hanes-Woolf plot, the Km and Vmax were determined to be 219 mM and 3.127 mM/min/mg, respectively. The results showed that the production of glyoxylate-phenylhydrazone was linear with the time of incubation up to 20 min (Fig.4) and with the amount of protein in the assay at 2mM concentration of isocitrate. Therefore, the optimized condition of ICL for assay was fixed at 2μl enzyme solution (approximately equal to 215 U/L) in each well, and an incubation time of 20 min at 37℃ was used.

Isocitrate lyase activity as determined by the assay as a function of time. 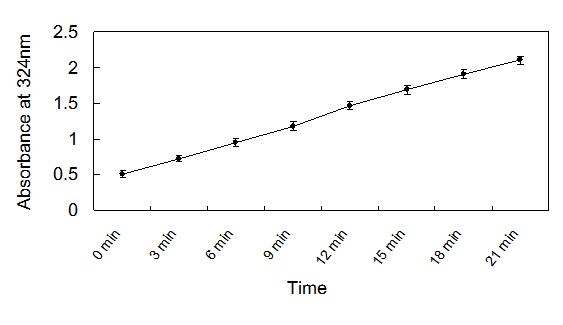 As described in Materials and Methods, the signal to noise (S/N) and Z' factor was calculated from the control wells of screening plates to determine the suitability of the assay for high throughput screening. The Z' factor reflects the dynamic range as well as the variation of the assay and is a useful tool for assay comparisons and assay quality determinations[30]. The assay exhibits S/N of 650.6990 and Z' factor of 0.8141 (Table 1).

a: M Signal, mean of signal

b: M Background, mean of background

In this assay, 124 mannich base compounds were tested. All compounds were evaluated in the assay at a final concentration of 0.05 mg/ml. Inhibition of more than 50% was defined as a hit. We found Ydcm67 has a significant inhibitory activity (Table 2).

a: M Background, mean of background

b: M Negative Control, no inhibitor 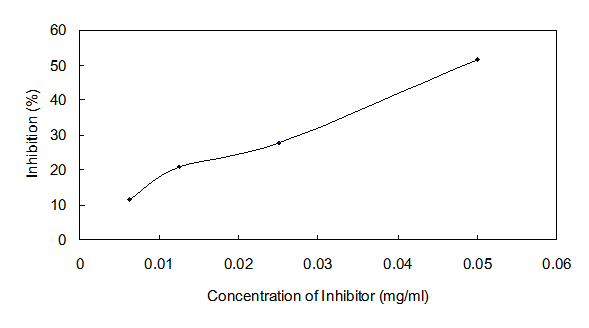 To accommodate the assay described to HTS, the optimization of the assay was performed. The incubation time was changed to 30 min to make full interaction between enzyme and inhibitors, and the changeable values of the absorbance at 324nm in 20 min was used to represent the activity of the ICL. Additionally, 2 mM isocitrate and 0.043U ICL at a final concentration were used in the assay. 124 mannich bases were screened in this assay, and one of them, Ydcm67, exhibited the inhibition of ICL activity, the IC50 value of Ydcm67 to ICL was 0.0535 mg/ml, and resulting in a total hit rate of 0.81%. Typically, Z' factor >0.5 and S/N >10 are considered favorable for high throughput screening. Our assay exhibiting S/N of 650.6990 and Z' factor of 0.8141 and the reproducibility of positive compounds indicates that it is suitable for high-throughput screening.

Simulated 3D structure of Ycdm67 (Fig.7A) generated via ChemSketch demonstrates that this molecule might function by wedging in the active site of ICL (Fig.7B).

This is the first report that a high-throughput screening assay was developed to screen the mannich base, and one hit is active against ICL. However, in vivo data are needed to evaluate the compound's efficacy and provide structure-activity relationship information. 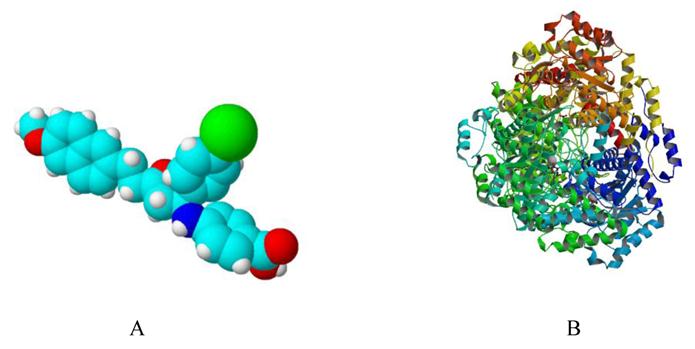 16. Yang D, Fan L, Liu H. et al. A class of compounds that has the Mannich base stucture and its applications in the preparation of the treatment and/or prevention of leukemia drug. Chinese patent application No.200710092667.9. 2007

18. Kocabalkanli A, Ates O, Otuk G. Synthesis of Mannich bases of some 2,5-disubstituted 4-thiazolidinones and evaluation of their antimicrobial activities. Arch Pharm (Weinheim). 2001;334:35-9

29. Hanes C.S. Studies on plant amylases: The effect of starch concentration upon the velocity of hydrolysis by the amylase of germinated barley. Biochem J. 1932;26:1406-21