Pathological cardiac hypertrophy is a major cause of morbidity and mortality of cardiovascular diseases all over the world [1-3]. Ventricular myocardium in response to a variety of pathologic stimuli such as adrenergic overactivation will undergo a hypertrophic growth characterized by the increased cell size and activation of numerous fetal cardiac genes so as to compensate for the decreased function of injured hearts [4]. However, sustained myocardial hypertrophy can result in the functional decompensation, electrophysiological remodeling, cardiac fibrosis, sudden death or heart failure [5]. The calcineurin/nuclear factor of activated T cells (NFATc) signaling pathway has been shown to play an essential role in pathological cardiac hypertrophy [1, 3]. Accordingly, preventing the activation of calcineurin/NFATc signal pathway is suggested as an important strategy for the treatment of myocardial hypertrophy.

Danshen, the dry root and rhizome of Salvia miltiorrhiza Bge (Labiatae), was widely used in therapeutic remedies in China and other countries [6]. Many clinical studies indicated that Danshen and its preparations could treat coronary artery diseases, myocardial infarction, liver malfunction, etc [6-9]. Tanshinone IIA (Tan IIA) is isolated from Salvia miltiorrhiza and one of the main ingredients of Danshen for cardioprotective effects [10]. Tanshinone IIA was shown to exert beneficial effects on cardiovascular system with minimal reported side effects [11-15]. For example, Tanshinone IIA prevented endothelial cell damage through its anti-oxidant effect [11-12] and protected cardiomyocytes against oxidative stress-triggered damage and apoptosis [13]. Our previous studies also uncovered that Tanshinone IIA protected rats against sudden cardiac death due to lethal arrhythmias via repression of microRNA-1. However, little is known about whether Tanshinone IIA can prevent ISO-induced cardiac hypertrophy. The present study is aimed to determine the preventive role of Tanshinone IIA in ISO-induced cardiac hypertrophy and to clarify its underlying mechanisms.

Isolation and culture of cardiomyocytes

The procedure to culture neonatal rat ventricular myocytes (NRVMs) is just as described previously [16]. Briefly, the hearts of neonatal rats were rapidly removed. Both ventricles were cut into l to 2 mm3 and dissociated in 0.25% trypsin at 37 °C for 1-2 min. Cell suspensions were shifted out and neutralized with cell culture medium. Cardiac tissues were trypsinized until the tissues disappeared and cell suspensions were collected. Then all suspensions were pelleted by centrifugation at 2000 rpm for 180 s. The isolated cells were then resuspended in DMEM (Hyclone Laboratories) supplemented with 10% fetal bovine serum (Gibco) and penicillin (100 U/ml)/streptomycin (100 U/ml), transferred into culture flask and cultured at 37 °C in humid air with 5% CO2. After 90 min for fibroblast adherence, neonatal cardiomyocytes were plated into 6-well plate at a density of 3×105 cells per well. After 48 h culture, NRVMs were treated by ISO for 48 h in the absence or presence of Tanshinone IIA.

Cultured cardiomyocytes were fixed with 4% paraformaldehyde for 0.5 h. Then the cell membrane was penetrated by 0.4% Triton X-100 for 1h and blocked by goat serum for 1 h. Followed by anti-sarcomeric actin antibody (Sigma, St. Louis, MO), at 4°C overnight, subsequently incubation with FITC-conjugated goat anti-mouse antibody for 1h. Immunofluorescence was analyzed under a fluorescence microscope (Nikon 80i). Cell surface was measured by Image-Pro Plus Data Analysis Software. Quantification of cell surface area by measuring 60 random cells from three experiments, and the average value was used for analysis.

Cultured cells were stained by Fluo-3/AM at 37 °C for 45 min, and then washed with standard external solution contain Ca2+ for 3 times. Fluorescent changes of Fluo-3/AM-loaded cells were detected using laser scanning Confocal microscope (Olympus FV-300) with 488 nm for excitation from an argon ion laser and 530 nm for emission. The fluorescent intensities before (FI0) and after (FI) KCl 30 mM administration were both recorded. Qualitative changes in the increase of intracellular Ca2+ level were inferred from the ratio of FI/FI0.

The protein samples were extracted from the whole cells with the procedures as previously described [3]. Cardiac cells were also lysed with standard sample buffer, and then to broke the cells by ultrasound. For deliver protein sufficiently, the mixed liquor was kept on the ice for 30 min. The mixed liquor was centrifuged and then the supernatant was collected. Protein concentration was determined in the supernatant using ABC as recommended by the manufacturer. After boiling the samples for 5 min, the protein samples were fractionated by SDS-PAGE (10%-15% polyacrylamide gels) and transferred to PVDF membrane (Millipore, Bedford, MA). The membranes were blocked with milk powder at room temperature for 2 h. The membranes were incubated with primary antibodies ANP, BNP, β-MHC (Santa Cruz Biotechnology Inc. USA), calcineurin (Santa Cruz Biotechnology Inc. USA) and NFATc3 (Santa Cruz Biotechnology Inc. USA) at 4 °C overnight, washed, and incubated with a secondary rabbit or mouse polyclonal and purchased from Santa Cruz Biotechnology for 1 h at room temperature. Western blot bands were quantified using Odyssey v1.2 software by measuring the band intensity (area×OD) for each group and normalizing to GAPDH as an internal control.

All experimental data were presented as the mean ± SEM. ANOVA or t-test was used to compare mean values using SPSS 13.0 software. Values of p < 0.05 were considered statistically significant. 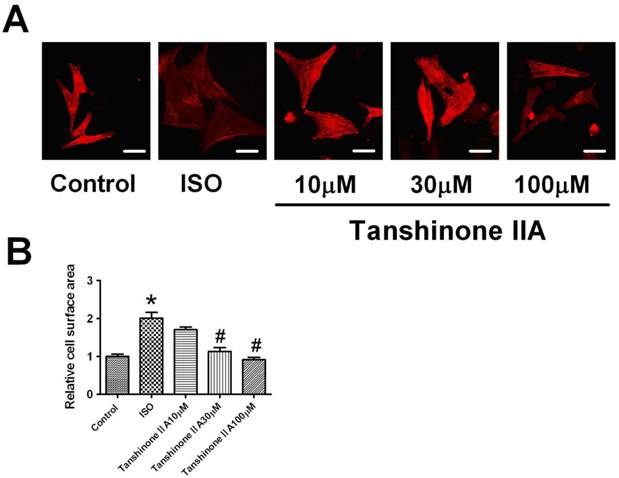 Tanshinone IIA reversed ISO-induced the increase of ANP, BNP and β-MHC at mRNA and protein levels

Effects of Tanshinone on ISO-induced enhancement of intracellular calcium transient 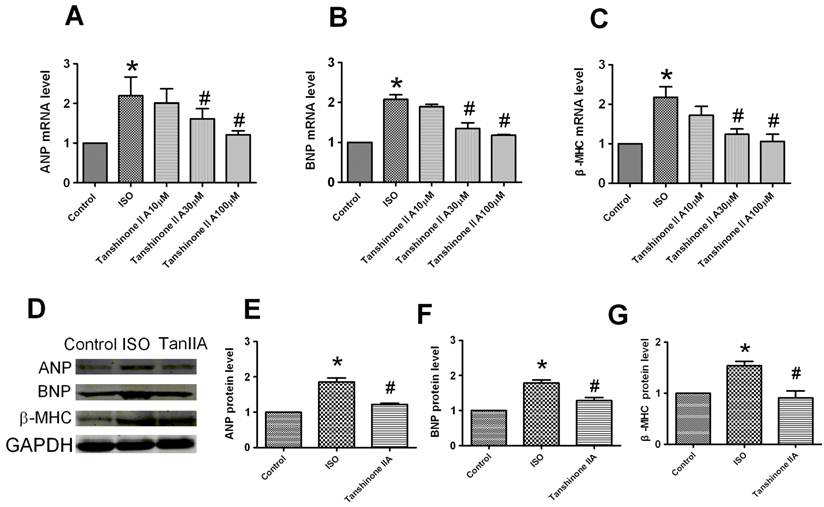 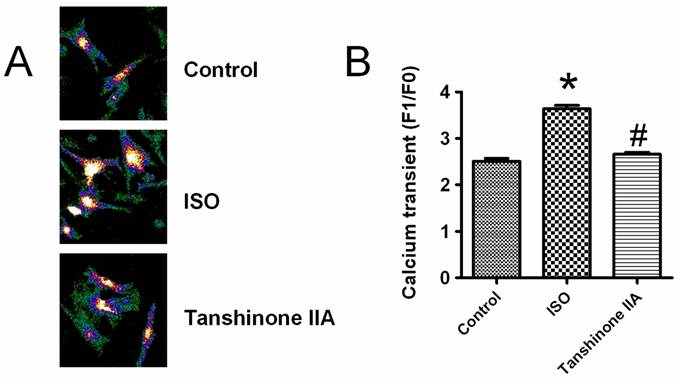 Tanshinone IIA inhibited the upregulation of calcineurin and NFATc3

The present study mainly revealed that Tanshinone IIA could protect against cardiac hypertrophy induced by ISO by inhibiting calcineurin/NFATc3 signal pathway, which yield new understanding of the therapeutic effects of Tanshinone IIA on pathological myocardial remodeling.

Danshen is extracted from the dried root or rhizome of Salvia miltiorrhiza Bunge and has been widely used in the treatment of cardiovascular diseases such as myocardial infarction and myocarditis [11-15]. Danshen-derived compounds have many important pharmacological effects in basic experiments and clinic, such as anti-tumor, immunoloregulation and cardioprotective effects, scavenge lipid radicals and so on [7, 9-10, 24]. Recently, our studies also showed that Tanshinone IIA reversed cardiac potassium channel remodeling after heart infarction through depressing SRF-induced miR-1 overexpression [15]. Previous reports also revealed that angiotensin II-induced hypertrophic growth in cardiomyocytes was markedly attenuated in the presence of Tanshinone IIA through inhibiting the rise of intracellular calcium and c-jun expression [14], that indicates ISO and angiotensin II caused cardiac hypertrophy through different signaling pathway. Moreover, it was also demonstrated that the blockage of Ang II by losartan and quinapril could not prevent ISO-induced cardiac hypertrophy [25]. Thus, in this study, we aimed to investigate the effects and mechanisms of Tanshinone IIA on ISO-induced cardiac hypertrophy.

We can confirm that there are some limitations of this study as followed. First, we just detected the expression of total NFATc3 and did not investigate the translocation of NFATc3 from cytoplasmic to nucleus though the Calcineurin/NFATc3-dependent pathway that has been confirmed in previous studies [28]. Second, inhibitors or siRNA technique was not used in this study that will be another evidence to demonstrate that Ca2+/Calcineurin/NFATc3 pathway is involved in the regulation of ISO-induced cardiac hypertrophy.

Taken together, this study investigated the therapeutic effects of Tanshinone IIA on myocardial hypertrophy induced by ISO. We revealed for the first time that Tanshinone IIA was capable of preventing ISO-induced hypertrophic growth in cardiomyocyte, which is attributed, at least partially, to its inhibition of Ca2+/Calcineurin/NFATc3 pathway. These findings raise the possibility of developing Tanshinone IIA as a therapeutic drug for cardiac hypertrophy.

The authors declare no conflict of interests.