Steroid receptor coactivator-3 (SRC-3) is a member of the p160 steroid receptor coactivator family. It was discovered initially to be amplified in breast cancer in 1997 and so was named amplified in breast cancer 1 (AIB1) [1]. SRC-3 is also known as nuclear receptor coactivator-3 (NCoA-3), receptor associated coactivator-3 (RAC3), activator of thyroid hormone and retinoid receptor (ACTR), thyroid hormone receptor activating molecule-1 (TRAM1), and p300/CBP interacting protein (p/CIP). The SRC-3 gene is located on chromosome 20q12-12. The SRC-3 protein is approximately 160 kDa and contains three basic structural domains, consistent with the other two SRC family members (SRC-1 and SRC-2). The N-terminal basic helix-loop-helix-Per/ARNT/Sim domain (bHLH-PAS) mediates the interaction between SRC-3 and other DNA-binding proteins. The receptor-interaction domain (RID) contains three LXXLL motifs, by which SRC-3 binds to the ligand-activated nuclear receptors. The C-terminal domain contains two intrinsic transcriptional activation domains, AD1 and AD2, by which SRC-3 interacts with histone acetyltransferases and histone methyltransferases, respectively. The C-terminal domain of SRC-3 also has histone acetyltransferase activity. The function of SRC-3 as a transcriptional coactivator for nuclear hormone receptors has been described in detail previously [2, 3]. Phosphorylated SRC-3 binds to ligand-activated nuclear receptors via its RID, and then recruits the histone acetyltransferase p300/CBP through AD1. This transcriptional complex subsequently alters chromatin structure and facilitates the transcription of the nuclear receptor target gene. In addition to its role as a nuclear receptor coactivator, SRC-3 is also a transcriptional coactivator for other transcription factors, including E2F1 [4], AP-1 [5], NF-κB [6], STAT6 [7] and PEA3 [8]. Moreover, SRC-3 acts as a translational repressor to regulate proinflammatory cytokine mRNA translation [9].

The correlation between SRC-3 and cancer has been widely discussed since SRC-3 was determined to be amplified in breast cancer in 1997 [1]. Initially, SRC-3 was thought to be involved in the proliferation of hormone-dependent cancers, such as ER-positive breast cancer, primarily by acting as transcriptional coactivator for nuclear receptors such as ER. However, more and more studies have shown that hormone-dependent cancers are not the only type of cancer that SRC-3 affects, and SRC-3 has roles in cancer other than being as a nuclear receptor coactivator. Dysregulation of SRC-3 in several hormone-independent cancers correlates with pathological factors and clinical prognosis. Both in vivo and in vitro studies show that SRC-3 affects many aspects of cancer in ways independent of nuclear receptor signaling. The SRC-3 transgenic mice model shows that SRC-3 is a bona fide oncogene which can induce tumorigenesis in many tissues. The focus of this review is to summarize roles of SRC-3 in cancer other than a nuclear receptor coactivator.

The altered expression of SRC-3 in human cancers is summarized in Table 1. These data demonstrate that dysregulation of SRC-3 occurs in hormone-dependent as well as hormone-independent cancers. Moreover, SRC-3 dysregulation is correlated with pathological factors and prognosis of hormone-dependent as well as hormone-independent cancers. These observations indicate that SRC-3 has a key role in the tumorigenesis and progression of several different cancers, and not just a coactivator of nuclear hormone receptor.

To analyze the relationship between SRC-3 and cancer, researchers generated several mouse models of cancers in which SRC-3 is depleted. The results showed that SRC-3 knockout significantly inhibited carcinogen-induced tumorigenesis by inducing down-regulation of other signaling pathways, as well as nuclear receptor signaling. For example, in two different mouse models, SRC-3 knockout totally inhibited the mouse mammary tumor virus-v-Ha-ras (MMTV-v-Ha-ras) or chemical carcinogen 7, 12-dimethyl-benz[a] anthracene (DMBA)-mediated mammary gland tumorigenesis [44, 45]. The down-regulation of the IGF-I signaling detected in both of these models is considered one reason, as is the down-regulation of ER signaling. Moreover, SRC-3 depletion led to the inhibition of the oncogene MMTV-HER2/neu induced mammary gland tumorigenesis in another mouse model, in which HER-2 phosphorylation was suppressed [46]. More recently, it was reported that SRC-3 knockout also prevented the initiation of thyroid cancer induced by dominant-negative mutant thyroid hormone receptor-β (TR-β), and multiple signaling pathways, but not nuclear receptor signaling, were disrupted in this mouse model [47].Taken together, these results indicate that SRC-3 contributes to the tumorigenesis induced by several different carcinogens.

To detect whether SRC-3 overexpression could induce tumorigenesis in the mammary gland, Torres-Arzayus and colleagues [48] established the first SRC-3 transgenic mouse model in 2004. In this model, tumors were induced in the mammary gland (48%). Surprisingly, tumors were also found in the pituitary (42%), uterus (18%) and lung (18%). Moreover, 16.7% of the mammary gland tumors were ERα-negative. Further studies revealed that activation of IGF-I signaling was enhanced in this SRC-3-tg mouse model, indicating that SRC-3 induced tumorigenesis by up-regulating IGF-I signaling. More recently, the same group developed another estrogen receptor signaling-eliminated SRC-3 transgenic mouse model by two methods, ovariectomy (ovx) and ERα null mutant [49]. In both groups, ectopic SRC-3 overexpression still induced tumorigenesis in lung, pituitary, skin, and bone tissues. Meanwhile, in the ovx group, although the ovariectomy attenuated estrogen receptor signaling and inhibited mammary gland development, some mice still developed mammary hyperplasia and ductal carcinoma. Taken together, the data from these two SRC-3 transgenic mouse models strongly indicate that SRC-3 triggers tumorigenesis through either other nuclear receptor signals or in a nuclear receptor signaling-independent manner, although the details of the mechanism are not fully understood. 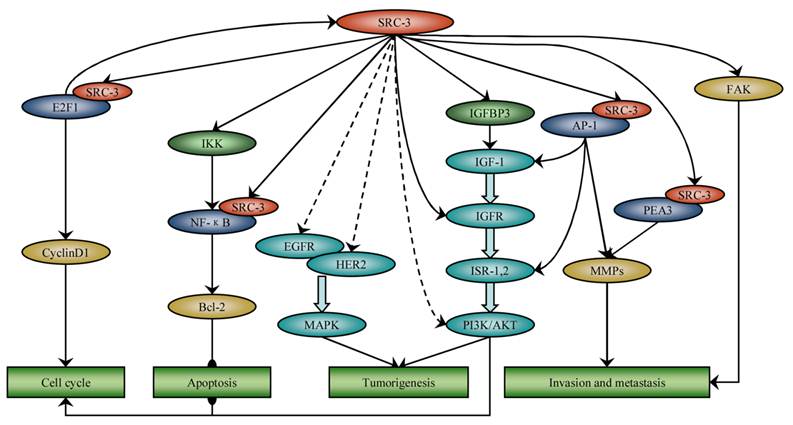 Cancer is considered to be a disease of the cell cycle, and compromised cell cycle control is detected frequently in several cancers [50]. There is evidence that SRC-3 may promote the cancer cell cycle. For example, SRC-3 overexpression maintained the S phase cell number in fulvestrant-treated breast cancer cell line T47D [4]. In contrast, the SRC-3 stable knockdown by siRNA decreased S phase cell number and increased G1 phase cell number both in human embryonic lung fibroblast and HCC cell lines [35, 51]. Moreover, SRC-3 depletion induced a significant increase in G1/G0 phase cells and a decrease in G2/M phase cells in TR-β-induced thyroid cancer mouse model [47]. Another proof was that SRC-3 nuclear translocation was coincident with the G1/S phase transition of cancer cell [51, 52].

Other research examined the mechanism by which SRC-3 modulates cell cycle control in cancer cells. One group found that SRC-3 acted as a transcriptional coactivator for the G1/S phase transition-associated transcription factor E2F1, and enhance the transcription of the E2F1 target genes, which are mostly G1/S cycle transition-related proteins [4, 51]. Therefore, SRC-3 dysregulation eventually led to cell cycle activation through E2F1 signaling. This conclusion is supported by the fact that SRC-3 overexpression induced proliferation and transformation of the ER-negative human mammary epithelial cell line MCF10A in an E2F1-dependent manner [51]. Interestingly, other studies show that SRC-3 may promote its own transcription with E2F1 [53, 54]. This positive feedback regulatory loop may enhance the influence SRC-3 exerted on cell cycle control. In addition, SRC-3 also influenced cell cycle control through activation of the Akt signaling pathway. For example, SRC-3 inhibited cell cycle inhibitor p21Cip1/Waf1 expression by activating Akt signaling in HCC cells [35]. Taken together, these data demonstrate that SRC-3 is involved in cell cycle control-related signaling. The dysregulation of SRC-3 may disturb normal cell cycle progression and promote cancer initiation and proliferation.

Quite a few studies have been performed on the mechanism of SRC-3 regulating the IGF-I signaling in cancers. SRC-3 can bind to the transcription factor AP-1 and enhance AP-1-mediated transcription of IGF-I and IRS-1 [5]. IGF-binding protein 3 (IGFBP3) inhibited the degradation of serum IGF-I by forming a complex with IGF-I [60]. A recent study showed that SRC-3 could affect the IGF protein level through regulation of IGFBP3 expression [61]. In this study, mutation of the phosphorylation sites of SRC-3 increased IGF-I expression by up-regulating IGFBP3, and resulted in tumorigenesis in the mouse liver. These results can account partly for the association between SRC-3 and IGF-I signaling. However, the mechanism by which SRC-3 modulates the expression and activation of IGF-I signaling components, in particular the activation of Akt, needs further exploration. Collectively, the above results indicate that dysregulation of SRC-3 influences the expression and activation of IGF-I signaling components.

EGF signaling is important for the initiation and progression of cancer [62]. Clinical studies showed that SRC-3 overexpression correlated with expression of the EGFR family member HER2 in breast cancer specimens, and the expression of both of these proteins correlated with shorter survival and primary tamoxifen resistance in breast cancer patients [13, 20]. A recent in vitro study showed that endogenous SRC-3 knockdown by siRNA in lung, pancreatic and breast cancer cell lines reduced EGF-mediated phosphorylation of EGFR and HER-2, and thereby inhibited the activation of EGF signaling [63]. As a result, cancer cell proliferation was inhibited. An in vivo study showed that SRC-3 depletion completely inhibited mammary tumorigenesis induced by the oncogene MMTV-HER2/neu [46]. Further studies revealed that SRC-3 depletion strongly prevented HER-2 phosphorylation and thus inhibited the HER2-induced activation of EGF/MAPK signaling. Although neither of these studies thoroughly elucidated the mechanism by which SRC-3 regulate EGFR and HER2 phosphorylation, they still confirm that SRC-3 regulates EGF signaling.

There have been many studies on the mechanism by which SRC-3 regulates cancer invasion and metastasis. Some studies focused on the correlation between SRC-3 and matrix metalloproteinases (MMPs). One study found that SRC-3 stimulated MMP7 and MMP10 expression in ER-negative MDA-MB-231 breast cancer cells by acting as coactivator for transcription factor AP-1 [78]. Another study found that SRC-3 promoted MMP2 and MMP13 expression in LNCaP prostate cancer cells by coactivating PEA3, an Ets transcription factor family member, as well as AP-1 [77]. In accordance with the in vitro studies, an in vivo study also demonstrated that SRC-3 enhanced MMP2 and MMP9 expression by functioning as a transcriptional coactivator for PEA3 [8]. In addition to regulating the expression of MMPs, SRC-3 also was shown to activate focal adhesion kinase (FAK) signaling, and thus enhance cell motility, which is critical to the cancer invasion and metastasis. A study showed that SRC-3 promoted FAK phosphorylation and thus induced tumor cell migration [77]. More recently, another study showed that SRC-3Δ4, a nuclear localization signal (NLS)-deleted isoform of SRC-3, could function as an adaptor protein for signal transmission from EGFR to FAK [80]. Taken together, the above studies demonstrated that SRC-3 promotes cancer invasion and metastasis by mechanisms other than nuclear receptor signaling.

Accumulating evidence indicates that the role of SRC-3 in cancer is more than as a nuclear receptor coactivator. Clinical investigations showed that SRC-3 is not only associated with hormone-dependent cancers. In the SRC-3-tg mouse model, SRC-3 ectopic overexpression induced tumorigenesis in several organs, even when a prototypical nuclear hormone receptor signaling is eliminated. In contrast, SRC-3 knockout in mice inhibited tumorigenesis induced by multiple different carcinogens. Both in vitro and in vivo studies demonstrated that SRC-3 is involved in many cancer processes through several mechanisms, in particular the nuclear receptor-independent signaling. SRC-3 controlled cell cycle progression by coactivating E2F1, up-regulated IGF-I and EGF signaling, inhibited apoptosis through activation of NF-κB and Akt signaling and promoted invasion and metastasis by coactivating AP-1 and PEA3 and activating FAK.

A recent study showed that SRC-3 deficiency reduced apoptosis by up-regulating NF-κB signaling in T and B lymphocytes, and eventually lead to lymphoma [81]. This indicated that the mechanisms independent of nuclear receptor signaling by which SRC-3 is involved in cancers is complex and requires further investigation in the future. All of the above data demonstrate that SRC-3 has roles in cancer initiation and progression other than being as a nuclear receptor coactivator. Therefore, SRC-3 may be an attractive target of cancer therapy.

14. Bouras T, Southey MC, Venter DJ. Overexpression of the steroid receptor coactivator AIB1 in breast cancer correlates with the absence of estrogen and progesterone receptors and positivity for p53 and HER2/neu. Cancer Res. 2001;61:903-7

68. Pajak B, Orzechowski A. [FLIP--an enemy which might lose the battle against the specific inhibitors of translation]. Postepy Hig Med Dosw (Online). 2005;59:140-9