Tuberculosis (TB) is one of the world's most serious public health threats. Over the past several years, China is most profoundly affected by TB. Each year, the new cases of TB account for 18% of the world's population [1]. Although about one third of the world's population is thought to be infected with Mycobacterium tuberculosis (MTB), only 5-15% of people develop clinically active TB during their lifetime [2]. Some evidence suggests that certain genetic factors may be involved in innate immunity and play important roles in susceptibility to TB at the individual level. Genetic studies showed that both genes and environmental factors are associated with the pathogenesis of TB [3, 4]. Therefore, it is important to identify genes that mediate susceptibility to TB.

TB is an infectious disease caused by MTB, which mainly lives on the monocyte/macrophage system. Cellular immunity is involved in resistance to infectious disease caused by MTB. Activated macrophages perceive the invasion of MTB and lead to active and passive immune response, such as, antigen presenting, T cell activation, B cell activation, the production of interleukin (IL), interferon (IFN) and transformation growth factor (TGF) [5]. So, monocyte/macrophage system plays a key role in the early identification of MTB and the incidence of pulmonary TB [5]. Pattern recognition receptors (PRRs) are located on the surface of the macrophages and dendritic cells, which belong to the body's natural immune system and are the core of the receptor molecules identifying the pathogen. Many classes of PRRs have been described, including Toll-like receptors (TLR), NOD-like receptors (NLR) and C-type lectin receptors (CLR) [6-8]. Recently, polymorphisms in the TLR [3, 9-18] and NLR [19, 20] genes have been shown to be associated with susceptibility to pulmonary TB. The mannose receptor (MR) belongs to CLR, and the predisposition of MRC1 gene variants to pulmonary TB have not been reported yet.

MR is a member of the CLR family, which plays an important role in innate immunity [21]. MR is predominantly present on alveolar macrophages and dendritic cells and recognizes glycan structures containing mannose, fucose and N-acetylglucoasmine, which are commonly found on the cell walls of pathogenic micro-organism such as mycobacteria, fungus, parasites, and yeast [6, 22, 23]. MR binds to mannose-capped lipoarabinomannans (ManLAM), a cell wall component of MTB [24, 25], loaded to the antigen-presenting cells (APC), and then presented to T cells which play a role in immune response [26]. MR can also help macrophages to phagocytize MTB [27, 28] and plays an important role in innate immunity [25, 26]. The MRC1 gene, encoding the human MR, is located on chromosome 10p12 and consist of 30 exons. Several reports have shown that the MRC1 gene is associated with the susceptibility to some diseases, such as asthma, sarcoidosis and leprosy [29-31]. We speculated that the MRC1 gene may be an excellent candidate for susceptibility to TB, and tested for associations between MRC1 polymorphisms and the pulmonary TB in our Chinese case-control analysis.

The early morning, fasting blood samples from the patients and controls were collected in 3.0 mL EDTA tubes and stored at -70 °C. For each gene polymorphisms, it was ensured that the final selected samples of TB patients were similar to controls in the ratio of gender, age, presence of TB history of relatives, BCG vaccination and Tuberculin skin test (>10 mm). This study was approved by the Ethics Committee of the Faculty of Medicine (Zhejiang University, China), and informed consents were obtained from all subjects before blood sampling.

SNPs in the MRC1 gene were analyzed by polymerase chain reaction (PCR) and direct sequencing. Genomic DNAs were extracted from the peripheral blood leukocytes with DNA extraction kit (QIAamp® DNA Blood Min Kit, Germany) according to the manufacturer's instruction.

The PCR primer included forward: TTGAGGCTGCAATGAGACAT and reverse: AGTGTAAGGTAGACTGCTCT. The PCR was performed by denaturing at 95 °C for 5 min, followed by 35 cycles at 95 °C for 50 s, 63 °C for 50 s, and 72 °C for 30 s, and a final extension at 72 °C for 10 min. The amplified products were purified with PCR cleaning kit (AxyPrep PCR cleaning kit, USA) and then identified by scanning with the ABI 3100 sequencer (Applied Biosystems, Carlsbad, CA, USA).

Distribution of the MRC1 SNP allele frequencies in the TB group (n=222) and the control group (n=232) in a Chinese population.

Distribution of the MRC1 SNP genotype frequencies in the TB group (n=222) and the control group (n=232) in a Chinese population.

Pairwise LD between the 6 SNPs of the MRC1 gene was calculated for the cases and controls in a Chinese population (Figure 1). We found strong LD (D′> 0.75, P < 0.0001) between some pairs of markers in the MRC1 gene including G1186A and C1221G, G1186A and C1323T, G1195A and T1212C, G1195A and G1221C, G1195A and C1303T, T1212C and C1221G, T1212C and C1303T, C1221G and C1303T. Therefore, based on logistic-regression analyses, we observed that the haplotype of each SNP pair was associated with pulmonary TB (Table 6). We found that the frequency of the haplotype AGTCCT in the pulmonary TB group was higher than the control group, whereas, the frequency of the haplotype GGTCCT, GGCCCT, GGTCCC in the pulmonary TB group was lower than the control group. All haplotypes with the MRC1 gene polymorphisms showed no significant association with pulmonary TB (Table 6).

Linkage disequilibrium analysis of single-nucleotide polymorphisms (SNPs) in the MRC1 gene in a Chinese population. The number at the intersection of each pair of SNPs represents the pairwise D, D′, r2 and P values between two SNPs. Values of D′ > 0.75 were considered to be strong pairwise linkage disequilibrium. 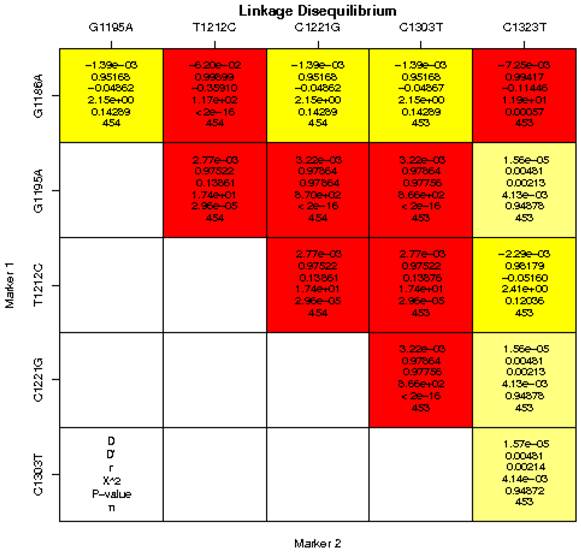 Association of MRC1 polymorphisms with TB in a Chinese population with logistic regression.

Recent studies have reported that MR plays an important role in innate and adaptive immunity [7]. These receptors activate immune response by extracellular carbohydrate recognition that binds the glycan structures of microbial pathogens, and may play an important role in TB infection [23]. However, polymorphisms in the MRC1 gene, encoding MR, have not been reported to be associated with pulmonary TB. We postulated that MRC1 polymorphisms may be associated with the development of pulmonary TB. Six SNPs in exon 7 of the MRC1 gene were analyzed. The results showed that both the frequency of genotype (P = 0.037; OR = 0.76; 95% CI, 0.58-0.98) and allele (P < 0.01; OR = 0.57; 95% CI, 0.37-0.87) for the G1186A (rs34039386) site were significantly different between the pulmonary TB group and the control group. The OR values of genotype and allele for G1186A were less than 1, indicating that MRC1 polymorphisms have effects on the development of pulmonary TB, and may reduce the risk of being infected with pulmonary TB.

The G1186A site of MRC1 is non-synonymous mutation that changes Gly to Ser. The mutation of this site may change the function of MR, which may also affect the binding of MR protein to polysaccharide structure on the MTB surface, thus, contributing to the secretion of anti-inflammatory factors. Meanwhile, we also analyzed association between the established haplotype of MRC1 gene and the incidence of pulmonary TB. The results showed that haplotype AGTCCT, GGTCCT, GGCCCT and GGTCCC in the MRC1 gene had no significant association with pulmonary TB (P > 0.05). In addition, the other 5 polymorphism sites of MRC1 gene [G1195A (rs71497223, Gly396Ser), T1212C (rs71497224, Ile404Ile), C1221G (rs34284571, Leu407Phe), C1303T (Leu435Phe) and C1323T (Asn441Asn)] also showed no significant association with pulmonary TB (P > 0.05), suggesting that these polymorphism sites were not associated with susceptibility to pulmonary TB.

27. Schlesinger LS. Macrophage phagocytosis of virulent but not attenuated strains of Mycobacterium tuberculosis is mediated by mannose receptors in addition to complement receptors. J Immunol. 1993;150:2920-30