Background: To evaluate the promoter methylation status of RECK gene and mRNA expression in patients with hepatocellular carcinoma (HCC).

Methods: We analyzed RECK methylation by MSP, and RECK mRNA by real-time PCR in 74 HCC. The liver cell lines (7721, Chang and Hep-G2) were treated with 5-Aza-CdR and TSA.

Conclusion: The results suggested that the hypermethylation may lead to promoter silencing of RECK mRNA and associated with poor survival in HCC.

The reversion-inducing cysteine-rich protein with Kazal motifs (RECK) is anchored to the cell surface via glycosylphosphatidylinositol, which can suppress tumour invasion and metastasis through involving in breakdown of the extracellular matrix [1]. RECK modulates the function of MT1-MMP in directly inhibiting its proteolytic activity and modulating the endocytic pathway. Hence, RECK could play a key role of tumor suppression by involving the regulation of angiogenesis and maintenance of vascular integrity [2].

RECK appears to down-regulation and have a good prognostic significance across several cancers. Reduced RECK expression was an independent and significant factor to predict a poor prognosis in Non-small-cell lung carcinoma, colorectal cancer, pancreatic cancer, and gastric cancer [3-6]. The level of RECK gene expression is inversely correlated with histological grade, infiltrative depth and lymphatic metastasis in esophageal squamous cell carcinoma (ESCC) [7]. The breast carcinoma patients whose tumors exhibited low levels of RECK had a poor 5-year RFS rate than those with high RECK expression [8]. RECK displays as a metastasis suppressor in cholangiocarcinoma, and upregulation of RECK expression could provide a potential therapy to improve the prognosis [9].

There are almost certainly pathways by which RECK is down-regulated in cancer. Hypoxia induces RECK downregulation through the recruitment of HDAC1 and HIF-1α to the rHRE2 site in the promoter and the inhibition of hypoxic RECK silencing would be a therapeutic and preventive target for early tumorigenesis. However, the CpG island promoter hypermethyla­tion is associated silencing of tumor suppressor genes, which is the most recognized epigenetic dis­ruption in human tumors [10]. RECK downregulation is caused by promoter methylation in metastatic non-small cell lung cancer and promoter methylation was also detected in human lung cancer cell lines [11]. Hypermethylation of RECK promoter is also a common event in human ESCC, which occurs concurrently in tumor-adjacent normal mucosa and is correlated with poor prognosis in ESCC patients [12]. It implied that the promoter methylation of RECK could play a particularly important regulatory role for RECK expression in carcinogenesis.

The molecular mechanisms behind RECK transcriptional regulation are clearly complex, and are still yet to be fully defined. So far the few studies conducted focused on RECK methylation and no data are available regarding RECK in HCC. The purpose of the study was to investigate the relationship between the expression of RECK and promoter methylation in HCC, and determined the effects of Trichostatin A (TSA) treatment on the methylation status and expression level of the RECK gene in liver cell lines.

This study was approved by our institutional review board. A total of 74 patients with HCC who underwent complete tumor resection at the Second Military Medical University between January 2008 and December 2009 and whose histological specimens were available for immunohistochemical staining (IHS) were retrospectively reviewed. The patients consisted of 65 men and 9 women, ranging in age from 27 to 70 years (mean ± SD, 49.51 ± 11.12 years). All tumors were histologically diagnosed as HCC according to the Edmondson-Steiner classification system [13]. In all cases, H&E-stained slides were re-examined independently by three experienced pathologists without any knowledge of clinical data. The matched Non-Hcc tissues were obtained from the liver >3 cm away from tumors and were confirmed to be free of tumor by microscopic examination. The frozen tissue samples were flash frozen in liquid nitrogen immediately after surgical resection until analysis.

The liver cell lines (7721, Chang and Hep-G2) were kept in our laboratory. The cells were cultured in RPMI medium plus 10% fetal bovine serum in a humidified 37°C incubator containing 5% CO2. They were plated and treated with final concentration of 10 µM 5-Aza-2'-deoxycytidine (5-Aza-CdR, Sigma) and 400 ng/ml TSA. The fresh medium was changed every 24 hours to maintain the 5-Aza-CdR and TSA concentration. RNA was isolated 3 days after treatment.

Total RNA was isolated from 74 HCC, adjacent normal tissues, and cultured cells. In brief, total RNA was extracted with TRIzol reagent, according to the protocol provided by the manufacturer. The quantity and quality of the RNA samples were measured carefully by spectrophotometer and electrophoresis. The first-strand cDNA was synthesised from 2 μg of total RNA. Primer sequences of RECK for reverse transcription-PCR (RT-PCR) reaction were forward (5'- CCTCAGTGAGCACAGTTCAGA-3') and reverse (5'- GCAGCACACACACTGCTGTA-3') [15]. Quantitative real-time PCR (qPCR) were carried out by using the Mx3000P QPCR System (Stratagene, USA). The cDNA was then used for qPCR in a 20 μl SYBR Premix Ex Taq. qPCR for RECK mRNA expression was performed under the following conditions: 5 min at 95°C, 40 cycles of 30 seconds at 95°C, 30 seconds at 60°C, and 1min at 72°C. As an internal control for qPCR, β-actin mRNA expression was amplified from the same cDNA samples. All results were normalized to β-actin amplification. CT values for triplicate reactions were averaged and relative RECK expression was determined with the comparative CT method, using average CT values for RECK and β-actin.

All data were generated without knowledge of the clinical status of the samples analyzed by SPSS 17.0 software (SPSS, Inc., Chicago, USA). Associations between categorical variables were examined by using the Pearson χ2 and Fisher exact tests. Kaplan-Meier analysis and the log rank test were performed to identify survival differences in HCC. A p value of less than 0.05 was considered statistically significant.

The expression of RECK mRNA in HCC tissues. (A)The RECK mRNA was indicated in HCC and Non-Hcc samples. Data are shown by the Mean -∆CT and 95%CI. The RECK mRNA in HCC was lower than that in the matched Non-Hcc tissues (p = 0.005). (B,C) There was a decreased tendency for RECK expression from Non-Hcc tissues to HCC. Expression of RECK was elevated (-∆∆Ct>=0) in only 24 of the 74 HCC patients but decreased (-∆∆Ct<0) in 50 of the patients. Statistical analyses were done using the paired t test.

The relationship between RECK mRNA status and known clinicopathologic factors in 74 tumor tissues were examined. Initially analyzed were the associations between mRNA status and available clinical information including age, gender, differentiation of the tumor, presence of hepatitis, presence of cirrhosis, tobacco, alcohol, AFP. These analyses were summarized in Table 1.

Correlation of clinicophthologic variables with RECK mRNA in HCC.

There was no other significant correlation found between clinicopathological factors and RECK mRNA in Chinese HCC. The survival of these patients was compared by the Kaplan-Meier method and the log rank test (Fig. 2). We found the decreased Expression of RECK (-∆∆Ct<0) were significantly correlated with poor overall survival (p = 0.0003; HR=0.336, 95% CI: 0.19-0.60). These results suggested that RECK mRNA level could be prognostic factors in HCC. 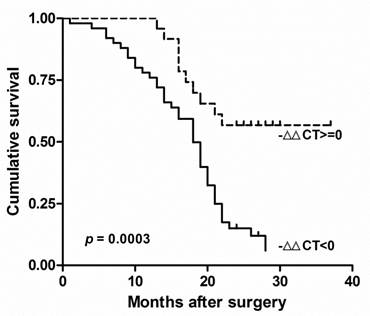 Methylation status of RECK promoter in HCC and its adjacent tissue 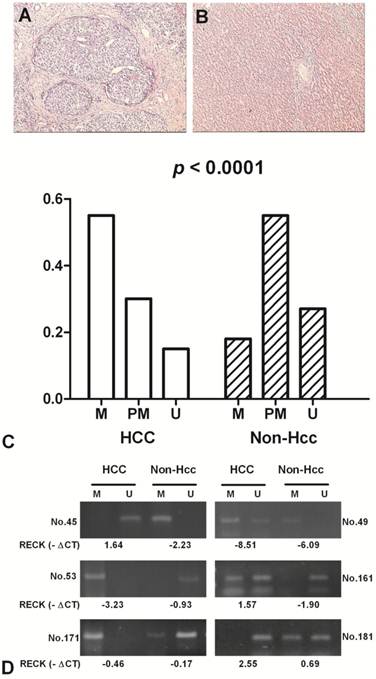 RECK mRNA by 5-Aza-CdR and TSA

To analyze the effects of epigenetic inhibitor on RECK gene expression, Real-time PCR analyses were performed using liver cell lines (7721, Chang and Hep-G2) treated with final concentration of 10 µM 5-Aza-CdR and 400 ng/ml TSA. After normalizing mRNA levels to β-actin, a 1.6-2.4 ∆Ct induction of RECK mRNA was detected after 5-Aza-CdR treatment in Chang and 7721 cells, but decrease for Hep-G2 cells (Fig. 5A). Additionally, qRT-PCR assays found that the expression of RECK gene was induced 3.2-6.9 ∆Ct after TSA treatment in Hep-G2 and Chang cells, and undetectable in 7721 cells. For the 5-Aza-CdR + TSA treatment, we found that a 1.4-4.4 ∆Ct induction of RECK mRNA was detected in three cells. Taken together, the above results suggested that the expression of RECK can be activated by 5-Aza-CdR or TSA, and the effect on RECK expression is very various for different cells.

The RECK gene is widely expressed in normal human tissues but is downregulated in tumor cell lines. RECK encodes a membrane-anchored glycoprotein that suppresses tumor invasion and angiogenesis by regulating matrix-metalloproteinases [18]. Understanding of the transcriptional regulation of RECK constitutes a potent approach to the molecular basis of liver malignant. DNA methylation of the RECK promoter and histone acetylation/deacetylation have been studied to understand the underlying mechanisms of RECK expression [19].

RECK gene is a common negative target for oncogenic signals and that its downregulation is a step in the pathway towards malignant conversion. Our study confirmed that RECK was lower expression in HCC tissues than corresponding Non-Hcc tissues by Real-time PCR. Meanwhile, 24 of HCC patients were elevated for RECK mRNA, and 50 cases were decreased for RECK mRNA. RECK mRNA was a statistically significant difference between HCC and Non-Hcc tissues. However, the loss of RECK mRNA could play an important role in the pathogenesis of HCC. Recent studies implied RECK expression is closely related to tumor invasion and metastasis, but there is no difference significantly between the level of RECK and clinical factors in our HCC patients. Our findings implied that HCC patients with high RECK mRNA expression tended to show better survival, which support that the feasibility of RECK mRNA as a promising prognostic molecular marker for HCC. These results support the view that RECK is an important tumor suppressor gene. 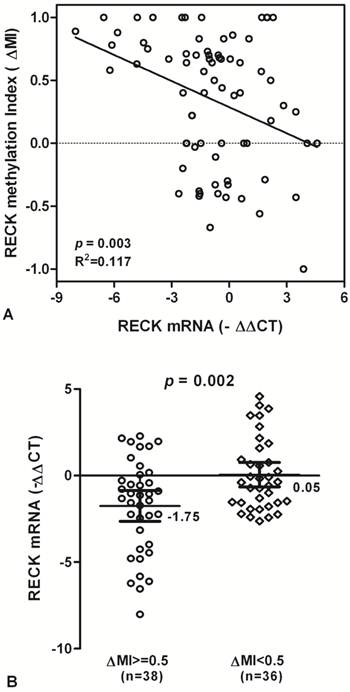 Effect of 5-aza-CdR and TSA on expression of RECK mRNA in liver cell lines. (A) The RECK mRNA was detected by real-time PCR for 7721, Chang, and Hep-G2 treated with 5-aza-CdR, TSA, alone or combination. (B) It indicated that RECK demethylation induced significantly by TSA or TSA in 7721, Chang and Hep-G2 cells. 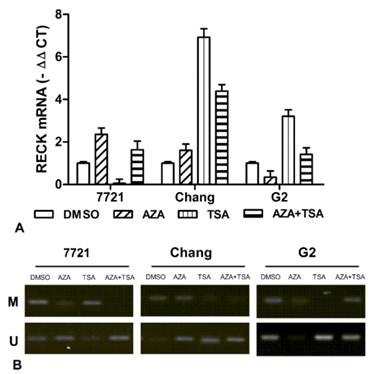 DNMT inhibitor could reverse promoter methylation and restores related gene expression in human cancer cell Lines [20]. DNMT inhibitor may restore RECK expression to inhibit cell invasion in colon cancer and lung cancer cell lines [11, 15]. EGCG, a major component of green tea, also may enhance RECK expression by reversal of hypermethylation of RECK promoter and inhibit MMP activities as well as cancer cell invasion in OSCC cell lines [21]. DNMT inhibitors may be useful for the treatment of RAS-induced metastasis by restored RECK expression [22]. And HDAC inhibitors, TSA, up-regulated RECK via transcriptional activation in CL-1 human lung cancer cells or restored the expression of RECK under hypoxic conditions [23, 24]. Our results showed that liver cells treated with 5-Aza-CdR or TSA gave a different change in RECK mRNA. The 5-Aza-CdR alone treatment was more effective in 7721 and Chang than Hep-G2. The TSA alone treatment was more effective in Chang and Hep-G2 than 7721. And the combination treatment has a change on three cells. Meanwhile, we observed the different effects of epigenetic inhibitors on promoter demethylation of RECK gene in three cells.

Taken together, RECK promoter hypermethylation is frequently observed in HCC and is associated with loss of mRNA expression, and decreased RECK mRNA is significantly correlated with worse survival in HCC. Additional work is needed to determine the mechanism of promoter methylation and RECK mRNA in liver tumourigenesis.