As a new type of pluripotent stem cells, reprogrammed by ectopic expression of defined factors Oct4, Sox2, Klf4 and c-Myc from differentiated somatic cells (1), iPS cells have unlimited self-renewal capacity, maintain pluripotency, and are very similar to embryonic stem (ES) cells in morphology, proliferation, pluripotent gene expression, promoter methylation, teratoma formation and the capacity to differentiate into all of the cell types in vivo or in vitro under appropriate induction conditions (1-5). Similar to ES cells, mouse iPS cells possess the ability to form germline chimera upon injection into early blastocysts (6) and can produce viable offspring using a tetraploid complementation strategy (7, 8). Considering the abundant resources, identical self-renewal and unlimited proliferation abilities, iPS cells are regarded as a potential source that can be easily genetically manipulated to produce transgenic, chimeric and knock-out domestic animals. iPS cells may provide an invaluable tool not only for research aimed at drug development and regenerative medicine in human beings but also for transgenic breeding and genetically modified domestic animals. Additionally, mouse ES cells can efficiently produce both presumptive oocytes and sperm cells under defined culture conditions (9-11).

Cattle are the most common type of large domesticated ungulates and are raised as livestock for meat, as dairy animals for milk and other products. Bovine iPS cells are artificially derived from adult somatic cell without the use of rare and excellent embryos, so bovine iPS cells and their derivatives especially germ cells will enable the precise genetic engineering of livestock for improved production traits, are also powerful reproductive tools and could significantly speed up the breeding process. In the current study, we report the characterization of bovine iPS cells by lentiviral transduction of Oct4, Sox2, Klf4 and c-Myc reprogramming factor fusion proteins with enhanced green fluorescent protein (EGFP) and demonstrate the differentiation capacity of bovine iPS cells, including oocytes, in vitro under defined induction conditions.

Teratoma formation and in vitro differentiation

After digesting from culture dishes with trypsin solution, cells were pelleted, resuspended at 1×107 cells/ml in serum-free DMEM, and 200 μl was injected subcutaneously into the dorsal flank of 6-week-old severe combined immunodeficient BALB/C nude mice. At 9 weeks after injection, tumor tissues were generated and fixed in 4% paraformaldehyde and stained with hematoxylin/eosin.

In vitro differentiation of cells was performed via spontaneous differentiation of embryoid body (EB) formation. The cells were detached from culture dishes using 1 mg/ml dispase, collected after centrifugation, resuspended in culture medium without LIF and bFGF, and seeded in low-adhesive dishes (Qingdao Alpha). After 7 days in suspension culture, EBs were transferred to gelatin-coated dishes and cultured for another 7 days.

For the derivation of female gametes, cells were cultured and passaged without feeders after digestion with trypsin solution. After 4 days, cells were resuspended in culture medium without LIF and bFGF and formed EBs by hanging drop culture. The resulting EBs were transferred to low-adhesive dishes. After 4 days in suspension culture, EBs were transferred to gelatin-coated dishes and cultured in DMEM/F12 medium containing 10% FBS, 10% porcine follicular fluid and 0.5 μM retinoic acid (RA) for another 4 days.

For karyotyping, cells were treated for 2.5 hours with 0.1 μg/ml colchicines (Sigma), digested with trypsin solution, resuspended in 0.075 mol/L KCl and incubated at 37°C for 25 min before fixation with methanol and acetic acid (3:1) for 10 min. After centrifugation, cells were resuspended, spread on slides, stained with giemsa dye, air-dried, mounted and examined.

Purified RNA samples were isolated from the different cells and treated with an RNase-free DNase kit to effectively remove contaminating genomic DNA. After genomic DNA elimination, the RNA samples were ready for reverse transcription to synthesize first-strand DNA according to the manufacturer's instructions (Qiagen). The primers used are described in Table 1. PCR products were examined by 1% agarose gel electrophoresis.

Real-time PCR was performed in an ABI Step-One Plus real-time PCR system using a Power SYBR Green PCR Master mix (ABI 4367659) using the standard curve method with β-actin as the internal control. The primers used to amplify EndoOct4, Nanog andβ-actin (13) are described in Table 2. Amplification was performed in 20 μl reaction volume according to the manufacturer's instructions.

The primers used for RT-PCR

Genomic DNA was prepared from cell colonies using a DNA isolation kit (Takara) according to the manufacturer's instructions. The isolated DNA was treated with sodium bisulfite using a MethylampTM DNA modification kit (Epigentek) according to the manufacturer's instructions. The primers used to amplify Oct4 and Nanog are described in Table 2. Amplified fragments were cloned into the T-vector and at least 10 randomly selected positive clones were chosen and sequenced for each sample.

Cells were washed with PBS and digested from culture dishes with trypsin solution and then incubated with a 1:200 dilution of mouse-anti SSEA1 antibody (Chemicon, MAB4301) for 60 minutes on ice. Cells were washed with PBS prior to staining with fluorescein isothiocyanate (FITC)-conjugated donkey anti-mouse IgM secondary antibody (Jackson) for 60 min in a 1:200 dilution on ice and washed again with PBS prior to flow cytometry analysis. Cells were analyzed using BD FACS Calibur flow cytometer and cell quest software. Next, cells were probed with an appropriate isotype antibody as a negative control. All treatments were performed in duplicate.

Cells were washed with PBS, collected in sample buffer, and then heated to 100℃ for 10 min. After centrifuging at 12 000 rpm for 4 min, whole-cell lysates were separated using SDS-PAGE and then transferred to polyvinylidene difluoride (PVDF) membranes. The membranes were blocked for 1 h at room temperature in TBST buffer (10 mM Tris, 100 mM NaCl, 0.2% Tween-20, pH 7.4) containing 5% low-fat milk, incubated in fresh buffer containing primary antibodies anti-Oct4 in rabbit (Abcam, ab19875) and anti-β-actin in rabbit and then diluted 1: 1000 for 1 h at room temperature. After five 5-min washes in TBST, the membranes were incubated with AP-conjugated anti- rabbit (1:1000) for 1 hour at room temperature. Immunoreactive proteins were displayed with AP staining solution.

After infection with lentiviruses 2-4 times, a small portion of bovine fibroblasts gradually displayed sphere morphology, proliferated and formed cell colonies that consist of two cell types: one with EGFP in the nucleus and the other without EGFP expression 2 days after the 4th lentivirus infection. The spherical cells were able to form colonies with clear boundaries, displayed morphological uniformity, grew rapidly after digestion with dispase, and passaged at a 1:4 ratio every 2-3 days (Fig.1A, B, C, D). In these experiments, under the culture conditions of medium containing 1000 U/ml LIF, 4 ng/ml bFGF and feeders, the bovine iPS cells morphologically resembled human ES cells rather than mouse ES cells. After the 4th lentivirus infection, 45-150 AP+ cell colonies from 2.15×105 bovine fetal fibroblasts were obtained, and the induction efficiency was approximately 0.0002-0.0007%. However, after only 1 round of lentivirus infection, 5-10 AP+ cell colonies from 2.15×105 bovine fetal fibroblasts were obtained. Repeated lentivirus infections could clearly improve the induction efficiency and shorten the induction period. As the number of passages increased, the proportion of cells expressing EGFP in the nucleus decreased and the fluorescence intensity in the nucleus of cells attenuated gradually. After passaging more than 20 generations, the fluorescence in cell colonies was no longer visible. Through continuous culture and passage, 4 bovine iPS cell lines were established and have been stably passaged for over 40 passages.

AP is highly expressed in ES cells, but expression is low or even absent in differentiated cells. Therefore, AP expression is a key criterion for ES cells. Bovine iPS cells produced in the current study displayed strong AP expression. After staining with AP solution, colonies displayed a reddish-brown or reddish-purple color. The intensity of color varied among colonies; for example, some colonies were strongly positive along the boundary but weak in the center, while others were strong in the center but weak along the boundary. In contrast, mouse feeder cells were negative (Fig.1E). When cultured with feeders and stem cell medium, iPS cells generated in this study exhibited normal karyotype (2n = 60) (Fig.1F).

RT-PCR analysis indicated that the bovine iPS cells that were generated in the current study expressed not only endoOct4, endoKlf4 and Nanog but also exoOct4 and exoKlf4. In contrast, the bovine fibroblasts did not express these genes (Fig.2A). The expression of the endogenous pluripotent genes Oct4 and Nanog in bovine iPS cells were highly evaluated by quantitative real-time PCR (Fig.2B). In addition, bovine iPS cells expressed not only endoOct4 but also exoOct4 protein by western blotting (Fig.2C). Examination of stem cell antigens indicated the presence of Oct4, Nanog and SSEA1 antigens in bovine iPS cells (Fig.3). Under the same condition, feeders or bovine fibroblasts were negative for these antigens. The cells with strong EGFP expression were also strongly positive for Oct4 antigen expression, while those with weak or negative EGFP were moderate in Oct4 antigen expression. However, SSEA1 and Nanog antigen expression were not different in colonies with or without EGFP expression. In addition, the stem cell markers SSEA3, SSEA4, TRA-1-60 and TRA-1-81 were negative in bovine iPS cells. 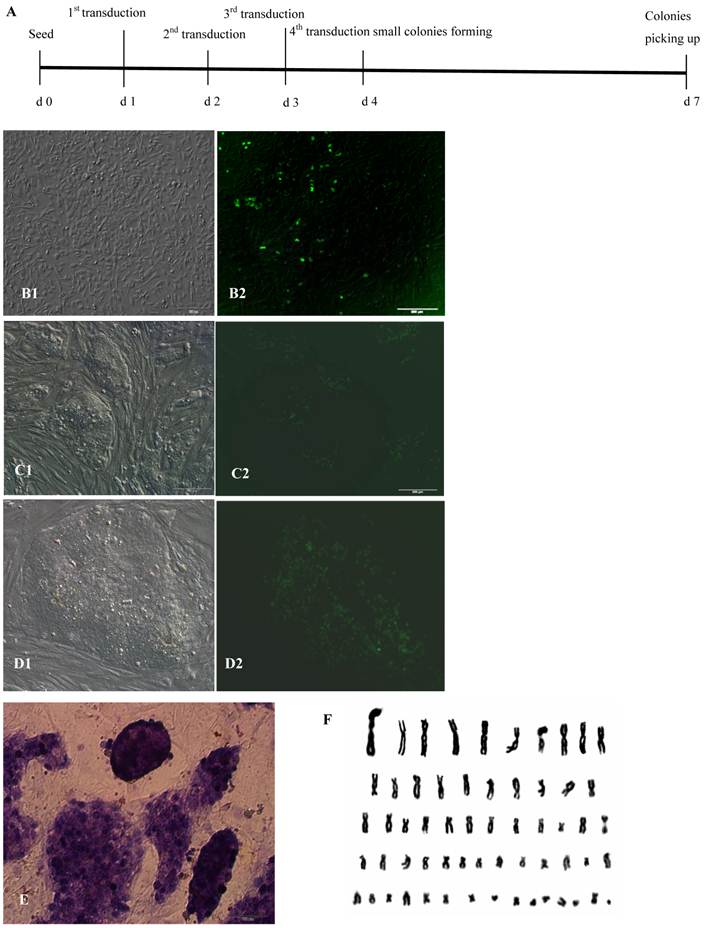 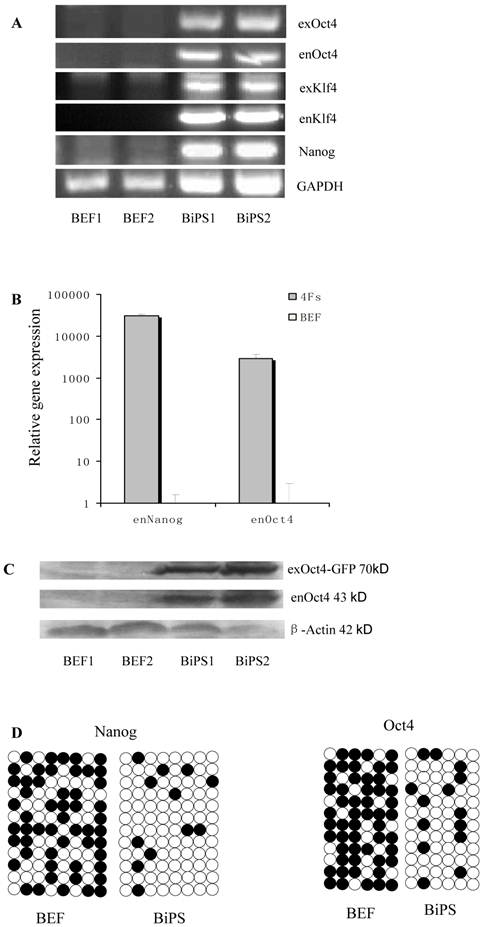 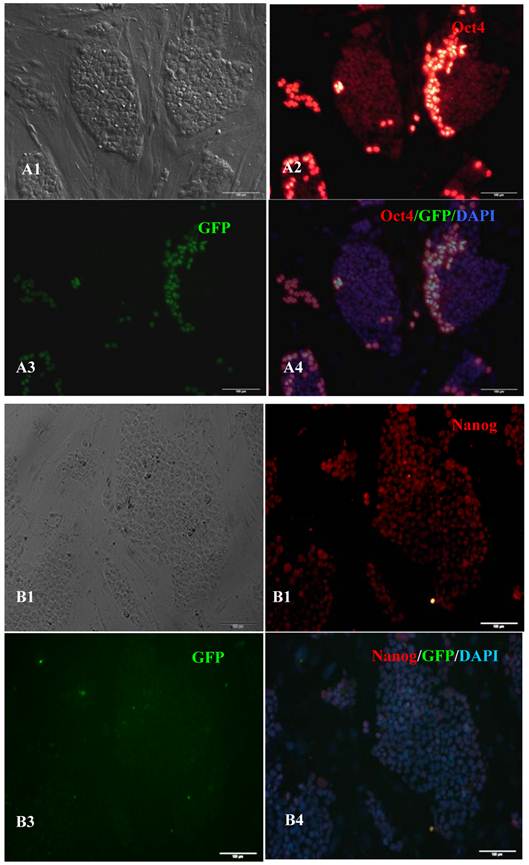 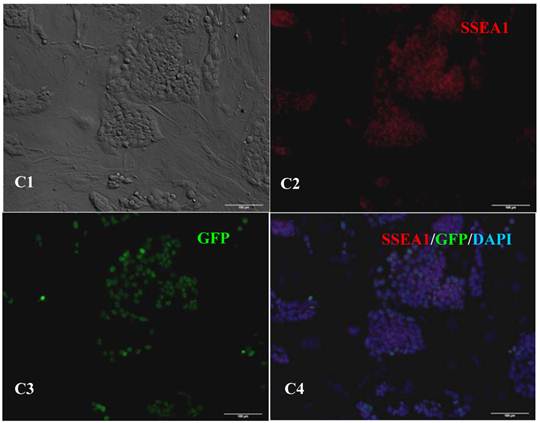 Bisulfite genomic sequencing analyses showed that the cytosine guanine dinucleotides (CpG) in the promoter regions of Oct4 and Nanog were highly unmethylated in bovine iPS cells compared to the fetal fibroblasts (Fig.2D). These results reveal that the promoters were reactivated in bovine iPS cells and the fetal fibroblasts were reprogrammed by lentiviral transduction of Oct4, Sox2, Klf4 and c-Myc reprogramming factor fusion proteins with EGFP. 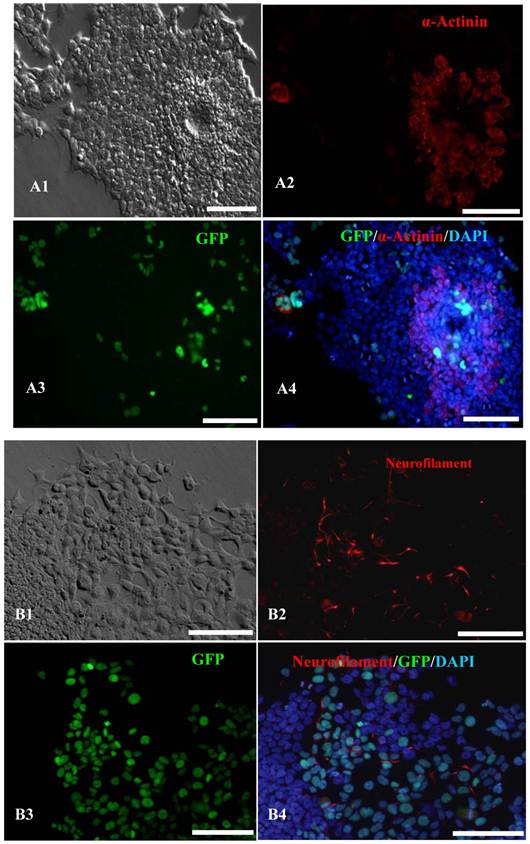 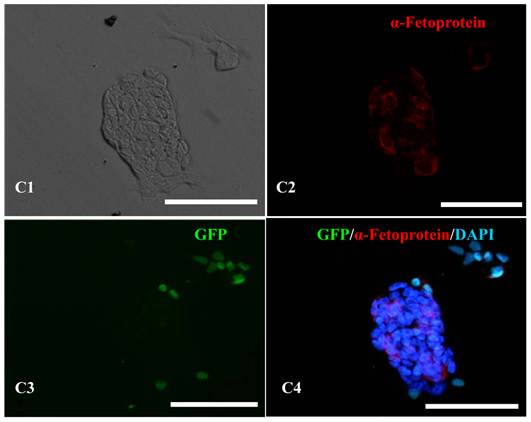 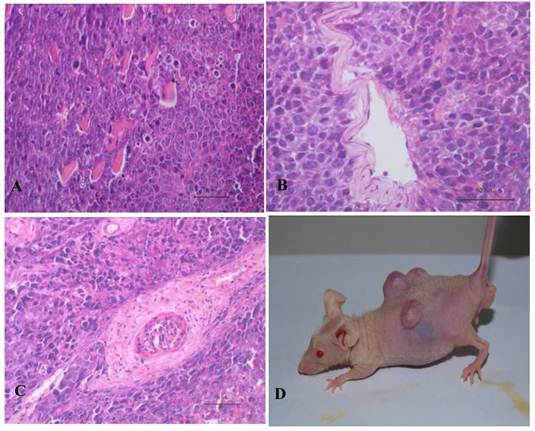 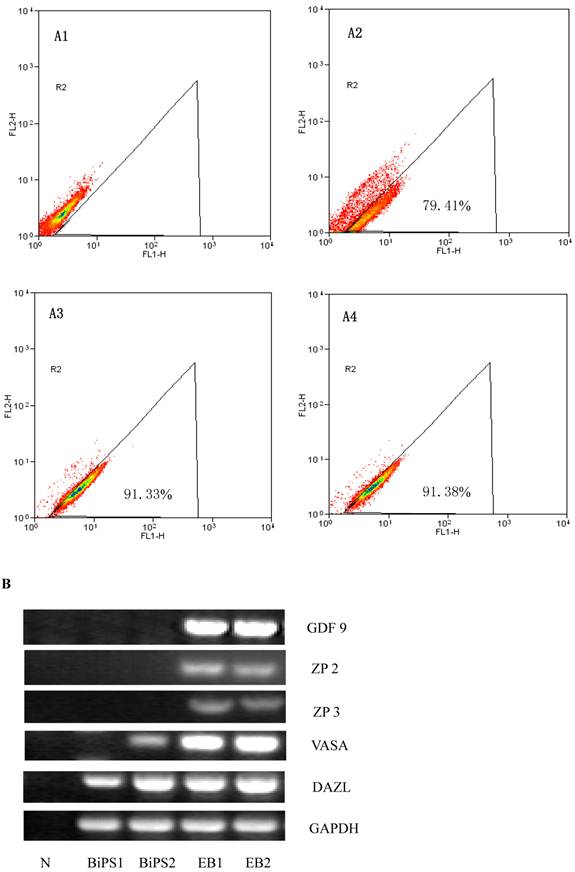 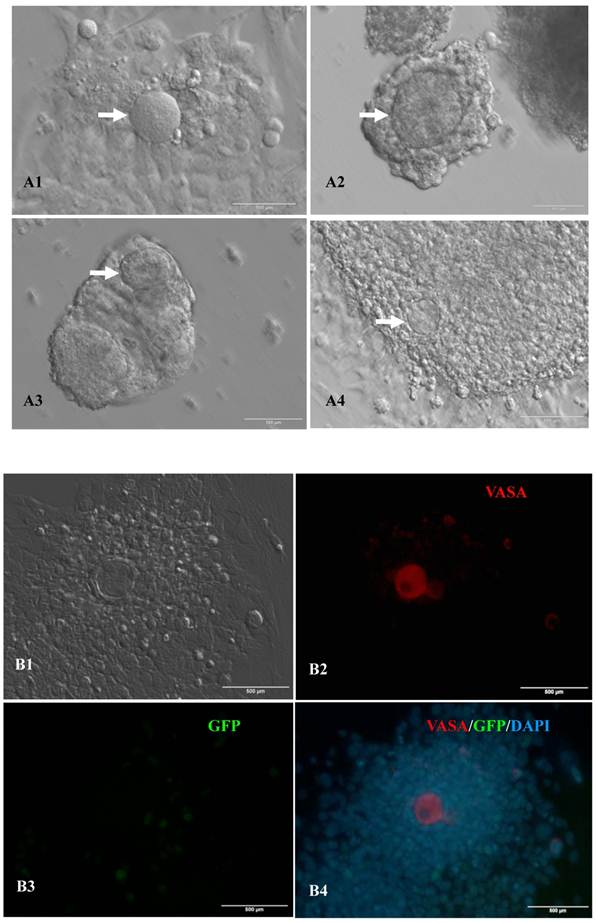 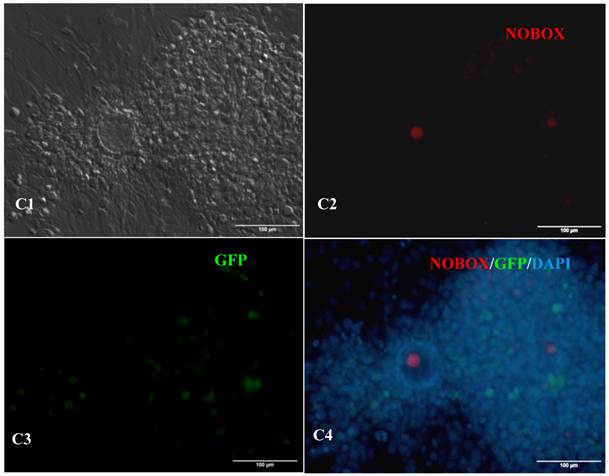 The four defined factors Oct4, Sox2, Klf4 and c-Myc have been successfully used in the induction of pluripotent stem cells from somatic cells. Previous studies have shown that the four defined factors from human or mouse are able to transform somatic cells of other species into pluripotent stem cells (14-16), demonstrating the commonality of these highly conserved factors. In our previous study, human Oct4 and the other three porcine factors were successfully used to generate porcine pluripotent stem cells (12). In the current study, the combination of these factors was also effective in the derivation of bovine iPS cells. The fusion proteins between EGFP and exogenous functional genes have been applied widely in the study of gene functions and protein properties. In the current study, EGFP fusion proteins were effective in the induction of bovine iPS cells when introduced by lentivirus, demonstrating that the EGFP portion does not interfere with the functioning of exogenous defined factors in the fusion proteins during somatic cell reprogramming.

In the current study, as the number of passages increased, the proportion of cells expressing EGFP decreased and the fluorescence intensity attenuated gradually. Additionally, after more than 20 passages, the fluorescence in cell colonies was no longer visible. During somatic cell reprogramming, partially reprogrammed cells still express high levels of exogenous factors, and the incomplete silencing of exogenous factors was also observed in iPS cells of other species, such as human (17), rat (5) and pig (16). Chin et al (18) discovered that upon comparing gene expression profiles among different passages, human iPS cells at 54-61 passages more closely resemble ES cells than those at 5-9 passages. Therefore, iPS cells may gradually establish reprogramming ability during continuous culture. In addition, through fusion proteins, the cells expressed exogenous defined factors in the colonies also exhibited pluripotency and were able to differentiate into all three germ layers in vitro. The results indicate that somatic cell reprogramming is complex and tracking the exogenous defined factors through fusion proteins is very effective.