Department of Internal Medicine and the Institute of Hypertension, Tongji Hospital, Tongji Medical College of Huazhong University of Science and Technology, Wuhan, People's Republic of China.
* contributed equally to this study.

Circulating miRNAs have been shown as promising biomarkers for various pathologic conditions. The aim of this study was to clarify that circulating miR-1 and miR-126 in human plasma might be useful as biomarkers in acute myocardial infarction (AMI). In our study, after pre-test, two candidate miRNAs were detected by using real-time RT-PCR. Cardiac troponin I (cTnI) concentrations were measured by ELISA assay in plasma from patients with AMI (n=17) and healthy subjects (n=25), simultaneously. Increased miR-1 and decreased miR-126 in plasma from patients with AMI after the onset of symptoms compared with healthy subjects were found. A remarkable finding in this study is that miR-1, miR-126 and cTnI expression levels exhibited the same trend. Our results suggest that the plasma concentrations of miR-1 and miR-126 may be useful indicators for AMI.

MicroRNAs (miRNAs) are a relatively novel class of endogenous, non-protein coding small RNA molecules that can regulate hundreds of genes through binding to the 3' UTR of target mRNAs [1-3]. MiRNAs have been proven to play important roles in self-renewal, cellular development, differentiation, proliferation and apoptosis [4, 5]. Mature miRNAs bind to specific regions of mRNA targets by a mechanism that is not completely understood, resulting in translational repression or mRNA degradation [6-9].

The human genome encodes more than 1,000 miRNAs with tissue or cell type specific expressions [10-13]. Studies have shown that miRNAs have been observed in a wide range of human diseases, including autoimmune, inflammatory, neurodegenerative and cardiovascular diseases [14, 15]. There are mounting evidences showing that cardiac-specific miRNAs, miR-1, miR-133a/b and miR-208, are involved in heart development and cardiovascular diseases, including acute myocardial infarction (AMI) in experimental animals [16]. Recent studies have shown that some miRNAs are present in the systemic circulation, both in humans and animals, and are associated with exosomes and microparticles [17-20]. The levels of some circulating miRNAs have been reported to be differentially expressed during pregnancy and in the presence of a variety of cancers or cardiovascular diseases.

High mortality and morbidity is common in AMI. Some biomarkers have been applied in diagnosis of AMI; for example, cardiac troponin I (cTnI), MB and so on. New approaches that can improve current diagnosis for AMI are still lacking.

However, the expression and possible roles of miRNAs in AMI are less well studied. Cardiac injury, which occurs after AMI increases the circulating levels of several myocardial-derived miRs (eg, miR-1, miR-133, miR-499, miR-208), whereas patients with coronary artery disease or diabetes showed reduced levels of endothelial-enriched miRs, such as miR-126 [21]. In the present study, we assessed the hypothesis that miR-1 and miR-126 might be useful for identifying and evaluating AMI. Our aim was to look for miRNA-based modulation of gene expression in AMI.

This study was supported by the Ethics Committee of Tongji Hospital, and was performed in accordance with the principles of the Declaration of Helsinki. After gaining their written informed consents, we gathered blood samples from 17 patients and 25 healthy adults at Tongji Hospital between October 2009 and May 2010. AMI was diagnosed based on combination of several criteria: 1) ischemic symptoms; 2) creatine kinase-MB (CK-MB); 3) pathological Q wave; 4) increased cTnI; and 5) ST-segment elevation or depression [22]. In addition, 25 healthy adult volunteers (normal electrocardiogram and no history of cardiovascular diseases) were enrolled in this study. The blood samples of patients with AMI were acquired at 4h (± 30min), 8h (± 30min), 12h (± 30min), 24h (± 30min), 48h (± 30min), 72h (± 30min) and 1w (± 60min) after the onset of symptoms. Plasma was isolated by centrifugation and conserved at -80°C until purification.

Total RNA was extracted from plasma with TRIzol LS Reagent as described previously [23].

Plasma cTnI concentrations were measured by ELISA assay according to the manufacturer's protocol (Abnova, Taiwan).

Two μg of total RNA were reverse-transcribed using Transcript First-strand cDNA Synthesis SuperMix (TransGen Biotech, Beijing, China) in accordance to the manufacturer's protocol. In short, the 50 uL reactions were incubated for 60 min at 42°C, 10 min at 70°C, and then stored at 4°C.

qRT-PCR were analyzed using the Bulge-Loop™ miRNA qRT-PCR Detection Kit (Ribobio Co., Guangzhou, China) and TransStartTM Green qPCR SuperMix (TransGen Biotech, Beijing, China) in accordance with the manufacturer's protocol with the Rotor-Gene 6000 system (Corbett Life Science, QIAGEN, Hilden, Germany). Briefly, the reactions were incubated at 95°C for 30s, followed by 40 cycles of 95°C for 30s, 60°C for 20s, 70°C for 1s. The relative expression level for each miRNA was computed using the comparative CT method. It is important to note that to control for possible diversity in the amount of starting RNA, miRNA expression was normalized to small nucleolar RNA U6.

A widely used method to present relative expression of miRNA is the 2-ΔΔct method. Relative expression of miRNA presents the data of the miRNA of interest (CtmiRNA of interest) relative to internal control gene (Ctinternal control miRNA), termed Δct. Results are calculated as Δct± standard deviation (SD). Different groups of AMI patients and healthy adults were compared with Δct±SD of the control group (healthy adults) and tested for statistical significance. When the differences in Δct±SD of the tested groups reached or were below p = 0.05, the difference in miRNA expression was considered statistically significant. The data were presented as fold change graphically. Fold change of the tested group is calculated relative to the control group (healthy adults) using the 2-ΔΔct equation.

All values of miRNAs are expressed as mean±SD. Comparisons of parameters among ≥ 3 groups were analyzed by repeated-measures ANOVA. Independent-sample T test was used for 2-group comparisons. For categorical variables, Chi-Square test was used. Time-course trends of miRNAs and cTnI were analyzed by repeated-measures ANOVA. Differences were considered statistically significant at a value of P<0.05.

Among 17 patients with AMI, 13 were males and 4 females; their age ranged between 40 and 70 years (mean 53±12.5). All patients had a transmural MI. There were no statistical differences between the control group and the AMI patients for any of the considered variables such as LDL cholesterol, total cholesterol, total triglycerides, HDL cholesterol, white blood cell count, systolic blood pressure, diastolic blood pressure, creatinine and history of diabetes and smoking status were recorded respectively. Details were shown in Table 1.

MiR-126 and miR-1 in human AMI groups and healthy adults. 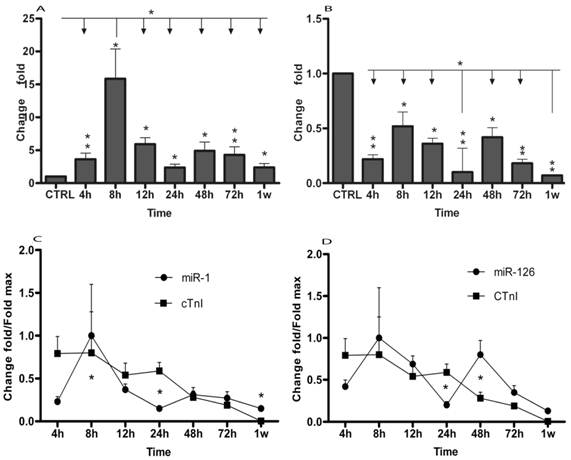 Specificity and sensitivity of miR-1 and miR-126 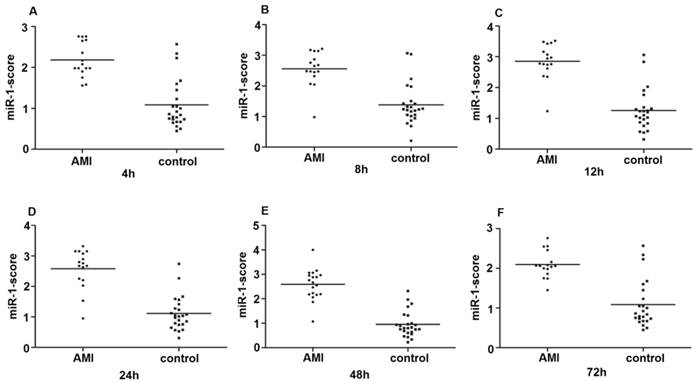 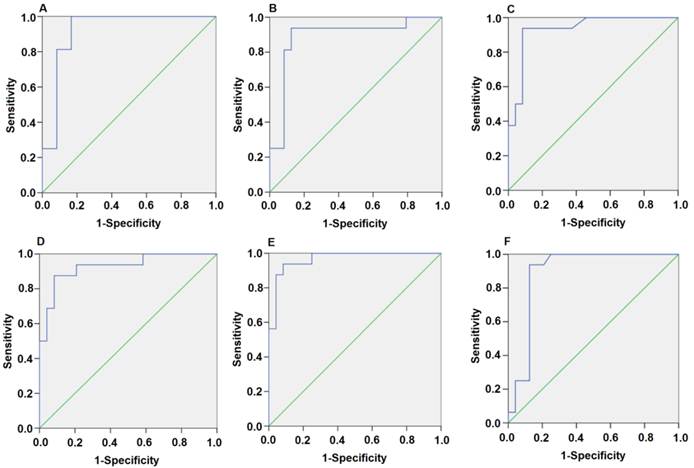 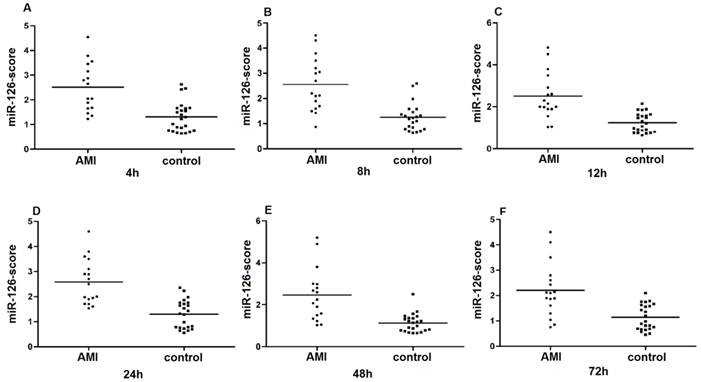 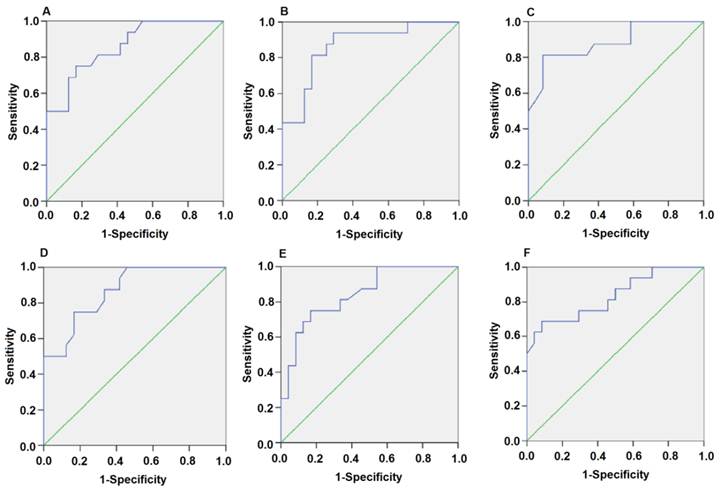 MiRNA regulates gene expression by binding and modulating the translation of specific miRNAs [25-28]. In recent years, tremendous efforts have been made to use a miRNA microarray screening approach to address the miRNA expression profiling in infarted hearts from animal models [28-30]. Recent evidences suggested that miRNAs are excellent promising disease biomarkers [31-33]. MiRNAs have been consistently detected in serum, plasma and other bodily fluids and specific miRNA patterns have been associated with pregnancy and with certain diseases [34-36]. MiRNAs have been shown to play important roles in development, stress responses, angiogenesis and oncogenesis. Accumulating evidence also points to important roles of miRNAs in the cardiovascular system [8, 37]. However, the role of miRNA in AMI is just emerging.

It should be noted that the present study of circulating miR-1 and miR-126 as potential biomarkers for AMI was conducted in a relatively small sample size and future evaluation in larger clinical studies will be needed to confirm the utility as a biomarker. Nonetheless, our study provides a solid basis to identify and develop miR-1 and miR-126 as a novel class of blood-based biomarkers for AMI in the future.

In summary, we found that circulating miR-1 and miR-126 of patients with AMI were significantly changed in a time dependent manner. This suggests that miR-1 and miR-126 have potential utility as novel potential biomarkers for clinic diagnosis of AMI.

This work was supported by grant from the National Natural Science Foundation of China (No. 30770882 and 81070236). We would like to thank Guangxue Li, Yan Lou and Dafeng Lin for their technical assistance. And we thank Dr. Katherine Cianflone at Laval University (Canada) for helping us editing the manuscript.