Pf62-Y and Pf62-X is a pair of allelic Y chromosome-linked and X chromosome-linked markers, and have been used to identify YY super-males, XY males and XX females for commercial production of all-male populations in yellow catfish (Pelteobagrus fulvidraco). However, the SCAR primers used previously have only two nucleotide difference, which restricts the wide utility because of nucleotide polymorphism. In this study, a continuous 8102 bp Pf62-Y sequence and a 5362 bp Pf62-X sequence have been cloned by genome walking, and significant genetic differentiation has been revealed between the corresponding X and Y chromosome allele sequences. Moreover, three pairs of primers were designed to efficiently identify YY super-males, XY males and XX females in an artificial breeding population, and to distinguish XY males and XX females in various wild populations. Together, the three new sex-specific genetic markers develop a highly stable and efficient method for genetic sex identification and sex control application in sustainable aquaculture of all-male yellow catfish.

Significant implications and application values of the all-male yellow catfish production have been evaluated [1][25][26]. However, these sex-linked SCAR markers used in all-male production were only tested in one artificial breeding population as reported, and the primers of Pf62-X and Pf62-Y have only two nucleotide difference [16]. In order to search for more accurate molecular markers for large-scale all-male production of yellow catfish, we performed genome walking and sequencing of the Y chromosome-linked marker Pf62-Y and X chromosome-linked marker Pf62-X, and analyzed the nucleotide divergence and genetic differentiation. Based on these studies, we developed three pairs of new markers that can efficiently identify the genetic sex of yellow catfish in breeding and wild populations.

The genomic DNA was extracted from fin clips of the XX female, XY male and YY super-male individuals using a standard phenol-chloroform method [27], and the quality and concentration of DNA were assessed by ethidium bromide-stained 0.7% agarose gel under ultraviolet light and by spectrophotometer as described previously [28].

BD Genome Walker™ Universal Kit (Clontech) was used to construct the DNA fragment pools. High quality genomic DNA sample extracted from XX female and YY super-male was divided into four portions, and four kinds of restriction enzymes: Dra I, EcoR V, Pvu II, Stu I were used to digest the DNA samples for 20 h respectively. Phenol/chloroform and 80% ethanol were used to precipitate and rinse the samples, and the digested genomic DNA was dissolved in 1xTE buffer (10 mM Tris, 0.1 mM EDTA). Each batch of digested genomic DNA was then ligated separately to the adapter sequence and used as templates. The adapter primers AP1, AP2 and walking primers listed in Table 1 were designed and synthesized. The genomic walking PCR programs were referred to the manual proposal as described previously [29][30].

The amplified products were examined by 1.0% agarose gel electrophoresis. Single and clear major bands (>500bp long bands) were extracted and purified from gel, and directly sequenced in both directions [31][32]. Sequence fragments were assembled by DNAMAN software.

To confirm the assembled sequence, a pair of primers, 62F (5'-GATCTGGTGACCTACAAAATTGACA-3') and 62R (5'-AAGCACGACTGGGCCAATGTTTCCATC-3') was designed according to both ends of the entire sequence. L-A Taq polymerase (Cat.No.A0901A, Takara) was used for amplification reaction through the following PCR program: denaturation in 94℃ for 30 seconds, annealing and extension at 68℃ for 9 minutes, 36 cycles. The PCR products were detected and purified by 0.8% agarose gel electrophoresis, and sequenced as described previously [33].

Genomic DNA was respectively extracted from fin clips of the artificial breeding and wild groups yellow catfish. Then, the genomic DNA of each sample was used for PCR amplification to detect male/female genotype by specific primers designed from the genomic walking sequence. Further, the physical sex of yellow catfish was determined by anatomical dissection.

Fig.1A summarized the genomic walking process for Pf62-Y sequence. Firstly, the genomic DNA extracted from YY super-male was digested with 4 different restrict enzymes such as Dra I, Pvu II, EcoR V and Stu I, and the digested fragments were ligated to adaptor respectively to construct four fragment pools. Then, the designed walking primers and adapter primers were used to amplify the corresponding genomic fragments from the constructed four DNA fragment pools, and the amplified fragments were sequenced. A total of 12 fragments were distinguished. As shown in Fig. 1A, three fragments (D1, D2 and D3) were amplified from the Dra I digested DNA fragment pool, two (P1 and P2) from the Pvu II pool, five (E1, E2, E3, E4 and E5) from EcoR V pool, and two (S1 and S2) from Stu I pool. The longest fragment (P2) contained 1786 bp, and the shortest (E5) was only 424 bp. These walking fragment sequences and the original Pf62-Y sequence were analyzed by DNAMAN software and assembled into a continuous 8102 bp Pf62-Y fragment (GenBank accession number: KF593811).

Moreover, an 8102 bp fragment was amplified from an YY super-male by PCR using L-A Taq polymerase (Fig.1B), and its sequence was identical to the assembled sequence from the walking fragments, which confirmed the genomic walking correction.

To reveal genetic difference between Pf62-Y and Pf62-X alleles, we further obtained a 5362 bp Pf62-X allele sequence(GenBank accession number: KF593812) from a XX female individual by genomic walking and PCR amplification using degenerate primers. Sequence alignment of the 5362 bp Pf62-X allele and the corresponding Pf62-Y allele shows that the nucleotide identity between them is 87.36%, implicating that there exists substantial genetic differentiation between the Pf62-X and Pf62-Y alleles (Fig.2). Interestingly, besides a large number of single nucleotide differences, Pf62-Y allele has some small segment deletion in comparison with the corresponding Pf62-X allele sequence. It seems to imply that the yellow catfish Y chromosome might be highly differentiated during the sex chromosome evolution process. 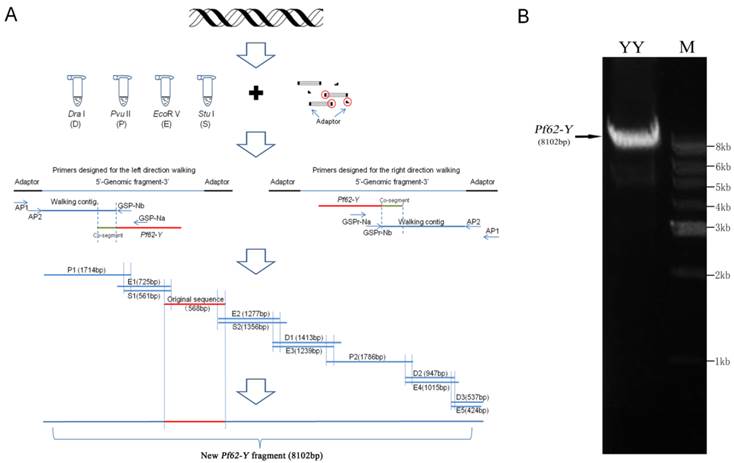 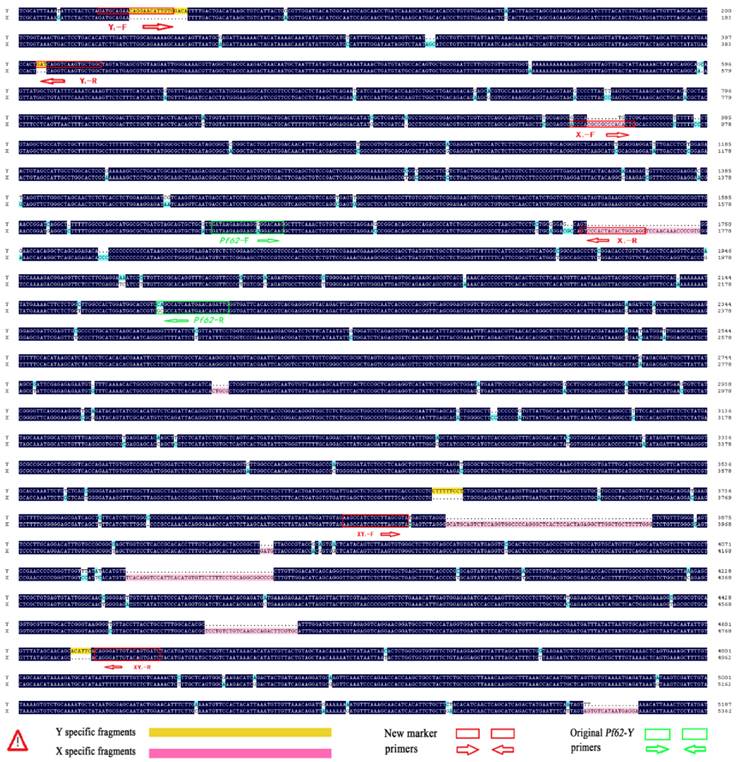 In order to test detection efficiency and applicable scope of the three new genetic markers, we collected different wild population samples of yellow catfish from 5 segregate lakes, such as Liangzi Lake in Wuhan of Hubei, Chang Lake in Jingzhou of Hubei, Hong Lake in Honghu of Hubei, South Lake in Zhongxiang of Hubei, and Dongting Lake in Changde of Hunan. The extracted genome DNAs were respectively used to identify genetic sex and their female or male phenotypes were affirmed by anatomizing ovary or testis. Fig. 4 shows the test results of three new genetic markers in Dongting Lake population samples. Consistent with the detection data in artificial breeding population, a Y chromosome-specific 398 bp fragment is amplified by the primer pair of Y1-F and Y1-R only in male individuals, whereas an X chromosome-specific 823 bp fragment is detected by the X1-F and X1-R primer pair in both of females and males. And, two different size fragments (X-fragment: 955bp, Y-fragment: 826bp) are amplified by the primer pair of XY1-F and XY1-R from the XY males, while only 955bp X-fragment is observed in XX females. 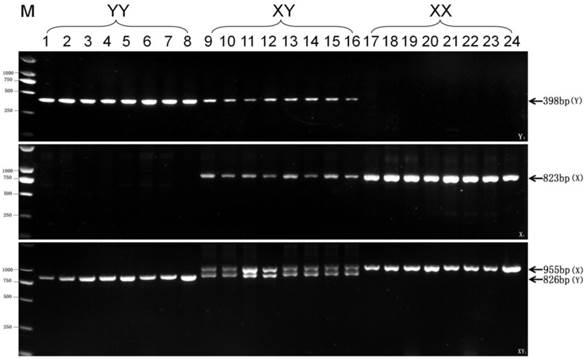 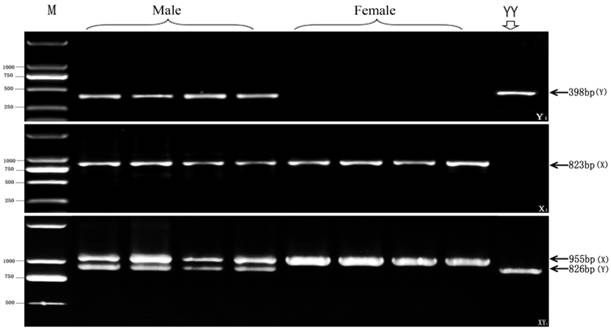 Test results of the XY1 marker in other four wild populations (8 male and 8 female individuals from each population) from Liangzi Lake (Wuhan), Hong Lake (Honghu) Chang Lake (Jingzhou), and South Lake (Zhongxiang). The 955 bp X-specific fragment and 826 bp Y-specific fragment amplified by XY1 primer pair are indicated by arrows on the right. The DL2000 DNA marker sizes are shown on the left. YY individual is the control for the YY super-male. 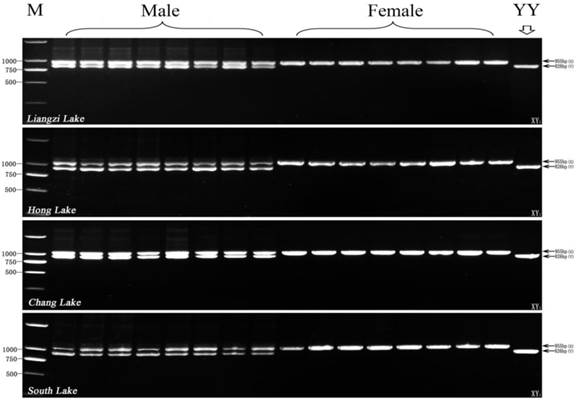 Furthermore, we used XY1-F and XY1-R primer pair to test four other wild populations sampled from Liangzi Lake, Hong Lake, Chang Lake, and South Lake. As shown in Fig. 5, two different size fragments (X-fragment: 955bp, Y-fragment: 826bp) are amplified by the primer pair of XY1-F and XY1-R from all of the male individuals in 4 wild populations, and only 955bp X-fragment is detected from all of the four wild population female samples. Altogether, the three pairs of new genetic markers (Y1, X1 and XY1) can efficiently use genetic sex identification of yellow catfish in all sampled populations, and their detection efficiency reaches to 100%.

This work was supported by grants from the special Fund for Agro-scientific Research in the Public Interest from the Ministry of Agriculture of China (2009030406), the National Key Basic Research Program (2010CB126301), the Innovation Project of Chinese Academy of Sciences (KSCX2-EW-N-04), and the Autonomous Project of State Key Laboratory of Freshwater Ecology and Biotechnology (2011FBZ17).