Primordial germ cells (PGCs), the founder cells of both female and male gametes, initially appear outside the gonadal region, and then are specified and migrated to the genital ridges [1-3]. The first discovered molecular marker for PGCs in fish is vasa [4, 5], while several other types of factors, such as Kit ligand, FGFs, leukemia inhibitory factor (LIF) and interleukin-4 (IL4) [6-9], have been shown to stimulate PGCs proliferation and/or survival in vitro. However, it is not clear what roles these factors have in regulating PGC development in vivo. Previously, Kawase et al. observed that addition of TNF-α to culture medium stimulated proliferation of PGCs without transforming them into embryonic stem cells, and that its effect was specific for the PGCs at younger stages before and during their migration to gonads [10]. C1q-domain-containing proteins have been shown to be members of TNF/C1q super-family, and to possess diverse functions in immune response, cell activity and organ development [11-14], but their roles in PGC development have not been observed so far.

Carassius auratus gibelio and Carassius auratus were obtained from Guanqiao Experimental Station, Institute of Hydrobiology, Chinese Academy of Sciences. During reproduction season, the mature fish was selected and artificially induced into spawning by two intraperitoneal injections with a mixture of acetone-dried carp pituitary, HCG and LRH-A as described previously [13,22]. Experimental protocols used here were approved by the animal care and use committee of Institute of Hydrobiology, Chinese Academy of Sciences.

Differential transcription of oocyte-specific C1q-like was analyzed by virtual Northern blotting as described previously [31]. Briefly, 1μg PCR product amplified by forward primer C1q-like-F (5'-GAGCTTGAGAAACTGAATGAC-3') and downstream primer C1q-like-R (5'-TGACTGCCATTGTTGTTCCAC-3') was labeled as the probe using DIG-High Primer system (Boehringer Mannheim). The α-tubulin control amplified by forward primer (5'-GTGCACTGGTCTTCAGGGGTT-3') and reverse primer (5'-GGGAAGTGGATGCGTGGGTAT-3') was done as the loading control. Semi-quantitative RT-PCR was carried out on 20 eggs and embryos at different stages of oogenesis and embryonic development as previously described [32]. The expression change of C1q-like regulated by miR-430 and miR-430 expression during embryo development was measured by quantitative RT-PCR as previously described [33]. α-tubulin was used as the internal control for RT-PCR. All the experiments were repeated at least three times.

The antisense DIG-labeled RNA probes used in our experiments were generated from CaOC1q, CagOC1q and vasa mRNA sequences, and whole-mount RNA in situ hybridization was performed as described [34,35]. All the procedures were RNase-free until the hybridization finished. Finally, embryos were stained with BCIP/NBT and visualized with a microscope. The pictures were taken with a Leica camera.

C1q-like morpholino (C1q-like MO) targeting the translation start codon of CaOC1q and control morpholino (Cont MO) were synthesized by Gene Tools, and subsequently injected into animal pole of fertilized eggs at the one-cell stage (10 ng per embryo, an optimal concentration without causing non-specific defects) as described previously [36]. The morpholino sequences were as follows: C1q-like MO, 5'-GCAGTACCATTTGTAAGACCACCAT-3'; Control MO (Cont MO), 5'-CCTCTTACCTCAGTTACAATTTATA-3'. MiR-430 mimic and control were purchased from Genepharma (Shanghai, China), and about 0.6 ng was injected in each embryo. After injection, embryos were incubated at 24.5°C in Holtfreter's medium, which was replaced by oxygen-enriched water one day later.

The full coding sequence of C1q-like was amplified and subcloned into pEGFP-N3 (provided by Dr. Qiya Zhang, Institute of Hydrobiology, Chinese Academy of Science) and pCS2+ vector (supplied by Dr. Shuo Lin, University of California, Los Angeles) to generate mammalian expression constructs. For rescue experiment, C1q-like ORF with 5-mismatch in the morpholino binding site (no change to the coding protein) was subcloned into the pCS2+ vector. The constructed vector was used for in vitro mRNA transcription to generate 5-mis rescue mRNA that could not bind to the morpholino. GFP-nanos1-3′UTR reporter was provided by Professor Erez Raz (Institute of Cell Biology, ZMBE, Germany). Capped RNAs were synthesized by SP6 RNA polymerase (Roche) with linearized plasmids, following the manufacturer's instructions. Then the RNAs were re-suspended in water and injected at a concentration of 100 ng/µL. The embryos of different development stages were detected by inverted fluorescence microscope (Leica) and photographed by CCD as described previously [37].

The 3′ untranslated region (3′UTR) of CaOC1q, which contains one putative miR-430 binding site, was amplified by PCR and inserted into the SacI and XhoI sites of the pmir-GLO vector (Promega). The binding site (GTACTT) for miR-430 within the 3′UTR of the CaOC1q gene was replaced with GCTAGC to generate a mutant control for the luciferase reporter assays. Grass carp (Ctenopharyngodon idellus) ovary cells (abbreviated as CO cells) were transfected with plasmids and microRNA mimics using Lipofectamine 2000 (Invitrogen) in 48-well plates. 48h post transfection, the cells were lysed and assayed for dual reporter (Firefly and Renilla) activity using a Dual-Luciferase reporter assay system (Promega) as described [38,39]. Relative reporter activities were determined by normalizing Firefly activity to Renilla activity.

Data was shown as mean ± SD. For statistical analysis, non-parametric Mann-Whitney U tests and ANOVA tests were performed with SPSS software (SPSS Inc.). A probability (P) of <0.05 was considered statistically significant. 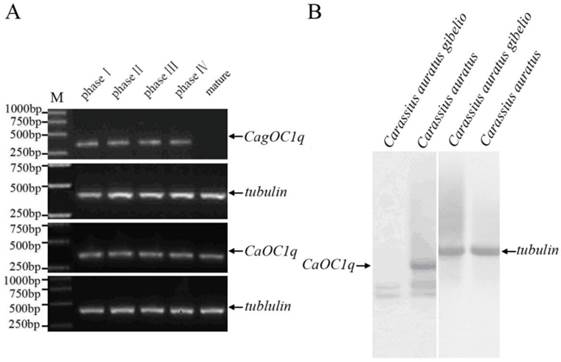 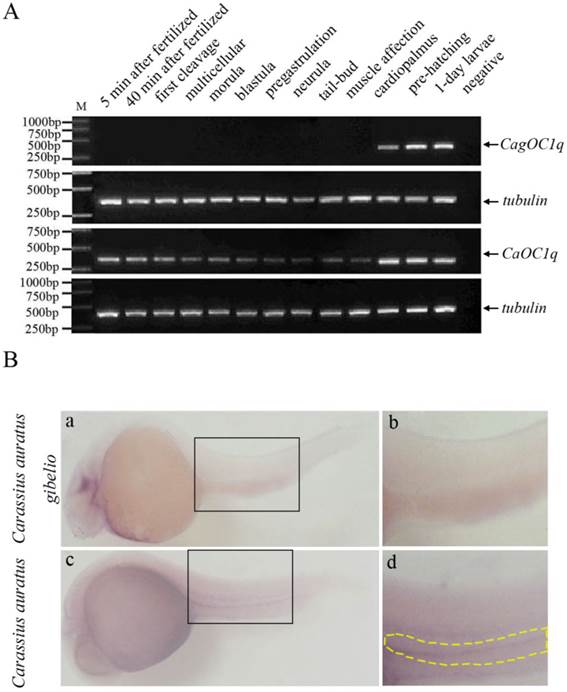 The existence of maternal C1q-like transcript in early embryos of Carassius auratus gave us a good chance to use morpholino-mediated knockdown to study functional role of the C1q-like in early embryonic development of fish. Firstly, we checked the efficacy of the designed morpholino by co-injecting morpholino with a CaOC1q expression construct fused with green fluorescent protein (GFP) into the fertilized eggs of Carassius auratus. C1q-like MO specifically reduced expression of GFP at cardiopalmus stage in 100% of embryos (n=100) (Fig. 3A). In comparison with strong GFP signal in the control group (Fig. 3A-a), there was no detectable signal when co-injected with the C1q-like morpholino (n=100) (Fig.3A-b). Finally, the inhibition efficacy of C1q-like MO was the same in Carassius auratus gibelio (n=100, data not shown). This revealed the ability of the C1q-like MO to inhibit protein production from its target sequence. Further, no obvious developmental abnormalities or mortalities were observed in either the C1q-like MO or Cont MO injected embryos (n=100, data not shown).

Furthermore, we observed one binding site for miR-430b in C1q-like 3'UTR, which contains only one mismatch within the seed-matched site (Fig. 5A). In teleost fish, miR-430 is essential for primordial germ cell development by targeting sdf1a, cxcr7, TDRD7 and nanos1 mRNA [28-30]. Although miR-430 was widely studied in zebrafish development, its function was unknown in Carassius auratus. Therefore, we evaluated the effect of miR-430 over-expression on PGCs development in Carassius auratus. Ectopic expression of miR-430 apparently reduced vasa-labeled PGCs in Carassius auratus compared with the control miRNA mimic, as shown by vasa antibody in situ staining (Fig.5B). The reduced level was above 50% indicated by the quantified data (Fig.5C). 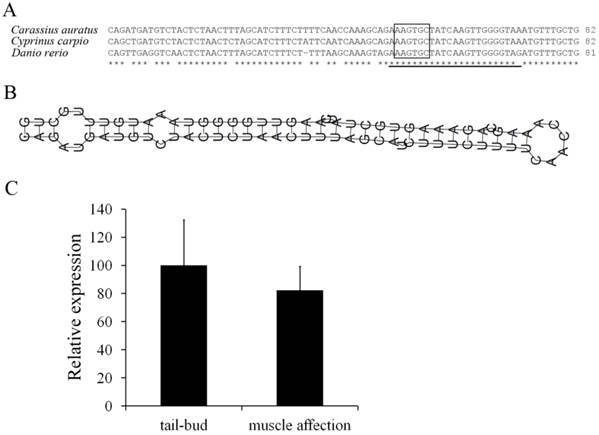 miR-430 regulates PGCs development in Carassius auratus. (A) Sequence alignment of C1q-like 3'UTR and miR-430. Red color letters represent seed sequence of miR-430 and its binding position. (B) Representative images of PGCs development in cardiopalmus stage embryos, as shown by vasa antibody immuostaining. (C) Quantification of PGCs numbers in the embryos injected with miR-430 mimic and its control. 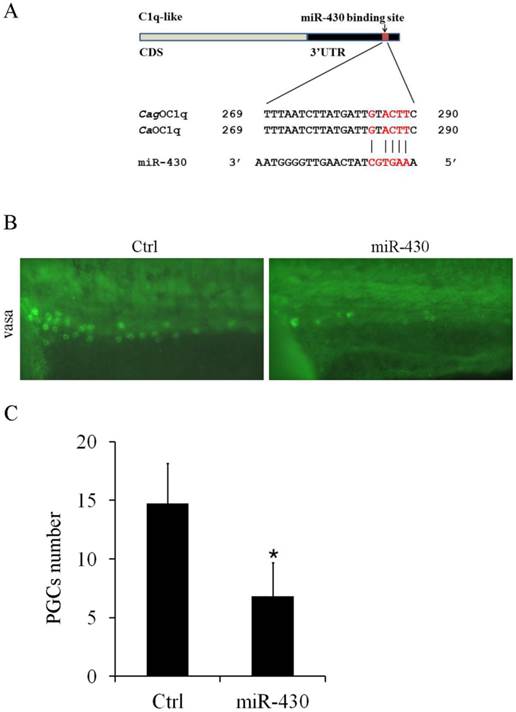 CaOC1q is an important target of miR-430

To determine the regulation of CaOC1q by miR-430, we firstly performed a luciferase reporter assay by linking the 3′UTR of CaOC1q to the C-terminus of Firefly luciferase present in pmirGLO vector. PmirGLO/3′-UTR and its mutant vectors (as described in methods) were co-transfected with miR-430 or control microRNA mimic into CO cells. Compared to control microRNA-mimics, luciferase activity was significantly reduced (up to 38%) when the PmirGLO/3′-UTR reporter was co-transfected with miR-430. In contrast, miR-430 did not change the activity of a luciferase reporter when the binding site for miR-430 in 3′UTR of CaOC1q was mutated (Fig. 6A). Furthermore, in vivo study showed that over-expression of miR-430 resulted in a significant decrease of CaOC1q expression compared with the control miRNA mimic in 30 hpf embryos (Fig. 6B). However, no difference in expression levels of CaOC1q were detected in 30 hpf embryos when CaOC1q express construct without its specific 3'UTR was co-injected with the control and miR-430 mimic (Fig. 6C). In addition, we injected pmirGLO/ CaOC1q 3′-UTR reporter at 1-cell stage, and found that CaOC1q mRNA expression was increased (Fig. 6D), for the reporter could bind to endogenous miR-430 and block CaOC1q degradation. Hence, the regulation of CaOC1q expression is specific to miR-430.

CaOC1q is a direct target of miR-430. (A) miR-430 suppressed the activity of pmirGLO reporter that is linked to the 3'UTR of CaOC1q, but not mutant 3'UTR of CaOC1q. The Firefly activity was normalized to Renilla expression, which was used as a control for transfection efficiency. (B) Over-expression of miR-430 reduced endogenous CaOC1q mRNA transcripts, as determined by qRT-PCR. (C) miR-430 had no effect on ectopic CaOC1q expression when embryos were injected with CaOC1q express construct without its specific 3'UTR. (D) CaOC1q mRNA expression was increased when embryos were injected with reporter which ectopically expressed CaOC1q 3′-UTR. 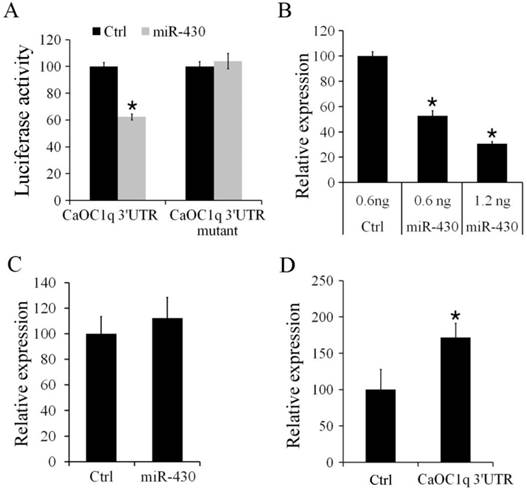 Recent studies have revealed several signaling pathways that regulate the proliferation, survival and migration of fish PGCs. For example, chemokine CXCL12 was found to regulate directional migration of PGCs through the G-protein-coupled receptor CXCR4 [47, 48]. IGF1Rb was shown to potentially regulate PGC development via cross-talk with chemokine signaling pathways [49]. In our previous work, zebrafish C1q-like was also demonstrated to be required for cell survival during embryonic development [14], and the sequence identity between zebrafish C1q-like and CagOC1q was relatively high (~70%). Our preliminary analysis indicated that in vitro over-expression of CagOC1q was able to protect FHM (fathead minnow) cells from ACTD induced apoptosis (data not shown). Further research will be undertaken to explore whether CaOC1q is essential for the cell survival of PGCs in vivo, and how C1q-like interacts with other molecular signals to control early embryo development.

This work was supported by grants to JF Gui from the National Key Basic Research Program (2010CB126301), the earmarked fund for Modern Agro-industry Technology Research System (NYCYTX-49), the Innovation Project of Chinese Academy of Sciences (KSCX3-EW-N-04), the Autonomous Project of the State Key Laboratory of Freshwater Ecology and Biotechnology (2011FBZ17), and by grant to J Mei from the Fundamental Research Funds for the Central Universities (52204-12018, 2013PY068), and the National Natural Science Foundation of China (31301931). Many thanks to Professor Erez Raz (Institute of Cell Biology, ZMBE, Germany) for kindly providing GFP-nanos1-3′UTR reporter.

4. Yoon C, Kawakami K, Hopkins N. Zebrafish vasa homologue RNA is localized to the cleavage planes of 2- and 4-cell-stage embryos and is expressed in the primordial germ cells. Development. 1997;124:3157-65

27. Svoboda P, Flemr M. The role of miRNAs and endogenous siRNAs in maternal-to-zygotic reprogramming and the establishment of pluripotency. EMBO Rep. 2010;11:590-7