SV40 T antigen is a well-known oncogene, and tumor cell would emerged in different kinds mice model of SV40 T antigen transgenic mice [1-4]. SV40 T antigen (T antigen) under the control of the rat insulin gene promoter region is used to produce Rip1-Tag2 mice, which is overt pancreatic β-cell tumor model [5]. This mice model is used to study tumor development and tumor angiogenesis. Even pancreatic tumor pathology of those model mice was standardized nomenclature with definitions [6, 7]. Generally the Rip1-Tag2 mice is not regard as metastasis animal model, however, we unexpectedly observed the micrometastasis in Rip1-Tag2 mice in tumor advanced stage that is not reported before. It is of great significance for studying the process of metastasis of cancer cell or the characteristics of metastasis cell.

As well known, in Rip1-Tag2 transgenic mice, T antigen and insulin are linked together in gene location and expression simultaneously cue to under the same promoter. T antigen inactivate of the Rb protein and P53 [8-14], targeting multiple cell function including regulate cell proliferation, death, immune responses and even the tumor microenvironment involved in that process [15-17]. With tumor development, T-antigen expression level is down-regulated as previous reports had said [18]. Although the tumorigenesis process is triggered by Tag, it remains unknown whether continuous T antigen expression is necessary for growth or metastasis cell in Rip1-Tag2 mice.

The Rip1-Tag2 (C57BL/6 mice as background mice) mice were purchased from The Jackson Laboratory, and C57/BL6 mice were obtained from Animal Center of Guangdong province (Guangzhou, China). The advanced stage of mice refers to about 14 weeks of Rip-Tag2 mice. The studies of transgenic mice and C57BL/6 mice were reviewed and approved by the Committees for Ethical Review of Research involving Animal Subjects at Guangdong Pharmaceutical University, China.

Mice pancreases and other tissues were fixed overnight in 4% formalin. Fixed tissues were rinsed in 1×PBS, subsequently dehydrated in 35, 50, and 75% ethanol, then embedded in paraffin. 10 μm sections were deparrafinized in xylene and rehydrated in 100, 95, 70, and 50% ethanol then 1×PBS. H&E staining of sections was carried out as previously described [21].

Immunohistochemistry (IHC) was performed as described on the web of Cell Signaling Technology, Inc (MA, USA), Primary antibody include T-antigen (1:100, Abcam), C-petide antibody (1:100, Abcam), and Insulin antibody (1:200, Fitzgerald), and second antibody system was purchased from Genetech (Shanghai, China). The slides for T-antigen and C-petide antibodies were treated with EDTA solution (pH=9.0) for antigen retrieval, while the slides corresponding insulin antibody was no treated for antigen retrieval.

Identification of the gene-type of Rip1-Tag2 mice. T-antigen gene was identified by using PCR assay. The lanes 2, 4, 5 indicated Tag2 were negative (-), but the lanes 3, and 6 show Tag2 were positive (+). Lane 1 was regard as positive control. M was indicated the Marker DL2000.

β cells of Rip1-Tag2 transgenic mice secrete insulin, and SV40 T antigen (T antigen) under insulin promoter express simultaneously. β cells developed a multi-stage pancreatic tumor (As shown in Fig.2), about 1-3 weeks, it was known as “Normal stage”, in which Islet cell had no difference with C57BL/6 mice (Fig 1A); At 4-5weeks of age, hyperplastic islet/dysplastic began to appear, most of cell nuclear/cytoplasm ratio increases, but the vascular system remained quiescent at this stage (Fig 2B). From about 6 weeks, it began to appear angiogenic Islets and different sizes of angiogenic Islets were formed, We could see the nuclear/plasma ratio remained increasing, and the vascular system was activated as well as branch multiplied (Fig 2C). In 9-10 weeks tumor appeared, nuclear/cytoplasm ratio and cell density reached the highest, and the vascular network was densely developed (Fig 2D), In the advanced stage about 14 weeks (Fig 2E and 2F), about half of the tumors infiltrated into the surrounding acinar tissue. 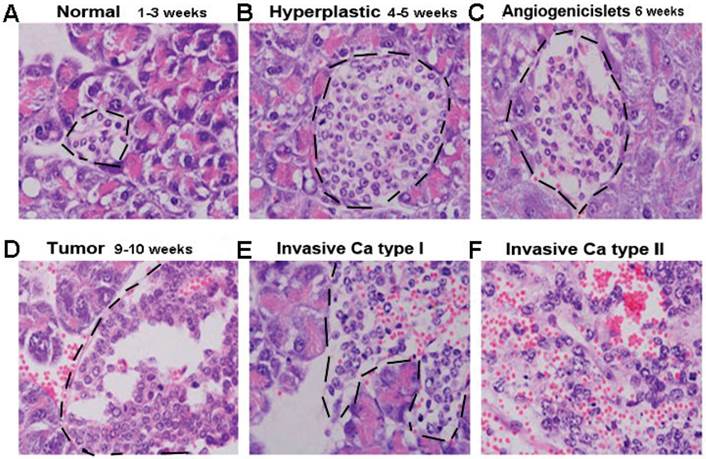 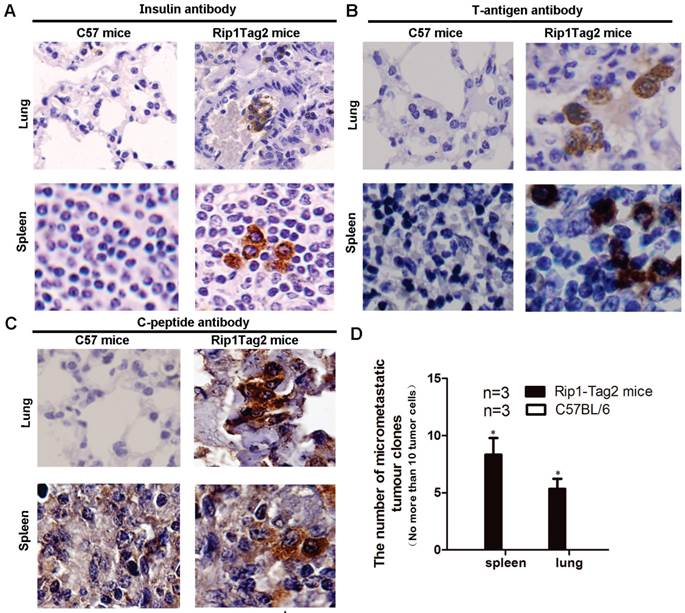 Pathological structure of lung and spleen in advanced stage were damaged

Pathological structures altering in lung and spleen in advantage stage. A. Reactive hyperplasia of lymphoid tissue in spleen in Rip-Tag2 mice and C57BL/6 mice (background) as control. B. Thickening and bleeding of the alveolar septa, congestion of capillary, hemorrhagic foci (pink dot) was observed in lung of Rip1-Tag2 mice. Microscope magnification: 400×. 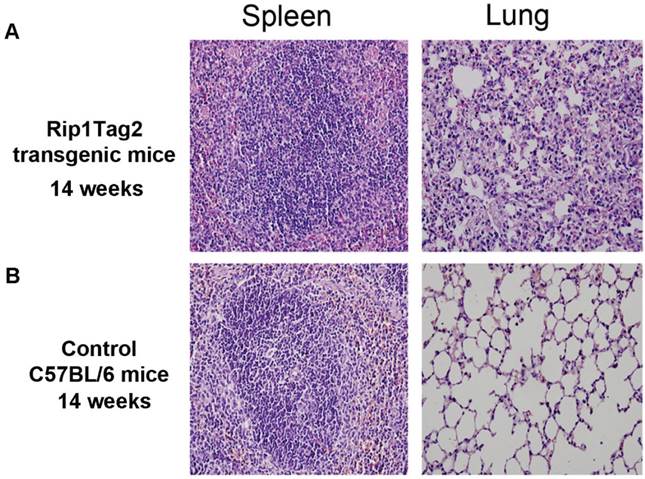 Rip1-Tag2 mice have been used as pancreatic islet β cell tumor model for studying angiogenesis, cancer development and autoimmunity etc. In many reports, with the growth of transgenic mice, islet β cell tumor begin to happen in transgenic mice [4, 22] and the pathologic structure of pancreas will alter with mice age. There is a trend toward loss islet morphological structure in advanced stage of tumor. And we also confirmed that the pancreatic islets undergo from incipient neoplasia to advanced stage of tumors. T antigen was regarded as manipulating under insulin promoter which is essential for both the initiation of the tumor transformed state [22-25].

In this transgenic mice model, Insulin is linked together T-antigen in gene location under control insulin promoter, and we confirmed that T antigen and insulin both are down-regulated in invasive carcinoma stage by IHC analysis, which is consistent with previous reports [26, 27]. Generally speaking, the micrometastasis may happen in multiple tissue in advanced stage of tumor patients, and we also observed a few of micrometastasis in spleen, and lung in transgenic mice, this results maybe is analogous to thing that we see in tumor patient. Lung and spleen structure damage demonstrates that it may produce subtle influence on organ structure and their function with the developing of tumor and micrometastasis. Micrometastasis tumor cell has potent effects on lung and spleen in advanced stage (14 weeks), which may result in chronically cancer microenvironment and structure change.

In summary, the results demonstrated the micrometastasis cell may be derived from pancreatic islet expressing insulin at early stage, because in invasive carcinoma stage its expression is down-regulated, lastly affecting on the organs tissue structure. Alternatively, micrometastasis left at invasive carcinoma stage, then go back an undifferentiated cell state to secrete insulin. micrometastasis have cancer stem cell feature similar to the original pancreatic β cell. Of course, further study is still needed to explore these metastatic sporadic tumor cell.

17. Evans A, Costello E. The role of inflammatory cells in fostering pancreatic cancer cell growth and invasion. Frontiers in physiology. 2012;3:270

22. Kimura G, Itagaki A. Initiation and maintenance of cell transformation by simian virus 40: a viral genetic property. Proceedings of the National Academy of Sciences of the United States of America. 1975;72:673-7

24. Brockman WW. Transformation of BALB/c-3T3 cells by tsA mutants of simian virus 40: temperature sensitivity of the transformed phenotype and retransofrmation by wild-type virus. Journal of virology. 1978;25:860-70