This is an open access article distributed under the terms of the Creative Commons Attribution (CC BY-NC) License. See http://ivyspring.com/terms for full terms and conditions.
Citation:
Liu W, Wang SJ, Lin QD. Study on the Expressions of PHD and HIF in Placentas from Normal Pregnant Women and Patients with Preeclampsia. Int J Biol Sci 2014; 10(3):278-284. doi:10.7150/ijbs.6375. Available from https://www.ijbs.com/v10p0278.htm

Methods: Subjects were chosen from the in-patients or the out-patients from May 2003 to May 2004. They were divided into 5 groups: early pregnancy group (EP), 13 cases; middle pregnancy group (MP), 9 cases; late pregnancy group (LP, or control group), 12 cases; preeclampsia (PE) group, 20 cases; gestational hypertension group (GH), 10 cases. The mRNA expressions of PHD-1 and -2 and -3 in placentas from all the subjects were assessed by in situ hybridization and Real-time PCR. The expressions of HIF-1α and -2α in placentas from different groups were assessed by immunohistochemistry and western blot.

Preeclampsia is characterized by the onset of hypertension and proteinuria during gestation [1]. Advanced-stage clinical symptoms include seizures, renal failure, IUGR, and/or HELLP (hemolysis, elevated liver enzymes, and low platelets) syndrome [2]. If without proper treatment, it can develop into eclampsia, which was the life-threatening occurrence seizure during pregnancy [1, 2]. Preeclampsia affects approximately 6-8% of all pregnancies worldwide [3], with onset of symptoms in the late second or third trimester, most commonly after the 32nd week. In China, hypertensive disorders in pregnancy companied with preeclampsia ranks the second leading cause of maternal mortality [4].

The foremost hypothesis regarding the initiating event in preeclampsia is that insufficient trophoblast invasion and abnormal spiral artery remodeling placental ischemia, which initiates the hypoxia stress and endothelial dysfunction [5]. Those subsequently lead to the clinical symptoms for preeclampsia [6]. Proper cellular response to changes in oxygen tension during normal development or pathological processes is ultimately regulated by the transcription factor hypoxia-inducible factor (HIF) [7]. The active form of HIF is a heterodimeric comprising of subunit α, which is oxygen-sensitive and rapidly degraded and inactivated during normoxia, and a constitutively stable subunit β [7]. HIF is highly expressed in the low oxygen environment of the placenta in early gestation, playing an important role in placental development and function [8]. HIF has been shown to be abnormal up-regulated in preeclamptic placentas [9-14].

The stability of the HIF-α subunit is regulated by oxygen-dependent prolyl 4-hydroxylation catalyzed by HIF prolyl 4-hydroxylases (PHD) [15]. There are three PHD isoforms that have been identified: PHD-1, -2 and -3 [16, 17]. Under conditions of normoxia, PHD catalyzes the formation of the 4-hydroxylation of HIF targeting it for poly-ubiquitination and proteosomal degradation mediated by the von Hippel-Lindau protein [18]. However, under hypoxic conditions, PHD activity is inhibited, thereby allowing HIF to accumulate and translocate to the nucleus, where it promotes the expression of its target hypoxia-responsive genes [18]. Although PHD is the essential regulator of HIF, and HIF plays a critical role in the pathogenesis of preeclampsia, indicating that PHDs also involves in the preeclampsia. Indeed, a previous work showed that PHD-2 was related to early- preeclamptic placentae but not late- preeclamptic placentae.

In the present work, we comprehensively investigated the expression of PHD and HIF of trophoblast in preeclampsia placenta. Our results showed that preeclampsia was coupled with low level of PHD-1 and high expression of HIF-2α, suggesting that activated hypoxic response is related to hypoxic dysfunction of trophoblast. These results also highlight that hypoxia response will be potential therapy targeted for preeclampsia.

This study was conducted according to the principles expressed in the Declaration of Helsinki. The study was approved by Institutional Review Board of Ren Ji Hospital of School of Medicine, Shanghai Jiao Tong University. All patients provided written informed consent for the collection of samples and subsequent analysis.

Under aseptic conditions, a few pieces of placenta tissue, after being taken out from middle pregnant and late pregnant group, with the size about 0.5 × 0.5 × 0.5cm3 was taken from center parts of maternal side by sterile scissors and tweezers. For early pregnancy group, the whole placental villus was taken after abortion surgery. All of these tissues were rinsed with sterile saline 2 or 3 times to wash away the hemorrhage followed by placing in 10% neutral buffered formalin or freezing in liquid nitrogen for further analysis.

SPSS11.0 software was used for t test or t' test (for unequal variances), and Pearson correlation analysis of the data.

The pregnancy-dependent expression of PHD in normal placenta

Clinical Parameters Of Control And Preeclampsia. 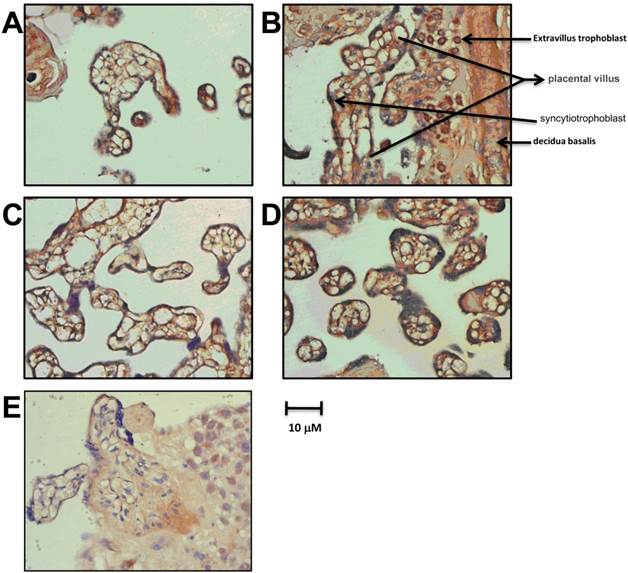 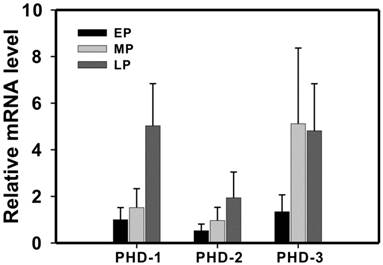 The expression of PHDs in preeclampsia and gestational hypertension groups

The level of PHD-1mRNA in preeclampsia group was significantly lower than that of control group (P<0.05) (Figure 3). Although PHD-1 of hypertension groups was also lower than control group, there was no statistically significant difference between them (Figure 3) (P<0.05). We also compared the expression level of PHD-2 and-3 between preeclampsia and control groups. However, they both showed no significant difference. There results showed that preeclampsia could significantly lead to PHD-1 low expression in placenta, while having minor effect on PHD-2 and -3. Among the clinical manifestations, placental weight was the only one having significant positive correlation with PHD-1 mRNA (R=0.457, P<0.05) (Table 2). This meant that the decreased of PHD-1 mRNA expression would resulted in lighter placenta. 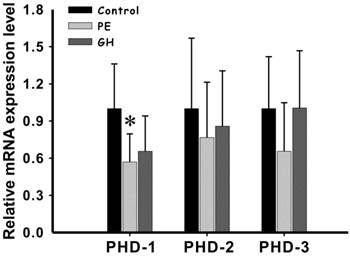 The correlation analysis between PHD-1 mRNA and HIF-2α protein in placenta from PE group and clinical manifestation.

As PHD directly involved in the degradation of HIF, we then investigated how the low level of PHD-1 in preeclampsia placenta affected the protein level of HIFs. The expression of both HIF-1α and HIF-2α in preeclampsia placenta was detected by immunohistochemistry. Both of them were predominately expressed in syncytiotrophoblast leaf cells and trophoblastic villus cells (Figure 4). HIF-2α of preeclampsia group was significantly higher than that of control group (P<0.001) (Figure 5). However, HIF-1α protein level showed no significant difference between these two groups (Figure 5). We also analyzed the correlation between HIF-2α and clinical manifestations. HIF-2α was correlated with both the onset time (P <0.01) and preterm birth (P <0.05). The relationship between preeclampsia onset time and the HIF-2α level was significantly negative correlation. 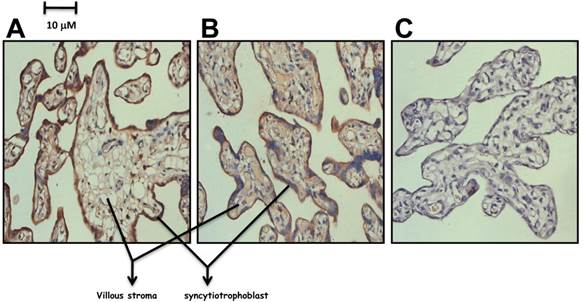 Both physiological hypoxia stage in the normal pregnancy (before 12 weeks of pregnancy) and preeclampsia could induce the high expression of HIF-α in trophoblastic cells [12, 13]. HIF-α played an important role in early placenta development [19]. The high expression of HIF-α, which was an indicator of the over-activation hypoxia response, is thought to be a major cause of preeclampsia pathogenesis [11]. To elucidate the pathology of preeclampsia, it would be necessary to investigate the underlining mechanism which regulates the hypoxia response pathway mediated through HIF-α in placental trophoblastic cells.

PHD hydroxylates some specific prolines in the alpha subunit of the hypoxia-inducible transcription factor (HIF) and controls its stability in an oxygen-dependent manner. In normoxia two prolines in the oxygen-dependent degradation domain of the HIFα subunit become hydroxylated by the PHD. The 4-hydroxyproline residues of HIFα facilitate binding of HIFα to the von Hippel-Lindau E3 ubiquitin ligase complex leading to subsequent ubiquitination and instant proteasomal degradation in normoxia. The PHD reaction is inhibited in hypoxia, HIFα evades degradation and forms a functional dimer with HIF β activating the HIF target genes. Therefore, PHD functions as effective oxygen sensor.

We present work firstly study the PHDs mRNA expression pattern during normal gestation. PHDs were mainly expressed in syncytiotrophoblast leaf cells and trophoblast cells with PHD-1 mRNA specifically highly expressing in extravillous trophoblast cells (Figure 1), suggesting that PHDs was closely related to trophoblastic invasion activity. As pregnancy processes, both the expression levels of both PHD-1 and PHD-2 mRNAs increase synchronously. The enhancement of PHD-1 mRNA is significant, while PHD-2 was not. The expression of PHD-3 reaches to the highest in middle pregnant group and do not increase anymore in late pregnant group. The different expression patterns of PHDs indicated that PHD-1 and PHD-2 cooperate to function in the growth and development of trophoblast cells. Previous work has revealed that PHD-1 and -2 are more efficient in hydroxylating Pro564 of HIF-α than PHD-3, and that only PHD-3 could not hydroxylate Pro402 [20]. As the pregnancy progresses, the trophoblast cells gradually increase the oxygen sensitivity. These results indicated that the oxygen sensitivity of trophoblastic cell was regulated by PHD during normal pregnancy process. In the early state of pregnancy, low oxygen-sensitive of trophoblastic cells leads to hypoxia Under hypoxic condition, the invasion activity of trophoblastic cell was significantly enhanced, which in turn is conducive to placental vascular remodeling process [21]. With the progress of pregnant progress as well as placental vascular remodeling, trophoblast cells gradually increase the oxygen sensitivity and switch to the high-oxygen state. Under that condition, invasion activity and the translation factor involving in hypoxia response were inhibited.

Through the investigation on the PHDs expression in preeclampsia, we find that PHD-1 mRNA in preeclampsia patients was significantly lower than that of normal pregnant women, implying that the declined oxygen sensitivity of preeclampsia placenta. However, pregnancy-induced hypertension patients exhibit no significant difference in PHD-1 level. These results show that the oxygen sensitivity of trophoblast cells in preeclampsia placenta is different from normal gestation. Preeclampsia patients still remain high oxygen sensitivity in the late state of pregnancy. As a consequence, HIF-2α remains high expression level even under the adequate oxygen due to the declined PHD. Our work also show that HIF-1α did not show abnormal expression in preeclampsia placenta, suggesting it does not involves in the pathological process. PHD-1 was correlated with placental weight but not the onset time and preterm birth. The decreased PHD-1 would lead to the abnormal accumulation of HIF, which representatives a lower O2 tension. In this situation, hypoxia response would be continuously activated, which in turn altered the metabolism of placenta cell. We proposed that the altered metabolism pattern disturb the growth of placenta and led to lighter placenta.

HIF-2α was correlated with both the onset time (P <0.01) and preterm birth (P <0.05). High level of HIF-α would activate its target hypoxia-related genes expression, including vascular endothelial growth factor (VEGF), erythropoietin, leptin and so on. These proteins would trigger systemic vascular endothelial cell dysfunction, leading to a series of clinical manifestations of preeclampsia. Based on the previous reports and our present work, we propose a possible model for the pathology of preeclampsia. Certain immune or genetic factors lead to functional deficiency of trophoblast cells, which in turn subsequently restricts the capability of trophoblastic invasion and placental vascular recast. In addition, the trophoblastic oxygen sensitivity was also inhibited in the late state of pregnancy, which was indicated by the low expression of PHD-1. As a consequence, HIF-α is pathologically accumulated, which finally leads to the onset of preeclampsia (Endothelial cell toxicity symptoms of trophoblastic hypoxia). The present work highlights that PHD and HIF could be the potential targets for preeclampsia therapy. To ultimately understand the preeclampsia pathogenesis, the functions of different proline hydroxylase family members on HIF regulation and placenta development as well as pathology of preeclampsia was worthy of further investigation.