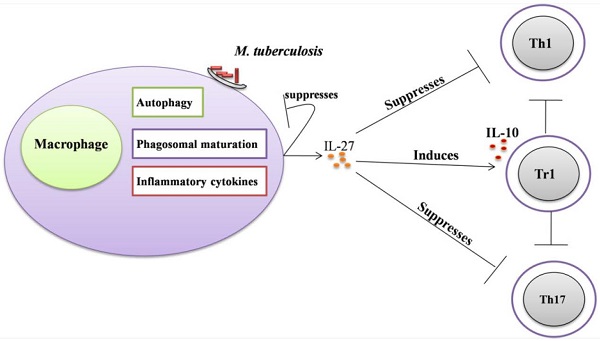 IL-27, a heterodimeric cytokine of IL-12 family, regulates both innate and adaptive immunity largely via Jak-Stat signaling. IL-27 can induce IFN-γ and inflammatory mediators from T lymphocytes and innate immune cells. IL-27 has unique anti-inflammatory properties via both Tr1 cells dependent and independent mechanisms. Here the role and biology of IL-27 in innate and adaptive immunity are summarized, with special interest with immunity against Mycobacterium tuberculosis.

Tuberculosis remains a leading cause of death worldwide which afflicts approximately one-third of the world's population and claims a death toll around 1.2 million annually [1].

Mycobacterium tuberculosis (Mtb) is an unusual facultative intracellular pathogen which multiplies within macrophage [2]. Macrophages are crucial for the innate and adaptive immune response to Mtb because of their potent antimicrobicidal activities, antigens-presenting abilities, secretion of inflammatory mediators such as the IL-12 family of cytokines [3, 4], and their role in granuloma formation to control the pathogen [5-7]. However, Mtb can persist within granuloma lifelong without clinical symptoms [3, 4, 8]. In-depth understanding of the underlying molecular mechanisms can inspire better drug design and treatment of TB.

IL27 is a heterodimeric cytokine consisting of p28 and Epstein-Barr virus induced gene 3 (EBI3) subunits [16, 44]. EBI3 expression is high in human B lymphoblast cell lines transformed in vitro by EBV, activated APCs and placental syncytiotrophoblasts [16, 45]. EBI3 is a 34-kDa glycoprotein similar to the p40 subunits of IL-12 [46]. The EBI3 reversibly binds to IL-12p35-related subunit, namely p28, to form heterodimeric cytokine IL-27[46, 47]. The connection between p28 and EBI3 is labile and these subunits can be secreted independently [16]. EBI3 is also capable of binding to the IL-12p35 to form IL-35 [48]. The human p28 gene encodes a 24.5kDa polypeptide [16]. The p28 is structurally similar to an IL-6/IL-12 family, composed of a long chain of four α helix bundle named A-D from the N terminus to the C terminus[49]. The polypeptide loop connecting the p28 C and D α helices contains a stretch of polyglutamic acids (poly-E) unique among helical cytokines and is highly conserved [50]. The p28 alone can suppress IL-27 mediated Th1 responses [51] and IL-6 mediated signaling [52]. These data suggest a regulatory role of p28 in IL-27-mediated immune response.

A polymorphism (-964A>G) in the p28 promoter has been noted in certain diseases such as asthma [53], inflammatory bowel diseases [54], chronic obstructive pulmonary disease[55], and epithelial ovarian cancer [56], which seems to be associated with an increase in disease susceptibility. However, the effects of SNPs on the expression of IL-27 remain elusive.

IL-27 is mainly produced by activating APCs such as DCs and macrophages (figure 1). Macrophages-stimulated with TLRs agonists, (polyinosinic: polycytidylic acid (poly (I:C)), Lipopolysaccharide (LPS), or R848 can induce both subunits of IL-27 [13]. It has been reported that p28 production is completely dependent on the TLR4-associated myeloid differentiation factor 88 (MyD88) mediated pathway and partially dependent on NF-κBc-Rel transcription factor [14]. MyD88 also regulates p28 expression through binding of AP-1/c-Fos to the p28 promoter in both human and mouse macrophages. However, the binding of c-Fos to the p28 promoter can be blocked by overexpression of p38 MAPK [57]. In addition, TLR4 can induce the expression of p28 subunit through activating the TIR domain-containing adaptor inducing IFN-β (TRIF) and IFN regulatory factor 3 (IRF3) pathways [58]. TLR2, TLR4, and TLR9-associated MyD88 are required for the induction of EBI3 expression through binding of NF-kB subunits (p50/p65) and PU.1 to the EBI3 promoter [59].

Signaling involved in IL-27 expression. IL-27 is largely produced by Antigen-presenting cells (APCs) such as Dendritic cells (DCs) and macrophages upon stimulation with TLRs agonists, IFN-α, IFN-γ or microbial infections. It consists of two subunits (p28/EBI3) which are expressed independently. TLR2, TLR4 and TLR9-associated MyD88 can induce EBI3 expression through the binding of NF-𝛋B subunits (p50/p65) and PU.1 to the EBI3 promoter. TLR4-associated MyD88 induces p28 expression through binding of NF-𝛋B-c-Rel and AP-1/c-Fos to the p28 promoter, TLR4-associated TRIF induces p28 expression by binding of IRF3 to the p28 promoter. The IFN-α and IFN-γ induces p28 expression through the binding of IRF3 and IRF8 to the p28 promoter, respectively. In addition, IFN-γ-mediated IL-27 instead of IL-27p28 gene expression is positively regulated by the C-Jun N-terminal kinases (JNK), mitogen-activated protein kinases (MAPKs) and the phosphoinositide 3-kinase (PI3K). 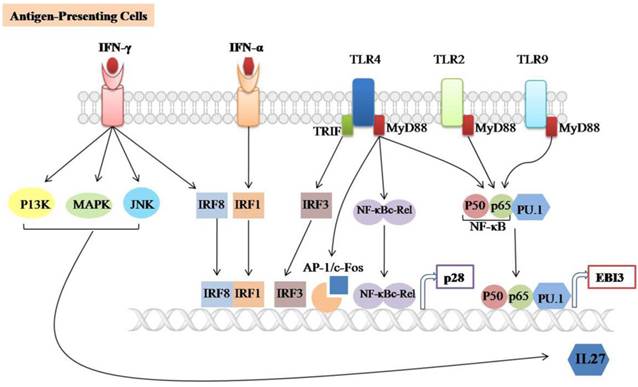 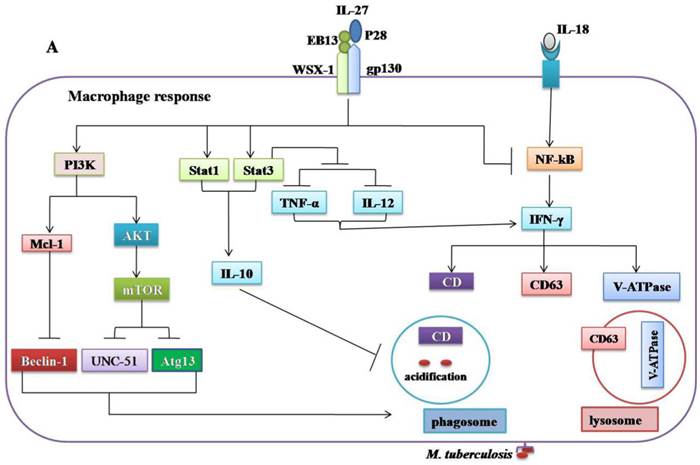 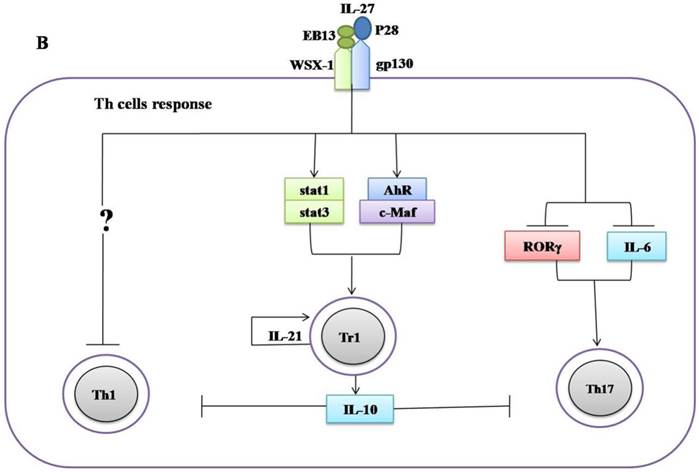 IFN-alpha can promote the production of IL-27 by enhancing the expression and binding of IRF-1 to the IFN-stimulated response element (ISRE) in the p28 gene promoter [13]. Likewise, IFN-γ induced IRF-8 expressions can upregulate p28 gene transcription in synergy with IRF-1 [15]. IFN-γ can selectively induce IL-27 expression via activating the C-Jun N-terminal kinases (JNK), MAPKs and the phosphoinositide-3-kinase (PI3K) signaling in primary human monocyte[60]. Many molecular details of the negative regulation of IL-27 expression remain to be determined.

The pro-inflammatory role of IL-27 as key inflammatory mediator for Th1 differentiation and IFN-γ production has been intensively explored [16, 63, 65]. Stimulation of Th0 in the presence of IL-27 induces the expression of the key signature Th1 cytokine IFN-γ via up-regulating of the transcription factor T-bet and IL-12Rβ2 chain which is essential for responding to IL-12 and the differentiation of a Th1 phenotype [61, 62, 65]. This effect of IL-27 on Th cell depends on multiple transcription factors such as Stat-1 and Stat-3 [61, 62, 65]. In vivo studies demonstrated the role of IL-27 in Th1 responses. In this context, it was shown that WSX-1-/- mice were more susceptible to Leishmania major infection and impaired IFN-γ production [17]. Similarly, reduced Th1 responses and IgG2a production was demonstrated in WSX-1-deficient mice infected with Listeria monocytogenes [18]. Moreover, it was shown that IL-27R signaling is vital in vivo for the IFN-γ production by CD8+ T cells [66]. IL-27 can enhance the proliferation of naïve CD8+ T cells and IFN-γ and granzyme B production dependent on Stat1 and Stat3 [22].

The negative feedback of IL-27 largely depends on the induction of type 1 regulatory T cells (Tr1). IL-27 can induce Tr1 cells via various mechanisms including activation of Stat1, Stat3 [75-76], upregulation of Blimp1 [77], aryl hydrocarbon receptor (AhR), transcription factor c-Maf, inducible T cell costimulator (ICOS), and IL-21 production, which is indispensable for the expansion and maintenance of Tr1 cells [34, 35]. Furthermore, the anti-inflammatory effect of IL-27 needs more than the induction of Tr1 cells. IL-27R-/- CD4+ T cells produce more IL-2 than wild-type during in vitro differentiation. The addition of recombinant IL-27 suppressed the expression of IL-2 both transcriptionally and translationally [78]. IL-27 suppresses CD28-mediated IL-2 production by Stat 1 which in turn induces the expression of the suppressor of cytokine signaling 3 (SOCS3) [79]. Moreover, it was observed that WSX-1-deficient macrophages are more efficient in inducing IFN-γ and IL-17A production by CD4+ T cells than control. IL-27 can activate stat1 which in turn suppresses cyclooxygenase (COX) expression and followed by reducing prostaglandin (PG2) secretion, which can affect the CD4+ T cell responses [80].

IL-27 was also reported to suppress Th2 cells development and their cytokines production by downregulation of Gata3 and upregulation of T-beta in differentiated Th2 cells [32]. In addition to suppress both Th1 and Th2 cells, IL-27 can inhibit the development of Th17 cells. Consistently, it was demonstrated that IL-27 can inhibit Th17 cell development through various mechanisms including the suppression of IL-6 signaling mediated IL-17 production [33], retinoid-related orphan receptor γ (RORγ) expression (Th17-specific transcription factor) [36], and also via induction of the IL-10 production [81], and programmed death ligand 1 (PD-L1) on naïve T cells [37]. IL-27 upregulates the expression of Blimp1 in pre-committed Th17 cells and acquired a Tr-1-like phenotype characterized by the production of IL-10 and IFN-γ [77].

More recently, it was recognized that IL-27 can inhibit the development of Th9 cells and limit its related encephalitis by mechanism partly depending on Stat-1 [82]. Taken together, IL-27 induces an immunosuppressive effect by both Tr1 cells dependent and independent mechanisms. However, the contribution of IL-27 in the induction of IL-35-producing T regulatory cells remains unknown.

The innate immunity plays a decisive role in the early clearance of Mtb via the recognition of the antigen and subsequent induction of pro-inflammatory cytokines and antimicrobial peptides [83]. The production of IL-27 in response to Mtb infection modulates macrophage responses [41-43]. The combination of IL-12 and anti-IL-27R can limit Mtb growth via upregulation of pro-inflammatory cytokines such as TNF-α, IFN-γ, and IL-18[41, 84]. However, the molecular mechanisms by which IL-27 negatively regulated macrophages during Mtb infections remain unclear. It was demonstrated that IL-27R singling in mice peritoneal macrophages suppresses IL-12 and TNF-α production by Stat3 [43]. IL-27 can antagonize IL-18 signaling in human macrophages challenged with Mtb by inhibiting the expression of the IL-18 receptor beta-chain and IL-18R downstream signaling component NF-kB [42]. IL-18 and IL-12, synergistically induced IFN-γ production by human macrophages and promoted the killing of Mtb [84]. It has been shown that IL-27 can inhibit the expression of the phagosomal vacuolar ATPase (V-ATPase) and lysosomal integrated membrane protein-1 (CD63), resulted in the suppression of phagosomal acidification and cathepsin D maturation [85]. IL-27 signaling is necessary for the IL-10 production by macrophages through enhancing the activity and binding of Stat1/Stat3 to the IL-10 promoter [86]. Recently, it was found that IL-10 induced by Mtb during macrophage infection can manipulate phagosomal maturation to enhance its own intracellular growth [87]. Most recently a study demonstrated that IL-27 suppresses IFN-γ mediated autophagy in human macrophages infected with Mtb by inducing autophagy negative regulatory factors mTOR and Mcl-1 through JAK/PI3-K/Akt and PI3-K pathway, respectively [88]. In brief, Mtb can subvert the normal bactericidal function of macrophages by inducing IL-27 (Figure 2A, Table 1).

The consequence of IL-27 signaling in tuberculosis

Ablation of IL-27, either by disruption of the IL-27R gene in mice or by an antibody blockade of the IL-27R, implicates an important role of IL-27 in adaptive immunity against mycobacteria infections. WSX-1-deficient mice have impaired IFN-γ production and granuloma formation when challenged with M. bovis BCG [89]. However, there are no differences in liver pathology and bacterial load between mutant and wild type mice [89]. Significant elevation of IL-27 throughout the infanthood and neutralization of IL-27 in neonatal macrophages improved control of bacterial replication [90]. Furthermore, blockade of IL-27 during incubation with the M. bovis (BCG) augmented the IFN-γ production by allogeneic CD4+ T cells [90]. Similarly, it has been demonstrated that improved control of Mtb growth in the lungs results from increased production of pro-inflammatory cytokines in WSX-1-knockout mice [43]. These results suggest that IL-27 negatively regulated Th1 response (Figure 2B, Table 1), however, the underlying mechanisms remain elusive.

More recently, it was recognized that IL-27 positively regulates IL-10 producing Tr1 cells during chronic inflammation [34, 35, 75-77] (Figure 2B, Table 1). It has been demonstrated that IL-10 suppressed the immune response to Mtb infections without immunopathology observed in both C57BL/6 and CBA/J mice [91, 92]. Moreover, it was shown that IL-10-deficient mice were more resistant to M. bovis (BCG) challenge in comparison to control mice [93]. Blocking of IL-10R in CBA/J mice improved M. bovis (BCG) evoked protection against Mtb characterized by enhanced Th1 and Th17 responses and increased IFN-γ and IL-17A production in the mice lungs [94]. Taken together, these data indicate IL-27 can modulate immune response against mycobacteria by inducing IL-10.

As an exceptional successful silent killer, Mtb can manipulate the host signaling to persist and reactivate at opportune occasion. Knowledge about the emerging player, namely IL-27, will inform better countermeasures against this hideous threat of global health public.