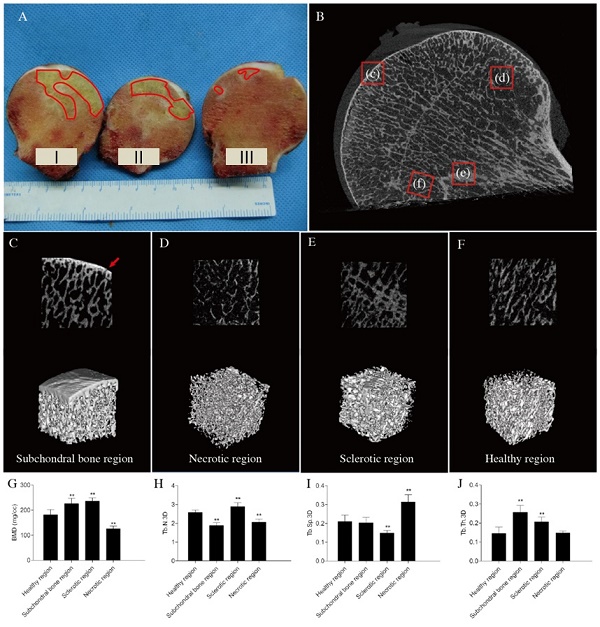 The most common etiology of ONFH is use of corticosteroids (51%), followed by use of alcohol (31%) [4-6]. About 5-25% of patients will be attacked by this disease if patients continually use corticosteroids for more than 1 month. Risk increases with the quantity and duration of use. Other possible causes include scuba diving or high-pressure disease, systemic lupus erythematosus and other connective tissue diseases, autoimmune diseases, hyperlipidemia, fat embolism syndrome, and metabolic bone diseases[7]. However, about 15% of patients exhibit no obvious cause, and thus have what is termed idiopathic osteonecrosis of the femoral head. The best time to treat ONFH is at the early stage; a variety of treatments are available before collapse of an osteonecrotic femoral head. However, obvious limitations appear once the head collapses [8-11]. No method has been demonstrated to effectively stop progression of the disease before the femoral head collapses or to postpone progression of osteoarthritis after the femoral head has collapsed. In our previous study, we found that the distribution of osteoblastic and osteoclastic activities differs in the different regions of patients with late stage ONFH. In this study, we used the same method to conduct a detailed analysis of early stage osteonecrotic femoral head specimens. We validated our hypothesis by observing changes in bone microstructure and osteoblast and osteoclast activities, and explored the mechanism of femoral head collapse. We also discuss an effective method to prevent femoral head collapse.

Eight osteonecrotic femoral heads were collected from patients in the early stages of ONFH(ARCO grades II-III). The etiologies were trauma, alcohol, and hormonal. This study was performed in accordance with our approved institutional guidelines, and the protocol was reviewed and approved the by Ethical Committee of the Chinese People's Liberation Army General Hospital (No. 20150101). Informed consent was obtained from all patients.

Part I was used for non-decalcified bone tissue pathological sections. After fixing the tissue in 4% paraformaldehyde for 1 week, part I was dehydrated through a graded alcohol series for 4 weeks and immersed in xylene for 1 week. Part I was then embedded with polymethyl methacrylate under negative pressure. After solidification, the tissue was cut into 100-μm -thick slices with a hard-tissue slicing machine (Isomet 5000; BUEHLER, Dusseldorf, Germany). The slices were ground with 400-, 600-, 800-, and 1,200-grit sandpaper, polished with aluminum powder (0.05 mm), stained, and observed.

Part III was used to prepare paraffin-embedded pathological sections. After fixing the tissues in 4% paraformaldehyde for 1 week and clearing in phosphate-buffered saline (PBS), the samples were decalcified with 10% EDTA for 4 weeks, cut into 4 regions (subchondral bone, necrotic, sclerotic, and healthy regions), and dehydrated with an Automatic Tissue Dehydrator (Leica ASP200S). The samples were embedded in paraffin, cut into 5-μm-thick sections, stained with hematoxylin and eosin (HE), and observed. 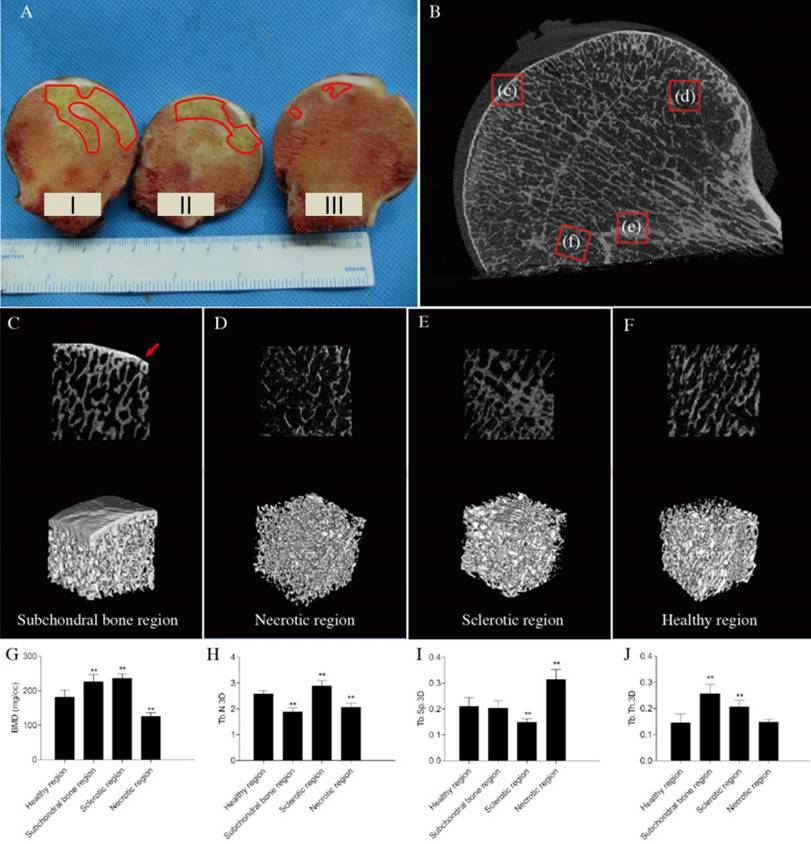 Bone tissues were cut from four different regions of part II of the femoral heads and ground into bone meal in liquid nitrogen. TRIzol was added to extract RNA from the bone meal. Primers were selected for RANK, RANKL, OPG, and BMP2 (Parkson, Beijing, China), and 1 μg RNA was added to a 20 μL volume reverse transcription system. cDNA was prepared by reverse transcription, and real-time PCR analysis was performed.

Bone tissues of different regions of the femoral head were pulverized in liquid nitrogen. Two milligrams of protein were added to RIPA lysis buffer, and the mixture was intermittently homogenized for 3 min in an ice bath. After sonication for 15 s and a 30-min incubation in the ice bath, the mixture was centrifuged at 12,000 x g for 30 min at 4°C. The supernatant was freeze-dried for 24 h and the protein precipitate diluted with 100 μL PBS containing protease inhibitors. After quantifying the protein amount and performing electrophoresis, the proteins were transferred onto polyvinylidene fluoride membranes. The membranes were probed with antibodies specific to OPG, RANK, RANKL, and BMP2 (Abcam, Cambridge, UK). Human GAPDH was used as a quantification marker. Signals were detected using secondary horseradish peroxidase-conjugated anti-mouse IgG and anti-rabbit IgG antibodies, and the membranes were immersed in enhanced chemiluminescent detection solution. The protein bands were quantified using an Epson GT-8000 laser scanner. The ratios of the protein band intensities relative to those of GAPDH were calculated for each sample.

The micro-CT images of early stage ONFH revealed that the subchondral bone region had small microfractures and that the structural continuity of the trabeculae had changed in the necrotic region(Figures 1-D). Sclerotic bands were also found (Figure 1E). However, the overall shape of the femoral head was intact, and none of the femoral heads had collapsed (Figures 1A, B).

HE staining of non-decalcified bone tissue pathological sections showed that the surface of the femoral head remained rounded and smooth, none of the femoral heads had collapsed. The subchondral bone structure remained intact. The extents of trabecular bone in necrotic regions were lower than those of sclerotic and normal regions. Obvious sclerotic bands were apparent in sclerotic regions, which had more bone trabeculae than other regions (Figure 2A). H&E staining of decalcified bone tissue sections showed that the subchondral and necrotic bone trabeculae contained many empty lacunae (Figures 2B, C). The trabecular thickness increased in the sclerotic region(Figure 2E). The trabeculae had better structural integrity and were regularly arranged in the healthy region, where normal bone cells and hematopoietic tissue were found (Figure 2D). 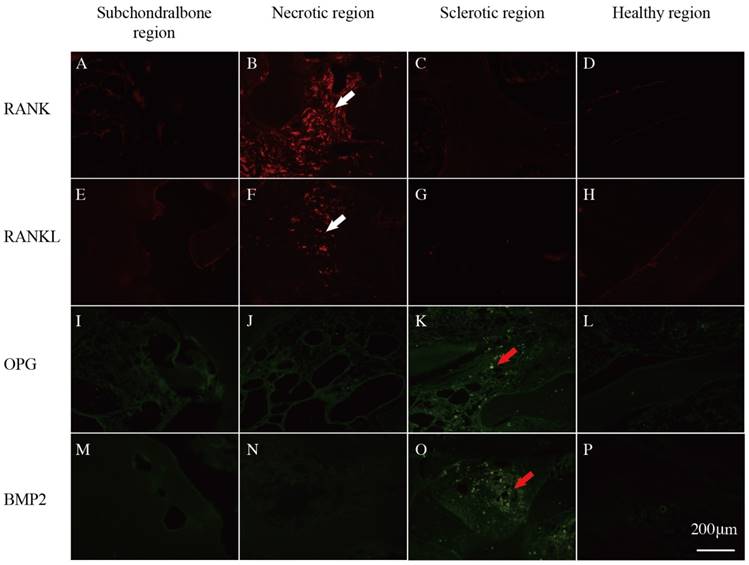 TRAP and ALP staining was performed in the different regions of the ONFH. The results showed that the TRAP-positive cells were mainly distributed in the necrotic region (Figure 4A), where the osteoclasts had a crimson appearance and exhibited a multinuclear cellular structure (Figures 4B-E). ALP-positive cells were distributed principally in the sclerotic region, arranged around the trabecular bone, where the osteoblasts were dark brown in color (Figures 4F-I). Quantitatively, the number of osteoclasts increased in the necrotic region compared with that in the healthy regions and the number of osteoblasts increased in the sclerotic region (p < 0.05; Figures 4J, K). 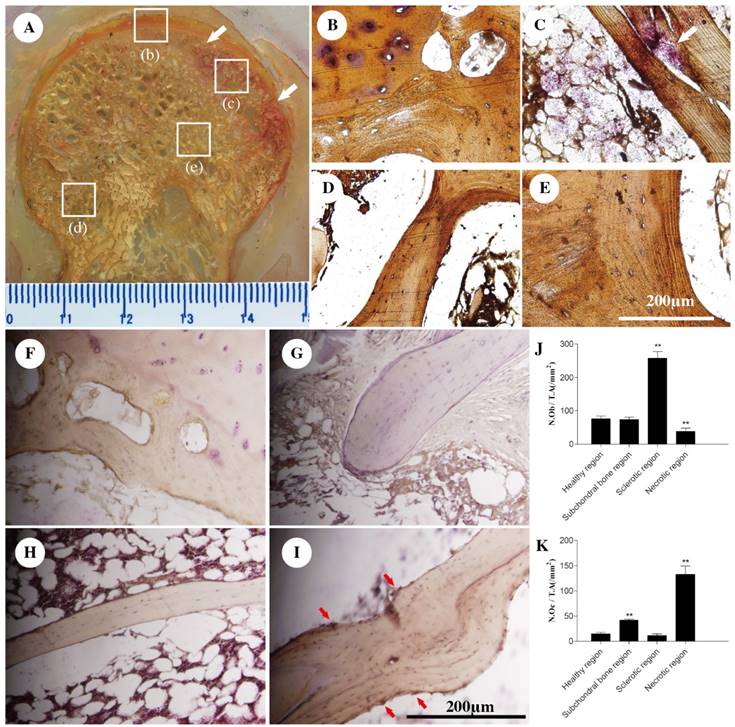 PCR and Western blot results. Relative mRNA levels of BMP2 (A), OPG (B), receptor activator of nuclear factor-κB ligand (RANKL) (C) and receptor activator of nuclear factor-κB (RANK) (D) in the subchondral bone, necrotic, sclerotic, and healthy regions. The ratio of RANKL/OPG(E). The expression levels of OPG, BMP2, RANK and RANKL in different regions of the osteonecrotic femoral head (F). 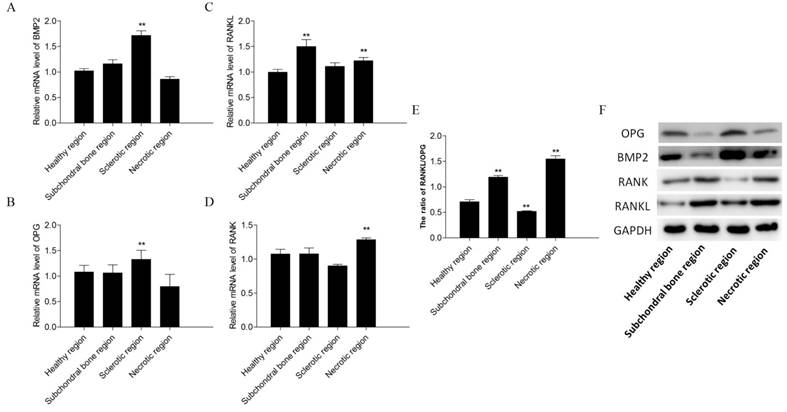 OPG, RANK, RANKL, and BMP2 protein expression levels differed significantly in the different regions of early stage ONFH (Figure 5F). OPG and BMP2 levels were higher in the sclerotic region than in the healthy region, and RANK and RANKL expression levels were higher in the necrotic and subchondral bone regions compared to those in the healthy region.

The human skeletal system maintains homeostasis and functional status through regulation of various cells, the most important of which are osteoblasts and osteoclasts. In addition, many orthopedic diseases are caused by changes in osteoblast and osteoclast functions, such as osteoporosis [12-14] and osteonecrosis[15, 16].

The OPG/RANKL/RANK signaling pathway is a very important mechanism that regulates bone metabolism [17]. OPG is a soluble RANKL decoy receptor that binds to three RANKL subtypes and blocks RANKL and RANK binding[18]. Gori et al. [19] found that developmental regulation of OPG and RANKL production contributes to the coordinated sequence of osteoclast and osteoblast differentiation during the bone remodeling cycle. In the present study, the expression of RANK and RANKL, which are bone resorption-related genes, increased per unit area in the necrotic and subchondral bone regions of early stage ONFH. In addition, OPG and BMP2 expression levels were also increased in the sclerotic region, suggesting that osteoblast and osteoclast activities change significantly during the early stage of ONFH. In addition, the RANKL/OPG ratio per unit area increased in the necrotic and subchondral bone regions. Osteoclast activity was increased significantly in the necrotic region, whereas osteogenic activity increased significantly in the sclerotic region. In the process, micro-cavities appeared during bone reconstruction in the early stage of ONFH because of bone resorption overactivity, which also resulted in changes in the mechanical properties and structure of trabecular bone in the femoral head[20]. The cause of delayed or inadequate osteoblast-mediated bone formation activity and continuous load pressure and stress were concentrated in the damaged location[21, 22]. This eventually generates a large number of microfractures when the pressure is greater than the bone trabecula can withstand. New blood vessels often can only grow into the surrounding necrotic region, and new bone tissue appears around the necrotic region and forms a sclerotic band over time, which further prevents blood vessels from growing into the center of the necrotic area[23]. Thus, this area often cannot be effectively repaired and ultimately fractures, which collapses the femoral head.

Some researchers have reported that fracture and collapse of the ONFH is caused by a repeated load acting on bone that cannot be repaired in a timely manner and multiple fatigue fractures develop in the femoral head. However, others do not believe this mechanism[24, 25]. In our previous study, we performed a series of tests and analyses on late stage ONFHs collected from patients and evaluated osteoblast and osteoclast activities in different regions of the femoral head [26]. The results showed that the bone trabecular microstructure changed significantly and that osteoblast and osteoclast activities were significantly different in different regions. Therefore, we speculated that collapse of the femoral head is strongly associated with changes in osteoblast and osteoclast activities. Osteoclast activity is stronger than osteogenic activity during repair of osteonecrosis and osteogenesis is less active than bone resorption. Due to continued load pressure, which results in repeated repair and repeated fractures, a repaired area appears between the necrotic and sclerotic regions. The emergence of a large number of fractures and cystic degeneration eventually leads to collapse of the femoral head.

We conducted a similar study here on early stage ONFH. Compared with the control group, the microstructure of the femoral head did not obviously change. The head shape remained round and only a small amount of bone absorption was evident inside the femoral head. However, the changes in osteoblast and osteoclast activities were similar to those evident at late stages of ONFH. The number of osteoclasts increased significantly per unit area in the necrotic region compared with that in the normal region, thereby leading to higher osteoclastic than osteogenic activity, which manifested as a destructive repair process. Normal bone repair mechanisms begin during osteoblast apoptosis, new blood vessels grow into the necrotic region, and sequestrum is absorbed along with the formation of new bone. Furthermore, we believe that a different repair process occurs in ONFH. Fan et al. [27] successfully established an emu ONFH collapse model, in which the extensive trabecular structure was rebuilt and the original trabecular bone was absorbed. This process is also called creeping substitution. That is to say, bone formation is slower than bone resorption during bone repair, which eventually leads to collapse of the femoral head; this has also been called “osteoclastic repair.” The same author prepared another model by injecting anhydrous alcohol into the emu femoral head, but the head did not collapse. The original trabecular structure remained intact and new bone was generated in the gap; this was called “osteoblastic repair,” which means that bone forms faster than bone is resorbed during repair. Therefore, we hope to transform “osteoclastic repair” into “osteoblastic repair” by promoting osteoblast activity while inhibiting osteoclast activity to prevent collapse of the femoral head. Future treatment of femoral head osteonecrosis requires the use of generic drugs, diphosphonate, or Nell-1 to promote osteoblast activity and inhibit osteoclast activity, combined with physical support such as that imparted by impaction grafting. Such combined therapies are appropriate for patients with early-stage osteonecrosis of the femoral head.

12. Jones DR. A potential osteoporosis target in the FAS ligand/FAS pathway of osteoblast to osteoclast signaling. Annals of translational medicine. 2015;3:189

16. Wang C, Peng J, Lu S. Summary of the various treatments for osteonecrosis of the femoral head by mechanism: A review. Experimental and therapeutic medicine. 2014;8:700-6