Kabuki syndrome is a rare genetic disorder characterized by distinct dysmorphic facial features, intellectual disability, and multiple developmental abnormalities. Despite more than 350 documented cases, the oro-dental spectrum associated with kabuki syndrome and expression of KMT2D (histone-lysine N-methyltransferase 2D) or KDM6A (lysine-specific demethylase 6A) genes in tooth development have not been well defined. Here, we report seven unrelated Thai patients with Kabuki syndrome having congenital absence of teeth, malocclusion, high-arched palate, micrognathia, and deviated tooth shape and size. Exome sequencing successfully identified that six patients were heterozygous for mutations in KMT2D, and one in KDM6A. Six were novel mutations, of which five were in KMT2D and one in KDM6A. They were truncating mutations including four frameshift deletions and two nonsense mutations. The predicted non-functional KMT2D and KDM6A proteins are expected to cause disease by haploinsufficiency. Our study expands oro-dental, medical, and mutational spectra associated with Kabuki syndrome. We also demonstrate for the first time that KMT2D and KDM6A are expressed in the dental epithelium of human tooth germs.

Kabuki syndrome or kabuki make-up syndrome (KS, MIM #147920) is a rare congenital dysmorphic syndrome that was originally described in 1981 [1, 2]. KS was initially considered to be discretely found in Japan, but later it has been recognized in other parts of the world. Estimated birth prevalence ranges from 1:32,000-86,000 [3, 4]. KS is clinically diagnosed by a peculiar face characterized by long palpebral fissures with eversion of the lateral third of the lower eyelids, arched eyebrows, long eyelashes, depressed nasal tip, and prominent ears. Patients also have postnatal growth retardation, intellectual disability, dermatoglyphic abnormalities with persisting fingerpads, and skeletal and dental anomalies.

Type 1 Kabuki syndrome (KS1, MIM #147920) is inherited in an autosomal dominant manner accounted for 55-80% of patients. KS1 is caused by mutations in KMT2D (histone-lysine N-methyltransferase 2D), also known as MLL2 (myeloid/ lymphoid or mixed-lineage leukemia 2; NM_003482.3) gene on chromosome 12q13. KS type 2 (KS2, MIM #300867), roughly found in 5% of patients, has been linked to mutations in the KDM6A (lysine(K)-specific demethylase 6A, NM_021140.3) located on chromosome Xp11.3 [5]. The underlying genetic mutations remain unknown in approximately 25% of patients [6]. Although the etiologic roles of KMT2D and KDM6A have been proposed in the function of several organs, evidence that these genes are involved in tooth development is very limited.

We previously reported clinical features but not detailed dental features with no molecular studies of Thai patients with KS [12]. Here, we characterize oro-dental manifestations and physical features of patients with novel KMT2D and KDM6A mutations. The mutations were identified by Whole Exome Sequencing (WES) and confirmed by Sanger sequencing. In addition, the expression of KMT2D and KDM6A during tooth development was demonstrated by in situ hybridization using human embryo sections.

Participants in this study were from seven unrelated Thai families. Written informed consents were obtained from all participants. The study protocol was approved by the Human Ethical Review Board at the Faculty of Dentistry, Chulalongkorn University, Thailand. Physical and dental examinations were performed. Oro-dental characteristics were verified by panoramic radiographs.

The most likely pathogenic variants were confirmed by PCR and Sanger sequencing. DNA of the parents was also Sanger sequenced to determine the presence of the mutations. Primers were designed for exons 7, 11, 22, 29, 39, and 51 of the KMT2D gene and exon 3 of the KDM6A gene (Table S1).

Embryos were collected at different stages of gestation (approximately 8-12 weeks post-fertilization) from the Human Developmental Biology Resource Birth Defects Research Centre at the Institute of Child Health, University College London. Embryos were stored in phosphate buffered saline and delivered immediately following retrieval by courier. The ethical approval is held by Institute of Child Health (UCL) and King's College London has a subscription to obtain samples from this centre. Embryos were fixed in 4% paraformaldehyde (PFA) at 4°C and 10% EDTA (pH 7.4) was used to decalcify for 7.5-12 weeks (depending on the stage) at 4°C. They were embedded in paraffin wax after being dehydrated in a graded ethanol series, sectioned at 8 μm and mounted on slides.

Digoxigenin (DIG) - labeled in situ hybridization was performed as previously described [14]. The tooth sections were derived from two different samples at each developmental stage. Human cDNA clones for KDM6A (IMAGE ID, 1032414), KMT2D (IMAGE ID, 111472) were ordered from Source Bioscience. Images of the sections were photographed using a Zeiss microscope.

We identified seven unrelated Thai patients with a clinical diagnosis of KS. Five were female and two were male. The age of patients ranged from 2-15 years. They presented with typical facial dysmorphism, including long palpebral fissures with eversion of the lower lateral lids, arched eyebrows with the lateral one-third dispersed or sparse, depressed nasal tips, and prominent ears. Post-natal proportionate short stature, mild to moderate degree of intellectual disability, prominent finger fat pads, and fifth finger clinodactyly were common findings in our patients (Figure 1 and Table 1). Muscular hypotonia was common and appeared to be the most prominent in the neonatal period and to improve overtime. Most patients manifested feeding difficulties, delayed speech, and psychomotor development. 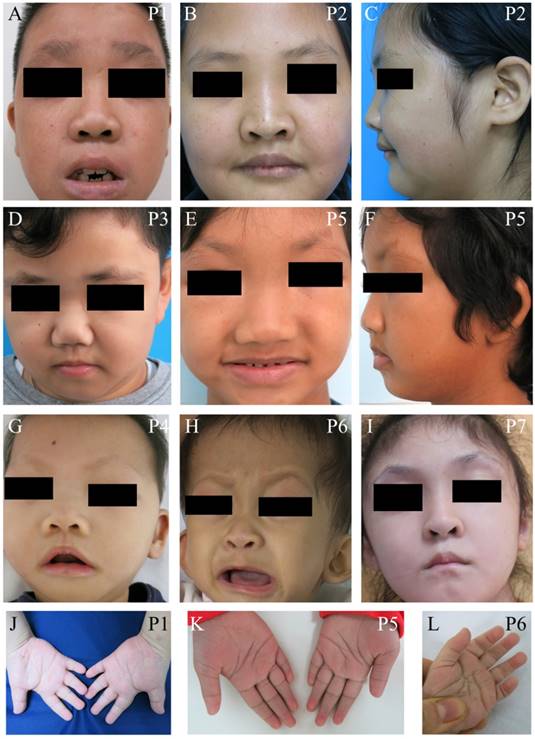 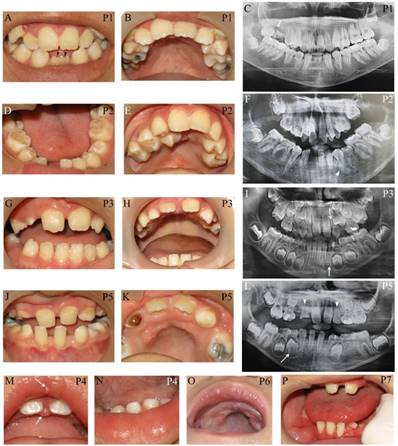 Expression of the KMT2D and KDM6A Genes

Clinical, radiographic, and laboratory manifestations observed in the study 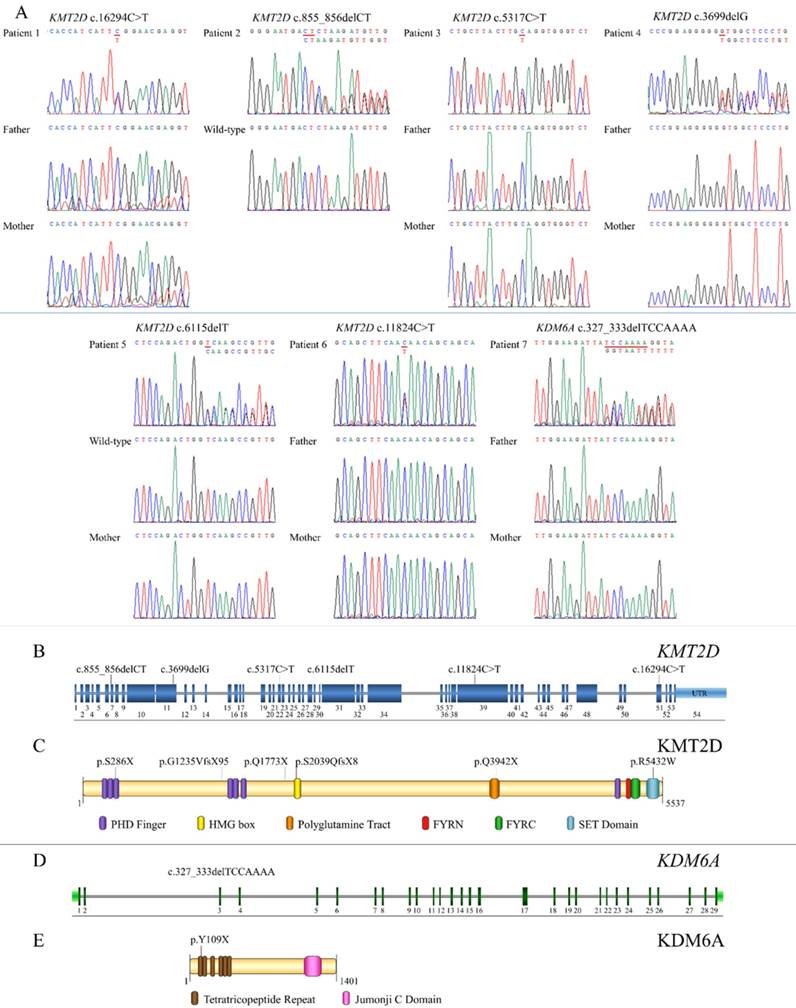 Summary of mutations in the KMT2D and KDM6A genes identified in the study. 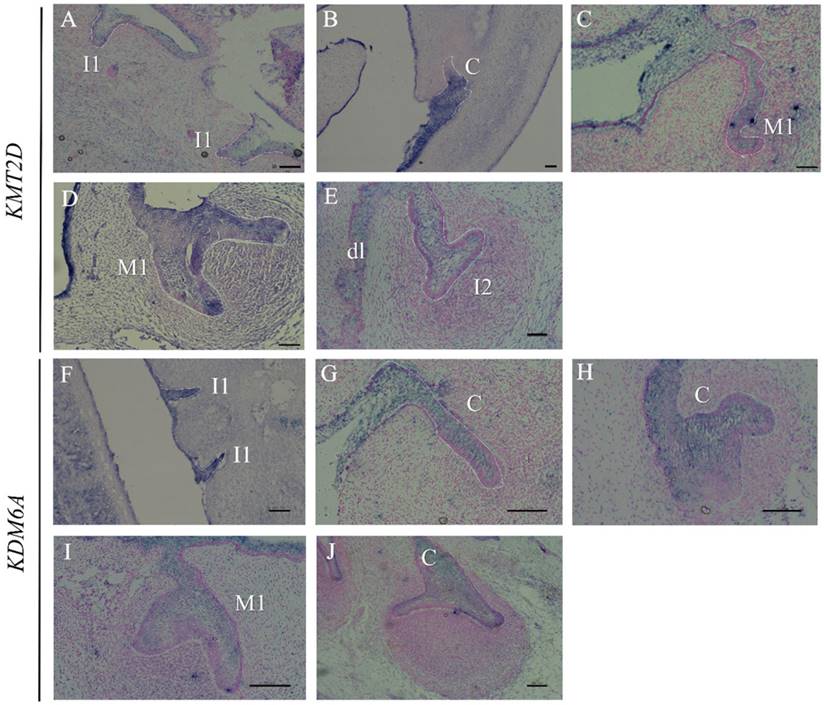 We are the first study revealing comprehensive data of oro-dental anomalies incorporated with medical features and genetic mutations in Thai patients with KS, and the expression of KS-causing genes, KMT2D and KDM6A, in human tooth germs. Congenitally missing teeth, micrognathia, malocclusion, and high-arched palate were consistent oro-dental phenotypes found in our KS patients. The number of tooth agenesis ranged from two to eleven permanent teeth. The most commonly missing teeth, excluding the third molars, were lateral incisors and second premolars. The absence of canine teeth which is the least common missing teeth was observed in our KS patient.

With WES, we successfully identified etiologic mutations in all KS patients including six KMT2D and one KDM6A heterozygous mutations. The high detection rate of mutations (100%) was expected due to our strict criteria for clinical diagnosis of KS. Five out of six mutations in KMT2D were novel. Three were heterozygous frameshift deletions and two were nonsense mutations in the KMT2D gene. One was a known missense mutation in the KMT2D gene located within a SET highly conserved functional domain of the KMT2D (Figure 3B and C) [15, 16]. This mutation was recently shown to disrupt the Kabuki interaction interface (KIS) required for a formation of a second active site within SET1 family core complexes [16, 17]. KMT2D mutations observed in our group of patients showed no significant gathering in any specific exon or a mutational hot spot. One patient was heterozygous for a novel de novo frameshift deletion in the KDM6A gene (Figure 3D) located in tetratricopeptide repeat which was required as an interaction module and multiprotein complex mediator (Figure 3E) [18]. The mutation represented an X-linked dominant inheritance. Since all six novel mutations, four frameshift deletions and two nonsense mutations, were truncating mutations, they are likely to be subject to nonsense mediated mRNA decay (NMD) and expected to be loss-of-function mutations. Taken together with the fact that previous loss-of-function mutations causing KS were leading to haploinsufficiency [19-23], we speculate that the six novel mutations found in our patients cause KS by haploinsufficiency.

KMT2D and KDM6A have been shown to directly interact and function as parts of the activating signal cointegrator-2-containing complex involving in epigenetic control of transcriptionally active chromatin [24]. Interaction between both proteins is involved in the transcription of a wide range of downstream genes including retinoic acid receptor, p53, WNT/β-catenin, and HOX genes which are important for craniofacial development [25-27]. Human dentition has the characteristics of a complex adaptive system showing phenotypic and genetic heterogeneity influenced by epigenetic regulation [28]. One of the consistent dental feature of KS patients is congenital absence of teeth. We detected the expression of KMT2D and KDM6A in dental epithelium at early stages of human tooth development suggesting their roles in odontogenesis. The mutations of genes exclusively expressed in embryonic dental epithelium have been shown to cause tooth agenesis [29-31]. The majority of our mutations observed were truncating mutations [19-23]. These suggest that the deviated expression of KMT2D and KDM6A could disturb their roles, genes and signaling in dental epithelium, and/or epigenetic influence, causing a disruption of human tooth formation.

In summary, our identification of six novel truncating mutations in the KMT2D and KDM6A genes expands mutation spectra of the KMT2D and KDM6A genes associated with KS. Our study shows that WES is a promising method to identify both KMT2D and KDM6A mutations in KS patients. Congenital absence of teeth, high-arched palate, and micrognathia could be considered as one of the diagnostic features of KS. Abnormal tooth shape and size such as pitted incisors and truncated tooth roots add the range of dental features to the KS clinical phenotype. These incorporated with medical conditions would enable health care practitioners to provide an improved health care for KS patients. Our study also reveals for the first time that KMT2D and KDM6A are expressed in the dental epithelium of human tooth germs confirming their roles in tooth development. These pave a crucial way and highlight a requirement for further investigation of KMT2D and KDM6A in the development oro-dental structures.