Smad ubiquitin regulatory factor 2 (Smurf2) is a HECT domain-containing E3 ubiquitin ligase. Together with its closely related homolog Smurf1, Smurf2 was initially recognized as a negative regulator of transforming growth factor-β (TGF-β) and bone morphogenetic protein (BMP) signaling, but subsequent studies have expanded its function to regulate many different signaling pathways and play important roles in genomic stability, cell polarity, tissue homeostasis and carcinogenesis. Mice with conventional knockout of Smurf1 or Smurf2 alleles are viable, but conventional Smurf1 and Smurf2 double knockout mice were early embryonic lethal. In order to study the physiological function of Smurfs during late stage of embryonic development or in adult animals, we generated Smurf2flox/flox mice carrying a targeted mutation for conditional Smurf2 gene inactivation. We demonstrated that Cre-mediated recombination using Alb-Cre, a Cre line expressed in hepatocyte, results in specific deletion of the gene in liver tissue. We also showed that Cre-mediated recombination in mouse embryonic fibroblasts (MEFs) with Smurf2flox/flox genotype resulted in generation of Smurf2 knockout MEFs, and Smurf2 deficiency affects multiple signaling pathways. Therefore, this animal model will be useful to study the distinct roles of Smurf2 in different tissues at different ages.

Ubiquitination is a major form of post-translational modification that regulates essentially all aspects of cellular functions [1]. Conjugation of ubiquitin to a protein is carried out by sequential actions of three enzymes: an ubiquitin activating enzyme (E1), an ubiquitin conjugase (E2), and an ubiquitin ligase (E3). Because of diverse functions and physical contact with substrates, E3 ubiquitin ligases are of the most importance. Smurf1 and Smurf2 are two closely related members of the HECT family of ubiquitin E3 ligases, sharing a high degree of amino acid sequence homology and distinctive structural features of the HECT family of E3 ubiquitin ligases. These features include an amino-terminal phospholipid/calcium-binding C2 domain, two to four copies of WW repeats that mediate protein-protein interactions by binding to a PPXY (PY) motif in target proteins, and a carboxyl-terminal HECT domain that catalyzes the ubiquitination reaction [2]. Smurfs were initially recognized as a negative regulator of TGF-β/BMP signaling through interacting with PY motifs in most R-Smads and inhibitor Smads, thereby ubiquitinating Smads, or TGF-β/BMP or targeting other downstream components of the pathway [3-7]. Subsequent biochemical studies broadened the repertoire of Smurf substrates to include Axin, Ezh2, ID1/ID3, KLF5, MEKK1, Ptch1, Prickle1, RhoA, RNF20, Runx2/3, Talin, Traf4, etc., and extended their function to controlling cell polarity, differentiation, genomic stability and tumorigenesis [8-11].

To investigate the functions of Smurfs in vivo under physiological settings, mouse models with genetic modification of Smurf1 and Smurf2 have been generated [9, 12, 13]. In these conventional knock-out mice, Smurf1 or Smurf2 is disrupted in all cells, which prevents the effort for further studying of the role of Smurfs in specific types of cells and their corresponding cellular and molecular mechanisms. Furthermore, although mice that lack either Smurf1 or Smurf2 are viable, loss of both Smurfs leads to early embryonic lethality [9, 12, 13], which prevents us from studying the role of Smurfs in later embryonic development and diseases in adult stages such as aging related diseases. To overcome these disadvantages, we have generated a Smurf2 conditional null allele, the Smurf2flox allele, using the Cre/LoxP system.

Generation of the Smurf2floxneo targeting construct

The targeting vector was constructed using Smurf2 genomic DNA isolated previously [12] and ploxPneo vector that contains a PGKneo cassette with two loxps at its both ends [14]. Briefly, a loxp site was first inserted into Smurf2 genomic DNA before the exon9, then a 7.96-kb Xba I fragment including exon 8-10 and flanking introns was inserted into the ploxPneo vector to generate the 5' homology recombination arm. The 3' homology recombination arm in the targeting vector was generated by inserting the 3.92-kb Xba I-BamH I fragment including exon 11 and flanking introns. The finished targeting construct, pLoxP-Smurf2floxneo, is shown in Figure 1A. 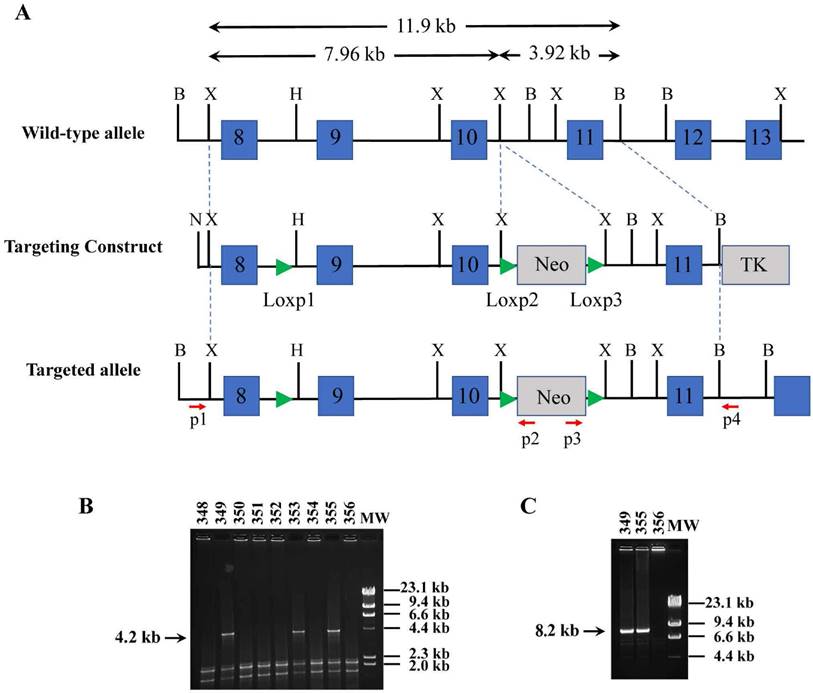 Transfection of ES cells and generation of germline chimeras

TC1 embryonic stem (ES) cells [15] were transfected with NotI-digested pLoxP-Smurf2floxneo by electroporation and selected using G418 and -(2-deoxy-2-fluoro-β-D-avabinofuranosyl-S-iodouracil (FIAU). G418- and FIAU- double resistant ES clones were screened for homologous recombination events within the Smurf2 locus by PCR. The 5' recombination was identified by PCR using the primer p1:( 5'- GCTTAGTGACCAAGTAGCAC -3') and p2:( 5'- CCAGACTGCCTTGGGAAAAGC-3'), which generated an 8.2-kb product. The 3' recombination was identified by PCR using the primer p3: (5'- CAGCTCATTCCTCCCACTC ATG -3') and p4: (5'- TCCTTTGCCTCCCAAGACTG -3'), which generated a 4.2-kb product. The targeted sites and integration of three Loxp sites were also confirmed by sequencing the above PCR products. Recombinant ES cells heterozygous for the targeted mutation were microinjected into blastocysts from C57/B6 mice to obtain germ-line transmission following standard procedures. The F1 agouti offspring were generated from breeding chimeric male with C57BL/6 female, and the presence of the Smurf2floxneo allele were analyzed by PCR. All mice were maintained and handled according to protocols approved by the Animal Care and Use Committee of the National Cancer Institute and National Institute of Diabetes, Digestive and Kidney Diseases, NIH.

Establish a conditional allele for Smurf2 and genotype analysis 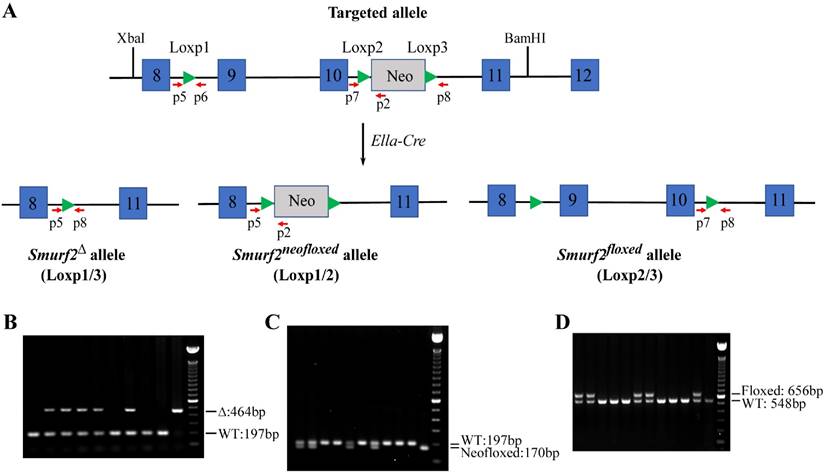 Embryonic fibroblasts were generated by standard techniques. Briefly, E14.5 embryos were dissected individually, all inner organs, head, limb and tail removed and remaining tissues minced by cutting. After incubation in 2.5 ml trypsin at 37°C for 5-10 minutes, cells were resuspended and plated on 10 cm plates in DMEM supplemented with 10% FBS. After three passages, homogenous fibroblast cells were apparent and used for experiments.

Recombinant adenoviruses, Ad-GFP and Ad-Cre were obtained from Vector BioLabs (Malvern, PA). Infection of MEFs was conducted in 6-well plates in DMEM supplemented with 5% FBS at a multiplicity of infection (MOI) of 100. After 24 hours of infection, cells were recovered in the regular culture medium for additional 24 hours. Cells were then treated with TGF-β (4 ng/ml) or BMP2 (100 ng/ml), BMP4 (50 ng/ml) for 1 hour after being starved for 2 hours in DMEM containing 0.2% FBS.

TGF-β (CAGA12-Luc), BMP4 (BRE-Luc), Sonic hedgehog (Shh) (8XGli-Luc) and Wnt-3a (TOPflash) reporter assays were carried out in MEFs. After transfected with the firefly luciferase reporters and the Renilla luciferase control reporter and incubated for 24 hours, Smurf2flox/flox or Smurf1-/-;Smurf2flox/flox MEFs were infected with either control adenovirus expressing LacZ or adenovirus expressing Cre for 2 days, and treated with different ligands for 16 hours. The signal of firefly luciferase was normalized to that of Renilla luciferase. The fold activation was calculated with dividing the relative luciferase unit (RLU) of the treated group by that of the untreated group. Results are shown as relative fold change ± S.D. (error bars) (n = 3 or 4).

To construct the Smurf2floxneo allele, we have made a targeting vector that contains three Loxp sites, the first two Loxp sites flanking the entire exons 9 and 10 (Figure 1A). In this way, existence of Cre recombinase would lead to deletion of exons 9 and 10, and create a premature stop codon that terminates protein translation prior to the last two highly conserved WW domains and the HECT ubiquitin ligase domain. This targeting strategy is the same as the conventional Smurf2 knockout mice that we generated previously, in which the expression of the truncated peptide is very low and does not have a dominant function [12]. The neo cassette was flanked by the last two Loxp sites, which enable us to remove the neo cassette by Cre recombinase as well. After transfecting the Not I-linearized targeting vector pLoxP-Smurf2floxneo into TC1 ES cells, four targeted ES clones were detected by PCR (Figure 1B and 1C) and confirmed by sequencing. Two positive ES clones were microinjected into blastocysts harvested from C57/BL6 mice to generate male chimeric mice, which were bred with female C57BL/6 mice to produce F1 agouti offsprings carrying one copy of the targeted Smurf2floxneo allele.

To test whether neo gene and exons 9-10 in Smurf2floxneo allele can be deleted by the Cre recombinase and to generate a neo-less conditional knockout allele, heterozygous (Smurf2floxneo/+) mice were crossed with EIIa-Cre transgenic mice that express Cre recombinase in germline [17]. The offspring were identified by PCR with primers shown in Figure 2A. As expected, we found that this crossing breeding generated three types of alleles due to Cre-mediated recombination among three Loxp sites. A 464 bp fragment was amplified from Smurf2Δ allele with deletion of neo gene and exons 9-10 between Loxp1 and Loxp3 (Figure 2B). Smurf2neofloxed allele with deletion of exons 9-10 was detected by producing an amplified 170 bp fragment (Figure 2C). The PCR-amplified 656 bp fragment indicated the excision of the neo gene, which produced Smurf2flox allele (conditional knockout allele) in Smurf2flox/+ heterozygous mice (Figure 2D).

To verify gene inactivation in tissue specific manner in mice, we generated homozygous Smurf2flox/flox mice, then crossed them with mice that carry an Alb-Cre transgene [18] to assess the activity of Smurf2 conditional knockout allele in liver tissues (Figure 3A). Western blot analysis indicated that the Cre-mediated deletion occurs only in liver tissue, but not in other tissues where the Alb-Cre transgene is not expressed, such as the kidney, spleen, heart and muscle (Figure 3A). These data indicate that the Smurf2flox allele can be recombined to delete exons 9-10 in a tissue-specific fashion, thus the Smurf2 conditional mouse model should be very useful for studying Smurf2 functions during later stages of embryonic development. Like the Smurf2 knockout mice [19], histological analysis of H&E stained liver sections also did not reveal any apparent phenotype up to 12 months of age (data not shown). In addition, the liver function and lipid metabolism in these hepatocyte-specific Smurf2 knockout mice, (Alb-Cre;Smurf2flox/flox or LKO), were normal (Figure 3B). 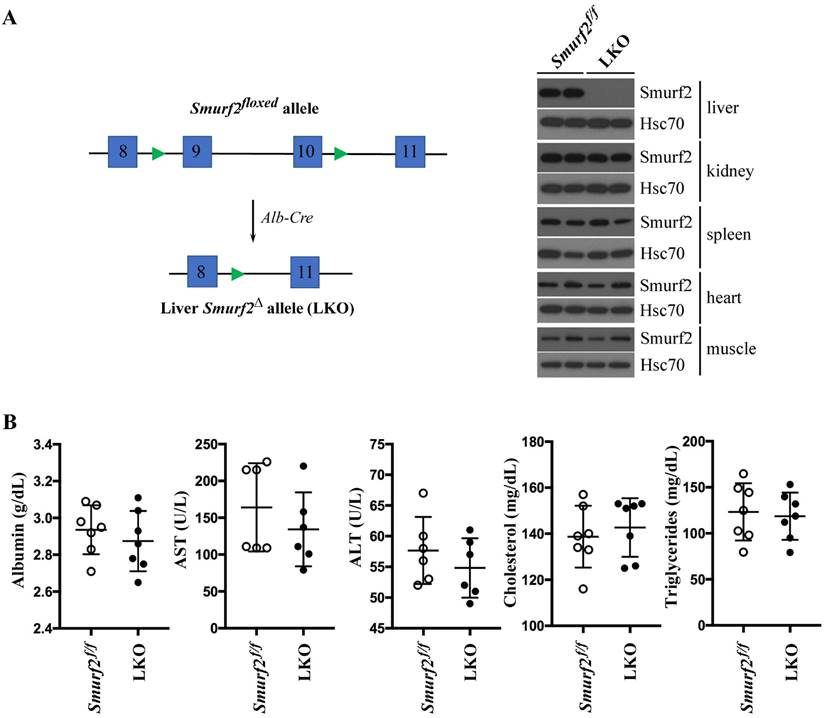 We also isolated MEFs from Smurf2flox/flox embryos. After infection of these MEFs with a control adenovirus expressing GFP (Ad-GFP) or adenovirus expressing Cre recombinase (Ad-Cre), we obtained the control wild type MEFs regarding to Smurf2 expression, Ad-GFP;Smurf2flox/flox, and MEFs with Smurf2 deficiency, Ad-Cre;Smurf2flox/flox (Figure 4A). We treated these cells with TGF-β, BMP2 or BMP4, and did not observe any significant difference in Smad protein level or p-Smad levels among these cells (Figure 4A and 4B). However, when subjected to reporter assays, we found that TGF-β-dependent (CAGA)12-Luc activity were much higher in Smurf2 deficiency MEFs (Figure 4C). These results were consistent with previous reports that Smurf2 does not directly target TGF-β family of receptors or Smads for polyubiquitination and degradation, instead it regulates the sensitivity of the TGF-β family signaling via monoubiquitination that disrupts formation of Smad complex [12, 20]. Smurfs were also reported to regulate many different pathways other than TGF-β and BMPs. For example, in sonic hedgehog (Shh) pathways, Smurfs promote Ptch1 to undergo polyubiquitination and degradation, thereby, activate Gli1-mediated transcription [10]; while in canonical Wnt signaling, Smurf1 and Smurf2 were shown to mediate ubiquitination of Axin, a negative regulator of Wnt/β-catenin signaling [21, 22]. We found that Smurf2 deficiency severely inhibited Shh-mediated Gli1-dependent 8xGli1-Luc activity and Wnt3-mediated β-catenin/Tcf reporter TOPFLASH activity (Figure 4D). 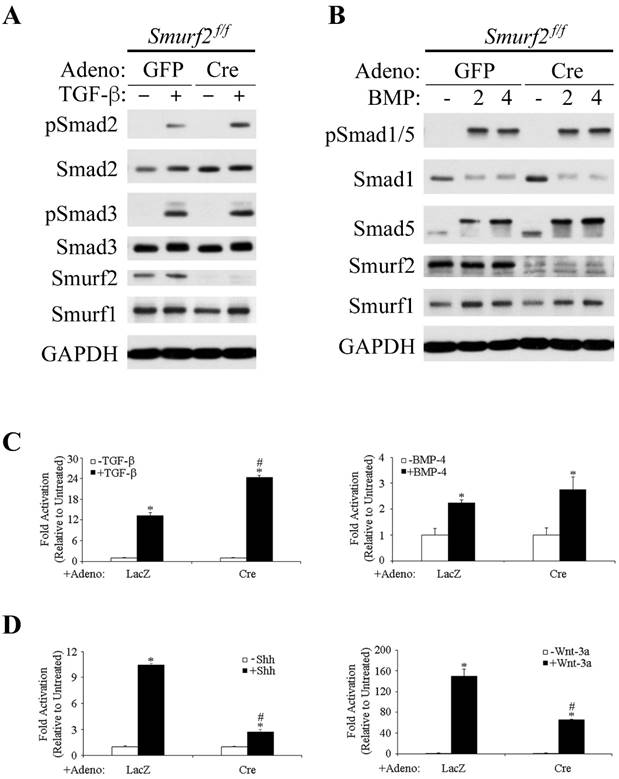