Background & aims: VEGFR-3 has been shown of great significance in lymph node metastasis and some malignancies, however, its expression in tumors and impact on outcome of intrahepatic cholangiocarcinoma (iCCA) remains unknown. The aim of this study was to assess the role of VEGFR-3 positive tumors for prognosis of iCCA and tumor-associated lymphangiogenesis.

Methods: Clinicopathological features, prognostic factors and survival rate were analyzed to evaluate the influence of VEGFR-3 positive expression on prognosis of iCCA. In addition, tumor-associated lymphangiogenesis quantified as micro-lymphatic vessel density (MLVD) was assessed to explore the correlation between VEGFR-3 expression and lymph node metastasis for iCCA.

Intrahepatic cholangiocarcinoma (iCCA), the second most common primary liver cancer after hepatocellular carcinoma, has been shown a drastic increase in the incidence and mortality [1, 2]. It is a highly malignant tumor with poor prognosis due to rapid progression, lymph node metastasis and frequent recurrence of the tumor. Surgical resection of iCCA provides the potential curative treatment that prolongs survival outcomes; however, most patients present with unresectable iCCA at the time of diagnosis due to lack of early clinical manifestation and advanced cancer cells or metastasis [3, 4]. Moreover, the efficacy of chemotherapy or radiotherapy to provide better survival outcomes is not confirmed [5, 6]. Therefore, in consideration of increasing number of patients and limited therapeutic strategies, novel molecular markers of iCCA are required for prognosis prediction and therapeutic target.

From Jan 2007 to Jul 2015 in our institution, a total of 106 consecutive patients who underwent hepatic resection with curative intent for iCCA were enrolled in the study. The included patients met the criteria as follows, (1) patients with pathological confirmation of iCCA from liver specimens, (2) patients who received no preoperative adjuvant chemotherapy or radiation therapy, (3) patients without distant metastasis. The present study was approved by the local ethics committee of Renji Hospital, School of Medicine, Shanghai Jiao Tong University.

All patients were followed up in the outpatient at regular intervals, and those who were with unavailable data were visited by telephone inquiries or dropping-in follow-up. The primary endpoint of this study was death of patients, and the second endpoint was recurrence of the tumor. Data of last follow-up investigation and recurrence of the tumor were collected for all patients.

4-micrometer thick formalin-fixed, paraffin-embedded sections were cut and deparaffinized through xylene and ethanol. Methanol containing 0.3% hydrogen peroxidase was used to block the endogenous peroxidase activity. After antigen retrieval and washing in phosphate-buffered saline, tissue sections were incubated overnight at 4℃ with the monoclonal antibodies against VEGFR-3 (rabbit monoclonal, 1:200; Abcam) and podoplanin (rabbit monoclonal, 1:200; Abcam). On the second day, the sections were then incubated with the appropriate biotinylated secondary antibodies and the immune complex was then visualized using 3,3'-diaminobenzidine.

To analyze VEGFR-3 expression in cancer cells, percentage of immunostained cancer cells and staining intensity were assessed semi-quantitatively. For each section, three fields were randomly selected and staining in the cytoplasm was considered positively immunostained. The tissue sections were scored based on the percentage of immunostained cancer cells as: <10 %=0, 10-50 %=1, >50 %=2. Sections were also scored on basis of staining intensity as negative=0, moderate =1, or strong =2. A final score was obtained by multiplying the intensity and percentage scores. Expression of VEGFR-3 in cancer cells was categorized as either positive (≥2) or negative (<2) using a cut-off score of 2. All sections were evaluated independently by two investigators, who were blinded for the histopathological characteristics of the tumors and the patients.

To analyze tumor-associated lymphangiogenesis, micro-lymphatic vessel density (MLVD) was determined in the tumor sections by quantitative analysis of podoplanin-positive vessels. The most vascularized areas within tumor (hot spot) were identified at low magnification (× 40) and were manually counted at a representative high magnification (× 400). The lymphatic vessels were counted in three fields and were recorded as total number per unit area. Endothelial staining in large vessels and non-endothelial structures were disregarded in lymphatic vessel counts.

The correlation between VEGFR-3 category and the clinicopathologic factors were evaluated using the chi-square test. Survival curves were estimated using the Kaplan-Meier method, and difference was analyzed using the log-rank test. Kolmogorov-Smirnov- and Shapiro-Wilk-test were used to test MLVD values for normal distribution. Non-parametric data were compared using the Mann-Whitney-U-test. MLVD was analyzed by median cut-off and box-scatter plot graphics display a statistical summary of the median, quartiles and ranges. To evaluate independent prognostic factors associated with survival, the Cox regression hazard model was used to perform univariate and multivariate analysis. All statistical analysis was performed using software (SPSS, version 19.0). Statistical significance was defined as p < 0.05 (* p < 0.05; ** p < 0.01; *** p < 0.001).

The clinicopathological characteristics of the 106 patients were described in Supp. Table 1. All patients had undergone hepatic resection and none received preoperative adjuvant chemotherapy or radiation therapy. Carbohydrate antigen 19-9 (CA19-9), one of the tumor markers for iCCA, was above the normal level in majority of patients (n=73, 68.9%). During the operation, presence of vascular invasion, lymph node metastasis and perineural sheath infiltration, which represented tumor progression, were found in 28, 48, 14 patients, respectively. In addition, 61 patients (57.5%) presented with largest tumor diameter over than 50mm and 17 patients (16%) were with multiple tumor nodes. The median follow-up of total patients was 22.1 months (range, 1-118 months). Tumor recurrence occurred in 72 patients by the end of follow-up.

Expression of VEGFR-3 in iCCA

VEGFR-3 expression was detected within the tumors exhibiting in the cytoplasm of cancer cells in 106 iCCA samples. The staining intensity of VEGFR-3 varied between individuals with iCCA (Fig. 1A, B, C, D, E, F), thus, in order to analyze the impact of VEGFR-3 expression on outcomes and prognosis, patients were divided into two groups according to quantitative analysis by multiplying the intensity and percentage scores. Of 106 patients enrolled in the study, 77 displayed VEGFR-3 expression score ≥2 and were assigned to the “positive” group, while the other 29 patients were allocated to the “negative” group (Fig. 1G).

Correlation between VEGFR-3 expression and clinicopathogical features in iCCA

Analysis of prognostic factors in patients with iCCA

Different expression of VEGFR-3 in intrahepatic cholangiocarcinoma (iCCA). (A) Representative iCCA tissue characterized by a glandular architectural pattern (hematein-eosin-saffron staining). (B) Negative, (C) Weak, (D) Moderate and (E) Strong immunostaining intensity for VEGFR-3 in cancer cells of iCCA tissue. Strong staining intensity for VEGFR-3 in the cytoplasm of cancer cells was regarded as positive controls. (F) Staining for VEGFR-3 was negative in all para-carcinoma tissues and was regarded as negative controls. (G) Of total 106 patients enrolled in the study, 77 patients (72.6%) with iCCA showed positive expression of VEGFR-3 in tumors, while 29 patients (27.4%) presented with negative expression. (scale bar: 200μm) 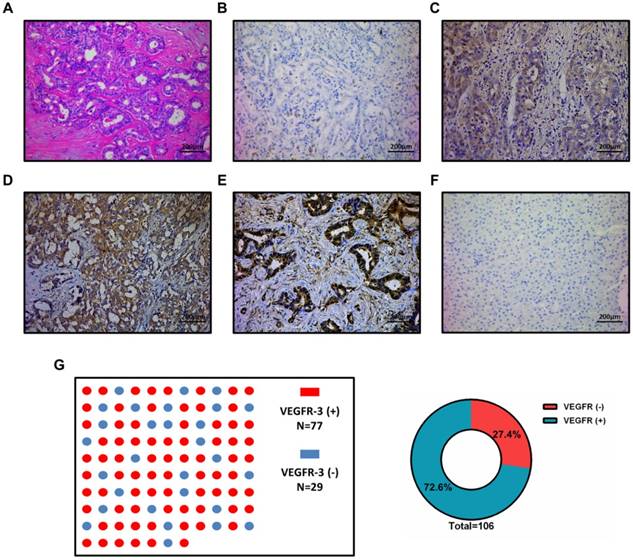 Impact of VEGFR-3 expression on survival in iCCA 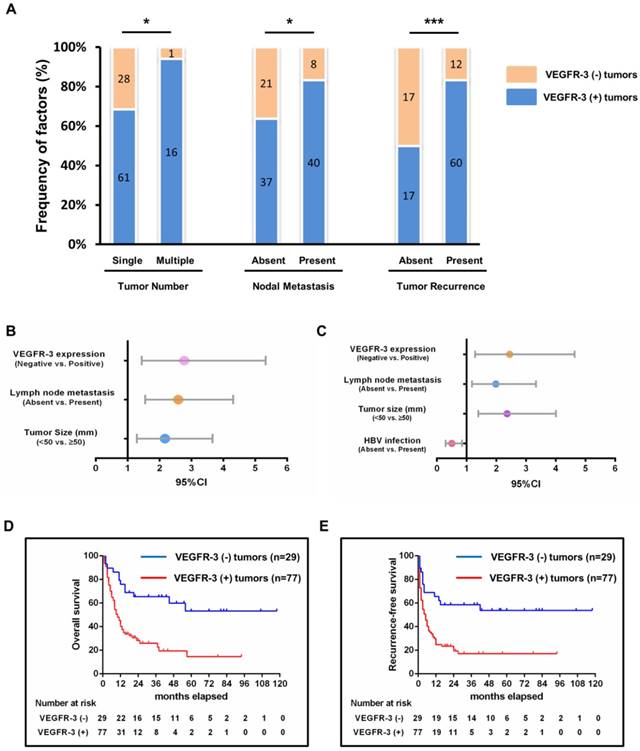 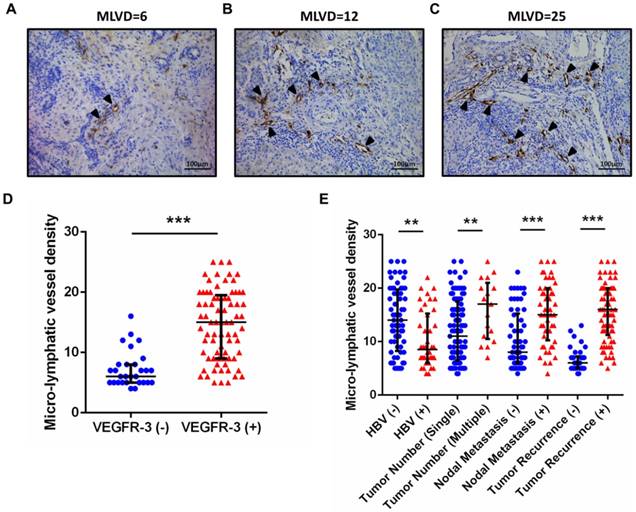 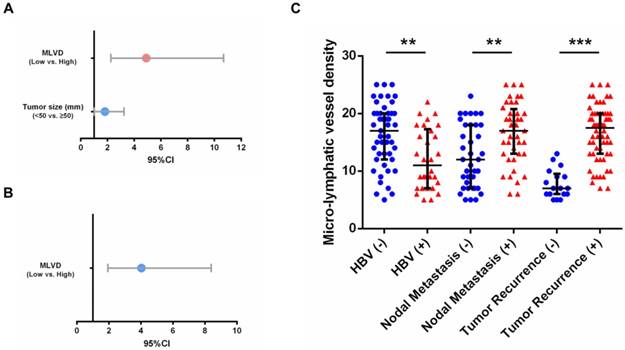 Intrahepatic cholangiocarcinoma is considered to be a highly aggressive carcinoma with poor prognosis due to early invasion, lymph node metastasis, rapid progression of tumor and frequent recurrence after surgical operation [2, 5, 15]. The lack of appropriate medical approaches calls for identifying effective prognostic biomarkers which influence the progression and metastasis of iCCA. VEGFR-3, a tyrosine kinase receptor for VEGF-C/VEGF-D, is considered to be a major driver of embryonic vascular development. In tumor entities, over-expression of VEGFR-3 was reported to stimulate lymph node metastasis and promote proliferation, mobility and invasion of cancer cells as well [16, 17]. However, expression of VEGFR-3 and its clinicopathological and prognostic significance in iCCA is far from known.

In this study, 77 of 106 patients had VEGFR-3 positive expression in tumor cells, providing a positive rate of 72.6%. VEGFR-3 positive expression was significantly associated with tumor number, lymph node metastasis and tumor recurrence. In addition, patients with positive VEGFR-3 tumors demonstrated significantly worse overall and recurrence-free survival and VEGFR-3 expression was established as an independent predictor of survival in patients with iCCA after resection. However, it is noteworthy that neither intensity nor percentage of VEGFR-3 staining was prognostic factors for survivals, which provided proof that VEGFR-3 expression assessed by combination of intensity and percentage was a superior prognostic factor. The results are partly consistent with previously published studies in prostate [18] and non-small-cell lung cancer [13, 19]. It is therefore important to determine the significant role of VEGFR-3 positive expression in iCCA.

However, it is important to note that VEGFR-3 expression showed no correlation with clinical parameters involved in local tumor growth including tumor size, histological differentiation, vascular invasion and tumor distribution. The different influence of VEGFR-3 mainly arises from the unique biological characteristics of iCCA. iCCA, a solid tumor lack of blood supply, is characterized by lymph node metastasis [1, 2, 5]. VEGFR-3 has been confirmed to promote lymph node metastasis in experimental models [16], while clinical parameters including tumor size, bilobar distribution and vascular invasion are more likely to be influenced by tumor-associated angiogenesis in hepatobiliary tumors [20, 21, 22]. It may thus explain that in iCCA entities, VEGFR-3-induced lymph node metastasis facilitates tumor recurrence and poor prognosis instead of local tumor growth affected by angiogenesis.

Recently, various inhibitors that target the VEGFR-3-VEGFC/VEGFD axis have been developed that might be useful in clinic. The neutralizing antibodies that target VEGFR-3 have progressed to Phase I clinical trials in patients with advanced solid tumors in 2013 [32]. Several small molecule protein kinase inhibitors (PKIs) such as sorafenib [33], pazopanib [34] and sunitinib [35, 36] have been developed that target various kinases, including VEGFR-3. However, none of these has been studied in patients with iCCA. Based on our results, iCCA is a highly malignant tumor with limited therapeutic approaches except hepatic resection. Since VEGFR-3 positive expression in tumors could serve as a negative prognostic marker for iCCA, hepatic resected patients with VEGFR-3 positive tumors are suggested to be then offered an anti-VEGFR-3 strategy to reduce the incidence of recurrence. In addition, iCCA might seed lymph node metastasis from an early stage or a small size. As VEGFR-3 expression was found to facilitate lymph node metastasis through lymphangiogenesis in our study, pre-operative anti-VEGFR-3 drugs could also be used in theory for treatment of patients with advanced cancers. More animal-based studies and clinical trials are required to identify the efficacy of anti-VEGFR-3 strategy for iCCA in future.

This study provides a great deal of information about the pivotal role of VEGFR-3 positive tumors in hepatic resected patients with iCCA. However, there are a few underlying limitations that remain to be confirmed. Firstly, the limited number of patients needs additional multicenter large-size studies to confirm the results. Secondly, all patients were based on Chinese population, so the results need to be further validated by patients from other regions. In addition, patients enrolled in this study were locally restricted malignancies in the liver. More detailed results should be analyzed on patients present with advanced or metastatic tumors. Despite the above limitations, our study is the first to represent VEGFR-3 positive tumors is related to poor prognosis of iCCA through tumor-associated lymphangiogenesis.

Expression of VEGFR-3 positive tumors represents an independent prognostic factor for both overall and recurrence-free survival in surgical resected patients with iCCA. Also, VEGFR-3 positive expression favors lymph node metastasis and tumor recurrence through tumor-associated lymphangiogenesis. Due to limited number of patients and retrospective nature, our study calls for validation by multicenter studies.

We express appreciation for language help and writing assistance from Xiao-ni Kong and manuscript revising from Qiang Xia.

This work was supported by the National Natural Science Foundation of China (81472234, 81670598) to Qiang Xia, and the Shanghai Health Bureau Key Joint Efforts Foundation (2013ZYJB001) to Qiang Xia.