Epidermal growth factor receptor (EGFR), a cancer-driven gene, plays an important role in tumorigenesis of lung cancer. Cryptotanshinone (CT) is the main constituent of salia miltiorrhiza and has been found to affect tumor progression. However, the mechanism of CT on lung cancer is still not clear. Here we found that CT could suppress the proliferation of non-small cell lung cancer (NSCLC) by inhibiting EGFR. We further confirmed that knockdown of EGFR also suppressed cell proliferation and arrested cell cycle progression. Furthermore, we evaluated EGFR was a direct target gene of miR-146a-5p which was upregulated by CT. In general, our results proved that CT could restrain NSCLC via miR-146a-5p/EGFR axis. CT and miR-146a-5p have the potential to be positive candidates in drug development of NSCLC.

Lung cancer is the most deadly malignancy in the last decade, accounting for about 1.6 million deaths every year globally [1-3]. Almost 85% of lung cancers are non-small cell lung cancers (NSCLC), and 5-year survival rate is about 15% [4, 5].

Epidermal growth factor receptor (EGFR), a receptor tyrosine kinase, plays important roles in cell proliferation, survival, migration and apoptosis, and has been found to be positively involved in tumorigenesis [6, 7]. Overexpression or mutation of EGFR can be observed in about 30% of solid tumors [8], including glioblastoma [9], lung cancer [10] and breast cancer [11]. EGFR-targeted therapy is the most promising treatment for NSCLC currently [12-14], and up to now three generations of EGFR tyrosine kinase inhibitors (EGFR-TKIs) have been developed and applied [15-18]. However, with the progression of treatment, the emergence of drug resistance has become a tough problem [19-22]. EGFR L858R/ T790M/C797S mutations can develop resistance to almost all existing EGFR-TKIs [23]. Therefore, it is urgent to find a new EGFR target for lung cancer treatment.

Tanshinones are the main functional components of salvia miltiorrhiza which is widely used in traditional Chinese herbal medicine for many years [24]. Cryptotanshinone (CT), tanshinone IIA (T2A) and tanshinone I (T1) are liposoluble monomers of Tanshinones [21]. It has been found that CT could restrain prostate carcinoma, rhabdomyosarcoma and breast carcinoma cells by inhibiting the phosphorylation of Retinoblastoma and downregulating the expression of cyclin D1, which may be related to suppression of mammalian target of mTOR signaling pathway by CT [25]. Furthermore, some studies have found that CT could inhibit lung cancer by down-regulating the IGF-1R/PI3K/Akt signaling pathway and promoting pro-death autophagy [26, 27], and could reverse cisplatin resistance in lung cancer cells [28]. Our hypothesis is that CT can inhibit lung cancer via suppressing EGFR.

In our previous work, we found that tanshinones can upregulate some microRNAs (miRNAs), such as miR-32 and miR-137 [29, 30]. MiRNAs, a kind of noncoding RNA, can specifically bind with their target genes to regulate their expression and cause tumorigenesis [31-33]. In addition, it has been found that some miRNAs could inhibit EGFR signaling pathway and provide candidates for EGFR-targeted therapy [32, 34, 35]. Moreover, studies have shown that miR-146a-5p can influence prostate cancer therapy and inhibit apoptosis of breast cancer cells by FOXP3-miR-146a-NF-κB axis [36]. Zhang et al. showed miR-146a-5p plays a vital role in lung carcinogenesis [37]. Here we verified that CT can inhibit NSCLC via miR-146a-5p/EGFR axis. CT and miR-146a-5p have the potential to be positive candidates in drug development of NSCLC.

Cells were counted with blood counting chamber after transiently transfected, then 2000 and 600 cells per well were used for cell counting kit-8 (cck-8) and colony formation assays respectively. Cell cycle analysis, 1×105 cells were collected and absolute ethyl alcohol was added slowly to reach 70% and were stored at -20˚C overnight. The cells were precipitated with 25μl of FBS, suspended with RNase A (100 ng/mL) for 25 min at 37 ˚C, and dyed with PI (50 ng/mL) at 4 ˚C for 15 min. A MoFlo XDP flow cytometer (Beckman Coulter, USA) was used to analyze cell cycle distribution of samples and Flow Jo software was used to analyze data. Each experiment was repeated at least three times independently.

Cells were collected and suspended with lysis buffer containing protease inhibitor, blown up and down for 10 min, then centrifuged at maximum speed for 10 min at 4 ˚C. Save supernatant (cytosolic fraction) if desired, washed sediment with 500 μL ice-cold lysis buffer. Then added 3 folds volumes nuclear extraction buffer for 30 min on ice, centrifuged at maximum speed for 10 min at 4 ˚C and saved supernatant at -80 ˚C. Total protein was extracted and quantified, then we used SDS-page to resolve protein (30 μg) and transferred it to PVDF membranes (GE Healthcare, USA). The membrane was blocked with 5% powdered milk in room temperature for 1 h, then incubated with primary antibody (1:1000) at 4°C overnight. After washed with TBST three times and incubated with a secondary antibody (1:10000, CST, USA) for 2 h, we used a chemiluminescence developer (Millipore, USA) to detect protein bands and imaged by chemiluminescence image analysis system (Tanon, Shanghai, China). Each experiment was repeated at least three times independently.

According to our prediction, the 3'-UTR of EGFR which contains the predicted binding site of miR-146a-5p, and 3'-mUTR of EGFR, the predicted binding site was point mutated, were respectively inserted into the pGL3 vector (Promega, USA) with molecular cloning techniques, and named pGL3-EGFR WT 3′-UTR (EGFR-3′-UTR) and pGL3-EGFR mut 3′-UTR (EGFR-3′-mUTR). Then NC or miR-146a-5p mimic, renilla luciferase plasmid (pRL, Promega), and 24 well plate number of 50% confluent HEK293T cells were transiently co-transfected with EGFR-3'-UTR or EGFR-3'-mUTR vector. 48 h after transfection, an Orion II Micro-plate Illuminometer (Titertek-Berthold, USA) was used to detect luciferase activity of cells. The difference of relative activity was identified by t-test.

NSCLC cells were transiently co-transfected with p2k7 of EGFR expression vector (p2k7-EGFR) or p2k7-GFP as well as miR-146a-5p mimic or NC mimic using lipofectamine 2000. 24 h after transfection, transfection effects were detected by qRT-PCR and western blot. Subsequently, related functional experiments were carried out. Each experiment was repeated at least three times.

The experimental data was expressed as group mean value ± SEM, differences were evaluated by using t-tests for 2-group comparison, and figures were made using GraphPad Prism 5 software. Differences were considered statistically significant when p< 0.05.

In our previous work, we have validated that tanshinones could target AURKA in NSCLC cell lines [29]. We first verified the effect of CT on NSCLC cells, and we treated cells with 5µM CT and detected cell proliferation after 24 h, 48 h, and 72 h, and cell proliferation was significantly inhibited in H1299, HCC827 and A549 cells (Figure 1A-C). And then we explored the mechanism that tanshinones inhibited NSCLC, we found that EGFR could be a key cancer-driven gene which is associated with CT. We measured the expression of EGFR in cells after incubated with 5µM CT 48h. The data showed that the mRNA level of EGFR in H1299 and HCC827 cells was significantly decreased compared with control group (DMSO for 48 h) (Figure 1D) and the protein expression level was also downregulated (Figure 1E-F). The results suggested that CT may affect NSCLC by inhibiting the expression of EGFR.

In order to study the function of EGFR in NSCLC, EGFR was knocked down by siRNA transfection in H1299 cells. After transfection with siEGFR, the mRNA level of EGFR had almost 50% decrease compared to the control (Figure 2A). After transfection, the protein level of EGFR was also significantly decreased (Figure 2B-C). Then associated phenotypic experiments were performed in H1299 cells, and results indicated that downregulation of EGFR inhibited cell proliferation and clone formation, as well as arrested the cell cycle progression (Figure 2D-F). These results demonstrated that downregulation of EGFR had the similar effects of CT treatment in NSCLC cells. 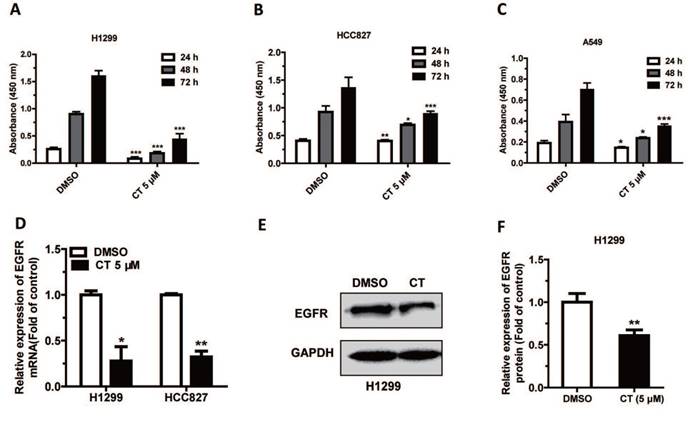 EGFR is a direct target of miRNA-146a-5p

In this study, we tried to figure out whether some miRNAs are involved in CT's regulation through targeting EGFR. According to Targetscan (http://www.targetscan.org/vert_72/) software prediction of EGFR, we found miR-146a-5p might potentially target EGFR. Subsequently we used miRTarBase (http://mirtarbase.mbc.nctu.edu.tw/php/index.php), TargetScan, miRPathDB (https://mpd.bioinf.uni-sb.de/overview.html), and miRWalk 3.0 (http://mirwalk.umm.uni-heidelberg.de/) to predict target genes of miR-146a-5p, and EGFR was selected (Figure 3A). Then, EGFR 3'-UTR vector and EGFR 3'-mUTR were transfected into H1299 cells as descried previously to verify whether EGFR is a target gene of miR-146a-5p (Figure 3B). The relative luciferase activity in HEK293T cells which were co-transfected with miR-146a-5p mimic, EGFR 3'-UTR and pRL vector, had a significant decrease compared to control (Figure 3C). While, after co-transfection with miR-146a-5p, EGFR 3'-mUTR and pRL vector, the relative luciferase activity in HEK293T cells did not have significant change (Figure 3C). We also detected that the expression level of EGFR mRNA and protein were significantly downregulated after transfection with miR-146a-5p mimic in H1299 and HCC827 cells (Figure 3D-F). All results showed that EGFR was a direct target of miR-146a-5p. 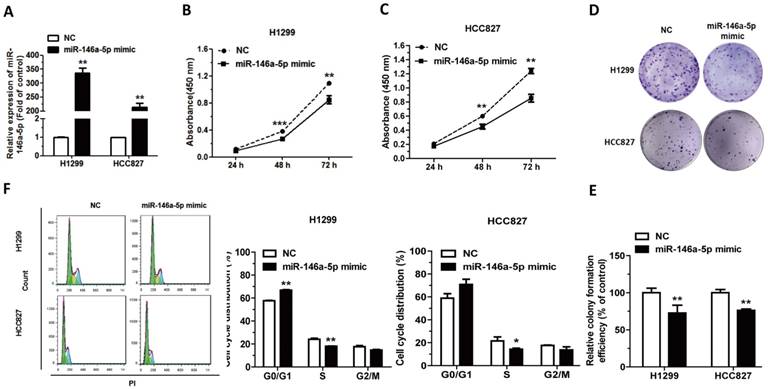 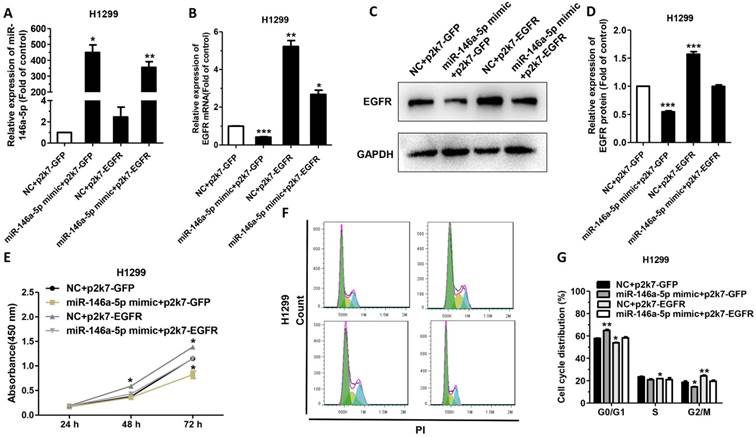 In recent years, more and more tanshinone drugs are developed for the treatment of anti-bacterial, anti-inflammatory and angina pectoris [39]. In our previous study, we tried to explore the antitumor function of tanshinone monomers in vivo. We treated xenograft tumors in mice by intragastric administration of T1 and T2A, and the data proved that T1 and T2A significantly inhibited tumor growth. Herein, we found that CT which significantly suppressed NSCLC and CT might be an efficient candidate for the drug development of NSCLC. Then, we further proved the interaction among CT, miRNAs and EGFR, and defined the relationship between EGFR and miR-146a-5p in NSCLC (Figure 7). 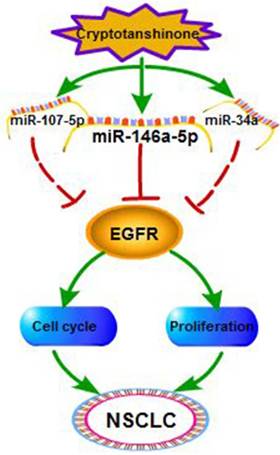 Lung cancer is strongly related to status of EGFR, which is an important target for cancer therapy in precision medicine era. However, the emergence of drug resistance forces us to search for a variety of EGFR targeted therapies. At present, the study of miR-34a as a therapeutic drug for NSCLC has entered the stage of clinical stage I [42]. Studies also found that let-7 and miR-34a could inhibit NSCLC in collaboration with a new generation of EGFR-TKIs, Erlotinib [43]. Our findings could lead to further understanding of the function of miRNAs in lung cancer. These results indicated miR-146a-5p was a significant tumor inhibitor which might be developed as a drug in the treatment of NSCLC or in combination with EGFR-TKIs.

In conclusion, our study showed that CT suppresses NSCLC via miR-146a-5p/EGFR axis. Further investigation is required to determine whether CT and miR-146a-5p can as drugs play vital roles in organisms.

We are grateful to Professor Xin Lin (Tsinghua University, China) for giving us p2k7-EGFR plasmid. The work was funded and supported by the national natural science foundation (No. 91543123 and 81601887).

19. Niogret J, Coudert B, Boidot R. Primary Resistance to Afatinib in a Patient with Lung Adenocarcinoma Harboring Uncommon EGFR Mutations: S768I and V769L. Journal of thoracic oncology: official publication of the International Association for the Study of Lung Cancer. 2018;13:e113

22. Yu HA, Arcila ME, Rekhtman N. et al. Analysis of tumor specimens at the time of acquired resistance to EGFR-TKI therapy in 155 patients with EGFR-mutant lung cancers. Clinical cancer research: an official journal of the American Association for Cancer Research. 2013;19:2240-7